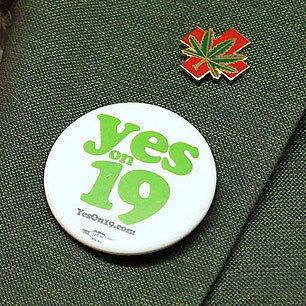 Proposition 19 — the California ballot measure that would have legalized marijuana possession and cultivation — has gone up in smoke.

The initiative, which led in the polls through much of the summer, fell flat everywhere in the state but in the Bay Area, and among every demographic group except the under-24 set — who backed the measure 62-38 but didn’t turn out in force to propel its passage.

This is a painful blow to cannabis activists who intended the measure to upend the War on Drugs. But it’s hardly a total loss.

Prop 19 actually provides a textbook lesson in “If the people lead, the leaders will follow.” Strong public support for legalization gave the state legislature and the Governator cover to decriminalize marijuana a month ago. In early October, they overhauled California law so that there’s no longer any sanction for possessing up to an ounce of marijuana. Smoking dope is now an infraction — like a parking ticket. No felony. No misdemeanor. If you get hassled by a cop, the worst thing that’ll happen to you is you have to pony up a $100 fine.

The trouble with this decriminalization move as far as Prop 19 was concerned is that the initiative’s campaign had been centered on the injustice and waste of law enforcement resources involved in treating cannabis smokers like criminals. Decriminalization scratched that itch for the mid-term electorate — which skews older and more conservative.

Is this the result the backers of the so-called Oaksterdam Initiative — named for the marijuana trade school whose founder bankrolled the ballot measure — were looking for? Surely not. But it’s real and immediate progress — the sweet smell of which will surely be in force Wednesday at the tickertape parade celebrating the state’s favorite stoner baseball hero, Tim Lincecum.

–What we really learned from the midterms