The Bureau of Labor Statistics just released the employment and unemployment results for May and the picture ain’t pretty: the pace of job creation has once again slowed significantly.

Job growth for May came in at only 69,000 jobs, the worst month in a year, and unemployment ticked up to 8.2 percent, though largely because more people came back into the job market. And, just to twist the knife a little bit deeper, April’s already weak jobs number was revised downward, from 115,000 to 77,000. 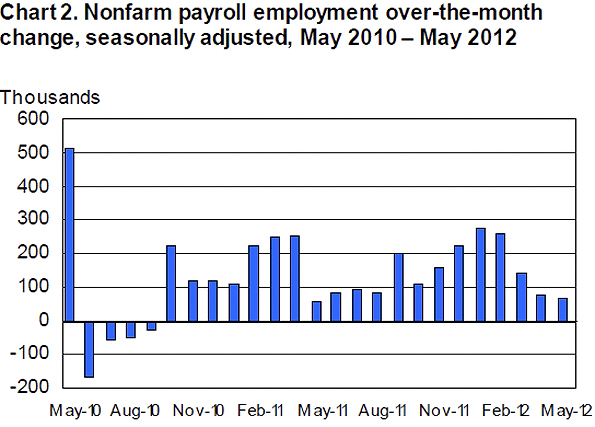 Bottom line: The job market is simply not providing workers with the employment and earnings opportunities they need to get ahead.  This obviously is bad news for American families, but it also threatens the economy writ large.  If this pace of job growth sticks, we’re looking at a slowdown from a growth rate that’s already too sluggish.

So one big question is — will it stick?  It’s always possible with these monthly reports that some statistical quirks are in play.  A candidate in this case is weather effects, as unseasonably warm weather last winter probably moved job growth that might be expected to occur in May to earlier months. If so, that would imply that taking an average of more months of data would give you a more accurate read on the true underlying pace of growth.  Over the last six months, net monthly job gains have been 174,000, so a lot depends on whether the current weak trend keeps up.

Another important question: Why? Why is job growth slowing? I see a lot of reports today blaming Europe, China, and other external factors. And sure, European instability and a slower growing China are part of the problem.  But they are not at its core.

The main economic reason the job market is once again slumping is a lack of fiscal stimulus. The economy in general, but especially the job market, has never reliably achieved “escape velocity,” i.e., consistently high enough growth rates that would set off the virtuous growth cycle of more jobs leading to more incomes, more consumption, which feeds back into greater demand, more jobs, etc. There’s not enough demand in the economy; businesses and consumers aren’t shelling out enough, so government needs to step in and temporarily pick up the slack – by, yes, spending. This it has failed to do.

The President proposed the American Jobs Act back in September of last year precisely to provide such stimulus, but it went nowhere, thanks to dysfunctional Congressional politics – the same dysfunctional politics that daily undermines our economic recovery, via talk of going over the fiscal cliff, threats of another debt ceiling fight, or failure to preserve extended unemployment insurance benefits for hundreds of thousands of jobless people.

We shouldn’t be surprised. This is what happens when politicians come to Washington not to solve our immediate pressing problems, not to compromise, but to promote, above the public interest, a narrow political agenda– regardless of harm this does to millions of Americans who’ve already suffered too much.