In Charlottesville on Saturday, after the city council and Virginia governor declare a state of emergency and police disband the Unite the Right rally organized by white supremacists, I am following a growing group of demonstrators against the rally, who have begun marching east down Water Street, the southern perimeter of the city’s historic downtown mall. Just a few blocks from Emancipation Park, where the white supremacist rally had been scheduled, the marchers appear nonviolent but raucous, chanting, “Whose streets? Our streets!” and holding signs like, “Nazi carpetbaggers go home.”

Moments later, the crowd hears a loud, sharp thud. People start screaming and running north, up 3rd and 4th streets to Main Street, a seven-block pedestrian-only stretch of restaurants, shops, and bars. On a typical summer Saturday, this historic Virginia city would be teeming with families and tourists, but today it is filled with police officers in riot gear, who form grim lines to block pedestrians’ access to various points along the mall. But it is becoming increasingly clear that they seem nearly immobile in their posting, slow or non-responsive to the skirmishes that are breaking out along the many side streets along the mall, where both rally goers and protesters linger, despite the state of emergency.

Meet the Alt-Right 'Spokesman' Who's Thrilled With Trump's Rise

Meet the Alt-Right 'Spokesman' Who's Thrilled With Trump's Rise

The atmosphere around the mall was already thick with apprehension, as anti-racist protesters and Charlottesville locals peered down side streets, looking for the roving bands of white supremacists who seemed to pop out of nowhere, with little reaction from the police. Shortly before the car ramming, I see a man marching with the National Socialist Movement, a neo-Nazi group, punch a black woman who had thrown ice from her cup at him. Bystanders intervene, but the police do not respond. In a parking lot a few blocks off the mall on South Street, ambulances are pulling away as anti-racist protesters are still confronting heavily armed men, sitting in and around a pair of pick-up trucks while police look on.

Unlike other events I’ve covered where anti-fascist protesters face off with white supremacists, the police make no effort to cordon the two groups off from each other to prevent violent clashes before they happen. At a neo-Nazi rally in Harrisburg, Pennsylvania, just days before the November election, police employed this tactic with success – while the rally attendees and anti-fascist protesters taunted each other over a barrier of police, they were blocked from coming into physical contact.

But in Charlottesville, the police inaction creates a sense of pandemonium. As word spreads that a car has rammed into the crowd, there is rising fear, confusion, and anger. On Main Street, where the riot police are staged just a block away from the horror, witnesses are imploring the police to act, people are crying, and a man shouts repeatedly, “This is what terrorists do.”

Nineteen people are hospitalized, and one has died: 32-year-old Heather Heyer.

The police later arrest 20-year-old James Alex Fields Jr., of Maumee, Ohio, and charge him with second-degree murder. Later, photos emerge of him marching with Vanguard America, which the Anti-Defamation League describes as a “white supremacist group that opposes multiculturalism and believes America is an exclusively white nation” and that “is particularly focused on recruiting young men and has engaged in unprecedented outreach efforts to attract students on American college campuses.” (Vanguard America denies any ties to Fields, according to the New York Times.)

Fields’ mother, Samantha Bloom, tells the Toledo Blade that her son told her he was going to an “alt-right” rally in Virginia. “I thought it had something to do with Trump,” she tells the Blade.

She isn’t the only one. David Duke, the former Klan leader who told his radio audience in February 2016 that not voting for Trump was “really treason to your heritage,” is in Charlottesville on Saturday, again pinning white supremacist hopes and dreams on the President of the United States. The rally, he says to reporters, “represents a turning point for the people of this country. We are determined to take our country back. We’re going to fulfill the promises of Donald Trump. That’s what we believed in, and that’s why we voted for Donald Trump.” 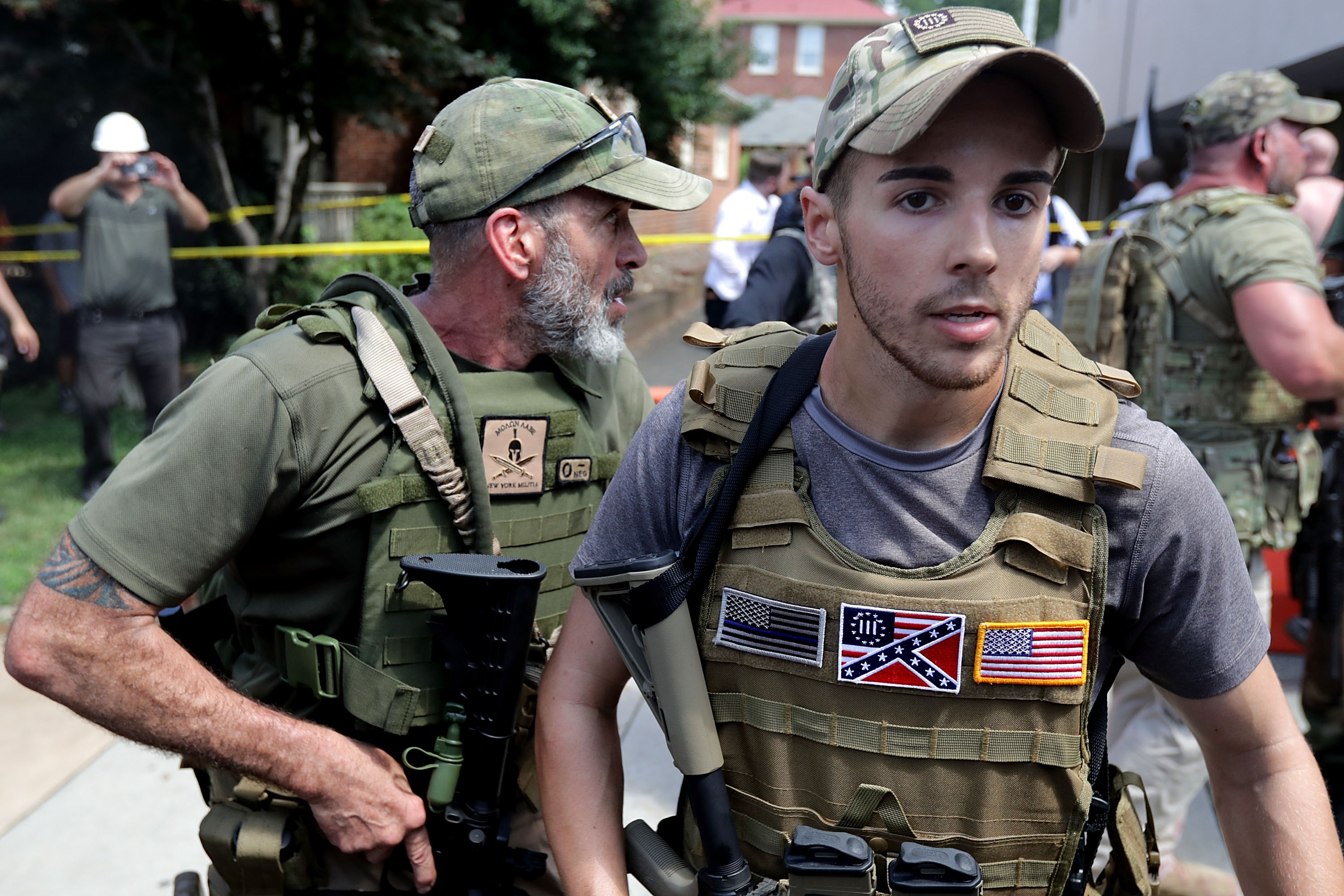 The unfolding events over the course of the morning prompts pressing questions for the president, which he is slow to answer: Will the President of the United States, so quick to condemn terrorism allegedly committed by Muslims, so quick to attribute all terrorism to Muslims, say anything about the car attack? Will he distance himself from what Duke has said about his own role in energizing white supremacists? Will the President of the United States, who thrilled white supremacists early in his campaign when he retweeted a graphic of statistics that falsely claimed that blacks commit the majority of crimes, and who frequently relished describing America’s inner cities as crime-infested hellholes, say anything about the lawless dystopia Charlottesville has become after white supremacists descended on it?

Trump, though, was true to form: In his afternoon statement about what was happening in Charlottesville, he says nothing about racism, white supremacy, or even the fact that one of the country’s most notorious racists had publicly linked him to their cause. During his campaign, Trump would only condemn Duke after being pressed repeatedly about it, finally saying, blandly and without offering evidence, “David Duke is a bad person who I disavowed on numerous occasions over the years.”

On Saturday afternoon, after the country watched white supremacists amass on the streets of Charlottesville, and street brawls break out between them and some anti-fascist protesters, Trump condemns “this egregious display of hatred, bigotry and violence on many sides,” adding, “on many sides.” (When a reporter later asked a senior White House official why Trump didn’t condemn the neo-Nazi march in Charlottesville, he reportedly responded: “”What about the leftist mob. Just as violent if not more so.”)

It was the white supremacists who, in what was declared an “unlawful assembly” disbanded by Charlottesville police on Friday night, marched on the University of Virginia campus with torches, chanting “white lives matter,” “you will not replace us,” and the Nazi slogan “blood and soil.” It’s an alt-right tactic that has become familiar: deploying a terrifying and enduring symbol of violence against people of color, or against Jews, and defending their actions by saying it was a fun way of energizing their movement.

On Saturday, Richard Spencer, the president of the white nationalist National Policy Institute, who popularized the term “alt-right” to describe a movement that advocates for a “white ethno-state,” depicts the Friday night torch march as an “amazing, spectacular demonstration” (Steve Bannon, Trump’s top strategist, has boasted that as head of Breitbart News, he provided “the platform for the Alt-Right.”) The Alt-Right has marched with torches before, at a previous demonstration in Charlottesville in May. “I love the torches,” Spencer tells Rolling Stone. “It’s spectacular; it’s theatrical and mystical and magical and religious, even.”

Last year, less than two weeks after Trump won the presidential election, Spencer made headlines when audience members at his Washington, D.C. conference made Nazi salutes after he punctuated a speech with: “Hail Trump! Hail our people! Hail victory!” He later said the salutes were “in the spirit of fun.”

And on Saturday night, Spencer and his minions are having fun again. In the evening, Spencer tells me the alt-right is having a party, celebrating what they consider to be a successful day. “Everyone is in a really good mood” because despite the rally getting shut down, they demonstrated their “resolve.” He vows that because, in his view, the authorities prevented them from having their rally and the police “were doing the opposite of their job, the police promoted violence,” he will organize another rally in the city.

“I think we’re going to have to come back to Charlottesville,” he says.

Despite Spencer’s claims that his group was attacked by members of Antifa, a loose, anarchist movement of anti-fascist protesters that has clashed with the alt-right in other cities, many of the rally opponents in Charlottesville were religious liberals, Black Lives Matter activists and others who showed up to protest racism and white supremacy. The visible religious presence includes clergy and congregants who march, offer people food and water, and set up space at the First United Methodist Church for people to seek respite. In the parking lot, people link arms and sing, “We Shall Overcome.”

Alex Vishio, the Acting Associate Conference Minister of the Central Atlantic Conference of the United Church of Christ, says members of the UCC church in Charlottesville “helped organize the resistance to the alt-right rally.” Along with other clergy and religious activists, Saturday morning Vishio was perched at First United Methodist, where he says he saw fights break out in Emancipation Park as white supremacists gathered for their rally, purportedly to protest the impending removal of a statue of Confederate leader Robert E. Lee, before the police shut the rally down.

And while there were certainly Antifa protesters who carried sticks and clubs, others were not armed, and say they were attacked by white supremacists. Renee, who declines to give her last name, has a long, deep vertical gash on her forehead, which she tells me she received by being “clocked” by a wooden shield wielded by a “Nazi;” she describes a shield like the one carried by the Vanguard America group.

John Carico, and Antifa organizer from Chattanooga, Tennessee, who is with Renee, has for four years protested outside the annual meeting of American Renaissance, a white supremacist group that rents a rural Tennessee venue for its conference, says he was also attacked. He says his group was chanting, “no hate, no KKK, no fascist USA.” The group that attacked them, he says, was chanting, “Jews will not replace us.”

This weekend in Charlottesville appeared to be the largest – and most violent – public gathering the white supremacist alt-right has had thus far. But Trump, who reportedly thrills to chaos and conflict, can’t muster the words to condemn racism, white nationalism, or the alt-right. No surprise there – he did the same thing during his campaign, winking and nodding with the Alt-Right through tweets, retweets, dog-whistling, and half-hearted disavowals.

In other words, Trump is the president he signaled he’d be – the one who emboldened the alt-right, and then stood by while they wreaked havoc on America.

Update: When asked to respond to criticism of the police response to the rally, Charlottesville Chief of Police Al Thomas issued this statement:

“Law Enforcement did respond to and break up various fights in and around Emancipation Park prior to the unlawful assembly declaration. Once the unlawful assembly was declared, we gave people sufficient opportunity to disperse. When circumstances warranted, our officers moved back into the park to address those who had not complied. Law Enforcement and National Guard personnel were staged throughout the City for the remainder of the day for comprehensive response, answering approximately 250 calls for service as well as addressing issues they observed or were asked to assist with by the public.”