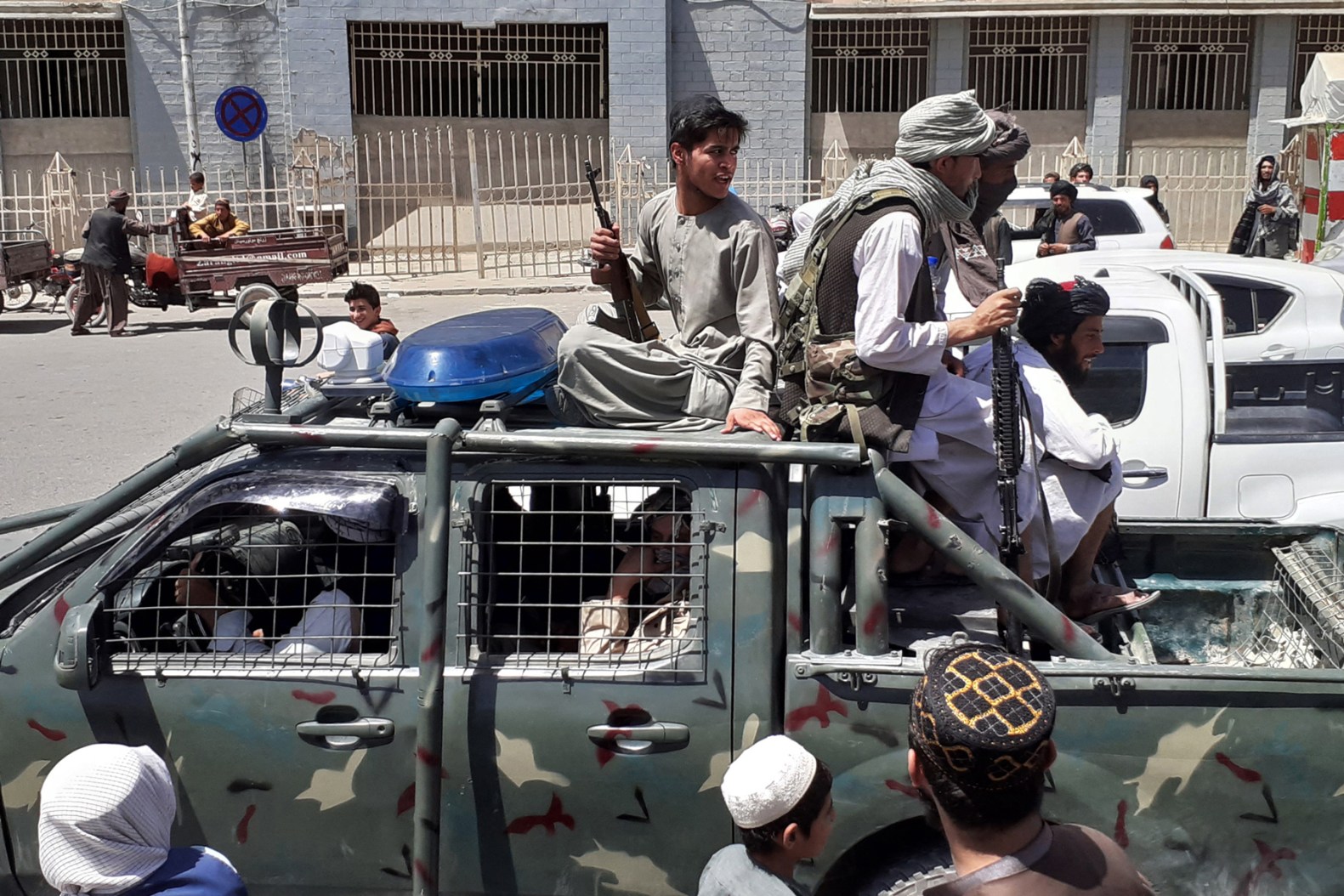 Two decades, trillions of dollars, and hundreds of thousands of lives after the United States ousted the Taliban from power following 9/11, the Islamic militant group has retaken control of Afghanistan.

Afghan President Ashraf Ghani fled the nation on Sunday as Taliban insurgents entered the capital city of Kabul, marking the collapse of the government the U.S. spent the past 20 years attempting to remake. As the Taliban moved into Kabul, officials said they expect a complete transfer of power, Reuters reported, and Afghan political leaders are working with the Taliban to try to ensure the transition is peaceful.

Images via Al Jazeera of the Taliban inside the presidential palace in Kabul. pic.twitter.com/UzNEPUf6Cb

The collapse of the Afghan government comes after a week in which the Taliban escalated its months-long offensive across the nation, seizing several key provinces, districts, and cities in rapid succession, and forcing thousands of civilians to flee. Insurgents took control of Lashkar Gah, Herat, and Kandahar, Afghanistan’s second-largest city, on Friday, leaving Jalalabad, Mazar-i-Sharif, and the capital of Kabul as the only major cities still under government control. Mazar-i-Sharif was taken early on Saturday, giving the Taliban full control of northern Afghanistan. Jalalabad fell later in the day. Ghani fled on Sunday as insurgents moved in on Kabul.

The Taliban held outside Kabul early on Sunday, saying they wanted a “peaceful transfer,” before armed insurgents moved into the city. Helicopters hovered over Kabul all morning, waiting to remove personnel from the U.S. embassy. The Afghan citizens who have packed into the capital city as the Taliban swept through the rest of the nation didn’t have the luxury of an aerial evacuation. “The effect here on the ground is just one of absolute panic and chaos,” CNN’s Clarissa Ward reported from Kabul on Sunday. “Real gridlock on the streets, unbelievable, choked with traffic. People with luggage hanging out of their windows, trying to get out of the city.”

Not long after the Taliban entered Kabul, the U.S. embassy suspended all consular activities while instructing U.S. citizens to shelter in place. The security alert noted reports that the Kabul airport was under attack. CNN reported that the American flag above the embassy had been taken down. The State Department announced late on Sunday that the evacuation of the embassy had been completed and that all personnel were on the premises of the airport, which had been secured by the U.S. military.

More of Kabul in a grid lock. Bystanders told me they are gathering outside to see if today’s the day that Taliban would roll into Kabul and take over. One woman named Shakila tells me: “today is the end day of our lives” pic.twitter.com/Dv6jbGNFqr

The Taliban started to escalate its offensive in Afghanistan in 2020, after the Trump administration committed to a full withdrawal of U.S. troops by May 1st of 2021. Their efforts accelerated after President Biden announced earlier this year that he was delaying the deadline to August 31st. The Taliban had been expanding its control of Afghanistan ever since, culminating with the past week’s furious offensive that saw the militant group seize every major power center in the nation with little resistance.

Biden blamed Trump in a statement released on Saturday. “When I came to office, I inherited a deal cut by my predecessor — which he invited the Taliban to discuss at Camp David on the eve of 9/11 of 2019 — that left the Taliban in the strongest position militarily since 2001 and imposed a May 1st, 2021 deadline on U.S. forces,” the president wrote.

Biden, however, has stood by the decision to remove troops from the nation as the Taliban forced the Afghan government to its breaking point. On Tuesday, he put the onus on the Afghan forces to ward off the Taliban insurgents and preserve the nation’s government. “We spent over $1 trillion over 20 years,” the president said during a news conference. “We trained and equipped with modern equipment over 300,000 Afghan forces, and Afghan leaders have to come together. We lost thousands, we lost to death and injury, thousands of American personnel. They’ve got to fight for themselves, fight for their nation.”

A day after Biden’s plea for the Afghan military to fight the Taliban, it was reported that some U.S. officials didn’t expect the Afghan government to last more than 90 days, with others projecting it could fall within a month. The fact that it took only days underscores how drastically the U.S. overestimated the resilience of the government it spent 20 years building, and underestimated the Taliban’s ability to topple it. Just last month, Biden said that “the Taliban overrunning everything and owning the whole country is highly unlikely.”

Biden reiterated his support for the withdrawal on Saturday as insurgents moved in on Kabul and the government’s collapse neared. “One more year, or five more years, of U.S. military presence would not have made a difference if the Afghan military cannot or will not hold its own country,” Biden wrote in a statement, in which he also authorized the deployment of 5,000 troops to Afghanistan “to make sure we have an orderly and safe drawdown of U.S. personnel and other allied personnel and an orderly and safe evacuation of Afghan troops during our mission and those at special risk from the Taliban’s advance.”

Since the spring, thousands of Afghan civilians have fled their homes as Taliban insurgents have expanded control over city after city. The situation is turning into a humanitarian catastrophe. Food is scarce and the streets of Kabul have been filled with civilians who fled other cities taken over by the insurgents. People are sleeping in the streets, abandoned warehouses, and makeshift camps set up on the city’s outskirts, according to the BBC. The United Nations announced that 1,000 Afghan civilians were killed in the past month alone, and that more than 250,000 people — 80 percent of whom are women and children — have fled the country since the end of May.

The situation stands to get worse once the Taliban assumes control, with many fearing a return to the Islamic extremism that characterized the years before the U.S. ousted the group from the nation following 9/11. Women are especially vulnerable. When the Taliban ruled Afghanistan from 1996-2001, women were forbidden from receiving an education, prohibited from working, deprived of health care, and not allowed to leave their homes without a male to escort them. Conditions for women remained harsh during the U.S. occupation, but many rights were restored. Girls went to school in increasing numbers, health facilities were constructed, and according to data from the World Bank, female life expectancy rose by 10 years from 2001 to 2017. This progress could now be undone. “I feel we are like a bird who makes a nest for a living and spends all the time building it, but then suddenly and helplessly watches others destroy it,” Zarmina Kakar, a 26-year-old women’s rights activist in Kabul, said recently as the Taliban bore down on the city, according to the Associated Press.

The 20-year war in Afghanistan, the longest in American history, is estimated to have cost over $2 trillion while resulting in the death of over 240,000 people, including more than 2,400 U.S. service members, according to a study by the Costs of War Project. The U.S. put so many resources into strengthening Afghanistan’s government and military precisely so it could sustain itself in the face of aggression from insurgents. The Taliban toppling this government and seizing power before the U.S. could even finish withdrawing from the region cements the war in Afghanistan as one of the most catastrophic failures in the history of U.S. foreign policy.

This is a developing news story and will continue to be updated.