The year of our Lord 2015 was bad, and 2016 will be worse. I know this on a personal level, because someone asked me what some of my more serious work was in 2015, and almost all were essays about different mass shootings. But this isn’t about me. On a universal level, we’re all a year closer to dying. You might have started dating a good person, but they’re going to die too, and that job you like now will hound you to your grave, especially if you’re a ditch digger or practice the mortuary arts.

It is with that grim can-do spirit that I ask you to join me now in hauling out the bodies while they’re still warm. 2016 will be dead soon enough, and it’s going to take a lot of people with it, so we might as well get started.

1. We’re going to keep fucking up the planet.
We’ve only got one, but we keep treating it like there’s an extra in a box in the garage. Obama can sign all the climate accords he wants, but America’s wallet is still controlled by a conservative-dominated Congress whose climate ideas amount to, “If global warming is real, why is it cold?” We’ve reached the point where doing anything is a huge accomplishment, but when our big-deal benchmarks amount to half measures, it’s like getting your car interior detailed 72 months after your last oil change.

How to Respond to the Latest Mass Shooting

2. If you’re middle aged and your favorite childhood musical artist creates anything during this calendar year, it will be bad.
Nostalgia is a powerful force. Just enough pastiches of songs you liked or callbacks to beats, guitar tones or vocal tricks that amped you up can make you convince yourself that this new thing is good. This can even catch you early: I spent a teen year trying to trick my brain into thinking The Division Bellwas an OK album instead of doing better things with it, like nitrous.

There are artists who are exceptions to this, of course, but a small enough number to prove the rule without overturning it. Most artists run out of ideas after a decade or so of success, or they move on to bad ones for virtue of novelty. And there you are, trying to recreate the adulation and wonderment you could feel as a teenager, wanting to touch that vitality so much that you’ll argue yourself into this record even as your soul knows it’s the sonic equivalent of a girdle or spray-on hair.

This category is mostly just shooting barreled fish with a howitzer, but this is the only way I could think of preemptively coping with the fact that Luke Haines is probably going to release another 40 minutes of him rasp-talking over four songs of “concept album,” eight tracks of “things he remembers from being a kid” and one good guitar riff instead of releasing another Now I’m a Cowboy.

3. We’re not going to get any less racist or sexist anytime soon.
The biggest flaw in Star Trek: The Next Generationwas always the idea that racism, sexism and classism would somehow vanish even with 350 years and a post-scarcity economy. Like post-scarcity could even start to address our problems. I refuse to believe the State of Texas would ever join the United Federation of Planets. “Sure, I get everything I need, but I have to sleep on a foam roll in foil Hammer pants? Fuck you, I’m rolling coal. I got a shitload of phasers in my Nemesis-class dune buggy. MOLON LABE AND HOOK ‘EM HORNS.”

To put this in a timeline, the Enlightenment — there’s a term for you — began 300 years ago, and the greatest country on earth has as one of its top contenders for the presidency a billionaire mattress seller whose principal sales pitch is that we’re all endangered by Muslims, Mexicans and Megyn Kelly’s menstruation. The rest of that man’s party differs from him only in tone. Their chief opponent will probably be a woman, after eight years of a black man’s presidency. That’s going to go extremely well even without another series of faked Planned Parenthood videos designed to take down the Recreational Vaginal-Use Complex.

On a local level, we are all at risk because a “Ferguson Effect” will cause police to stop doing their jobs if they keep being prosecuted or sued for killing unarmed black people, despite that not being part of their jobs. And on the state level, every cheapjack GOP-controlled legislature will use that “get struck by lightning while winning the Punt Pass and Kick challenge” chance of voter fraud to explore opportunities to restrict the black vote — from contracting early voting hours, unequal distribution of voting machines or precincts, unnecessary ID requirements that penalize the working poor and prohibiting third-party voter-registration drives to putting the only voter registration offices in a series of randomly changing unlabeled caves 155 miles off a dirt road from the nearest city and patrolled by wolverines.

Meanwhile, just try to be a woman with an opinion on the Internet. Seriously, give it a whirl. Register a Twitter account, identify yourself as a woman in your bio and begin commenting on popular subjects with civil women-positive statements. It should take you less than a day to collect enough unsolicited “cunts,” “bitches” or “whores” to fill out a 72-hour Al Swearengen monologue rewritten by Guy Ritchie. And if you’re one of the people who thinks this stuff is all harmless, up the stakes to win ultimate argumentative victory! Tweet your phone number and physical address. See what happens. 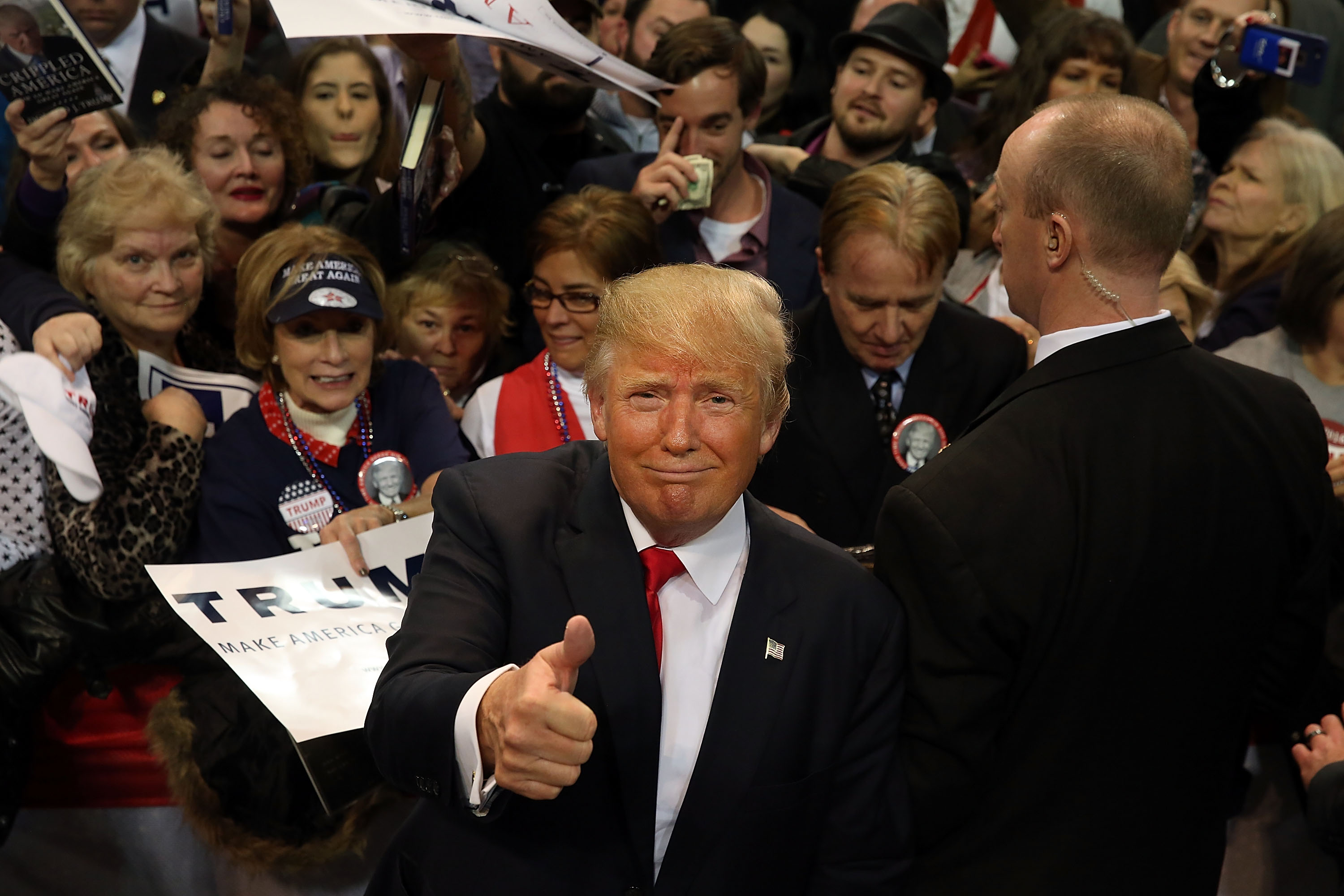 The chief task facing every political pundit is the maintenance of the illusion of wisdom, which is especially difficult since people tend to excel at being wrong. Being wrong is just easier. General laziness, confirmation bias, political and social and class biases plague everyone, and correcting for all of them requires work. The difference is that that not everyone cashes checks based on their ability to forecast changes in the American electorate.

You might think that the simple corrective to this problem would be being right, but that’s not easy even with hard work, when every presidential election year hurls out at least a half dozen probable candidates like an Oort Cloud made of farts. This is why the Sunday shows teem with people who have not memorably been correct this century. The very fact that Bill Kristol hasn’t accidentally killed himself after trying to eat packing peanuts while living on the streets offers such stunning rebuke to the concept of ever being right that we have to assume no one prioritizes it anymore. That’s because, if all probability and human frailty suggest that you will mostly be wrong, your best option is being uniquely wrong.

This is how you get pundit takes about feelings and ferment and moments. This is how you get people starting paragraphs with, “I believe the American people are ready for [amorphous condition or ideation signifying nothing].” This is how you get Marco Rubio really galvanizing the Latino population because of his name and his story, despite the ample economic/environmental/legal reasons why the majority of that population will tell him to go Operation Dumbo Drop his ass into a ravine. This is how you get this timeless sublime column from Peggy Noonan, Summoner of The Vapours, Spirits and Leadership Magicks.

It’s also how you get stuff like this turd from a New Republic writer who’s chosen as the graphical representation of himself “Actually….jpg”: 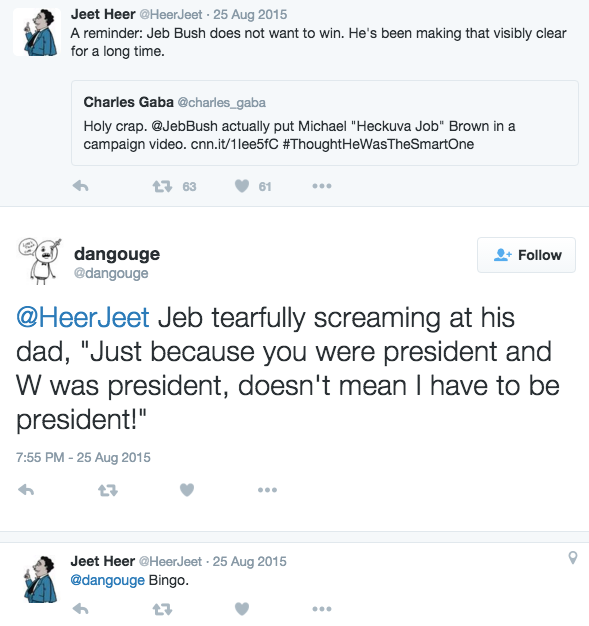 First of all, it probably seems unfair to go after a couple of tweets, but anyone who thinks that the world needs daily “Twitter essays” deserves worse, and in any event, the brevity perfectly encapsulates the armchair shrink impulse of a punditocracy that unashamedly begins TV segments with, “What’s wrong with [the candidate]?”

Anyway, this is “Hitler invaded Poland and hated Jews because he only had one ball”-level analysis, and it works because most people’s brains rightly stop at, “Wait, he only had one ball?” It doesn’t matter if this is right, because it deals in common dramatic tropes that make boring protracted things like nearly 18+ months of election season seem interesting.

Sure, Occam’s Razor might tell you that Bush already ran a bad campaign against Lawton Chiles in 1994 and is getting pummeled in a similar way now. That, when he succeeded, he enjoyed the luxury of big money and name recognition (and later, incumbency) while running in Republican-friendly off-year elections in a state 40 percent Republican and 44 percent Democrat. That he’s stained by the recent and catastrophic legacy of his brother. That he’s running a quarter-century-old establishment campaign in a landscape dotted with county clerks feted for refusing to work, arsonists, people who buy chicken sandwiches as a “fuck you,” open-carry AR-15s at the Subway in case the United Nations comes for our BMTs, and guys who yell about having the sovereign right to refuse to recognize the authority of rangers at the gates of national parks.

But you know what? Fuck that! Everyone else is going to run with that, and it’s not going to help your brand any to join the chorus, and anyway it’s way more interesting to say Bush’s got no grit, no hustle, not gonna run out a lap because deep down he’s seething with the words, Fuck you, dad. There’s Biblical shit in there! There’s epic multigenerational strife in there. There are Compsons and Buddenbrookses and Buendías in there. There’s no actual information in there, but by God there’s narrative.

Peggy Noonan wasn’t wrong when she said “no one knows anything” to lead that amazing column; she was just wrong about when she said it — the day before an election that every not-insane poll said Obama was going to win. No one knows anything (hi!), and an election season in which Donald Trump has been clouting all comers months after entering a race everyone said he was never going to enter sent a lot of people scurrying in the tall grass for their own dumbed-down Nixon Agonistes, some exculpatory story arc saying why a smart person will or won’t do something dumb, a dumb person will or won’t do something smart or why Americans will or won’t connect with the person they should have.

It requires neither accuracy nor fact; it just needs a protagonist. After you have that, you can belch out any fog of predictive psychoanalysis, then diagnose the patient’s failure to follow your prescriptions later if you need a content two-fer. If the candidate does heed you, shift blame. There are so many damnable unfaithful who refused to recognize the truth. There are great Biblical stories there too. Also the end of the second Batman movie.

Bonus predictions:
Because no one knows anything apart from the fact that 2016 will be bad, I assembled a crack team of world-class haters to help you anticipate the little things. For some people, these events will be momentous. For many others, whatever the opposite of that is. Forewarned is forearmed.

—Legislation criminalizing spoilers becomes a public conversation.
—First motion pictures based on Instagram accounts underwhelm at the box office.
—Mass surveillance rebranded as an effort to keep up with the demand for content creation.
—The man-bun will replaced by the tonsure.
—Christopher Meloni returns to SVU.
—Jesse Ventura, his work complete, finally makes the leap home.
—”I don’t have Netflix” becomes the new “I don’t even own a television” for assholes.
—Captain America: Civil War gets more media coverage than any real war.
—Trump’s poll numbers rise 10 percent after accidentally tweeting the word “cunt” at what he doesn’t realize is a man posing as a woman on Twitter.
—Retro-Geocities becomes the new trend in web design.
—Trump rally finally goes full Altamont.
—We win the War on Christmas.

What a long strange trip it’s already been!