“The early release of market-moving survey data undermines fair play in the markets,” Schneiderman said, back in the second week of July. Thomson Reuters suspended the practice of selling two-second head starts after Schneiderman insisted upon a change. Still, the firm defiantly refused to declare the change permanent and insisted that it had the right to “legally distribute non-governmental data” to “fee-paying subscribers.”

It turns out that there’s more to the story.

Back in June, journalist Simone Foxman at the global economic site Quartz reported that in addition to the two-second head start some Thomson Reuters customers were getting on the release of the University of Michigan Survey of Consumers, other customers may have been getting their data even earlier, “nearly an hour in advance” in some cases.

Rolling Stone has since learned that a whistleblower complaint has been filed to the SEC identifying 16 of the world’s biggest banks and hedge funds as the allegedly even-earlier recipients of this key economic data. The complaint alleges that this select group of customers received the data anywhere from 10 minutes to an hour ahead of the rest of the markets.

The identity of these 16 firms has not been made public yet, but sources describe the firms as major financial institutions, many of them well-known to the general public. Their inclusion in this case would significantly expand the scope of the scandal.

Contacted by Rolling Stone today, the SEC declined to comment on the status of the case.

This is a complicated story and some background is probably necessary to explain what’s going on.

The case became public thanks to a wrongful termination suit filed in April by a former Thomson Reuters employee named Mark Rosenblum. Rosenblum sold financial data for Thomson Reuters between 2005 and 2012 (he also had previously worked for the firm between 1998 and 2000). During the course of his job, Rosenblum became aware that Thomson Reuters was distributing access to a set of key economic numbers, the University of Michigan Survey of Consumers, in what he thought was an unusual fashion.

The survey, which gauges how American consumers feel about the economy, is an important indicator that financiers look at when making investment decisions about the U.S. economy. Among other things, the Federal Reserve looks at the Michigan Survey when it determines monetary policy. Any investor who knew the survey results in advance would have an inside advantage over other investors in the market.

Rosenblum learned that his employers at Thomson Reuters, who had a contract with the University of Michigan to release the data, were releasing the data in three “tiers.”

The general public would get the information at 10:00 a.m. at a certain date each month.

Ordinary subscribers to Thomson Reuters would get the data a little earlier, at 9:55 a.m. exactly.

Then there was a third group of “ultra-low latency” subscribers – algorithmic traders who use computer programs to make millions of calculations per second – who would get the data two seconds early, at 9:54:58 a.m.

This is all spelled out explicitly in the contract between Thomson Reuters and the University of Michigan, an excerpt of which was ultimately included as an exhibit in Rosenblum’s wrongful termination suit: 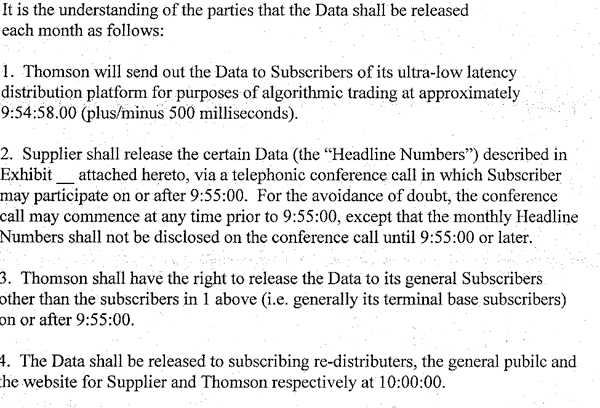 Rosenblum, when he became aware of this practice, quickly became concerned that it was improper and perhaps violated federal securities laws. By May of 2012, Rosenblum began asking his superiors about the possibility that the practice violated rules. Over the course of the next few months, he claims, he was told in various ways to stop asking meddlesome questions, among other things being informed that his inquiries would affect his bonus, and that he was “sticking [his] nose where it does not belong.”

To make a long story short, Rosenblum finally became frustrated in his efforts to get superiors to listen to his concerns, and went to the FBI on June 29th, 2012. A little over a month later, on August 3rd, 2012, he was fired.

Interestingly, about a month after Rosenblum was fired, the SEC sanctioned the New York Stock Exchange and its parent company NYSE Euronext, fining them $5 million, for somewhat similar conduct, i.e. releasing important data early to some paying customers. The SEC press release on September 14 of last year chided the NYSE for “improperly sending market data to proprietary customers before sending that data to be included in what are known as consolidated feeds, which broadly distribute trade and quote data to the public.”

In the release, SEC Enforcement chief Robert Khuzami had this to say about the practice of releasing data early:

Improper early access to market data, even measured in milliseconds, can in today’s markets be a real and substantial advantage that disproportionately disadvantages retail and long-term investors . . . That is why SEC rules mandate that exchanges give the public fair access to basic market data.

This seemed to speak directly to the issues in the wrongful-termination suit later filed by Rosenblum, who cited the quote in his complaint. Rosenblum believed that his firing violated federal laws governing the protection of whistleblowers, believing that his decision to go to the authorities was a protected act, defined by the Dodd-Frank reform law. He and his lawyers filed his suit in April. Thomson Reuters has since filed a motion to dismiss in the case, and a decision on that motion is pending.

The interesting new development is the news that a number of major financial players may have gotten an even bigger head start on the survey data than the two second jump already addressed by Attorney General Schneiderman earlier this summer. If true, it’s yet another story suggesting that the markets are a sharply uneven playing field, with the general public playing the role of suckers trading on sloppy-seconds information, while powerful insiders pay for enhanced access.

The story jibes with the research done by the reporter Foxman earlier this summer. In her article from June 10th, “More evidence that Thomson Reuters data may be leaking out earlier than it’s meant to,” Foxman pointed to a study done by the market-analysis firm Nanex. The study showed a huge early run-up in trading ahead of the release of the Michigan survey results. Specifically, Nanex saw a spike in the milliseconds before 9:54:58 on December 7th, 2012. To be exact, they saw a flurry at 9:54:57.18, nearly a full second before the “third-tier” algorithmic subscribers got their data at 9:54:58 a.m.

This is exactly what you would expect to see if someone, or a bunch of someones, had access to the data even before 9:54:58 a.m. In this game you would want to hold your cards until the last possible moment before placing your bets. Foxman quoted Nanex founder Eric Hunsader’s explanation:

“I really believe that this was a case where someone knew this [number] early,” Hunsader said in a phone interview. If you had early information, he reasons, “you wouldn’t want to take a position until really close to the release,” both because you’d want to avoid other adverse market moves ahead of the release and because investors cancel orders prior to a release, making it difficult to find someone to trade with. Hence the trading about a full second before the release. “That tells me that someone was getting as close to the trigger point as possible.”

There are disagreements as to whether or not this practice is illegal. To answer that question one would probably need to know more about how Thomson Reuters marketed access to this data, in particular whether its ordinary subscribers were made aware that other, bigger customers may have been getting data early. But certainly, if the Attorney General was concerned about a two-second head start, he would have to be similarly concerned about a 10-minute or one-hour advantage. At the very least, it raises questions about the propriety of letting big banks and hedge funds get head starts on the rest of the markets.

Thomson Reuters has denied the allegations in Rosenblum’s lawsuit and will not comment on the allegations that major customers may have received trading data up to an hour early, except to say generally that they believe these and other accusations to be “unsubstantiated” and “without merit.”

Stay tuned to this space on this story, as I’ll be reporting developments as they become available.