Women Showed Courage in 2017 - Will It Make a Lasting Difference? - Rolling Stone
×
×

One of my earliest memories of this tumultuous year was the deep breath heard round the world: a defeated Hillary Clinton taking a second to compose herself before the inauguration of Donald Trump, the politician who had bullied, threatened and menaced her throughout the election. Whatever you think of Clinton politically, or of her campaign, that deep breath resonated on a human level. How did she gird herself to sit there, so calmly, after all she’d been through?

The next day, women flooded the streets of Washington, D.C, declaring their commitment to the fight against sexism. It felt as though our shouts were the inverse of Clinton’s intake of breath – our profane and funny signs expressing everything she couldn’t say. In a sense, Clinton’s resolve that day, and the Women’s March the next, set the tone for the year to come, a year in which the spectacle of women’s courage in standing up to bullies, harassers and tyrants large and small became the main feature of “the resistance.”

It's Time to Revisit Trump's History With Women

If we’re being honest, those moments were also a sad measure of that movement’s mostly symbolic power in a reactionary world. Indeed, while the story of women in 2017 is one of audacity, the overall outlook remains grim. While Clinton looked tough and graceful compared to her rival – and there were more pink pussy hats than red MAGA ones in D.C. that weekend – the red hats still had the power of the institutions behind them. The pussy hats didn’t, and don’t. From that moment to this one, as #MeToo accusations result in a flurry of high-profile firings and resignations, the question that has hung over 2017 feels like it’s coming to a head: Will women’s courage matter?

That courage has certainly been inspiring to behold. As the weeks after the inauguration turned to months, and the administration’s breaches of decorum and dignity mounted, individual women continued to provide a lesson in what it means to have a backbone.

For one young woman bearing the brunt of Trump’s policy agenda, heroism came in the form of a fight for bodily autonomy. The saga of Jane Doe, the anonymous teen whose legal battle became The Handmaid’s Tale come to life, played out over months. She experienced brutality and hardship on her way to the U.S., was detained in a Texas facility and then had to fight tooth and nail against the administration to get a much-desired abortion. But she never gave up, nor did her advocates. 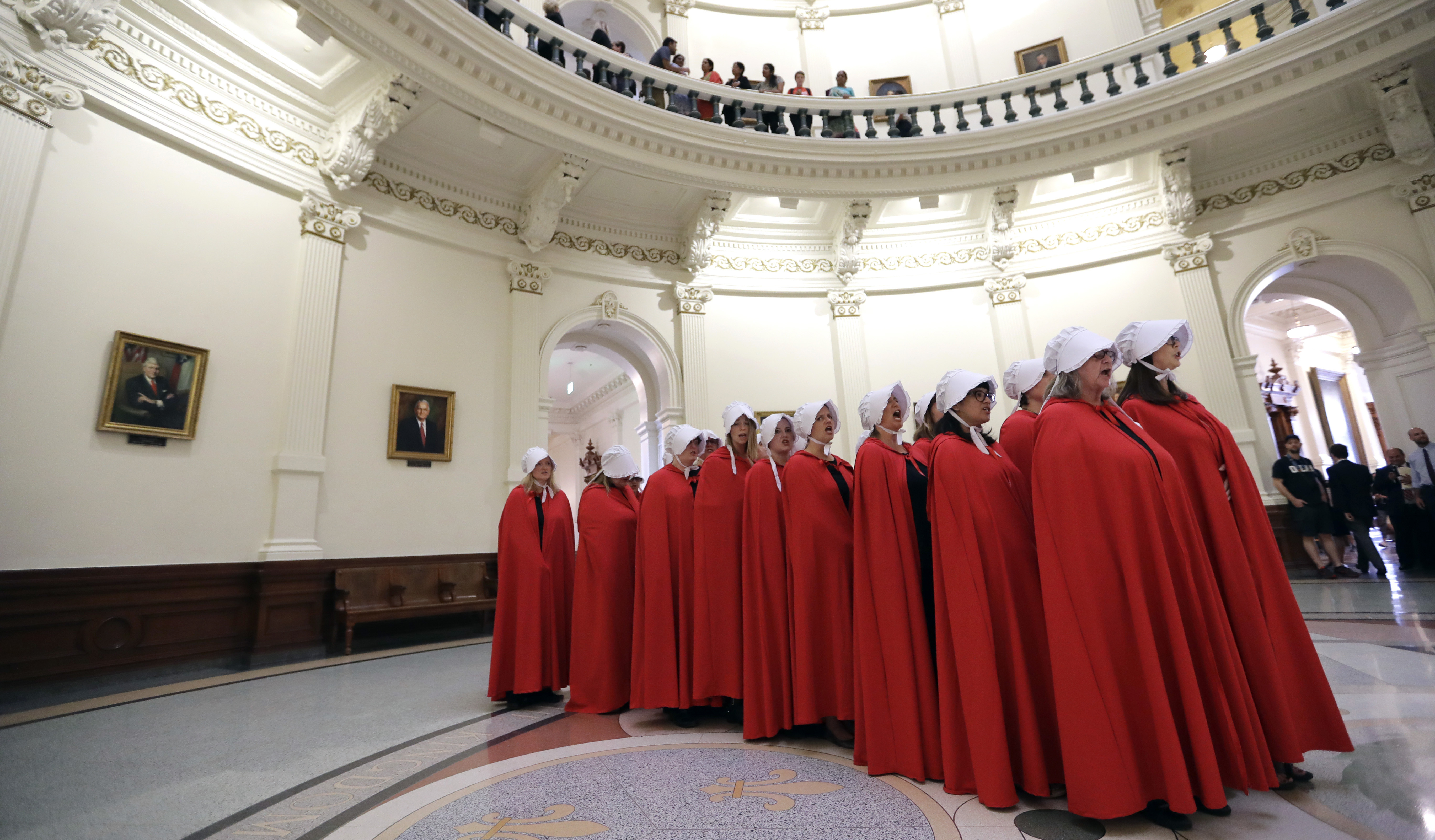 Another traumatized woman schooled us all in grace under pressure. Myeshia Johnson, the widow of recently slain Marine La David Johnson, found herself in October talking to the president while in the throes of crippling grief. Nonetheless, she refused to back down from telling the truth about Trump’s dismissive, disrespectful treatment of her and her husband – nor did Rep. Frederica Wilson, who stood up for her despite the scrutiny and attacks that came their way. “I was very angry at the tone of his voice and how he said it,” Johnson told Good Morning America.

Johnson wasn’t the only woman whose grief brought out unimaginable courage. This summer, Heather Heyer was standing up against hate in Charlottesville when she was killed by a white supremacist in a car. Her mother, Susan Bro, found herself in the national spotlight in a moment of bereavement, much like Johnson did – and refused to accept the president’s condolences, noting correctly that his equivocation between “both sides” at the protests essentially condoned the hate marchers. “You can’t wash this one away by shaking my hand and saying, ‘I’m sorry.’ I’m not forgiving for that,” Bro told the press, adding this message for Trump: “Think before you speak.”

Again and again this year, women showed their spines by speaking out against Trump. They did so despite knowing that he often lashes out with swift and brutal ferocity at his female critics, especially women of color, unleashing a torrent of threats. Carmen Yulín Cruz, the mayor of San Juan, Puerto Rico, criticized the federal response to Hurricane Maria, declaring Trump all but complicit in murder by neglect. Oakland Mayor Libby Schaaf responded to Trump’s attack on kneeling football players by saying, “I believe this man is the bully in chief. … He picks on people who have traditionally been abused and disadvantaged.” Chelsea Manning emerged from prison and began to signal her support for protesters and activists on Twitter, indefatigably hopeful despite her brutal time in solitary confinement and the vitriol she receives daily.

Journalists like Jemele Hill hung tough despite being singled out for criticism by Trump and then threatened by his mindless army of trolls. Hill, facing the double specter of sexism and racism, even continued to speak with integrity after being suspended from her job for tweeting an implicit endorsement of kneeling NFL players. And politicians like Maxine Waters and Elizabeth Warren, refusing to be quiet, turned the phrases “reclaiming my time” and “Nevertheless, she persisted” into feminist rallying cries.

There were also the ordinary folk heroes: Juli Briskman, the woman who flipped off Trump’s motorcade and got fired for it, and Karen Fonseca, whose “Fuck Trump” window decal earned her Facebook threats from her local sheriff, Troy Nehls. (Fonseca has since amended the message: “Fuck Trump, fuck Troy Nehls and fuck you for voting for him,” her truck now reads.) The public support they received showed how hungry we were for voices willing to take risks to be heard. 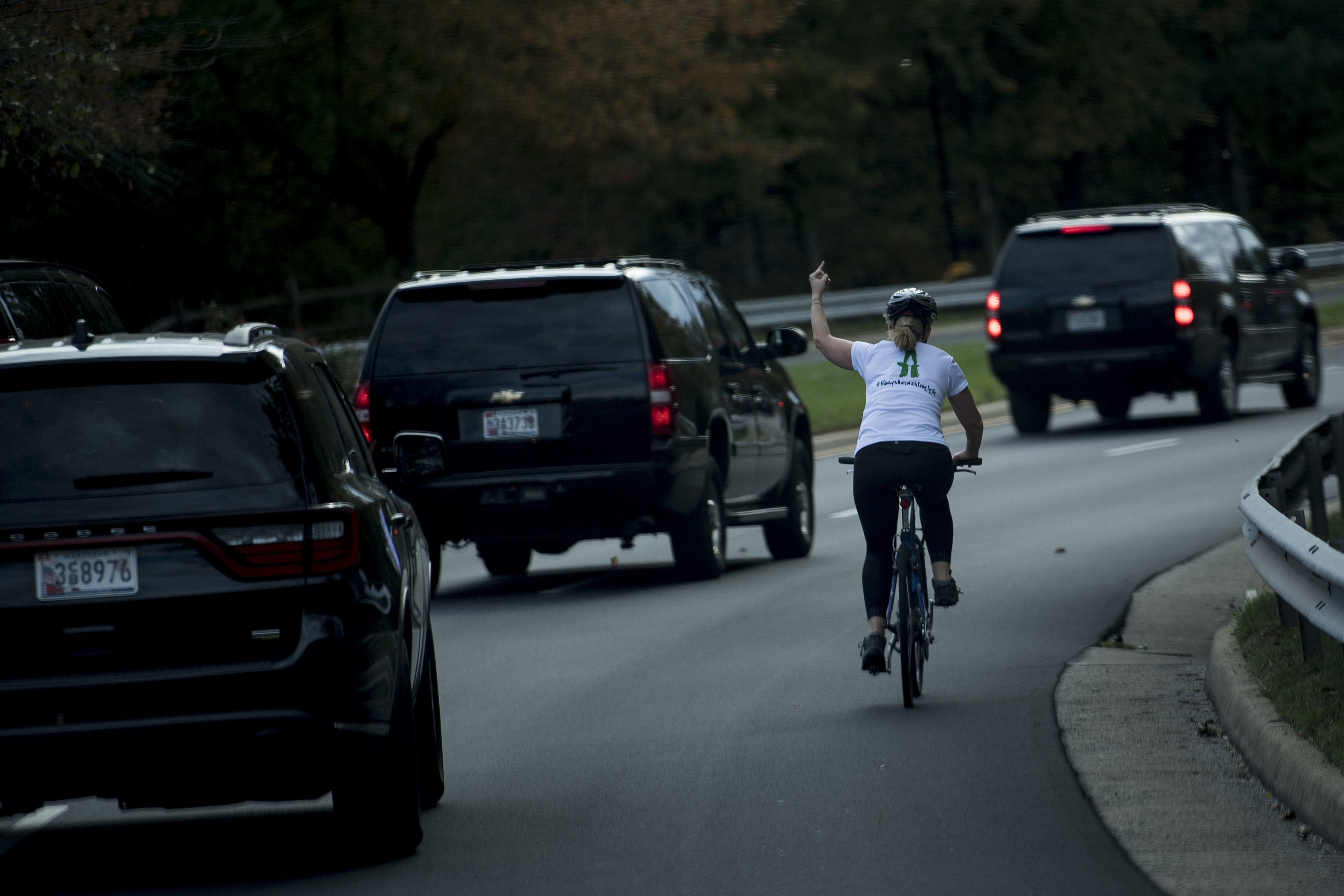 All this courageous speaking truth to power has culminated in the #MeToo movement, the post-Harvey Weinstein flood of sexual harassment and assault allegations that are so plentiful any one of them would own a headline cycle for weeks in a normal year. (Remember Bill O’Reilly getting fired all the way back in April? Or a group of Olympian gymnasts saying they were abused by their team doctor?) The bravery of one group of accusers inspires others to speak out, and ever onwards, as the heads continue to roll.

But even as this movement – brought about by a combination of Trump-inspired rage and decades of feminist organizing – continues to sweep powerful men out of their jobs, we wait to see real reforms. Hostile environments will only change when workplaces institute new transparency rules, reporting processes, equal pay and other mechanisms to prevent both harassment itself and the workplace sexism and bullying that enable it. For now, the courage of women and the outing of harassers feels like an end in and of itself. But it’s key to remember that in industries that are still male-dominated and profit-motivated, any lasting change will be hard-fought.

So it’s difficult not to temper the exultation in women’s bravery. This year’s much-needed moments of chutzpah provided by gutsy women were heartening in the context of a larger assault on all of us. Women’s rights continued to contract on the local level, as they have since the Tea Party days. Abortion rights remain under fire in the absurd new tax bill, which attempts to define life as beginning at conception, and that bill’s rollbacks to Obamacare will affect poor women and families disproportionately.

Our commander-in-chief is an avowed groper, the judiciary is being packed with right-wingers. We may soon have an accused child molester elected to the Senate, and if he wins it will largely be because of voters’ virulent anti-choice beliefs. And far too many privileged white women, angry about slights against them and them alone, still don’t understand why it’s important to show solidarity – alas, some notable voices blaming victims for their own harassment have been female.

And yet you can’t fully discount the power of an inspiring heroine. I recently attended a screening of One of Us, a documentary about three people who leave ultra-Orthodox Judaism behind. Like many viewers, I became haunted by the story of Etty, the sole female subject of the film, who dramatically uncovers her hair and face partway through. Etty had left an abusive husband in the community and been punished with harassment, stalking and the worst fate imaginable: the loss of custody of her kids. The film’s sequence depicting Etty’s supervised visits left viewers in tears.

It’s not surprising Etty’s story resonated – but it’s surprising how it resonated. One of Us focuses on the “price” paid by those who leave ultra-Orthodoxy, and it certainly brings to mind extreme religious groups and cults. But in the context of this crazy year, Etty’s story seems less confined to the sub-genre of religious extremism and more a reflection of what’s threatening all of us.

In Trump’s America, we’re living under a different kind of patriarchal extremism, but an extremism no less. So the story of a woman who stood up against abuse and male domination in her community – and still paid that fabled price, as its institutions closed ranks against her – is one that provides a road map, and a warning, for everyone who wants to keep fighting. Indeed, so many of the women who were our heroines this year experience loss: mourning family members, being attacked and threatened, or losing their livelihoods.

But it seems like whatever the price may be, women simply can’t and won’t shut up. American women are dauntlessly echoing the words of young Jane Doe, who wanted to be an American so much she risked her life to cross the border, as she demanded access to her abortion: “This is my life, my decision. I want a better future. I want justice.”