Will Trump's Abrupt Dance With the Democrats Last? - Rolling Stone
×
×

Something odd happened in Washington this week, as President Trump and Democratic leaders basked in praise from cable news talking heads, while Republican leaders – who theoretically wield the most power on Capitol Hill – were forced to embrace a massive economic package that many in the party publicly decried mere hours before Trump endorsed the deal.

This is bizarro-Washington, one where Trump’s opponents have become his giddy teammates and where his team’s cheerleaders, Paul Ryan and Mitch McConnell, have watched their date dance with someone from the opposing team.

Lawmakers on both sides of the aisle warn the perceived rift between the president and GOP congressional leaders could be momentary. Still, the president has a lot of healing to do with his party after he publicly rebuked senior Republicans who voted against him on health care, appeared at a rally with a vulnerable Democrat, and repeatedly ripped Senate Majority Leader Mitch McConnell in a string of summer tweets, and for his handling of the deadly white supremacist rally in Charlottesville.

The deal Trump cut Wednesday to forego an 18-month extension of the nation’s debt ceiling – think extending your credit card limit – that Republican leaders favored over a three-month extension embraced by congressional Democrats sent shockwaves through GOP circles; the Democrats seemed to get everything they desired merely by asking for it.

“I was very surprised by the deal that was struck,” moderate Republican Sen. Susan Collins tells Rolling Stone. “Usually when you have disagreement with Republicans on one side and the Democrats on the other, you split the difference.”

Trump’s move came as a bipartisan group of senators, including three Republicans, prepared to introduce a resolution to get the president on record condemning white nationalists and other such hate groups.

“We need to be united as the House, the Senate and the president in condemnation and making sure that everybody understands that there is no room for that kind of hatred and bigotry in this country,” Republican Sen. Cory Gardner, an original sponsor of the resolution, tells Rolling Stone. “We need to make sure that we are clear in our objection.”

Besides going after McConnell in August, the president also took shots at Arizona’s two senators at a rally there. Those senators are brushing aside the slight from Trump on their home turf.

“I comment on what the president does, not what he says,” a visibly annoyed Sen. John McCain tells Rolling Stone. “I’ve got to do work in the Senate.”

At a North Dakota rally the president held this week on his nebulous tax reform package, he invited Democratic Sen. Heidi Heitkamp aboard Air Force One and on stage, where he praised her. Republican leaders in Washington hope to unseat her in next year’s midterm election. That left Washington’s GOP establishment wondering which side Trump will be on next year, though they’re banking Trump would rather have a Republican majority than a Congress run by Sen. Chuck Schumer and a block of centrist Democrats. 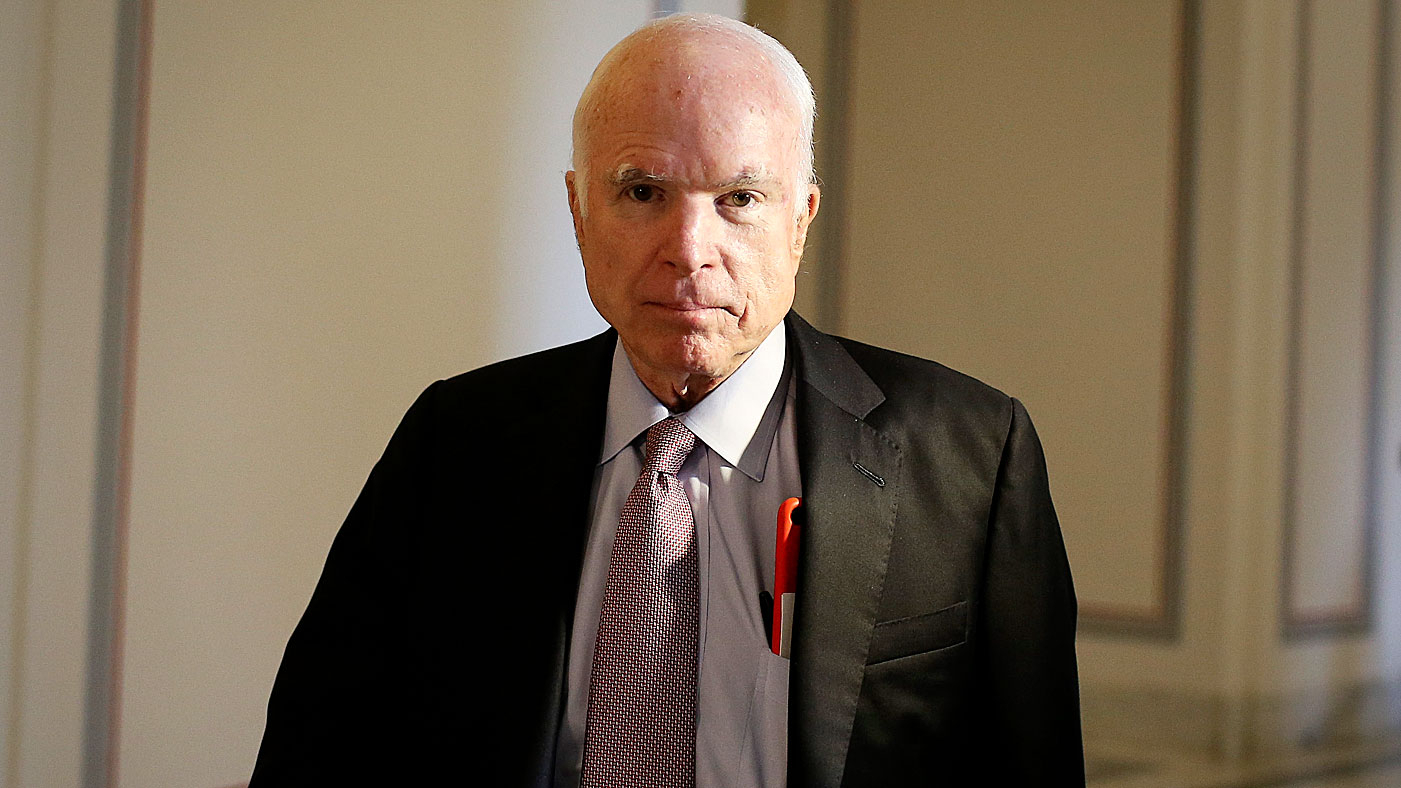 Divisions in the GOP are also evident in the party’s signature campaign promises.

“I think the health care vote shows we are very fractured – we lost three chairmen to that vote,” GOP Sen. David Perdue tells Rolling Stone of the three Republican senators who tanked the party’s signature Obamacare repeal effort. “So this is a question of, is the Republican Party going to govern? Or are we going to sit here and vote our own personal interest? Right now personal interest is outweighing the national interest, and sooner or later we have to come to grips with that.”

GOP leaders are trying to woo the president back to the fold with gentle reminders that he won their party’s presidential primary, and that to deliver on those foundational promises he needs to move to the right – not to the left, as he did repeatedly this week.

“I think in the end the president is going to need to work with the Republican leadership in the Congress to get the major items on his agenda done. There just isn’t a lot of agreement with Democrats on some of these major issues,” Sen. John Thune, the number three Senate Republican, tells Rolling Stone.

Centrist Democrats see things differently. They say after months of prolonged gridlock and numerous failed attempts to ram through a Republican-only agenda, the novice president may finally be reading the playbook on how to actually govern in Washington: Going it alone doesn’t work.

“I think the president has tried everything going down the other path – hasn’t worked that well,” Democrat Sen. Joe Manchin tells Rolling Stone. “So why not try to find the path? I think hopefully it will give Democrats a reason to try to work a little bit harder and try to find common ground on the pathway.”

But Manchin is a vulnerable centrist Democrat from West Virginia, while his party seems to be taking a sharp left turn. And progressives are dubious.

“I think the president operates on the fly. I think he made a decision [Wednesday] to agree with Democrats, and he’ll probably be calling Chuck Schumer names by tomorrow,” Connecticut Democratic Sen. Chris Murphy told reporters. “I think everybody wants to find some long-term strategy in the daily prevarications of the White House, but I’d keep searching.”

Still, more senior Democrats say Trump deserves some credit for the new tone he showed Washington, the nation and world this week by reaching a bipartisan deal that rankled many in his own party.

“It was clearly exercising the type of decision-making that can get things done, because we’re now going to take care of keeping the government open, the debt ceiling and taking care of the initial funds for the hurricane. So it was a good result,” says Democratic Sen. Ben Cardin, though he remains skeptical of the GOP rift with Trump lasting. “With President Trump, you never know. You don’t see much consistency. What he does is the unexpected … I don’t give a great deal of hope that this is a new chapter.”

Indeed, rank-and-file lawmakers in both parties openly wonder whether Nancy Pelosi and Chuck Schumer permanently have the president’s ear or whether his next deriding tweets will be turned against this week’s allies.

“It may be something of a feeling of euphoria today, but there is always a hangover that comes the next day,” GOP Rep. Bill Flores told reporters. “I’m not being critical of the president: He did what he thought he had to do. Will see how it works. Not only this week, but longer-term.”