Will Electors Vote Their Conscience and Stop Trump? - Rolling Stone
×

You may not realize it now, but December 19th, 2016 – this coming Monday – will be a historic day for America. Either it will mark the formal vote putting the most inexperienced and dangerous demagogue ever seen in U.S. politics into the White House, or it will be the day an antiquated institution finally serves its centuries-old purpose and puts its foot down to stop an impending national disaster.

Five weeks ago, Americans cast their votes for president of the United States. Though millions more people voted for Hillary Clinton, Donald Trump won nonetheless, thanks to America’s archaic electoral system, created centuries ago by a bunch of property-owning, slavery-protecting white men who could have never imagined our current world.

But the vote that really matters, practically speaking, doesn’t happen until Monday, when the 538 members of the Electoral College gather in their respective state capitals. In a normal election, there would be no intrigue whatsoever surrounding this part of the process. The electors – all partisan political operatives chosen because of their allegiance to their candidate and party – would vote as expected, and there would be no real question that the same person who won the majority of electors in November would win the electors’ vote in December.

But this is no normal election. It’s one in which the president-elect got nearly 3 million fewer votes than Hillary Clinton. (By comparison, Al Gore won the popular vote in 2000 by only 500,000.) He has vast conflicts of interest that, since November, he’s hemmed and hawed over rather than clearly addressing. He’s suggested he’s too smart to need security briefings, yet has already violated basic bipartisan norms of international diplomacy. In recent weeks, white-supremacist and former KKK leaders have celebrated their return to power, and individuals with no relevant experience are being picked for cabinet positions – including some who are hostile to the existence of the very agencies they’ve been picked to lead. What’s more, Vladimir Putin himself may have been involved in a Russian plot to interfere with the election in favor of the Republicans. And this is all on top of what we knew before November 8th: that Trump has no political or military experience, has little respect for or understanding of the Constitution, stirs up racists and anti-Semites and bragged about serial sexual assault.

How the Electoral College Rigged the Election for Donald Trump 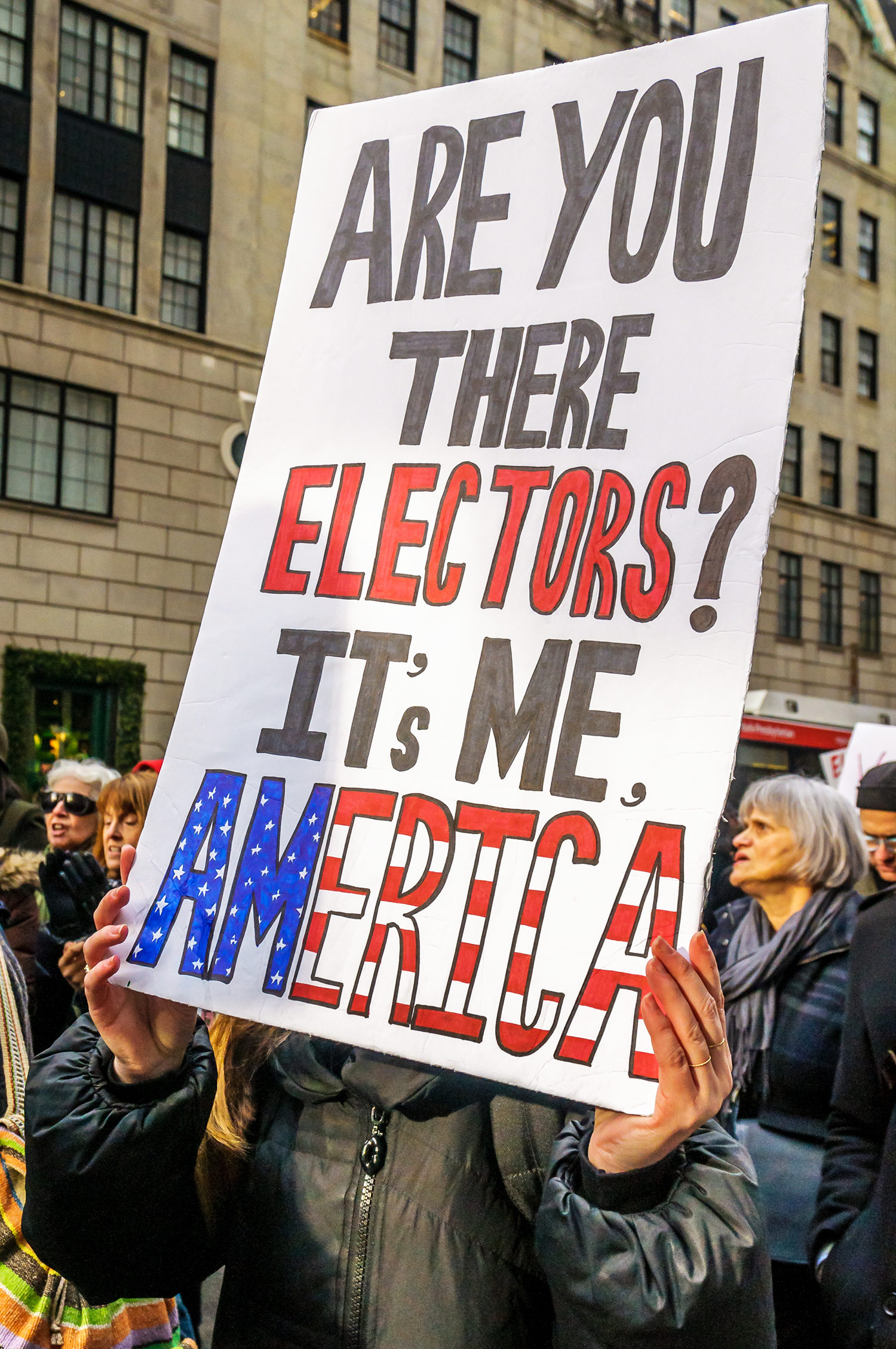 Getting 37 GOP electors on board with this effort is a massive long shot. But according to Harvard professor Larry Lessig, there may be as many as 20 who are at least considering it. And there are two so far who have publicly declared they will not vote for Trump. Christopher Suprun of Texas, a 9/11 first responder, has said he will vote for John Kasich because Trump “chooses to stoke fear and create outrage.” Another Texas elector, Art Sisneros, has stepped down from his position rather than vote for Trump. His effort does not have the same effect as Suprun’s, since another Trump elector will be appointed in his place, but his message is clear: Trump is not fit for the presidency.

These electors are acting as the U.S. Constitution intended them to. Even though, historically, only a handful of electors have ever deviated, the Electoral College was created in part to deal with this exact situation. In particular, Suprun is following the words of Alexander Hamilton, one of the constitutional founders who helped create this system. Hamilton defended the Electoral College by claiming it was a failsafe against a “man, who is not in an eminent degree endowed with the requisite qualifications.” The electors have this duty because they are “most capable of analyzing” the choice “under circumstances favorable to deliberation.” Hamilton wrote that electors, compared to the general electorate, “will be most likely to possess the information and discernment requisite to such complicated investigations.” In other words, electors who do not analyze and deliberate about whether Trump is endowed with the proper qualifications for the presidency are failing in their constitutional duties.

There are many efforts underway to convince other electors to join Suprun. Unfortunately, the Democratic Party has gone silent in this regard – something Republicans never would have done if the situation were reversed. Instead, the efforts are being led by ordinary citizens. They include letter-writing campaigns to electors and lawsuits to void state laws that prohibit Electoral College members from voting for someone other than their state candidate. (More than half of states have such laws in place.) In one case, a couple of rogue Democratic electors are trying to sway their Republican counterparts to instead vote for a moderate Republican.

Republicans, meanwhile, have been doing what they can to protect their electoral lead. One elector has claimed Trump’s people have been threatening GOP electors with political reprisal and career decimation. And the RNC has been contacting electors to make sure their votes are locked in.

Here’s more news liberals will not be happy to hear: Even if, somehow, 37 or more electors do defect, there’s basically no chance of Hillary Clinton being named the next president. It’s nearly impossible to imagine all those GOP electors casting ballots for her; they’re much more likely to vote for another Republican, as Suprun has said he will.

Even if they do – and neither Trump nor Clinton receives a majority of the electoral votes – then the House of Representatives decides who becomes president. If that happens, each state delegation in the House gets one vote, meaning the Republicans, who control the majority of state delegations, get to decide who becomes president. At that point, House Republicans could do what the electors didn’t, and choose Trump. Or they could pick whoever the electors give the third-most votes to – someone like Kasich, perhaps.

When it comes down to it, the most likely outcome Monday is that the Electoral College vote goes exactly as planned: Trump receives all, or nearly all, of his 306 electoral votes and becomes the next president of the United States. But if enough electors take their constitutional obligation seriously and decide to protect the future of this country from Trump – and there’s a strong argument for why they should do so – the 2016 election could get even more unusual than it’s already been.

With his cabinet nearly complete, we have a sense of the qualities Donald Trump believes makes someone “the best.” Watch here.