In the 230-year period between the ratification of the U.S. Constitution and Barack Obama’s election, opposition parties blocked a grand total of 68 presidential nominees. In the three years and 10 months between Obama’s inauguration and then-Senate Majority Leader Harry Reid’s move to eliminate the filibuster for lower court nominees, Republicans had blocked 79 of them – that’s 54 percent of the historic total in just under four years.

Last week, the current Senate majority leader, Mitch McConnell, moved to eliminate the filibuster for Supreme Court nominees after the Democrats filibustered Donald Trump’s pick, Neil Gorsuch, who had come off as aloof and unresponsive during his confirmation hearings and offered no reason for refusing to meet with two (women) Democratic senators. But as Media Matters noted, the political press largely portrayed the Republicans’ choice to do away with the filibuster as the fault of Democrats – they said the Democrats forced McConnell’s hand, and in some cases blamed both sides for generic “dysfunction.” This followed weeks of stories about how the party’s “liberal base” was forcing Democrats to block Gorsuch, and wondering if Dems would have the courage to stand up to their constituents.

Obama’s nominee for the seat, Merrick Garland, is the only candidate in the history of the United States to be denied a hearing by the opposition. As one might expect, Democrats and progressives are outraged that Republicans effectively stole a seat that might have shifted the Court’s ideological balance to the left for the first time since 1971. But the both-sides-do-it reporting we’ve seen makes their fury seem illogical, a simple case of sour grapes.

It’s pure gaslighting – making someone think they’re crazy when their sanity isn’t the issue. For the most part, it’s unintentional, a natural consequence of the Beltway press’s tendency to see everything in strictly partisan terms. But even so, it’s maddeningly common in reporting on the resistance to Trump, both in Congress and among the grassroots.

NPR’s Lourdes Garcia recently asked former Obama adviser David Axelrod if Democrats are “being hypocritical” for supporting “obstructionist” tactics, much like Republicans did under Obama. New York Times columnist Andrew Rosenthal wrote that both Trump and Obama shared a “debilitating belief in their own public relations,” and felt no need to reach across the aisle. And at Politico, Geoffrey Kabaservice characterized the anti-Trump resistance as a left-wing version of the Tea Party, and wondered whether Democrats “are becoming extremists.”

These comparisons are exercises in false equivalence. Yes, Trump and Obama have both faced concerted opposition from their opponents. Both have inspired not only loathing, but also a deep sense of anxiety among their opposing parties’ respective bases. The legitimacy of both administrations has been regularly called into questioned. But what inspired that fear? On what basis did people dismiss the two presidents’ respective legitimacy? That’s where the fundamental differences emerge, and virtually all comparisons of their presidencies fall apart.

Polls conducted in 2010 found that only four in 10 voters who identified with the Tea Party movement believed that Barack Obama was born in the United States. They embraced a notable goofy – and racist – conspiracy theory that originated with Andy Martin (not Hillary Clinton), a fringe political figure in Illinois, and was then popularized by far-right websites like WorldNetDaily and, ultimately, Donald Trump himself.

Democrats question Trump’s legitimacy in part because he won the White House while losing the popular vote, but also because our intelligence agencies concluded that Russia intervened in the election on Trump’s behalf – a subject of several ongoing investigations – and because there’s pretty good evidence that FBI Director James Comey’s last-minute letter to Congress hinting that a criminal probe against Clinton was still underway shifted the race. That move was widely reported to have violated agency protocols and resulted in an investigation of Comey’s handling of the issue by the Justice Department’s inspector general. 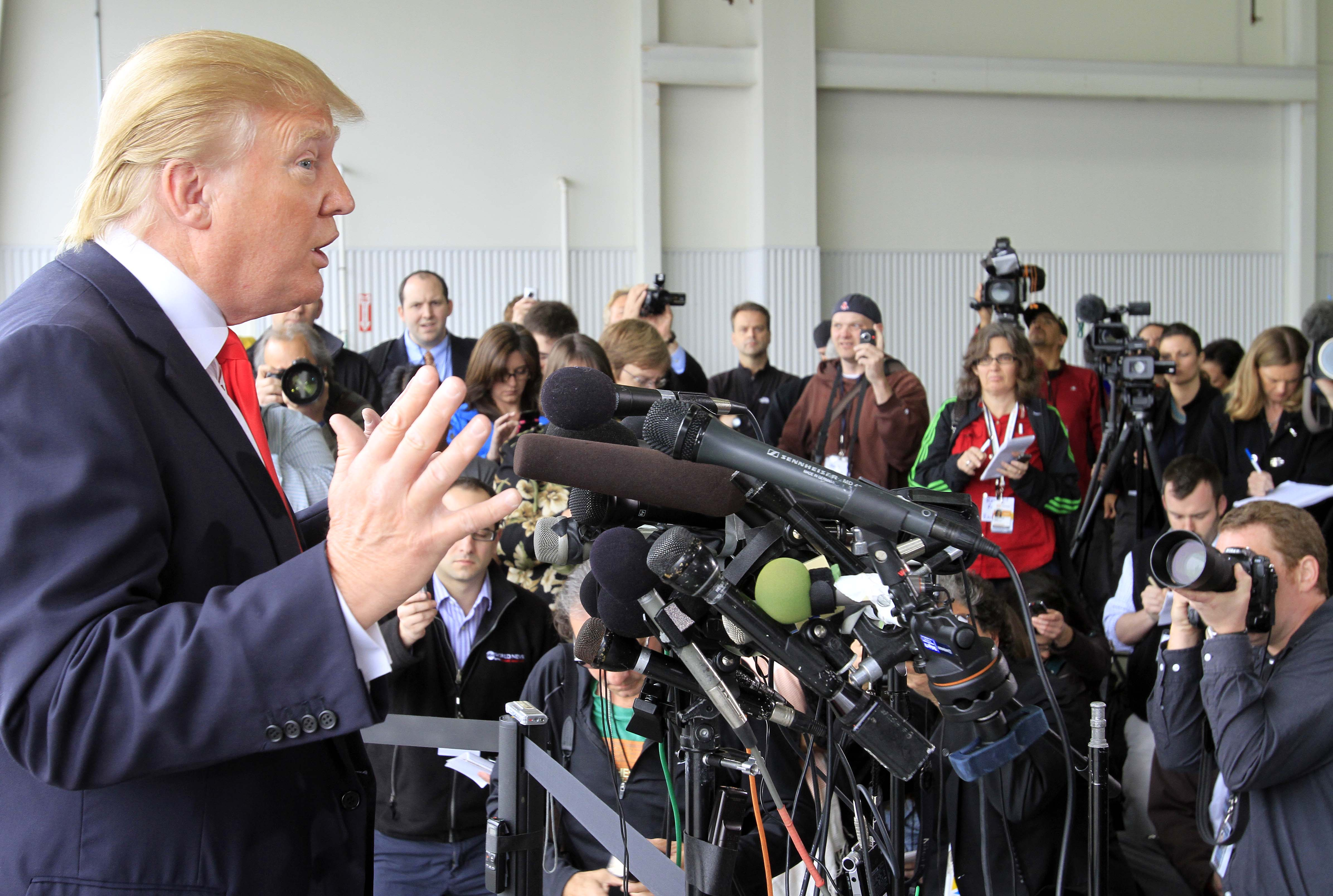 One doesn’t need to accept the intelligence community’s findings to acknowledge that believing its conclusions isn’t in any way comparable to buying into thoroughly debunked nonsense peddled by wingnut bloggers and a reality-TV star (even if the latter went on to become president).

Love him or hate him, there’s no doubt Obama was a mainstream Democrat who spent eight years in the Illinois state legislature before being elected to the United States Senate. Once elected, he surrounded himself with advisers who were experienced and qualified for their jobs. Some of them soon became fodder for a baseless conspiracy theory, popular on the right, which held that Obama had appointed dozens of czars to replace elected officials.

Meanwhile, Trump is the first president in history to lack any experience in government, and he frequently makes that clear. His closest advisers include family members, who similarly lack relevant experience and are also running the business he supposedly has nothing to do with; several people who have registered as foreign agents; Sebastion Gorka, whose association with a Hungarian group with Nazi ties is even more alarming than his dubious credentials; and former Breitbart CEO Steve Bannon.

It’s also true that Democrats and the left express real fear over Trump’s policies, just as Republicans and the right were terrified of Obama’s agenda. But any similarity ends right there.

It’s an objective fact that Trump campaigned on barring Muslims from entering the U.S. – a promise he tried to implement once elected, creating a “deportation force” to remove 11 million undocumented immigrants and rejecting the longstanding consensus toward multilateralism for an “America First” foreign policy. There’s no question Trump vowed repeatedly to “repeal and replace” Obamacare, or that the CBO estimated that the GOP plan to do so would have resulted in 24 million Americans losing their coverage. He said climate change was a hoax cooked up by the Chinese, and vowed to pull out of the Paris agreement and undo Obama’s efforts to tackle greenhouse gas emissions. Even the most neutral reporter has to recognize that these are all grounds for alarm.

That’s not the case on the other side. The “Tea” in “Tea Party” stood for “Taxed Enough Already,” and almost two-thirds of Tea Partiers said that Obama had raised taxes on “most Americans” at a time when he had in fact cut them, repeatedly, for Americans at all income levels. Their top complaint was that government had grown too large, at a time when federal revenues were at their lowest point, as a share of the economy, than at any time since 1950. When asked how much the government collected in tax revenues, their answers averaged 40 percent, double the highest level of taxation since 1970.

More than nine out of 10 Tea Partiers told pollsters that they feared Obama’s policies were “moving the country toward socialism.” Many believed that Obama had kicked off his presidency by going on a “global apology tour,” a claim Politifact called “a persistent and false Republican talking point that we have debunked a number of times.” Many received subsidized health insurance, but hated Obamacare for its “death panels” (Politifact’s 2009 Lie of the Year) and a “government takeover of health care” (2010’s Lie of the Year). Polls found a sharp spike in the number of gun owners who thought the government was going to do away with the right to bear arms with Obama in the White House.

So far, Trump hasn’t made any effort to work across the aisle or attract moderate Democratic support for his agenda. Congressional Republicans accused Obama of the same thing. They said he’d “rammed” the Affordable Care Act “down their throats.” They claimed, repeatedly, that nobody knew what was in the bill until they voted for it. “We’ve offered to work with the president all year,” said then-House Minority Leader John Boehner in 2010. “We’ve been shut out, shut out and shut out.” But 160 Republican amendments were included in the Senate bill that would eventually become law. Multiple committees held months of hearings, and then the upper chamber debated the measure for 25 hours before passage.

I could go on: Jade Helm, the claim that Obama was sworn in on the Koran, the conspiracy theory that Bill Ayres ghost-wrote his memoir (a favorite of Donald Trump), etc. The point is that the circumstances around these two presidencies couldn’t possibly be more different, and while both men faced fierce opposition, the resistance to Trump is to a much greater extent grounded in reality, or at least information from credible sources, rather than crackpot internet rumors.

Yet the political press elides these differences in story after story, instinctively framing the opposition to Trump as just more partisan wrangling, rather than a principled response to an authoritarian demagogue elected by 27 percent of the eligible voting population. It’s bad journalism, and it needs to be called out.

Correction: A previous version of this article incorrectly stated the number of years Barack Obama spent in the Illinois legislature.