Amid mounting political pressure to legalize marijuana in New York, Bill de Blasio, the mayor of America’s largest city, remains locked in a prohibitionist mindset. At a press conference this week touting a new campaign to stamp out vermin (not a euphemism), the mayor fielded a question about pot. Seated before a logo reading “Watch Out Rats!” de Blasio insisted that legal marijuana poses unacceptable risks: “It would become another corporate reality,” the mayor said. “And then, as we’ve seen with tobacco, there’d be a consistent effort to try and hook young people, and potentially spread something much more widely than it is even now. That worries me … That’s why I’m just not there” on legalization, he said, adding defensively: “I think you can be a good progressive, and really have those concerns.”

By focusing on the phantom menace of Big Pot, de Blasio is dismissing the reality – and the very real harm – of Big Cop in New York City. Last year, nearly 18,000 New Yorkers were arrested for marijuana possession. The disparities in arrest records reveal stark, institutional racism in the city’s policing. Marijuana is popular among all races, but nearly half of people arrested for pot are black; 38 percent are hispanic. Whites, who account for 40-plus percent of the city’s population, make up less than 10 percent of arrests. In his campaign for mayor, de Blasio, whose own family is mixed-race, blasted such disparities as “unjust and wrong,” yet they have persisted, all but unchanged, on his watch, even as the overall arrest rate for pot as dropped.

Are We Really Getting Closer to Overhauling Marijuana Laws?

Each New Yorker busted for marijuana becomes entangled within the justice system. The harm begins with the dehumanizing and sometimes deadly rituals of arrest. Repeat offenders, and those with previous, unrelated criminal records, risk jail-time. A joint in the pocket can land you in a cell at Rikers. Gubernatorial candidate (and, yes, former Sex and the City star) Cynthia Nixon has cited the racism of pot enforcement in her call to legalize statewide: “We have to stop putting people of color in jail,” she said, “for something that white people do with immunity.”

Mayor de Blasio’s defense of prohibition reflects a refusal to engage with the evidence. The overwhelming effect of pot legalization is not to hook new, young users, but to protect tens of thousands from needless arrest and incarceration. As de Blasio himself once recognized: “Low-level marijuana possession arrests have disastrous consequences for individuals and their families.”

A recent report from the Drug Policy Alliance presents hard data. When states legalize marijuana, “average” people stop getting arrested for it. This effect is both obvious and profound. Low-level marijuana arrests and/or court dates have fallen 98 percent in Washington state; 96 percent in Oregon; 88 percent in Colorado. Possession arrests in Washington, D.C., have nearly ended. In Oregon alone this decline represents nearly 13,000 people a year who are no longer subject to the vagaries of the criminal justice system. 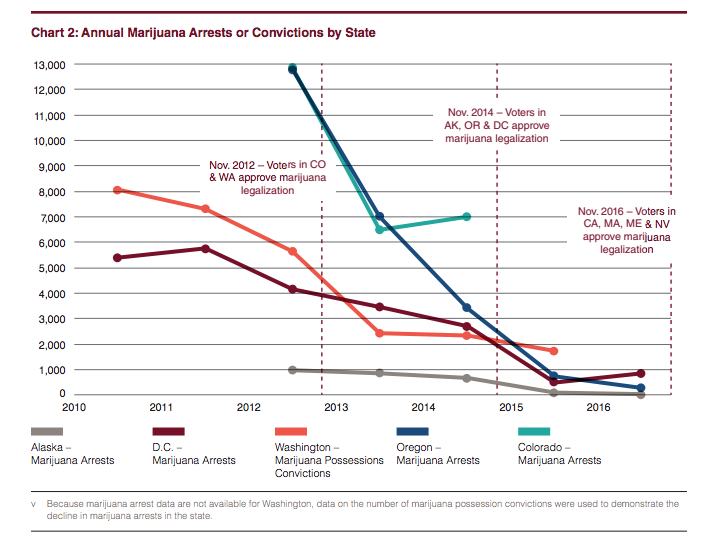 Against this enormous benefit to the lives of thousands of Americans, we’re left to balance the supposed harm to young people in legalized states. In reality, the impact of legalization on underage pot smokers is so small that it may be statistical noise. Young people in pot-legal states are not getting hooked on the demon weed.

Colorado has the longest experience with legalization and its children have not degenerated into potheads. According to DPA’s review of state data: “Recent use among 9th and 10th graders in Colorado has been virtually unchanged since 2011. While it appears that recent use of marijuana among 11th and 12th graders in Colorado might have increased since 2012… these changes are not statistically significant.” Today, Colorado youth use pot at a similar rate to all American kids, most of whom live under prohibition.

When even Gov. Andrew Cuomo is realizing “the facts have changed” and Sen. Chuck Schumer is pledging a bill in Congress to decriminalize marijuana use nationwide, the time has come to stop resisting the tides – and use the powers of your office to shape how they flow.