The Washington Post seemed happy about Amazon’s decision to divide its new headquarters between New York and Crystal City, Virginia, outside of D.C., noting the amazing benefits both communities will receive by the arrival of the web-retail behemoth. The company expects to create 25,000 jobs in Northern Virginia by 2030, and generate $3.2 billion in tax revenue, in addition to investing $2.5 billion.

Who better to trumpet the virtues of this job-creating, capital-investing deal than the richest person in modern history, Amazon CEO Jeff Bezos? He sounded pleased as heck to be part of all the wonderfulness.

“We are excited to build new headquarters in New York City and Northern Virginia,” Bezos said in a statement, adding: “The team did a great job selecting these sites, and we look forward to becoming an even bigger part of these communities.”

Rather quickly after the “HQ2” announcement was made, MarketWatch ran a piece pointing out that moving to Northern Virginia might have other benefits for Amazon: HQ2 in the D.C. area could help Amazon snag a $10 billion Pentagon contract.

Yes, the company has increased the odds that it will be awarded one of the all-time lucrative defense deals, the $10 billion Joint Enterprise Defense Infrastructure (JEDI) contract, providing cloud services and a platform for Department of Defense operations, instantly becoming one of the biggest federal contractors.

The deal has been a source of controversy for a while. In July, a pair of Republican members of Congress, Steve Womack of Arkansas and Tom Cole of Oklahoma, sent a letter to Glenn Fine, acting Inspector General of the Defense Department. In it, they claimed the contract was essentially pre-delivered to Amazon.

Among other things, the JEDI award can only go to a provider that meets Defense Information Systems Agency Impact Level 6, a requirement that has to do with security/secrecy clearances. “The highest level of cloud security” is how one congressional source explained Level 6 to me.

Although the lawmakers did not single out Amazon, they did say only one private provider meets that requirement, and numerous reports say that provider is Amazon Web Services.

Vanity Fair ran a piece this past summer noting other deal requirements — like a prerequisite of $2 billion in cloud revenue — ruled out all but a few competitors.

“The deal appeared to be rigged in favor of a single provider,” the magazine wrote, adding that Amazon Web Services had ties to Trump Defense Secretary James Mattis.

Amazon already had another recent win on the defense-contracting front with the passage of the so-called “Amazon Amendment,” which makes Amazon the go-to portal for the government’s online purchases. This was included in last year’s Defense Authorization Bill. That amendment will cover $53 billion in annual government purchases, enriching the firm even more.

Having an auction on the scale of the JEDI deal with only one qualified bidder sounds more like the contracting style of Belarus or Indonesia than the United States. One wonders if that played a role in Amazon picking Crystal City and its $573 million in tax incentives over, say, Newark, which prostrated itself by offering $2 billion.

Did the initial Post story mention that Amazon might be getting back a $10 billion “prize” itself in this deal? No. Wasit a surprise that the first person the Post quoted was its owner? Probably not. Obviously no one from Amazon is running into their newsroom with a red pencil in hand, but everyone knows who signs their checks, and the gravitational pull of ownership can have a way of shading coverage over time — which is a especially problematic in this case.

If the main news source is owned by Amazon’s CEO, and Amazon is simultaneously a major private contractor to the most secretive and powerful agencies in federal government, that doesn’t exactly feel like the Jeffersonian ideal for America’s capital city.

“News consumers need separation of press and state,” says Jeff Cohen, founder of the press watchdog FAIR (Fairness and Accuracy in Reporting). “It’s dangerous when the Post does not regularly inform readers that its owner’s company is intertwined financially and logistically with the CIA.”
Reached for comment, a spokesman for the Post tells Rolling Stone, “As Jeff [Bezos], Marty [Baron], Fred [Hiatt] and others have stated over the years, The Post’s newsroom is independent. Decisions are made by Marty and his team, no one else.”
The paper ran another piece Tuesday night stressing that Amazon didn’t have the JEDI bid sealed up and that the company was merely the “first” to meet key bid guidelines. “The company may beat out Microsoft, IBM and Oracle,” the paper wrote.

The HQ2 move also had huge tax implications. Amazon in one fell swoop seems to have more than doubled its existing subsidies.

The Good Jobs Institute had Amazon’s pre-HQ2 number at $1.6 billion in American tax breaks nationwide, at over 150 locations. In HQ2 alone it scored over $2 billion: $1.5 billion in New York, and just over half-billion in Crystal City.

To give an example of how much money that is: The Virginia offices promise to create 25,000 jobs in return for that $573 million in tax breaks. That works out to about $22,000 in incentives per job. The deal with New York is sweeter.

The contract even obligates the state to secure access to a helipad for Team Bezos. This is the “just to be dicks, we’ll ask for this” provision, like a rock band demanding a jar of green M&Ms at the end of a whopper gate-receipt deal.

To recap: a company whose profits soared 27 percent to $3.03 billion last year just received an additional $2 billion or more in tax breaks, and may also be in line for $10 billion more in tax money through the JEDI deal. 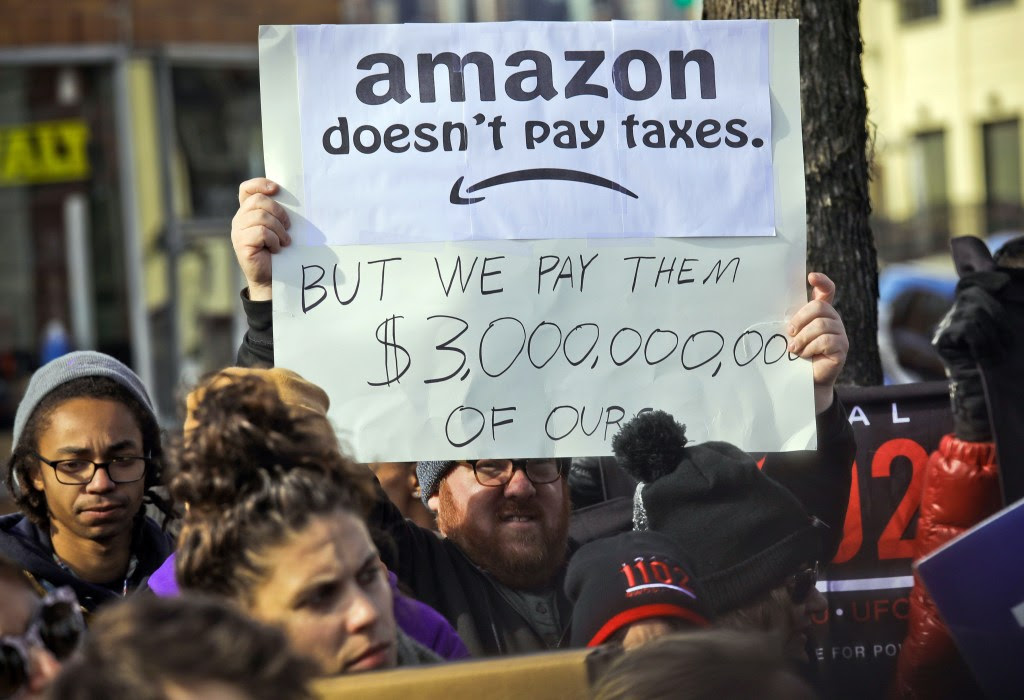 Bezos is personally worth over $150 billion, some $55 billion more than Bill Gates. Bezos’ net worth fluctuates about the size of the GDP of Burundi every time someone sneezes at the NYSE.

This is the same company that had to be hounded into agreeing to a $15 minimum wage. It only folded after Sen. Bernie Sanders threatened to tax it for state welfare payments to its employees. That the more standard official treatment of this company is the gushing handover of tax relief says a lot about the role of government in modern America.

Amazon last year effectively paid nothing in federal tax. Worse, thanks to the tax cut approved by Donald Trump, who ironically has ripped Amazon for not paying taxes, the company will reportedly receive a one-time $789 million windfall for last year — in addition to the goodies it just received this week.

Deals like this are the result of years of gradual breakdowns in oversight, allowing officials like New York Governor Andrew Cuomo to essentially negotiate unilaterally. They are dangerous for the same reasons the financial bailouts after 2008 were dangerous: They make the government a long-term partner with giant, hyper-concentrated corporate entities.

No population genuinely worried about abuses of power would even countenance placing a single private company in control of securing the data of both the intelligence community and the armed services. Add putting a major media organ or two under the same umbrella and you’re beginning to enter oligarchy territory.

Moving Amazon closer to America’s political and financial capitals isn’t just about creating a few jobs. It’s also a symbolic move that speaks to the unsettling co-mingling of state and corporate power. We might wake up soon and wish we hadn’t put so many eggs in one basket.

Editor’s note: This post has been updated to note that The Washington Post has a practice of disclosing its financial ties to Jeff Bezos in its coverage related to Amazon.