What Will Congress Do If Trump Tries to Fire Mueller? - Rolling Stone
×
×

Capitol Hill is still reeling from this week’s bombshell announcement that two senior Trump campaign officials have been indicted and another one has pleaded guilty in the independent investigation into whether there was collusion with Russian officials in the 2016 election. While many Democrats are now clamoring to take legislative action to protect special counsel Robert Mueller from the wrath of President Trump, Republicans are internally debating what role, if any, they should play in this investigation of the president from their own party.

While Trump is reportedly fuming and looking for ways to end the continued negative scrutiny those in his orbit are receiving, the announcement of the guilty plea from George Papadopoulos, a campaign foreign policy adviser, for lying to the FBI about his attempt to set up meetings with Russian officials and senior Trump campaign staffers is spurring lawmakers on Capitol Hill.

“I think maybe the most direct significance was one more example of Russians with a targeted outreach to senior levels of the Trump campaign with dirt, so-called dirt, and emails of Hillary Clinton,” Sen. Mark Warner, the top Democrat leading the Russia investigation in the Senate, tells Rolling Stone.

Now Democrats fear Trump may take steps to push Mueller out in order to bury the investigation that seems to keep getting closer to him and members of his family. There are two competing bipartisan proposals floating around the Senate that would set up barriers to protect the special counsel from being ousted by the president. And with the investigation heating up, Democrats are itching to pass the bills quickly.

“I think it’s more important than ever that we send a signal that the legislative branch is going to insist that the executive branch follow the rule of law and follow an order that makes it possible for this investigation to get to the bottom of what’s happened or not happened,” Democratic Sen. Chris Coons tells Rolling Stone.

Steve Bannon, the former White House chief strategist and chairman of the alt-right website Breitbart, is calling on Trump to play hardball against Mueller by blasting him and his investigation from his bully pulpit and to even go so far as withholding documents he requests. Democrats on Capitol Hill are worried Bannon still has the ear of the president and many Republicans in Congress.

Coons and Republican Sen. Thom Tillis have teamed up on a bill that would allow the special counsel to contest any firing, while Sens. Cory Booker, a Democrat, and Lindsey Graham, a Republican, have offered a bill that would require judicial review before a special counsel could be ousted. But the Republican sponsors of those bills say Monday’s announced indictments haven’t changed anything, and they say Democrats are just overreacting. 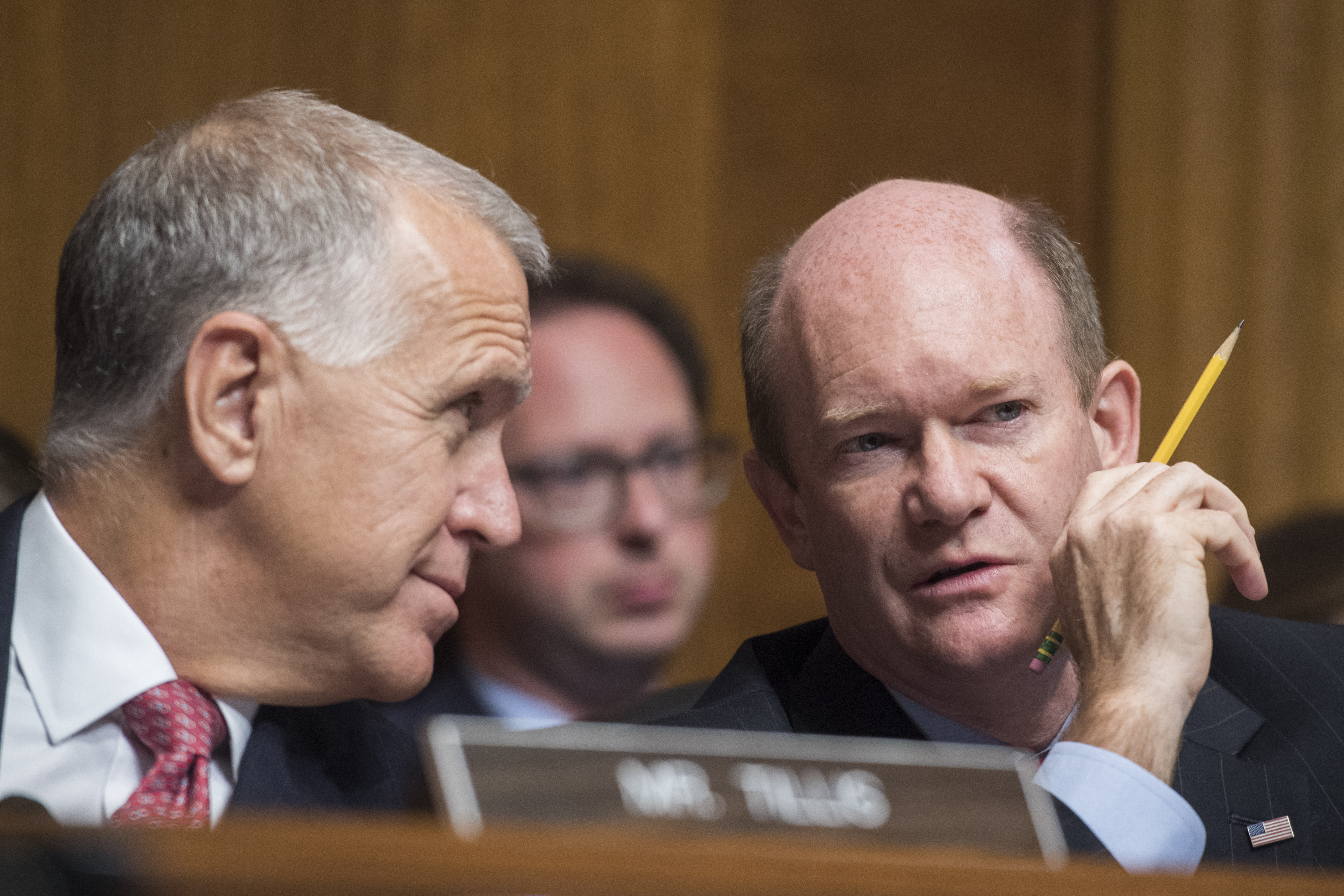 “There’s no evidence, no suggestion at all, that the president is going to do anything with Mueller,” Graham tells Rolling Stone. “Trust me, I don’t believe there’s any movement at all by anybody in the White House to get rid of Mueller.”

At the Republicans’ weekly policy lunch with Vice President Mike Pence on Tuesday, Mueller and the news that’s the talk of Washington this week never even came up. Tillis says he and most Republicans trust the president. He says his bill is more about constitutional principles than about sending a signal to Trump.

“This is a part of a process over things I intend to do over the next few years that relate to Congress reasserting itself where we think we should – it has nothing to do with who’s in the White House right now,” Tillis tells Rolling Stone.

There is also a proposal in the House pushed by Republican Rep. Ron DeSantis to only fund Mueller’s investigation for six months, but some in the GOP say, while they’re open to that idea, it’s premature.

“I don’t think anybody should carry on any investigation forever and ever,” says Republican Sen. Richard Shelby. “And let’s see how broad his scope is and see if he’s going to go after what the Democrats did. And if he does that then you say, ‘Well, you got a bipartisan investigation.'”

Other Republicans say no legislation is needed to protect Mueller because they think Trump wouldn’t be foolish enough to fire the special counsel.

“The reaction would be just phenomenal. Most Americans would not agree with such a thing any more than they agreed with Richard Nixon firing that group,” Republican Sen. John McCain told reporters at the Capitol. “The American people want a complete and thorough investigation. That’s one thing I know.”

But the Democrats who are at the center of this push to protect Mueller say their GOP colleagues tell them when they speak with them in private that they’re open to supporting their proposals – the announcements Monday really shook many in the party.

“There’s a lot of disquiet and concern about the possibility the president could do something impulsive and misguided,” Democratic Sen. Richard Blumenthal tells Rolling Stone. “I think right now they’re dealing with the shock and awe of the indictments and conviction. I think they have yet to focus on responding with any sort of action. But I think that we need to push ahead with this legislation and seek to put the president on notice that there will be a firestorm … unlike anything we’ve seen since the Watergate Saturday Night Massacre.”

Democrats are also trying to win over support from the other side of the aisle by pitching the proposal as something much broader and longer lasting than something merely focused on Trump.

“There’s something that’s not right with this law that gives such an imbalance of power to a president, regardless of who that president is, in their ability to unilaterally order the, in this case, acting attorney general … the power to fire a special prosecutor,” Democratic Sen. Cory Booker tells Rolling Stone. The new proposal “is I think a very common-sense, credible way to go – for not just this moment in history, but for 20 years from now, for 40 years from now, for 100 years from now.”