KHARKIV, UKRAINE — The anxiety gnaws at you every minute that you are awake and most of the minutes you are asleep. It jolts you out of dreams. I meet Ilya, 24, in line for the one supermarket that is open in the slushy snow and my hands are shaking a bit typing on my phone as he speaks, but probably just because it is cold. “It’s absolutely terrifying,” he says. He keeps fidgeting with his mask and swaying back and forth and neither of us are doing particularly well with eye contact. “From this point, I have no words,” he says. “I didn’t expect it.… I didn’t expect it was going to go this far.”

When the shelling starts, Ilya and his mother go into a shelter near them, like almost every civilian living in Ukraine right now. They spent last night in one. He looks tired. When we woke up this morning, Kharkiv was blanketed in snow; a layer of thick white slush just cold enough to cling to sidewalks and roofs.

“If people drop bombs from planes, all of these buildings, all of our architecture, it will be destroyed,” Ilya says. “People don’t understand the whole situation, how much more terrifying it’s going to be.”

Yesterday the Russian military attacked the entire country of Ukraine with a wave of precision missile strikes aimed at key military facilities and infrastructure. The explosions, which woke people in major cities across the country shortly after 5 a.m., were almost immediately followed by a ground invasion by Russian forces to the North, East, and South of the country, flowing over Ukraine’s border in tanks and ships and helicopters. In Kharkiv, where I am, tanks poured through the border just 30 miles from the city center and quickly engaged Ukrainian forces, setting off fierce fighting that has occasionally spilled toward the city center, where Ilya and his mother waited in line to buy food and looked at the buildings around them.

'The Tipping Point.' Ukraine's Advance May Be the Deadliest Yet

You can still see the beauty he is talking about: the strict lines of Constructivist government buildings buffering massive public squares, flowing into residential neighborhoods filled with two-story houses built from Kharkiv’s red brick, anchored by the massive Stalinist Empire train station. Right now, much of it is still intact. I had spent so much time thinking about what would happen to the people of this city — and myself — that I hadn’t thought about the buildings that made it up. 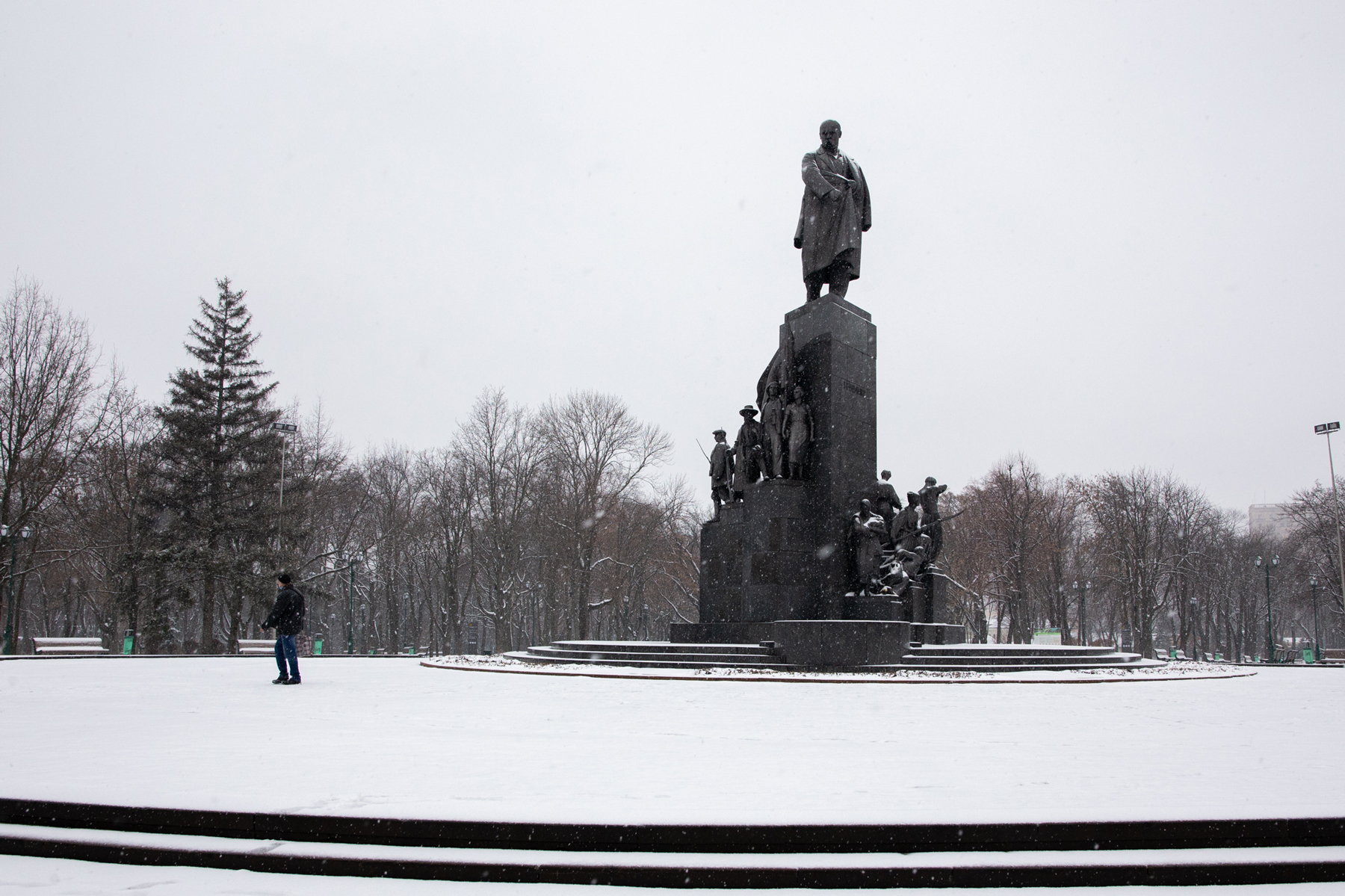 Fighting in Kharkiv has been fierce, but as of yet, appears to still be confined to the north and east outskirts of the city. In Kyiv, the country’s capital, things are more dire. The Russian army is closing in from the West and the North, and when we woke up, the news was screaming of aerial bombardments. Ukrainian TV allegedly is broadcasting the recipes for molotov cocktails and the government is distributing tens of thousands of assault rifles to civilians who want them. Back here in Kharkiv, we watched a sedan pull up outside of a bank on an empty street and spit out three men in civilian clothes and body armor who immediately began unloading Kalashnikovs and grenades from the trunk. They said they were “volunteers.” One of them shoved a pistol into the front pocket of his jeans.

When no bombs are falling, things are calm. There is no other choice in war but to go about your business normally when you are not in direct danger — no one can sprint and duck and run every minute of their lives, even if the stress never leaves. The shells are getting a little closer to the city center, though; a volley of SMERCH missiles sent us into the hotel’s underground car park just after breakfast this morning, and after hearing the blast from the supermarket, we walked briskly back, the bass drumroll of an MLRS barrage echoing over buildings from a neighborhood just a few kilometers away. An ambulance screamed down the road away from the direction of the shelling. A police car screamed up the road toward it. 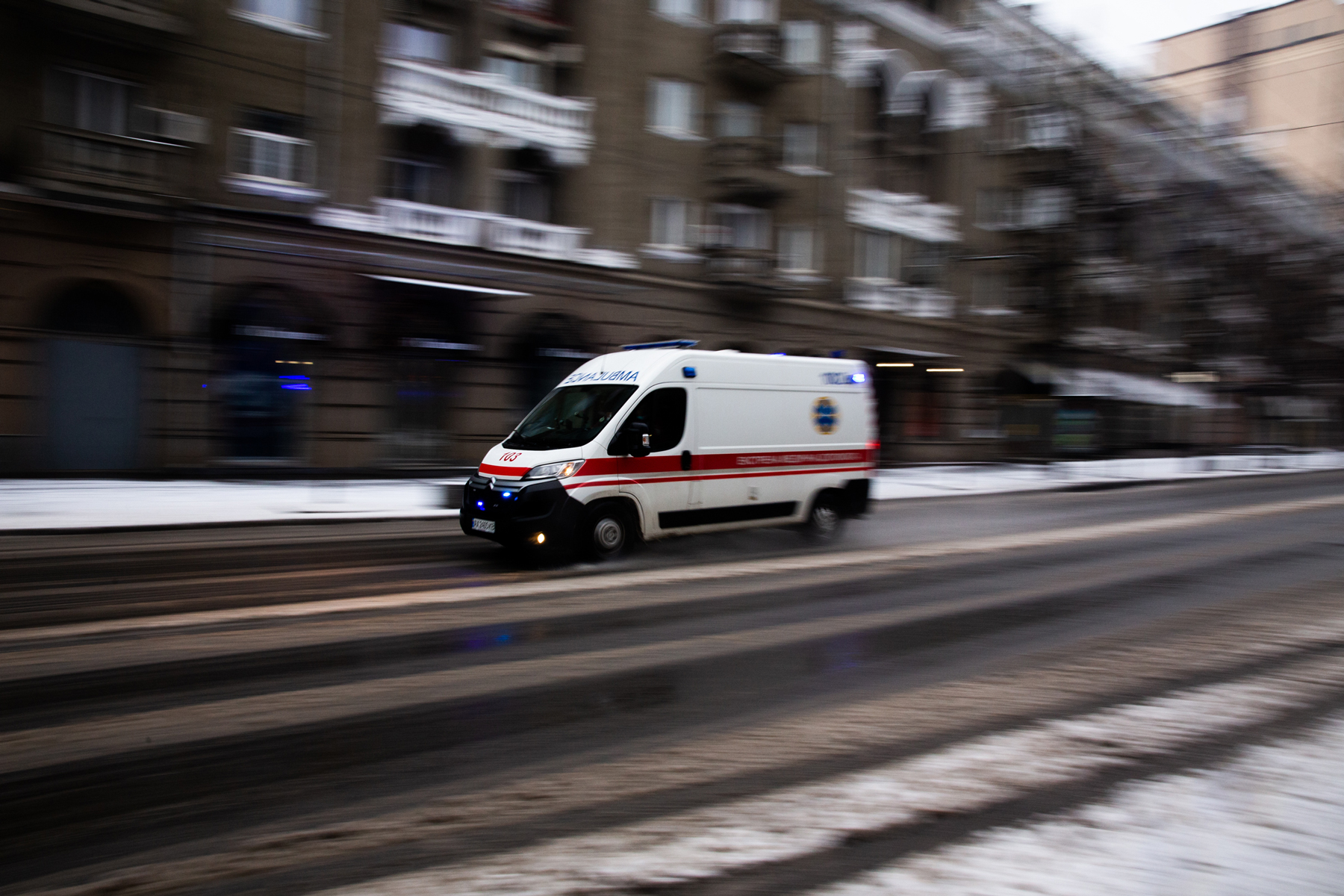 There are other disturbances as well. Before the supermarket, we (a reporter from Foreign Policy and I) walked by a national-guard barracks in the city, where soldiers were unloading crates of weapons and ammunition from canvas-covered trucks. They wouldn’t let us inside, but offered us a cigarette and while we smoked it, told us that the Russians are driving around the city in civilian clothes and in civilian cars and trying to cause problems. In Kyiv, too, the Ukrainian army claimed to have caught a patrol of “saboteurs” dressed in Ukrainian army uniforms that had allegedly managed to penetrate deep into the city’s northern Oblonski district. These are, of course, claims and allegations. I have not personally seen any cars full of Russians driving around the city causing problems, but then again it’s not like I’d recognize them as Russians in the first place unless they stopped to ask for directions. But this is a war, and it is natural to believe most credible rumors you hear because the insane, absurdist, utterly terrifying reality of what is happening around you makes everything seem in the realm of plausibility.

“Just logically it makes no sense. It’s illogical! It’s just beyond my understanding. I never expected it to,” Alex, a 63-year-old court reporter from St. Petersburg, Florida, tells me. He was pulling a small suitcase that he had left at a friends’ house and was on his way back home to a rented flat that he had intended to check out of today. Alex was in Kharkiv to get dental work done. He was born in St. Petersburg, Russia, but since 1986 he has lived in St. Petersburg, Florida (“Zip codes are different,” he says). He says he’s a U.S. citizen who has four children and an ex-wife in Florida and that he was supposed to fly back home on Turkish Airlines this weekend. I asked him how he felt about ending up in all of this, and if he considered the tensions before he came. “I made the wrong choice,” he says, laughing.

It’s not Alex’s fault — he didn’t start this. Alex just wanted to get his teeth fixed. Putin wanted a war. They both got what they came for.