Donald Trump sent his attorney general out Tuesday to announce that the president will rescind the Deferred Action for Childhood Arrivals program, or DACA, in a transparent attempt to evade responsibility for his decision to end the popular and successful effort. DACA has allowed some 800,000 people who came to the U.S. before age 16 to live, work and go to school without fear of being deported to countries many of them have never known.

Though Trump claimed he would “deport them all” while campaigning, he later promised to address DACA with “great heart.” Shortly after being elected, he explained, “We’re going to work something out that’s going to make people happy and proud. They got brought here at a very young age, they’ve worked here, they’ve gone to school here. Some were good students. Some have wonderful jobs. And they’re in never-never land because they don’t know what’s going to happen.”

Why Trump's Arpaio Pardon Is So Terrifying

Trump’s hardline campaign promise left him in a difficult position. Even he apparently intuited that it isn’t fair or wise to deport kids who have grown up in the U.S., nor consign them to second-class status by forcing them to work off the books and blocking them from pursuing an education. Over 75 percent of Americans support the DACA recipients – often referred to as “dreamers” because their legal status would be regularized by the DREAM Act if Congress passed it – as do religious leaders advising Trump and business heads, whose companies stand to lose billions of dollars if the program ends.

But despite the widespread support for the program and Trump’s claim to “love these kids,” he has proven unable or unwilling to disappoint his ever decreasing base or the staunchly anti-immigration faction in his administration and the Republican Party.

Republican attorneys general from a number of states, possibly encouraged by Trump’s own AG Sessions, threatened to challenge DACA in court unless Trump rescinded it by this week. Instead of telling them to go to hell – as we’d expect of Trump if he genuinely cared about protecting DACA recipients – Trump is using the sketchy legal argument the AGs laid out in their letter to claim his hands are tied.

DACA opponents claim President Obama exceeded the authority delegated to him by Congress by implementing DACA. That has not been a winning argument in court. There are more than 11 million undocumented immigrants in the United States, and Congress only allocates enough funding to remove a small fraction of them. Thus, the executive branch necessarily has to decide who to prioritize deporting and who to let stay. DACA’s “deferred action” does just that, giving qualifying undocumented immigrants who come forward and pass a background check a two-year authorization to live and work in the country. 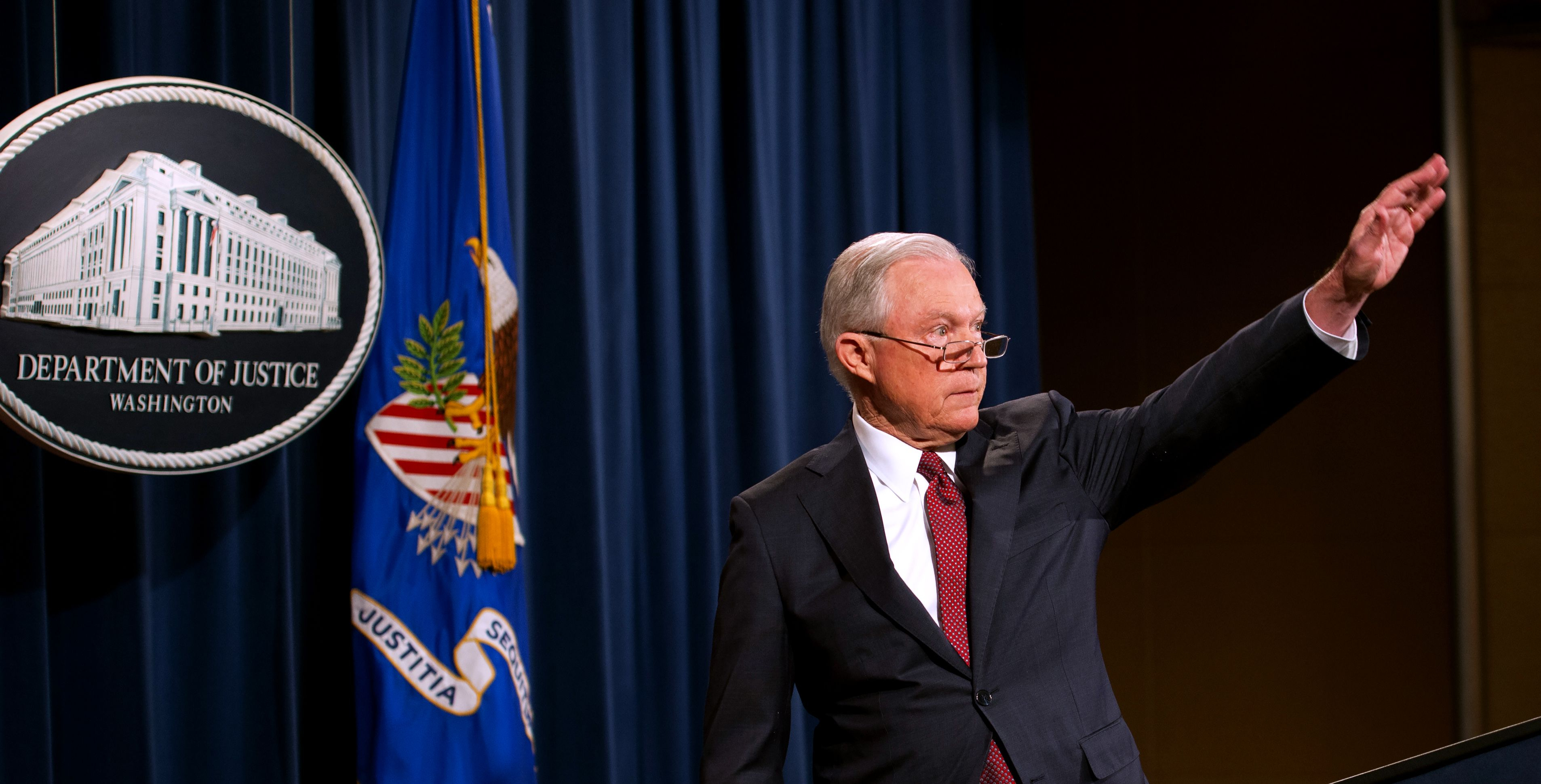 But Trump is claiming he doesn’t have that authority in order to pass the buck to Congress. He is partially delaying the crack-down on DACA recipients for six months, while telling Congress, as he put it on Twitter Tuesday, to “get ready to do your job – DACA!”

This attempt to blame what happens to DACA recipients on Congress is stunningly hypocritical, even for Trump. In the context of the Muslim ban, Trump has argued in and out of court that immigration policy is not only his job, but that his powers in that area are virtually unlimited. Multiple courts have found that, in fact, the Muslim ban is outside Trump’s authority. DACA, on the other hand, is the kind of policy decision about how to enforce immigration law that presidents have to make.

Trump claiming that his powers are too limited to allow DACA to continue is even more absurd in light of his general refusal to accept well-established limits on his power. His response to courts doing their jobs by keeping him – and buddies like former Sheriff Joe Arpaio – from acting outside the law has consistently been to attack those courts. Trump’s legal theory in every other context is that he is the biggest and the baddest, so he gets to do whatever he wants, Constitution be damned.

But despite disdain for the rule of law having been the defining characteristic of Trump’s presidency, Jeff Sessions said with a straight face Tuesday that ending DACA was about “strengthening the constitutional order and the rule of law in America.”

Using this ill-fitting separation of powers argument to blame the end of DACA on Congress allows Trump to evade even telling the public what he would like the policy to be. If he genuinely believed DACA recipients should be allowed to stay but that only Congress has the authority to let them, he would endorse the legislation that would do that – the DREAM Act – and then whip votes to get it passed. Trump purports to be the ultimate dealmaker – if he believed the story he’s trying to sell about the legal infirmities of DACA, he’d endorse a plan to simultaneously rescind and replace it by getting a Congress controlled by his party to pass a bill that failed by only five votes last time around.

From his simultaneous action and inaction on DACA, one must conclude that Trump is either a liar or a wimp: He loves executive orders and thinks the president’s authority is extremely broad, so either he doesn’t really care about the DACA recipients or he lacks the spine to stand up to the hardliners.

Once again, the president is breaking promises made by the United States. DACA recipients came out of the shadows, essentially turning themselves in to the government due to assurances they would be allowed a fair shot. But now Trump is sending them back to the “never-never land” he claimed he’d protect them from.

Attorney General Jeff Sessions announced that the Trump administration will end a program that shields from deportation, young immigrants, brought to the U.S. illegally as children. Watch here.