If you tuned into the State of the Union address last night, you witnessed President Trump enrage Democrats as Republicans fawned over most every word and gesture delivered by their party’s leader. But even with around-the-clock coverage of the nation’s most-watched annual political event, there’s much that goes on at the Capitol before, during and after such an affair that you can’t see on your screens, from the multi-layered security employed to keep the event safe to lawmakers behaving like tweens to be seen with the president.

Here, a quick rundown of some notable items that you missed if you weren’t in Washington last night for the president’s first State of the Union.

1. The Capitol smells worse than a college dorm.
Ahead of the State of the Union, a smell wafts across the Capitol, something akin to a greasy diner or college dorm room during finals week. That’s in part because hundreds of reporters are locked in place for one of their longest days of the year, which means they order massive quantities of tacos, Peruvian food (take that, Trump!), pizza or Chinese takeout.

But the mismatch of competing smells also stems from the numerous events lawmakers hold for themselves, their families and guests before the address. Most of these events are partisan affairs, with Republicans popping in and out of, say, House Majority Leader Kevin McCarthy’s office as Democrats trek to Minority Leader Nancy Pelosi’s little wing. But at least one Republican congressman says he stopped by an event hosted by House Minority Whip Steny Hoyer. Asked if it was a bipartisan event, the lawmaker laughed, “They didn’t tell me I couldn’t come in.”

2. Just about everyone on the Hill was getting drunk.
The night of the State of the Union, booze flows freely at the Capitol. While reporters aren’t invited to most of the official events, and are strictly forbidden from others, lawmakers report there’s plenty of liquor, wine and beer to go around. That’s because lawmakers of all stripes need to fortify themselves ahead of any speech that lasts more than an hour. And after the speech, the bottles of whisky and beer start getting popped in the competing press galleries that are sprinkled across the massive Capitol complex. It’s hard to be the enemy! 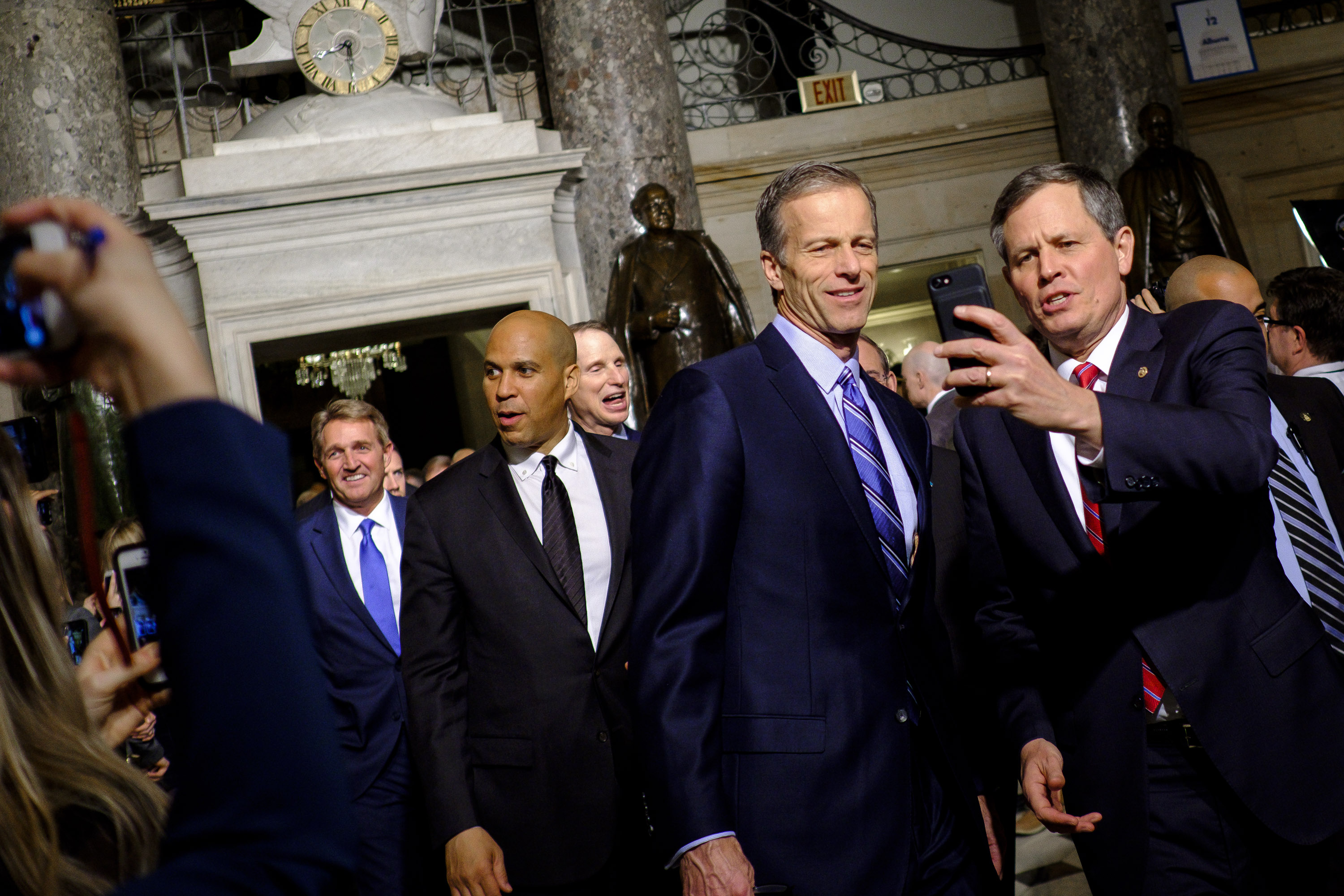 3. The rest of the city is pretty drunk, too.
There are only a limited number of people able to view the State of the Union in person, but in D.C., everyone watches it. And in this hyper-partisan atmosphere, that means just about everyone in the nation’s capital is drinking – a lot. Being the good capitalists they are, many bars in Washington entice customers in with State of the Union specials and drinking games as they put the address on all their screens while blasting the president’s speech on their loud speakers.

One pub that’s a stone’s throw from the Capitol complex, Union Pub, offered a specialty drink called Fire and Fury, honoring Michale Wolff’s recent bestseller. And, much like Trump, Shaws Tavern went straight partisan and split guests into Red and Blue teams, and gave the teams terms like “America First,” “Middle Class,” “Fake News,” “Billions” and “Jobs.” If the president used your term, you drank. And another bar on the House-side of the Capitol, Barrel, offered free shots every time Trump said “Fake News.” Didn’t happen. Thanks anyway, Trump.

4. Lawmakers behave like little kids.
For most of us, the State of the Union begins when the Sergeant at Arms’ voice booms: “Mr. Speaker, the President of the United States of America.” As the president enters the chamber to a standing ovation and much raucous, cheering, there’s always an eager group of lawmakers lining the center aisle who thrust their hands out for the president to briefly grasp as the he slowly makes his way to the speaker’s rostrum. Those lawmakers whose faces are seen by millions didn’t get those seats by accident – they have to wait and guard them for hours. It takes childlike dedication to a cause to get those coveted seats – think of the lines of young teens who camp out for hours or even days to score tickets for Katy Perry or Bruno Mars.

This year, just about every lawmaker along that coveted aisle was a Republican who represents deep-red Trump country, like Representatives Louie Gohmert of Texas, Billy Long of Missouri and Mark Walker of North Carolina, who were seen protecting their seats hours before the address kicked off. In the past, Democratic Rep. Elliott Engel of New York was always the first to arrive in the House chamber, often as early as 8 a.m., to claim one of those prized seats. While Engel attended the speech ­­– unlike some of his Democratic colleagues – he also broke precedent and held his own peaceful protest this year by avoiding the most-watched aisle during the address.

“I don’t agree with what the president’s doing, and I don’t want to show any kind of approval,” Engel told Rolling Stone before the address. “Now, I hope he’ll change some of his policies and if he does, I’ll revisit it in the future, but right now, I don’t want to make it like business as usual.” 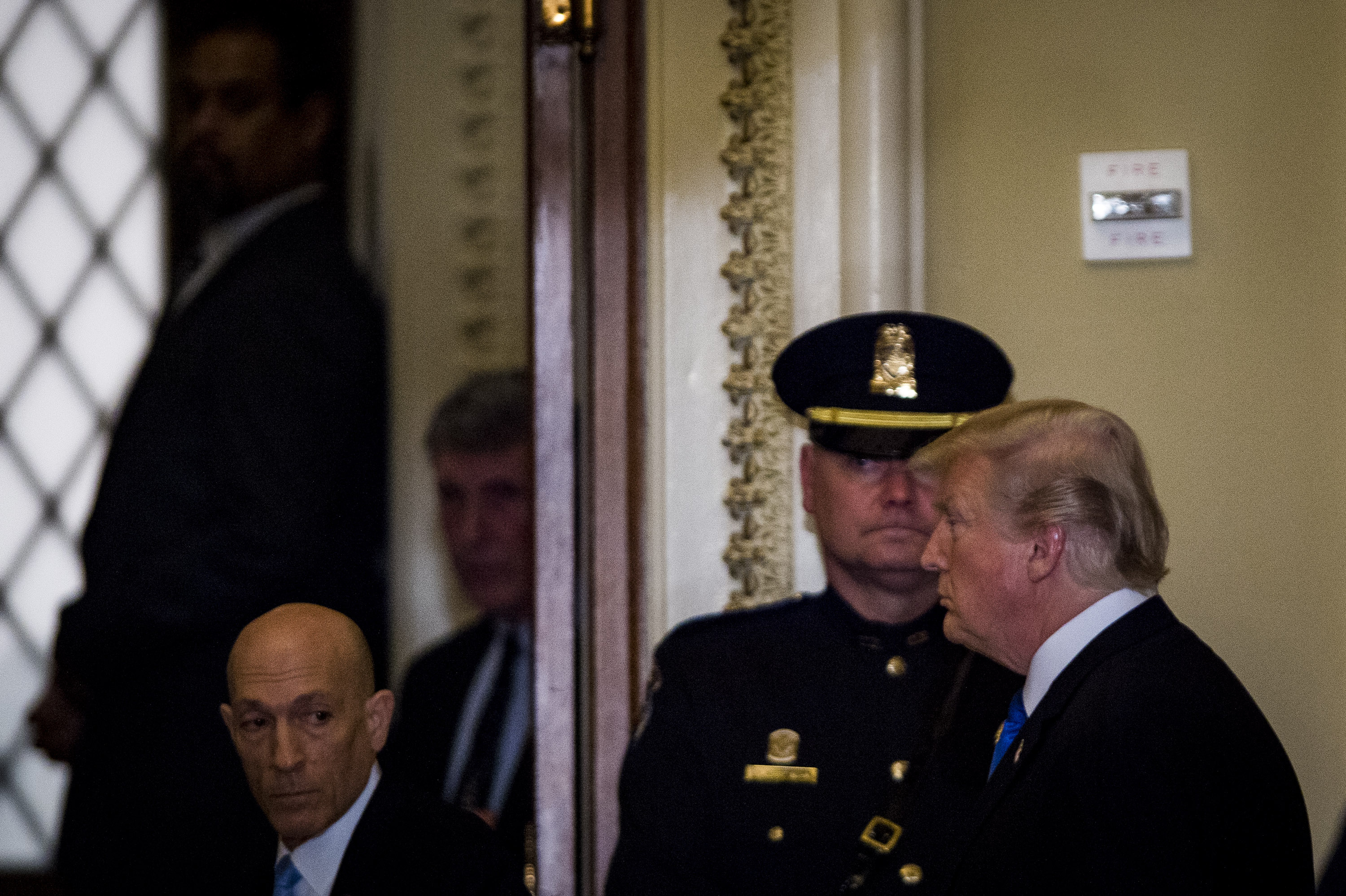 5. The Capitol is a fortress during the address.
We all know there’s one member of the cabinet tapped to stay away from the Capitol in case the worst happens – this year it was Agriculture Secretary Sonny Perdue – but the nation’s sprawling security apparatus descends on the Capitol to prevent that. They go to astounding lengths to protect the complex for the speech, their reach extending far outside of the Capitol. And I’m not just talking about the monitoring of online chatter and international calls that the NSA, FBI and CIA start conducting weeks ahead of this high profile affair.

A couple hours before the address, officers set up barricades that shut off all the streets immediately surrounding the Capitol to traffic. Congress is one of the most open and accessible legislative bodies in the world, but tours of the most photographed building on the globe are forbidden starting at noon on the day of the speech. That’s when police K-9 units are sent to sniff out every inch of the building, and when uniformed Secret Service agents begin their sweep, shining flashlights in every crevice, down to the elevator shafts. Outside, snipers lay watch on the surrounding buildings, as mobile command centers, hazardous material big rigs, fire trucks, ambulances and some armored vehicles roll into place.

But as CNN’s countdown clock winds down, hundreds of guests are forced through four new body scanners on the third floor of the Capitol before they can enter the balcony overlooking the House floor. And on the second floor, where the chamber is, officers lay out dozens of black duffel bags filled with emergency escape hoods that are meant to protect the nation’s political class in the event of a biological or chemical attack. There are also dozens of members of a response force who sit outside the Capitol rotunda outfitted with respirators, hard hats and other mysterious black bags in case they need to rush into action during an attack. And during the address, on a cold, windy winter evening, motorcycle and bike police rolled across the barricaded grounds.