The first presidential debate of 2016 was nearly totally humiliating, even if it wasn’t the humiliation that Hillary Clinton’s supporters wished for. Their candidate missed opportunities to deliver a killing blow, instead frequently remaining silent and letting Trump do all the work. No, what was humiliating was watching a candidate, after only a little provocation, completely disassemble his own campaign legend.

Going into last night, the 24-hour news media was determined to set the stakes high for Clinton, low for Trump, remonstrate with themselves for establishing such unequal standards, then keep returning to them anyway.

Trump slunk beneath the lowest expectations. The man dismissed as the most ignorant, uncivil and unprepared major-party candidate in history could not have conducted himself more poorly if his goal was to vindicate all the haters and losers who bedevil him.

Trump’s debate conduct is destined to become a future candidate-training video of what not to do. He sniffed into the mic constantly and grunted again and again. He leaned forward and to the left of the podium, toward Clinton, glowering in between his almost constant interruptions — many of which topped out at repeating the word “wrong.” Clearly someone in the Trump campaign must have pleaded with him to not interrupt and reject a woman candidate without evidence and thus reinforce charges of misogyny, and clearly whoever that person was wasted his or her day.

If Home Is Where the Heart Is, Donald Trump Has No Home

When Holt countered Trump’s comments about stop-and-frisk by correctly noting that the practice had been deemed unconstitutional, Trump replied, “No, you’re wrong,” before elaborating with, “it went before a judge who was a very against-police judge.” When presented with his previous comments about Clinton not looking presidential, he tried to pivot to the last few months of conspiracies from the right-wing fever swamps that claim Clinton is afflicted with some wasting disease. (Best guess: chemtrail-induced morgellons.)

The most ironic part of the assertion is that, by this time, Trump’s stamina had clearly flagged. But the humor of the assertion was dwarfed by his comments from a few minutes before. In order to distinguish himself from Clinton, Trump said, “I have a much better temperament.” The audience responded with a sudden surge of laughter. 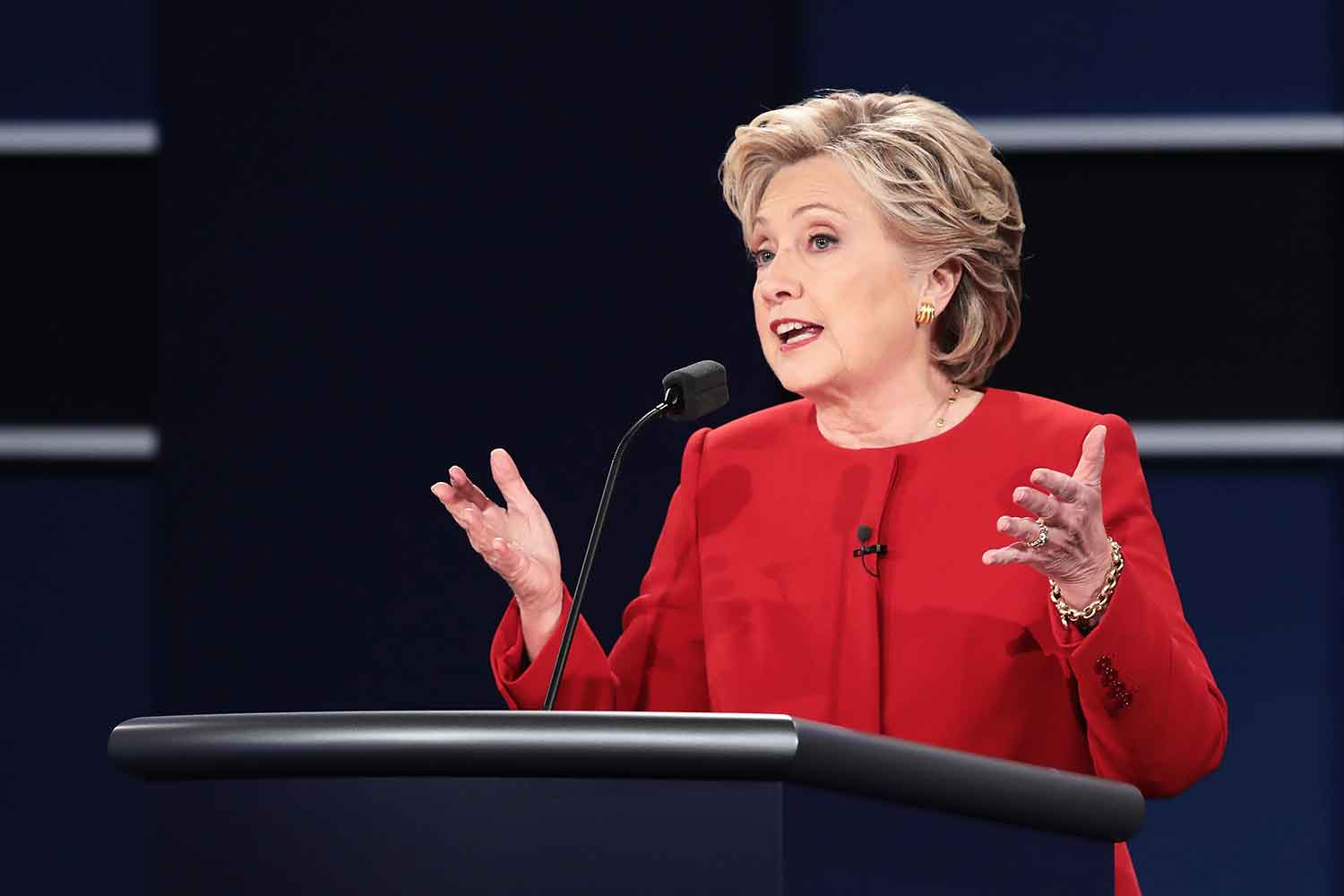 On actual issues, Trump was almost entirely a shambles. His answers on nuclear weapons never rose above the level of gibberish. He described America as a third-world country, an assertion rejected by almost any measure of prosperity you can cite. He again asserted that African-Americans and Hispanics are “living in hell,” which – America’s treatment of minorities notwithstanding – might be news to many of them.

More importantly, Trump appeared completely unprepared to handle the most obvious attacks that would be directed against him.

Trump had no satisfactory explanation for his years of enthusiastic birther conspiracy mongering, and his attempt to obfuscate the issue relied on the sorts of conspiracies familiar only to voters who spend a lot of time reading right-wing websites plastered with ads for dick medicine, gun hoarding and Atabrine tablets. If you already knew who Sidney Blumenthal is, you either already knew that the Hillary Clinton campaign didn’t invent the Obama birther rumors, or you are someone who expects Clinton to have Sid rubbed out like Vince Foster and a bunch of Arkansas prostitutes.

Once more, Trump deemed his birther crusade a great success, citing Obama’s release of his long-form birth certificate in 2011. Unfortunately, Holt pointed out that “you continued to tell the story and question the president’s legitimacy in 2012, ’13, ’14, ’15, as recently as January.”

Holt continued, “I’m just going to follow up. I will let you respond because there is a lot there. We’re talking about racial healing in the segment. What do you say to Americans—”

“I say nothing because I was able to get him to produce it,” Trump said. “He should have produced a long time before. I say nothing, but let me just tell you.”

He went on, but the damage was done. When the context of the conversation deals with African-Americans who have watched you malign the first African-American president as un-American, your first response cannot be that you have nothing to say to them.

Trump likewise had no explanation for his refusal to release his tax returns and disclose not only his real wealth but also his overseas interests that may conflict with the responsibility of steering American foreign policy. Instead, he returned to his claim that he was told not to release his returns until the conclusion of an IRS audit. When pressed on the fact that this is total BS, he again said that he would release his tax returns if Clinton released “all 30,000” of her State Department emails.

It’s a nice gambit, but it overlooks the fact that releasing tax returns is just something that all major presidential candidates do and have done for decades. Tax returns are part of the job application process. They are not a tool for leveraging extra concessions out of your opponent. You release them or you don’t. It’s on you.

Even if Trump seemed determined to make the debate a total surrender, Clinton’s game wasn’t perfect.

Clinton enjoyed moments of real laughter and broke into an irrepressible grin during parts of the night. For supporters, it must have been fun. Clinton is not a natural retail politician, and part of what belies her forced laugh and smile on the stump is the fact that the genuine articles are both unmistakable and charming. That said, you could see the conservative critique forming as her smile lingered and before she burst into laughter and asked, “Why not, yeah why not? Just join the debate by saying more crazy things.”

Clinton supporters will note the sexual double-standard: Men always tell women to smile, then get annoyed when they smile without invitation. But while Clinton has been victim to this kind of double-standard for nearly a quarter century, any male candidate would expect to take a few shots for indulging in prolonged self-satisfaction at an opponent’s implosion.

It’s not wrong that Clinton enjoyed Trump flailing around her; it’s just that, by the joyless rules of modern politics, nobody is allowed to enjoy that sort of thing too much. This is more or less the same critique Obama backers leveled at the simperingly indulgent smirk Mitt Romney wore throughout the first 2012 debate, as if he were trying to channel a smile that said, Well, there you go again… 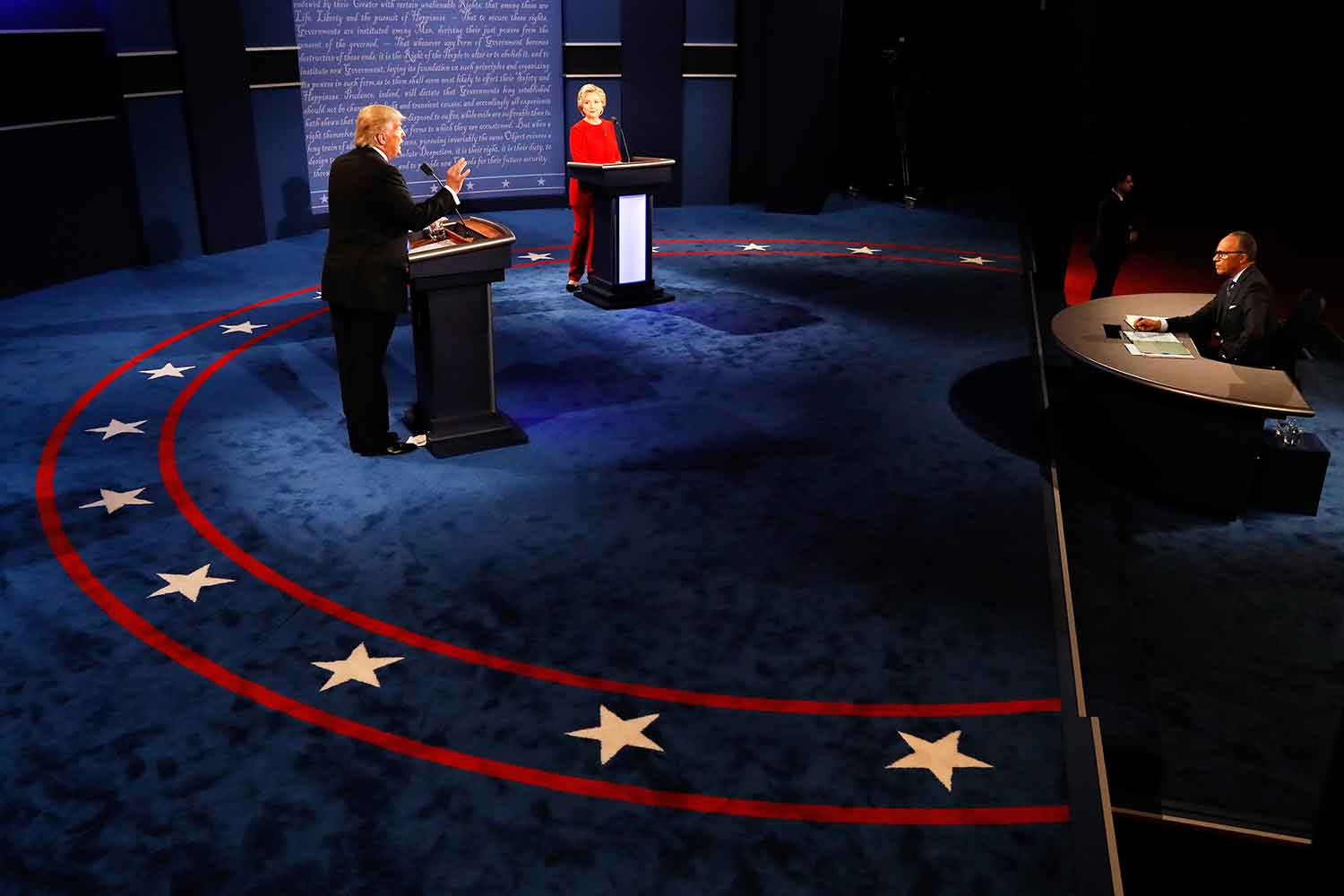 On more concrete issues, Clinton still lacks a convincing policy on trade, an issue that Trump owns this election. Trump effectively criticized her for her support for NAFTA and the TPP, which she only rejected after Bernie Sanders made it politically toxic. No one but Clinton die-hards really believes she plans to keep opposing the TPP, if for nothing more than the fact that Clinton and Obama spent 2008 carping about NAFTA before going on to do fuck-all about it.

Last but not least, Clinton missed a huge opportunity during the exchange about Trump’s taxes. Clinton pointed out that Trump’s financial statements “for a couple of years where he had to turn them over to state authorities when he was trying to get a casino license … showed he did not pay any federal income tax.”

Trump replied, “That makes me smart.”

While America might be a nation of 300 million temporarily embarrassed millionaires who see no problem in principle with evading taxes because they will eventually be in Trump’s position themselves, there’s a lot to make of a statement like this.

Clinton was on a roll, clearly hoping to get through prepared material, and she let Trump off the hook with all the people who play by the rules. Are they stupid? Are people who obey the law morons? Is everyone who thinks they should pitch in for roads and schools a chump? And how ethical are Trump’s smarts? Is he legally paying zero taxes, or is he putting himself on the same plane of financial genius as Al Capone?

In the end, Clinton’s few missteps didn’t matter, because there was one overwhelming conclusion to be drawn from the night: Trump looked incompetent because he’s no longer only standing next to other Republicans.

Aside from the repugnant racism, xenophobia and misogyny, the Trump phenomenon remained amusing for months because it felt like it was engineered in some fouler deity’s ironic punishment laboratory. Donald Trump flagrantly made shit up every moment he wasn’t bullying everyone around him; it’s just that his victims were a bunch of wealthy bullies who’d spent their careers haphazardly making shit up and sliming their way upward like a phalanx of slugs conquering a staircase.

Trump cut through over a dozen Republican candidates like an industrial saw shredding a box of Kleenex, and it couldn’t have happened to a more dismal gallery of frauds. After years of complaining about deficits while promoting tax cuts that reduced government revenues by trillions, after years of promoting dominionist Christianity while claiming religious discrimination, after years of claiming to be victims while blaming everything wrong in America on homosexuals and college professors and minorities and Islam, after years of saying whatever the fuck they felt like and repeating it until it sounded true, each one of these blow-dried mediocrities got fired from The Apprentice: Republican Party by someone with even more sociopathic contempt for facts, logical consistency and other human beings than they had.

Hell, it wasn’t even difficult. Just coming up with mean nicknames was enough on a stage teeming with their brand of puffed-up prevaricating nincompoopery. Donald Trump wasn’t a legendary force, and he wasn’t a ruthless killer. He was the only guy with a fork in a room full of inflatable clown punching bags – shoving them and waiting for them to rock back and forth, their fixed idiotic grins leaning into the fatal puncture.

Unfortunately, this debate and the rest of the campaign will be conducted in the closest approximation of the real world that American politics can provide. The record still sort of matters, and most of us can remember history as far back as goddamn yesterday. We remember that Donald Trump can’t keep a story straight for 24 hours.

Many more of us can remember back a few decades and realize that even the most dishonest predators elected to our nation’s highest office put in time and training to achieve a patina of “not overtly malicious” and the imperturbable expertise of the diligent halfwit.

And while we might not be great at arithmetic, most of us can remember enough of it to realize that ISIS is only a few years old, Hillary Clinton is 68, and when Donald Trump snarls, “No wonder you’ve been fighting ISIS your entire adult life,” it sounds like the most dumbfuck failed political burn in a generation.

And if that’s not enough, there’s still the colossal mismatch of pitting the least knowledgable, least experienced and least disciplined candidate in history against a woman who is in almost every respect his polar opposite.

The only hope for Trump is that, between now and the next debate, he can develop the focus and dedication to learn the policy, talking points and composure needed to win it. All it will take is his suddenly adopting the seriousness and rigor that he’s never displayed at any moment of his campaign or, really, any point in his public life.

Or he could just skip the rest of the debates.

Editor’s note: Two sentences from this article were removed after it was brought to our attention that they resembled a joke from last night’s The Late Show With Stephen Colbert.

Hillary Clinton slammed Donald Trump and his treatment toward women throughout his career during Monday night’s debate. Watch here.