Donald Trump Has Nothing Left to Say. He Could Still Win Anyway - Rolling Stone
×

FAYETTEVILLE, N.C. — An old man ranting into the night.

That’s how it looked out on the windswept patch of tarmac at the Fayetteville Regional Airport on Saturday night, the venue for President Trump’s latest rally. I had left the press pen behind the TV camera risers — you know, the spot Trump points to during the “fake news! Fake news!” portion of his stump speech — to stretch my legs and warm my bones. The temperatures at the airport had sunk into the 50s and I’d forgotten to bring a coat.

I kept my distance from the throngs of mostly maskless Trump supporters. Suddenly, my Tar Heel blue three-ply mask felt less like protection and more like a bull’s-eye. I drifted away from the rally’s main stage while the president complained about the media not covering his Nobel Prize nomination (“You love your president, and your president gets honored — because I’m being not honored, you are being honored”). I found a spot to myself in the empty space between the stage and the food trucks and merch tables, and when I looked back at the spectacle from that distance — the massive American flags hung from construction cranes, the lights and the bleachers full of supporters, the sound of Trump’s voice echoing into the night — what struck me was how small the whole thing felt; the staleness of it all.

Trump’s Saturday Night Rally Was a Super-Spreader of Stupidity

There is just over one month to the 2020 election. Trump and Joe Biden are mathematically tied here in North Carolina, a state that could play a decisive role in picking the next president and deciding the fate of American democracy. I went to Trump’s rally in Fayetteville to see with my own eyes what the president’s reelection bid looks and sounds like. The ground truth, as it were, of the Trump 2020 roving reelection revival show.

Trump is who he is: there is no second act, no reboot, no special register for these unprecedented and turbulent times. His rally in Fayetteville was like so many other Trump rallies I’ve attended in the last five and a half years, if you count his 2016 run. The slow descent of his plane onto the runway. (In 2015 and 2016, it was his Trump-branded jet; now it’s Air Force One.) The weirdly campy and fossilized-in-the-1980s choice of entrance music. (“Body, body wanna feel my body / Body, baby, such a thrill, my body.” Uhh…) The TelePrompter jokes and crowd chants and free associative speeches — it was like 2016 had never ended.

They say power reveals. Four years as the commander-in-chief has revealed to us that Donald Trump is, well, exactly who we thought he was. He doesn’t try to hide it. His speech on Saturday was a classic of the genre, the purest expression of id and ego. The transcript of his remarks runs some 37 pages and nearly 18,000 words. It’s practically a novella, albeit a novella that makes Finnegan’s Wake look like See Spot Run! 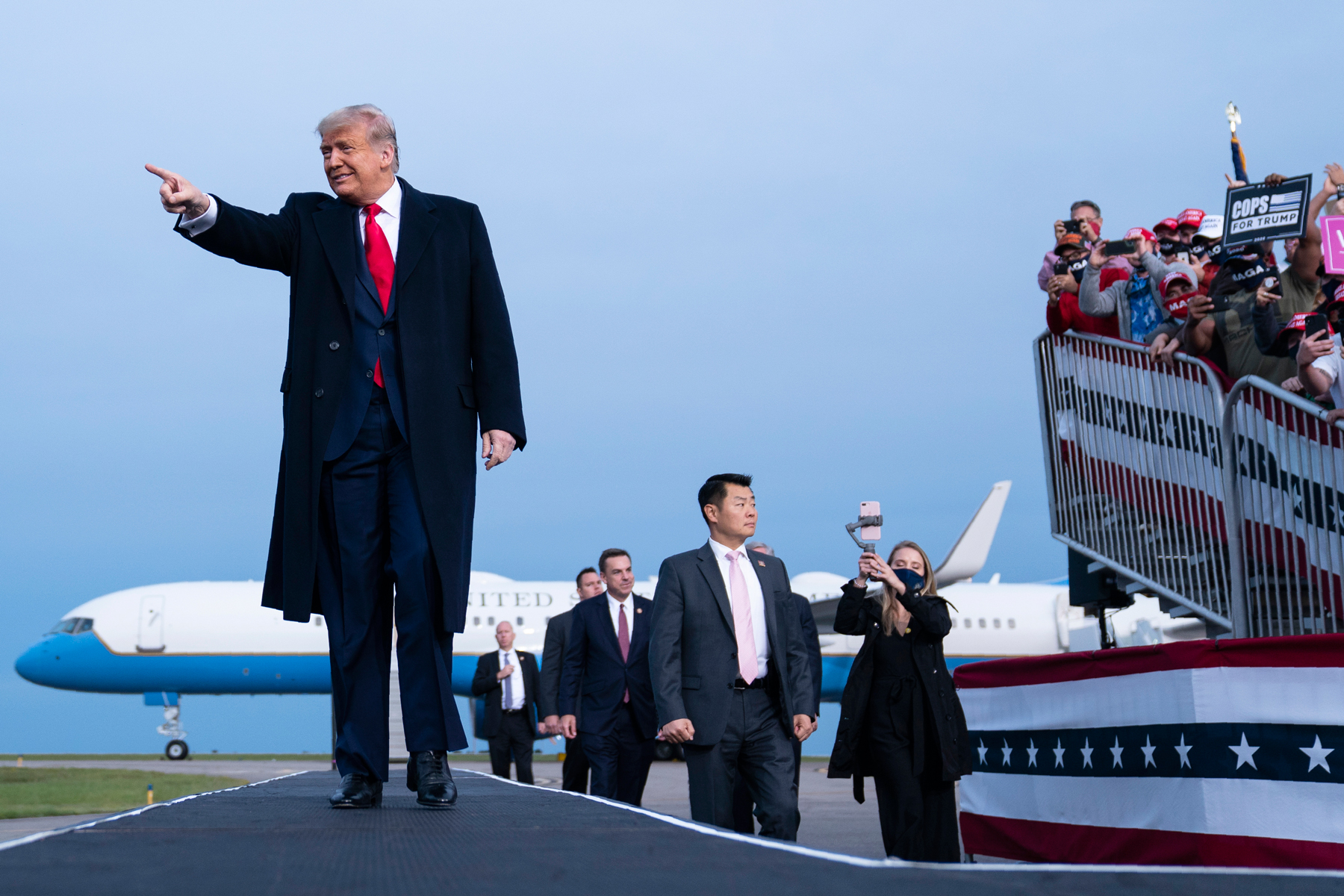 The poor White House pool reporter on duty Saturday night, Josh Dawsey of the Washington Post, did a valiant job of attempting to capture the stream-of-consciousness nature of Trump’s Fayetteville remarks:

Trump is wrapping up here in Fayetteville after a long rally, and your pool is being moved back to AF1.

Among the topics: His relationship with Japanese PM Shinzo Abe and NATO’s Stoltenberg, the journalist Bob Woodward, his Nobel Peace Prize nominations and them not being covered on TV, Lester Holt’s ratings, Hunter Biden and his foreign entanglements, forest management, Fox News hosts that he likes, the virtue of Mark Meadows, OANN, Biden’s tendency to stay in Delaware, Middle East wars, the embassy in Jerusalem and the type of stone that built it, Space Force, polls in South Carolina, Maine and other states, U.S. ventilator production, whether or not the fake news media accurately reports his mood when he wakes up in the morning, New York real estate, “leakers,” expensive aircraft carriers with electric catapults that are overpriced, elevators that are operated by magnets that don’t work, the price of Air Force One, Rush Limbaugh and his radio show and Medal of Honor and far more. “Maybe I’ll sign an executive order, you can’t have him as your president,” Trump joked of Biden. “People are going to vote for him because they feel sorry for him.”

Like any Trump rally, there was the occasional pinch of news, white supremacy, or mild autocracy sprinkled into the rambling monologue. The night before, in Bemidji, Minnesota, it happened when Trump offered what appeared to be an off-the-cuff shout-out for eugenics. In Fayetteville, it came when he said of Election Night 2020: “Now we’re counting on the federal court system to make it so that we can actually have an evening where we know who wins. Not where the votes are going to be counted a week later or two weeks later.”

Still, what matters to the president is clearly not what he says but the venue he has to say it in. “It’s a Saturday night. We have all night,” he said at one point, and as the rally slogged on, I had a vision of the president of the United States speaking for hours and hours, past midnight, into the next day, never stopping. “I could tell you so much it’s crazy,” he told the crowd almost two hours into the speech, by which point people had already begun to head for the exits.

What do they get out of this, the president’s supporters? Why suffer the long security lines, the crappy weather, and now Covid-19? (Though judging by the paucity of masks in the crowd, I gathered the virus wasn’t much of a concern.) Why spend your Saturday night in a parking lot for planes listening to Trump when you could be sitting at home watching?

As I walked around the site of the rally before Trump arrived, chatting with people (masked and from a distance) and taking in the scene, I realized that these rallies are as much a meet-up for members of the tribe as they are overtly political events. Here, everyone knows your name and they’re always glad you came … and oh, hey, is that Kayleigh McEnany? Let’s go get a selfie.

Standing in line for one of the food trucks, I listened to two Trump supporters commiserate and swap stories about defending the president to various members of their families. “He comes at me talking about collusion or Russia, and each time I just hit ’em with facts,” one (unmasked) man said about a Trump-loathing relative. “He never has an answer. Never.”

The other guy in line (partially masked) said he and his wife disagreed about Trump despite his best efforts to win her over to the MAGA cause. “This is what I tell people: Trump is like a kid with a hammer who swings at anything that looks like a nail,” he explained. “Sometimes he hits the nail. Sometimes he doesn’t. But at least he’s out there swinging.” 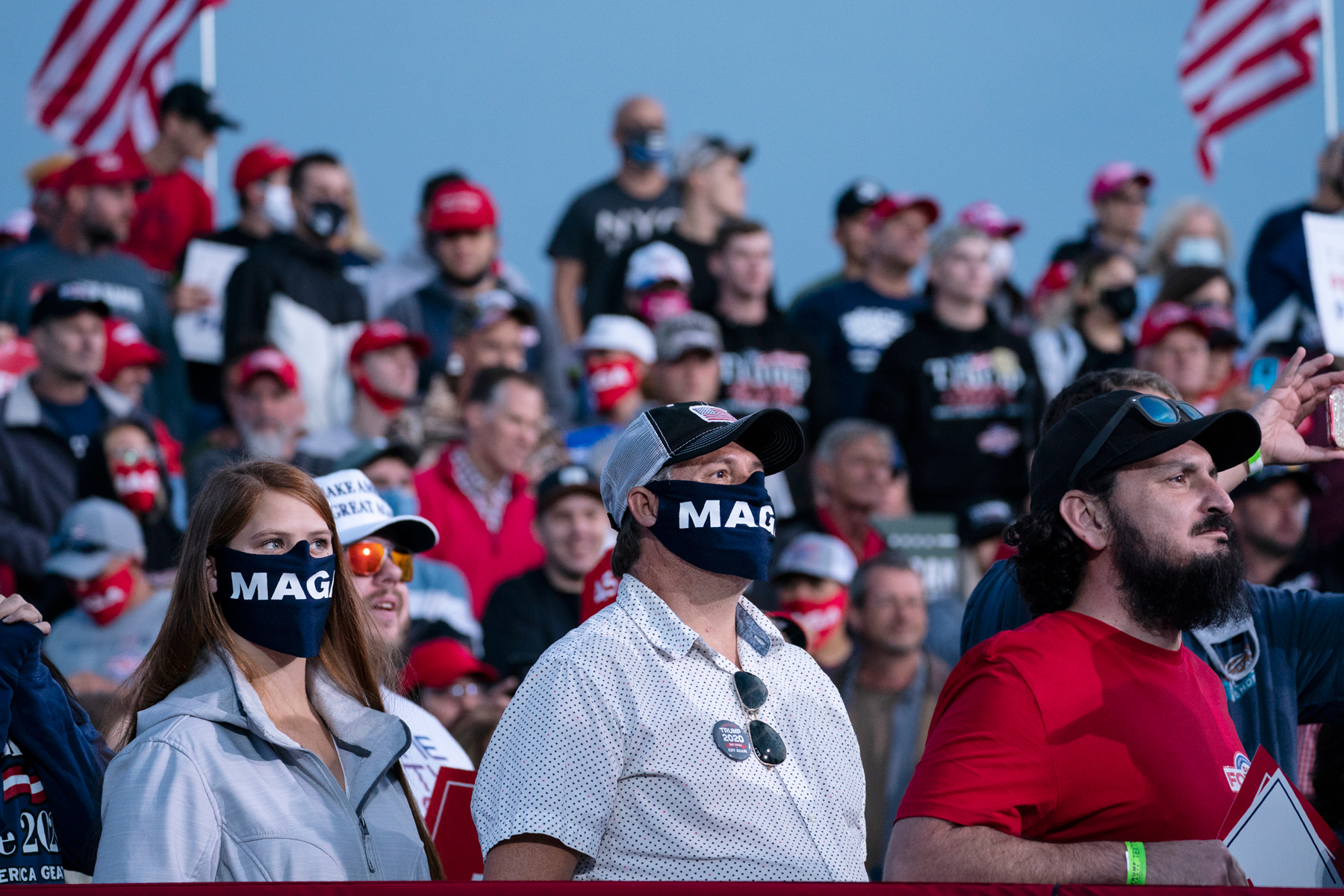 Trump supporters look on as he speaks during a campaign rally at Fayetteville Regional Airport, Saturday, Sept. 19, 2020, in Fayetteville, N.C.

Liberal Twitter loves to point out the various ways in which Trump regards his supporters with contempt. He held massive arena rallies attended by tens of thousands even after he knew the virus was “deadly stuff” transmitted through the air. He sold himself in 2016 as the last, best hope for the working class — the forgotten Everyman — and then once elected signed into law corporate tax cuts while falsely promising to the people of Lordstown, Ohio, that he would save their General Motors plant and the well-paying union jobs that went with it. Even Trump’s oft-repeated line that “I could stand in the middle of Fifth Avenue and shoot somebody and I wouldn’t lose voters” can be read as either an indictment of the integrity or intelligence of his supporters.

But Trump’s supporters, some of them at least, also see him for who he is. A child with a hammer, as the man in line at the Fayetteville rally said. Or as an older gentleman I met last year in Burlington, North Carolina, put it, “All these politicians are crooks. They go into office and they fill their pockets with money and they turn into crooks.” Trump was a crook too, but he was a crook before he got into office, and so, in a perverse way, he was incorruptible. “He’d already made all his money,” the man told me. “He wasn’t going to stuff his pockets with money.”

Democrats don’t stand a chance persuading someone like that to come over to their side. The question I’m left with is this: What happens to these people when Trump, in four months or four-plus years, departs the political scene? Where do the Saturday-night faithful go next?

I’ve seen enough of Donald Trump to know he has never wanted to build a movement even though the conditions are ripe; he wants fans, ratings, crowds, chants, adulation. What might happen if someone comes along and builds that movement?