October 7th, 2016 was the day that Hillary Clinton appeared to win the presidential election. She was ahead in the polls in every contested state, with twice the field offices as Donald Trump and twice the cash on hand. She had been blanketing the airwaves with ads and was on her way to being endorsed by 95 percent of all newspaper editorial boards. And then, at 4:05 P.M. EST,  the Access Hollywood tape dropped.

“When you’re a star, they let you do it,” Trump was heard saying on a hot mic in the previously unseen 2005 video. “You can do anything.” He repeated himself. “Grab ’em by the pussy. You can do anything.” The words weren’t just callous and misogynistic — they also intimated sexual assault. Republican Party elders went from uneasily supporting Trump to disassociating from him. Some, like then-RNC Chairman Reince Priebus and the late Sen. John McCain, even pressured him to withdraw. Journalists set to work writing his political obituary. Surely, no candidate would survive such a scandal.

Two years have passed, and Trump is president because the events of October 7th, 2016 marked a revolution. This was the moment that the old gatekeepers were swept aside, their indignation and appeals to “decency” kicked to the curb with them. Instead, the 2016 election would be decided by competing viral events, what we call “LikeWars.” This was the moment that the Internet swallowed politics for good.

Beyond the Access Hollywood tape, two other events transpired online that day. The first was official acknowledgement by the U.S. intelligence community that Russia had targeted the 2016 election by hacking the emails of the Democratic National Committee and Clinton proxies — a story of momentous importance that would be immediately lost in the “locker room talk” news cycle. The second, coming just minutes after the Washington Post published its article with the Access Hollywood video embedded, was the fruits of the the aforementioned hack. This was the initial release of the “Podesta Emails,” laundered through the “transparency” organization Wikileaks. The document dump would be repeated dozens of times, amounting to more than 20,000 pages of stolen communications.

This was the ammunition that Trump depended on to mount his comeback.

Jennifer Lopez Is an Assassin Protecting Her Daughter in New Trailer

But he needed an online army to help him. Trump’s could be found in the subreddit r/the_donald, a hyper-aggressive community of sincere supporters and professional trolls who treated the candidate’s every utterance like a commandment from the divine (“God-Emperor,” they called him). The subreddit gave Trump’s Internet shock troops a place to hone their messages and coordinate (unofficially) with Trump campaign proxies. By October 7th, 2016, r/the_donald would number 223,000 strong; a stark contrast with r/hillaryclinton’s 30,000 subscribers. Like many right-wing Internet havens, it had also been infiltrated by Russian operatives. (In 2018, nearly 1,000 accounts would be banned by Reddit after being found to be Russian sock puppets operated by the infamous Internet Research Agency.)

On the night of October 7th, the soldiers of r/the_donald were beset by the same tension that swept political observers across the country. For hours, the subreddit’s notoriously tight-fisted moderators deleted all mention of the Access Hollywood tape. Then came Trump’s midnight half-apology video. Seconds later, r/the_donald erupted with new resolve. It was time to fight — to overwhelm the “MSM” (mainstream media) with a level of sound and fury they couldn’t match. “I don’t think anyone is prepared for the scorched earth that’s about to happen,” user ‘PlasticGio’ wrote, capturing the mood.

What followed was an online information campaign that essentially conquered the Internet. The Access Hollywood tape dominated headlines for roughly a week; “Wikileaks,” on the other hand, was an unrelenting drumbeat of rumors and wild allegations that left conservatives in a perpetual state of fury. It didn’t matter that most of the stories were fake (Podesta did not drink bodily fluids in secret cult dinners, nor was Pizzagate real). What mattered was that these conspiracies continued to pick up steam through election day.

Trump’s savvy digital army helped ensure that Wikileaks stayed in the news while Access Hollywood gradually fell out of it. Most of these supporters had grown up on the Internet. They understood how to hijack conversations and — crucially — how to amplify their voices until no others could be heard. They helped manage a horde of 200,000 pro-Trump Twitter bots (roughly a quarter of which were built by Russians), ensuring that their messages trended and reached beyond Trump supporters to a wider audience. A single pro-Trump software developer, “MicroChip,” described to BuzzFeed’s Joseph Bernstein how he popped Adderall as he pounded through 12-hour shifts. With his bot machine firing on all cylinders, he could elicit 30,000 retweets in a single day.

On Twitter, the bane and obsession of the U.S. political class, the effect was to mask any decline in Trump’s popularity while driving Clinton’s numbers steadily lower. A comprehensive study of the sentiment of 300 million Trump- and Clinton-related tweets across the 2016 campaign found that the majority of Clinton’s were negative — a trend that accelerated in the final three months of the election. By contrast, Trump’s trend was almost unrelentingly positive. To examine the sum total of Trump-related Twitter conversation (real and fake) in the weeks following October 7th, the Access Hollywood tape appears but a small dip in an otherwise  steady upward climb.

A review of Google Trends data in the final month of the 2016 election shows that “Wikileaks” remained a near-obsessive search term. Interest crested repeatedly with the release of each new tranche of the hacked Podesta emails, driving media coverage accordingly. By contrast, interest in terms related to the hot mic tape — “Access Hollywood,” “Trump Tape” and even “Grab” — spiked on October 7th before all but disappearing after just five days. Search interest in Trump himself held steady at roughly twice that of Clinton.

Yet the pivotal battlefield was Facebook. In a graph of October 2016 Facebook conversations, since scrubbed from Facebook’s website but reproduced below, “Wikileaks” utterly dominated the platform. Discussion of the hacked emails — and wild, salacious stories they inspired — was bigger than chatter about The Walking Dead or Saturday Night Live. It was even bigger than the Chicago Cubs’ historic Game 7 World Series victory. The only topic more discussed on Facebook was Halloween, mostly in relation to kids and costumes. 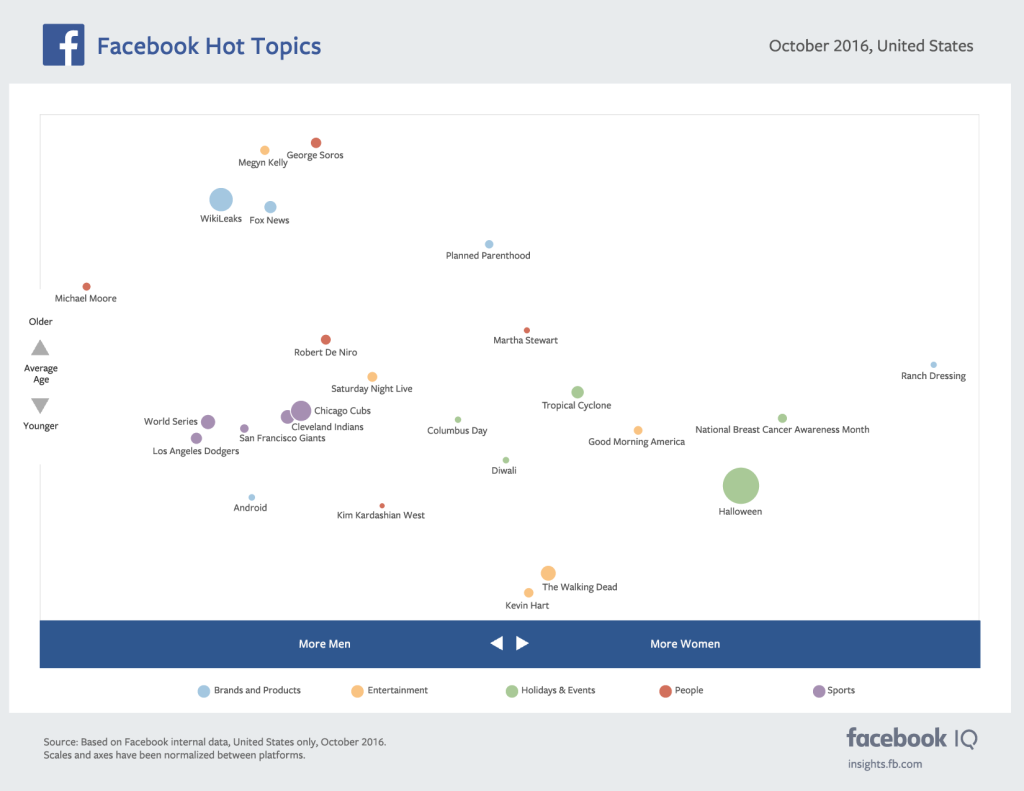 In their determined mania, Trump’s digital army set a tempo that Clinton and traditional media gatekeepers couldn’t hope to match. The intent was to daze, confuse, and dismay; to bury one outrage with hundreds of invented ones. And it worked.

On election night, the mood in r/the_donald was ebullient. Trump’s veterans mockingly quoted from the Access Hollywood tape. They’d grabbed “victory by the pussy,” as user ‘bilayo’ bragged. They’d defeated a campaign-ending scandal by leaning in and hitting back harder.

The legacy of October 7th echoes through American politics still. It showed that no single event — not blatant misogyny then, not decades of documented tax fraud now — can long dominate the news cycle. What matters now is keeping the beast fed, steering the course of online attention through a steady supply of ammunition to be spun by tireless Internet brigades. This is the way campaigns will operate for the foreseeable future, be they to win an election or fill the Supreme Court. Trump has not forgotten this lesson. It is still unclear if Democrats have learned it.

Emerson T. Brooking and P.W. Singer are the authors of LikeWar: The Weaponization of Social Media.