A stunning new CNN poll came out this week, showing Donald Trump in the lead against Hillary Clinton, 45-43 percent. Naturally, the release of this new survey coincided with my own Rolling Stone feature describing Trump in a “freefall,” having “lost his mojo.”

What can I say? Sometimes in journalism, you can’t help looking like a buffoon.

Let’s look at that poll, for if there’s any truth to it (and there has been some other evidence a “tightening” in the race), it would mean the ultimate worst-case scenario.

On the surface, Trump and new “campaign CEO” Steve Bannon appear to be employing one of the dumbest campaign strategies presidential politics has ever seen.

How Donald Trump Lost His Mojo

The recent rebrand is a transparent effort to rehabilitate Trump’s image as a racist loon. Bannon’s play has been to wheel Trump out at campaign events shackled, Hannibal Lecter-style, to teleprompters. At each stop, the candidate tries to focus just long enough to read out a robotic script offering “minority outreach,” while also signaling a “softening” and a “pivot” on his chief issue, immigration.

In person, watching Lecter-Trump labor to push this “minority outreach” script up a hill for 45 minutes or so is embarrassing to the point of being physically uncomfortable.

His “What do you have to lose?” appeals to African-American voters recall the cringe-inducing “My heart is as black as yours” routine of infamous New York Democrat Mario Procaccino, whose 1969 mayoral run has been described as the most incompetent campaign in American history.

It seems impossible that Trump’s Dr. King act would convince an educated person of anything. Just try to picture the mind that would be persuaded by these speeches. It’s not an easy image to conjure.

But in perhaps the ultimate demonstration of Murphy’s Law, it seems to have worked. The Bannon-Trump strategy at least looks this week like a success, even if it was just in the area of scoring one headline in one perhaps-flawed poll.

It’s developments like this that explain why the most successful third-party candidate in polls this season – and the only one who attracts wide support among liberals, conservatives and independents – is a giant meteor hitting the earth. (The “Sweet Meteor O’Death” scored 13 percent support, including an impressive 27 percent of independents, in a July poll).

After all, if Trump-Bannon’s nitwit strategy can succeed, that’s a powerful argument in favor of the species needing a reboot.

Or maybe the problem is confined to those of us here in America.

Just look at the math. The total popular vote in 2012 was 129,237,642 people. Assuming a similar turnout, in a theoretical world where Donald Trump scores 45 percent of the vote, that would mean a hair over 58 million human beings casting a vote for a man who thinks vaccines need to be administered one at a time, because “tiny children are not horses.” 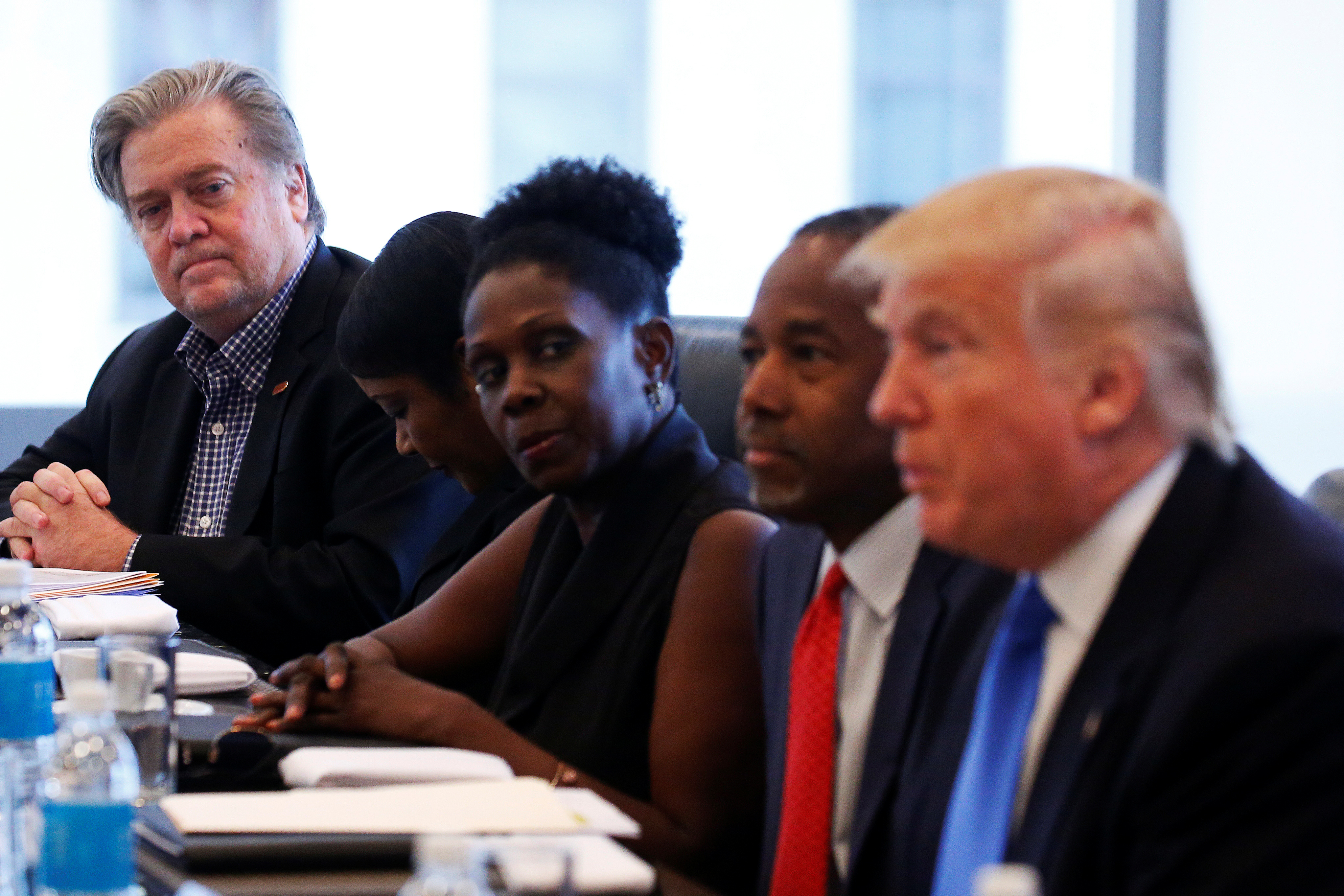 Unlike George W. Bush, a pliable ignoramus surrounded by cunning government lifers who were the real candidates for the job, Trump is surrounded by determined conspiracy theorists incapable of speaking English or completing a coherent thought.

His spokesperson Katrina Pierson said Barack Obama’s policies “probably” caused the death of a soldier killed in Iraq – in 2004! When confronted about her mistake, she said, “That’s why I used, ‘probably.'”

These are the sort of people whose first move upon entering the Oval Office would probably be to order the file on Area 51, or to check the back of the Declaration of Independence for treasure maps. And yet, somewhere north of 55 million voters, and huge majorities of white people, seem prepared to cast votes for this crew.

But such eventualities can’t be counted out. Trump has enjoyed an extraordinary run of sinister luck since the beginning of this race. The seas have parted for him over and over again in a pattern so improbable, it makes one guess at the existence of a Supreme Being with a serious grudge against the United States.

I bet on Trump to win the Republican nomination last summer, but it didn’t seem like easy money then. Trump’s path to victory in the nomination seemed to depend upon the unfolding of something like a conspiracy of incompetence by his primary opponents.

The likely victory scenario required some combination of John Kasich, Ben Carson, Jeb Bush, Chris Christie, Marco Rubio and Ted Cruz staying in the race too long, preventing Trump from having to win a one-on-one race.

That did happen, thanks in part to a series of unhappy accidents. Marco Rubio’s New Hampshire implosion, for instance, may have opened the door for already-conceding John Kasich’s surprise second-place showing in the same state. This kept both candidates in through Super Tuesday, allowing Trump to waltz to victory needing only a plurality of voters.

Trump’s Republican opponents proved perfect foils for his suicide-bomber political style. One by one, they each walked into the trap of engaging him in exchanges of schoolyard insults, causing senators and governors to quickly lose their respectable titles in favor of new monikers like “low-energy Jeb” and “Little Marco” and “Lyin’ Ted.”

Trump’s opponents all looked offended and thrown off-script by his attacks, while Trump came across as the same bleating, thin-skinned nut whether anyone engaged him or not. His opponents never figured out that Trump is incapable of losing such contests of insults, since he lacks the self-awareness to feel it when verbal punches land.

The physical proximity afforded by the endless debates was another factor. When you have to share a stage with a candidate determined to turn every event into a circus, it’s pretty hard to play the “I’m above the fray” card. He devoured camera time even in moderated debates, enhancing the impression that he was the dominant personality.

But all of these advantages were supposed to evaporate in general-election season. Instead of needing a plurality of Republicans, he now needed a plurality (and perhaps a majority) of all voters. Moreover his opposition was no longer a field of 16 nincompoops, but a single historically skilled political infighter who happened also to be one of the most famous and admired women on earth.

Unlike Ted Cruz or Marco Rubio, Hillary Clinton was not going to get into a “mine’s bigger than yours” bro-brawl with Trump on live TV. She was sure to do the smart thing: let Trump hang himself with his own stupidity for as long as possible, and then ultimately turn the election into a referendum on dull competence versus cattle cars, race war and global isolation – an easy choice, the political version of Eddie Izzard’s “cake or death” joke.

This is exactly how it seemed to play out. After the conventions, Trump plunged into new scandals and controversies on a nearly minute-to-minute basis, from a loony battle with the family of a dead war vet to a claim that Obama “founded ISIS” to a bizarre remark about what daughter Ivanka should do if sexually harassed in the workplace by a Roger Ailes type (“find a new career“).

Then, in the face of plummeting poll numbers and mocking headlines, he panicked and emerged from a campaign reorganization tethered to an insane plan to walk all of this damage back by singing homilies to African-American despair in front of all-white crowds.

It should have been fatal. It wasn’t. Whether the CNN poll taken at the end of this incredible sequence of events that shows him in the lead is accurate or not, is irrelevant. The fact that it’s even close is an awesome indictment of us all.

It’s also a testament to Trump’s uncanny inability to fail even when he seems to be trying his hardest to do so. Not even the most exaggerated view of Hillary Clinton’s deficiencies as a candidate explains it. It feels a lot more like Idiocracy coming powerfully to life at exactly the wrong moment.

I still don’t think Trump really has a chance, but we’re sure headed toward a scary ending.

From ‘Citizen Kane’ to ‘Idiocracy,’ here are the movies that predicted the political rise of presidential candidate Donald Trump. Watch here.