Donald Trump promised in January that his Obamacare replacement would create “insurance for everybody.” On the campaign trail, Trump claimed that “Republicans who want to cut Medicaid … are wrong” and promised there would be “no cuts.”

But Trumpcare – the House legislation the president has claimed as “our wonderful new Healthcare Bill” – will kick tens of millions of Americans off the insurance rolls and slash Medicaid by nearly $900 billion. That’s the verdict of the Congressional Budget Office, the nonpartisan scorekeeper charged with forecasting the impact of new legislation.

Trumpcare not only covers fewer people, but will also drive up premiums – at least in the short term. According to the CBO, Trumpcare will drive a spike in insurance costs of 15 to 20 percent for those who remain in the individual market.

If your diagnosis of Obamacare was that premiums were not high enough and too many people had insurance, Trumpcare has the prescription for you.

The blows of Trumpcare hit hard and hit early. By 2018 alone, “14 million more people would be uninsured,” compared to continuing Obamacare, according to the CBO report. By 2020, Trumpcare would reverse all the progress the country has made in expanding insurance under Obamacare – stripping 21 million of coverage. But Trumpcare isn’t done. By 2026, the damage swells to 24 million. That’s like kicking every man, woman and child in the state of Texas off America’s insurance rolls.

The full number of America’s uninsured – adding in the 28 million expected to remain uncovered even with Obamacare – would soar to 52 million.

Most of the damage of Trumpcare comes from the gutting of Medicaid. That safety-net program for poor and low-income Americans gets cut by nearly 25 percent – $880 billion over the first decade – as Trumpcare unwinds the gains of Medicaid expansion under Obamacare. The CBO projects 14 million Medicaid patients would lose their coverage, many of them children, the disabled and the elderly.

Trumpcare’s impact on the individual market has gotten a lot of attention. But the second-biggest losers under this bill, in raw numbers, are Americans who get insurance through their employers. Trumpcare eliminates the “employer mandate” that requires big companies to offer insurance to employees. Combined with other changes, this would lead employers kick seven million Americans out of work-based health care, the CBO found.

With 21 million Americans losing access to Medicaid and employer coverage, you might expect that the private insurance market would swell, as these Americans seek market alternatives. But under Trumpcare, enrollment in the private marketplace also shrinks, by two million. 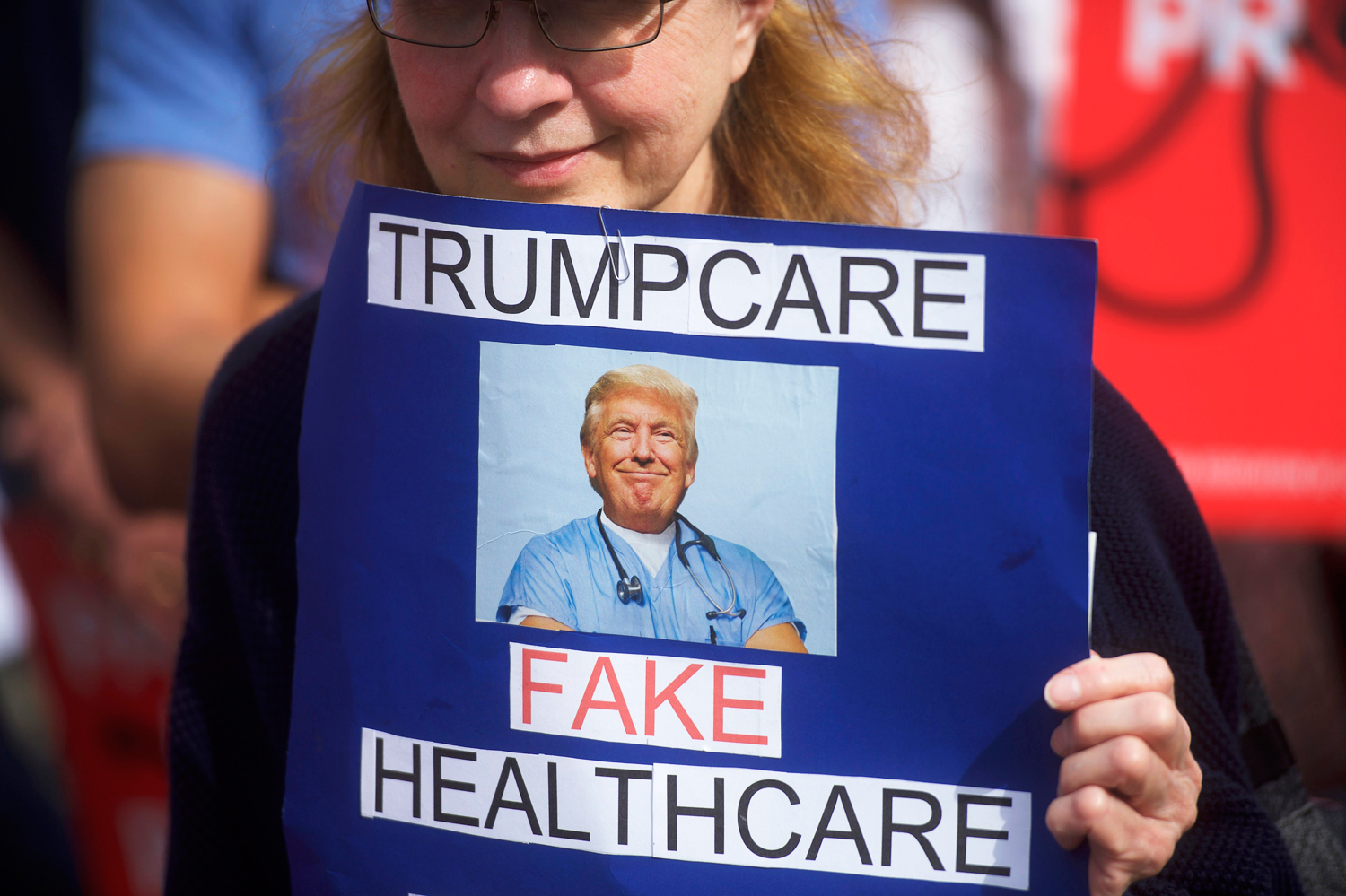 Under Trumpcare, insurance becomes unaffordable for many. CBO lays out the case of a 64-year-old with an annual income of $26,500 in the year 2026. Under Obamacare, the government would pay the vast majority of that person’s $15,300 premium, leaving the lower-income near-retiree on the hook for just $1,700 in insurance costs, for a policy that covers 87 percent of care.

Under Trumpcare, this 64-year-old gets hit three ways. First, Trumpcare allows insurers to charge this person five times what it charges a young person. (Obamacare limits this ratio to 3-to-1.) Second – and this is the big whammy – the Trumpcare insurance tax credit is capped. The government covers only $4,900 in premiums. That leaves the individual on the hook for $14,600 in policy payments. Third, the insurance is worse: The CBO report predicts the policy will only cover 65 percent of the cost of care.

This is plainly unworkable. Just paying the premiums would leave this wage-earner with less than $1,000 a month to pay for life’s other necessities, and unable to afford co-pays should he or she get sick.

These numbers are shocking. The over-under for the CBO score had been marked by the think tank Brookings, which suggested 15 million could lose insurance.

Trump’s Health and Human Services secretary, Tom Price, was quick to blast the CBO numbers as “just not believable.” But the CBO numbers are not outliers, according to Politico, which reports that a model developed by the White House itself shows that even more Americans would lose insurance – 26 million total, with 17 million from Medicaid alone.

Who wins in this scenario? The net $670 billion in tax cuts from this bill would benefit wealthy investors, drug companies, health insurance executives and tanning salons, among others.

Such numbers make a liar out of President Trump, who vowed as recently as January that he’d deliver “better health care for more people at a lesser cost.” The CBO report also debunks the claims of Speaker Paul Ryan who has insisted the House GOP plan would improve health care “access.” Ryan argued this week that people who lose health coverage because they were freed from an IRS mandate shouldn’t count against the Republican plan. But the CBO makes clear that Trumpcare creates new barriers to coverage, and that significant numbers of Americans will “forgo insurance in response to higher premiums.”

Ryan’s reaction? In short: This is fine.

“If you read this entire report,” Ryan told Fox News, “I’m pretty encouraged by it.

“It actually exceeded my expectations.”