The History of White Supremacy in America - Rolling Stone
×

The angry men marching in Charlottesville, Virginia, this past weekend seemed alien to many Americans. They shouted “Blood and Soil,” imitating the Nazi slogan “Blut and Boden” – meaning that the blood must be racially pure, and the land must belong to the racially pure. For these new American Nazis, the enemies are the black and brown people supposedly destroying their pure white United States. The marchers chanted, “Jews will not replace us,” echoing Hitler’s paranoid fear of Jews as the ultimate enemy.

Although they may seem a bizarre throwback to brown-shirted, goose-stepping stormtroopers of 1930s Germany, these men – and they were nearly all men – have roots that go deep in American history and America’s present. They are also some of Trump’s biggest fans. David Duke, a former leader of the Ku Klux Klan, said the marchers were there to “fulfill the promises of Donald Trump” to “take our country back.” Others in Charlottesville found Trump too moderate. Vice News filmed one rally speaker named Christopher Cantwell arguing he’d prefer a president who’s “a lot more racist than Donald Trump,” someone who would not “give his daughter to a Jew.”

This is the new face of white supremacy in the United States. It goes beyond the systemic racism minorities in America have long faced and continue to face. White supremacists dream of a world in which minorities are either subservient or nonexistent. Below is a brief history of some of how today’s white supremacist movement came to be.

The nation’s founding and mainstream white supremacy
Article I of the Constitution says slaves are three-fifths of a person, and Article IV requires states to return runaway slaves. The United States was founded on white supremacy.

The Civil War ended legal white supremacy, but it continued to be enforced by Southern leaders and white militant groups, most famously the KKK. Black people were kept under control by extralegal violence, including lynchings.

With the reimposition of white supremacy in the South, the original Klan faded away. In the early 20th century, however, it was reborn as a Protestant nativist movement. The new KKK was anti-black but also targeted Catholics and Jews, part of a long anti-immigrant tradition in America. The second Klan was a fad that attracted millions of supporters and then rapidly faded away in the 1930s. 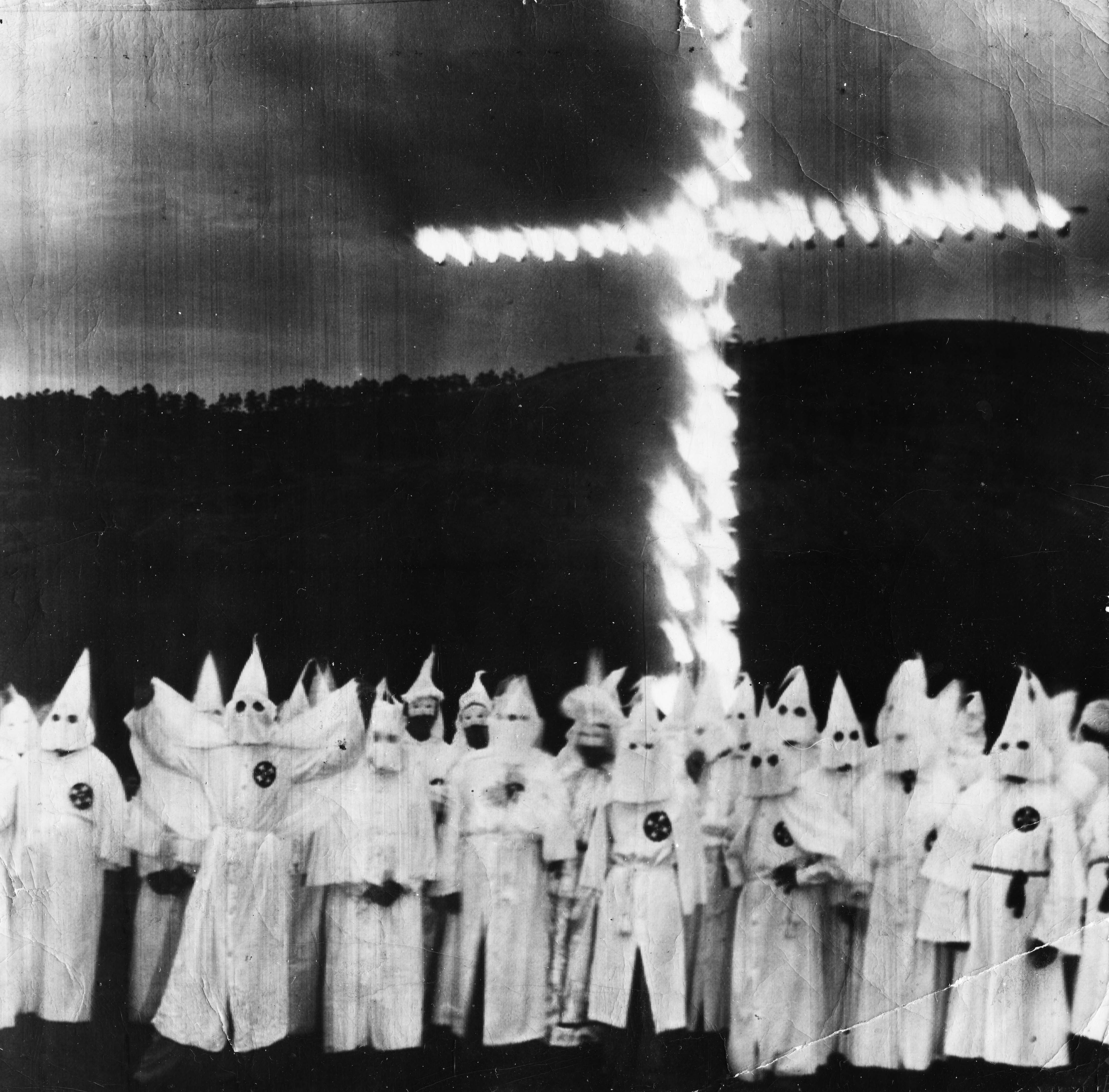 White supremacy goes underground
The legal defeat of segregation did not, however, end white dreams of supremacy. Instead, angry white supremacists, no longer part of the mainstream, splintered into numerous underground racist organizations. Many of these groups borrowed ideas from the Nazis, creating a new kind of white opposition. These movements also spread out from the South, reaching every part of the United States.

An inspirational guru for this new white opposition was Wesley Swift, a former Methodist. Swift founded a church in the 1940s that preached a gospel of white superiority. He called his twisted version of Christianity “The Church of Jesus Christ, Christian,” and preached that only white Europeans were blessed by God. He was particularly hostile to the Jews, borrowing from Nazi anti-Semitism.

One fan of Swift’s was William Potter Gale, a World War II veteran, who was outraged at the federal government’s interventions on behalf of the Civil Rights Movement. Gale formed his own “United States Christian Posse Association,” later known as “Posse Comitatus” (Latin for “force of the county”). Gale argued that the federal government had overstepped its legal bounds. It had no right to use troops to protect black students during integration efforts, no right to collect income taxes and no right to run a Federal Reserve. Essentially, he said, the U.S. government was an illegitimate entity and its orders and officials could be opposed, with violence if necessary. The people had the right to form their own armed posses to oppose the federal government. This view became accepted among far-right groups and helps to explain their repeated clashes with federal and state authorities.

“You’re damn right I’m teaching violence! You better start making dossiers, names, addresses, phone numbers, car license numbers, on every damn Jew rabbi in this land … and you better start doing it now. And know where he is. If you have to be told any more than that, you’re too damn dumb to bother with.”

In the 1970s and ’80s, Posse Comitatus established chapters across the country, especially in places where an economic slump had led to farm foreclosures and desperate farmers.

Richard Girnt Butler was an associate of both Swift and Gale. On Swift’s death, he took over his church and moved it to Idaho. There, he created a new organization, the Aryan Nations. Butler was even more anti-Semitic than Gale. He preached that the United States was being controlled by Jews and that it was the duty of all white Christians to fight against this oppressive force. Butler held annual meetings for Aryan Nations members and like-minded groups. Hundreds of racists would show up at the Aryan Nations compound for these conventions to discuss tactics and feed each other’s hatreds.

Fear of the Jewish threat
A group with a similar mindset was the National Alliance, founded in 1974 by William Pierce, a former physics teacher. Pierce had been an associate of George Rockwell, the leader of the American Nazi Party, before Rockwell was assassinated in 1967, and shared Rockwell’s anti-Semitism and his belief in the superiority of an American Aryan (white) nation. Under Pierce’s leadership, the National Alliance gained an active membership of more than 1,000 people and became one of the nation’s most successful far-right organizations. 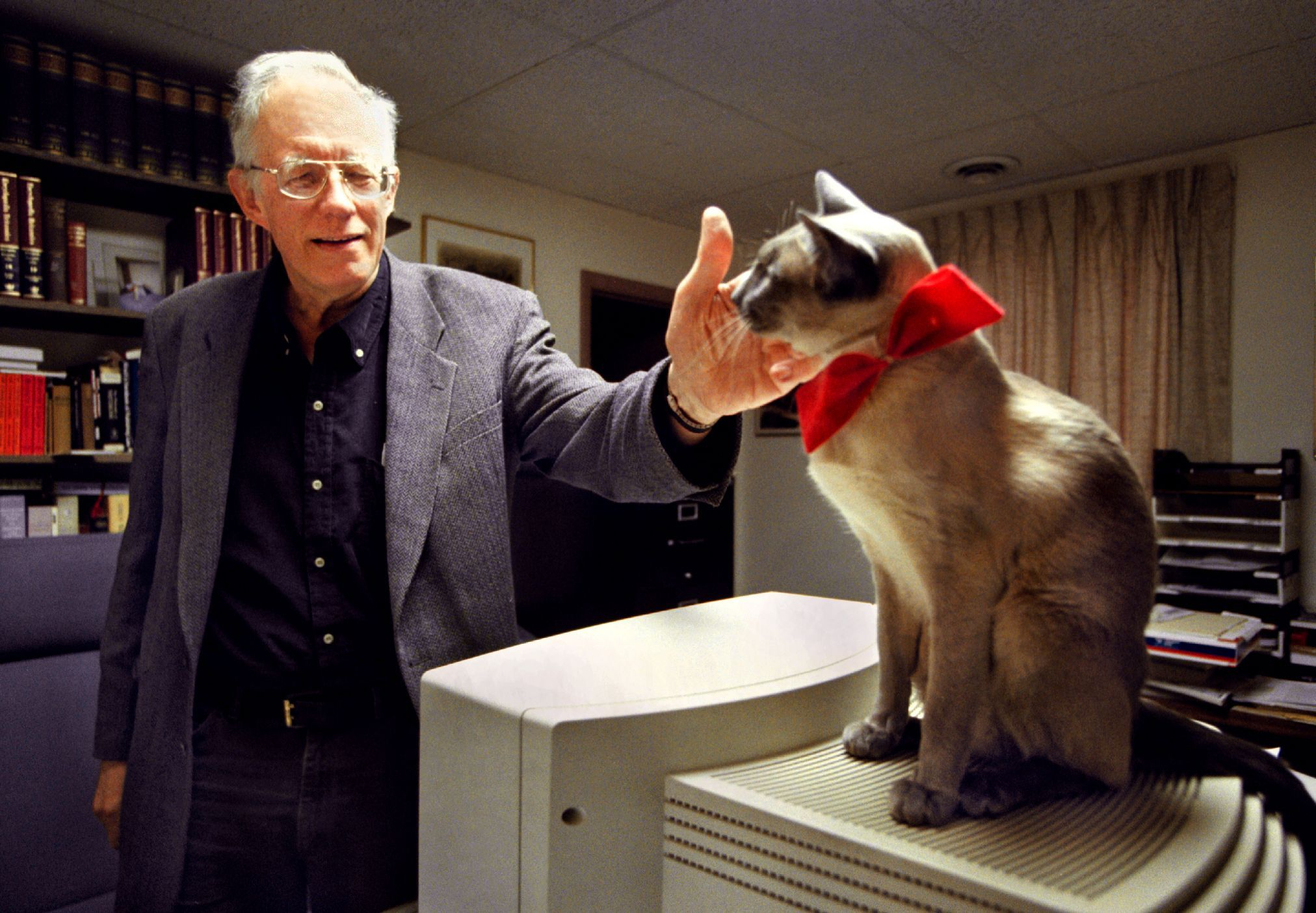 In 1978, Pierce, writing under the pen name Andrew Macdonald, put out The Turner Diaries, a badly written racist novel that imagined the violent overthrow of the U.S. government by white militants. The United States, as depicted by Pierce, was controlled by a Jewish elite, who used blacks as their tools. In the book, the evil federal government orders all guns confiscated. White patriots fight back in an uprising that begins with the bombing of the FBI headquarters in Washington – a scene would become the model for Timothy McVeigh’s bombing of the Oklahoma City Federal Building in 1995.

The themes in Pierce’s book crop up again and again in far-right groups then and now. They shared a fear of a United States government bent on total control of society – a government controlled by Jews. They coined a nickname for the federal government: the Zionist Occupational Government, or ZOG. They also shared Pierce’s fear that the government would take away their guns. This was also a fear spread by the more mainstream National Rifle Association – a group that had been a relatively boring advocate for hunters’ rights for most of its history until it became radicalized after an internal shakeup in 1977.

Linked by their paranoia about government power, the far-right fringe shared a hostility towards all non-whites. They often expressed admiration for the ideas of Adolf Hitler, the hero of racists everywhere. They wanted to protect the power and the purity of the white race. They saw themselves as under attack by waves of “mud people” (Mexicans, Asians, blacks). The Jews were behind it all.

Violence defines the far right
Along with preaching white supremacist ideas, the far right has been incredibly violent. One of the perversities of American history is that there has been more fear of the left (the Black Panthers, the Weather Underground) than the far more violent right (the Order, the Aryan Brotherhood, the Militia movement). From the assassination of radio host Alan Berg to the Oklahoma City bombing, which killed 168 innocents, the right is more willing to use violence, and more murderous when they do so. Recent right-wing mass murder episodes include Wade Michael Page’s 2012 attack on a Sikh temple in Wisconsin, which killed six; Frazier Glen Miller’s 2014 targeting of Jewish community center in Kansas, which killed three; and Jared and Amanda Miller’s 2014 murder spree in Las Vegas, which killed five (including themselves).

And then there’s Dylann Roof’s 2015 murder of nine black parishioners at the Emanuel African Methodist Episcopal Church in Charleston, South Carolina. Roof was an avowed white supremacist who posted pictures of himself posing with Confederate flags and guns and burning an American flag. Reportedly his last words to his victims were, “I have to do it. You rape our women and you’re taking over our country. And you have to go.” 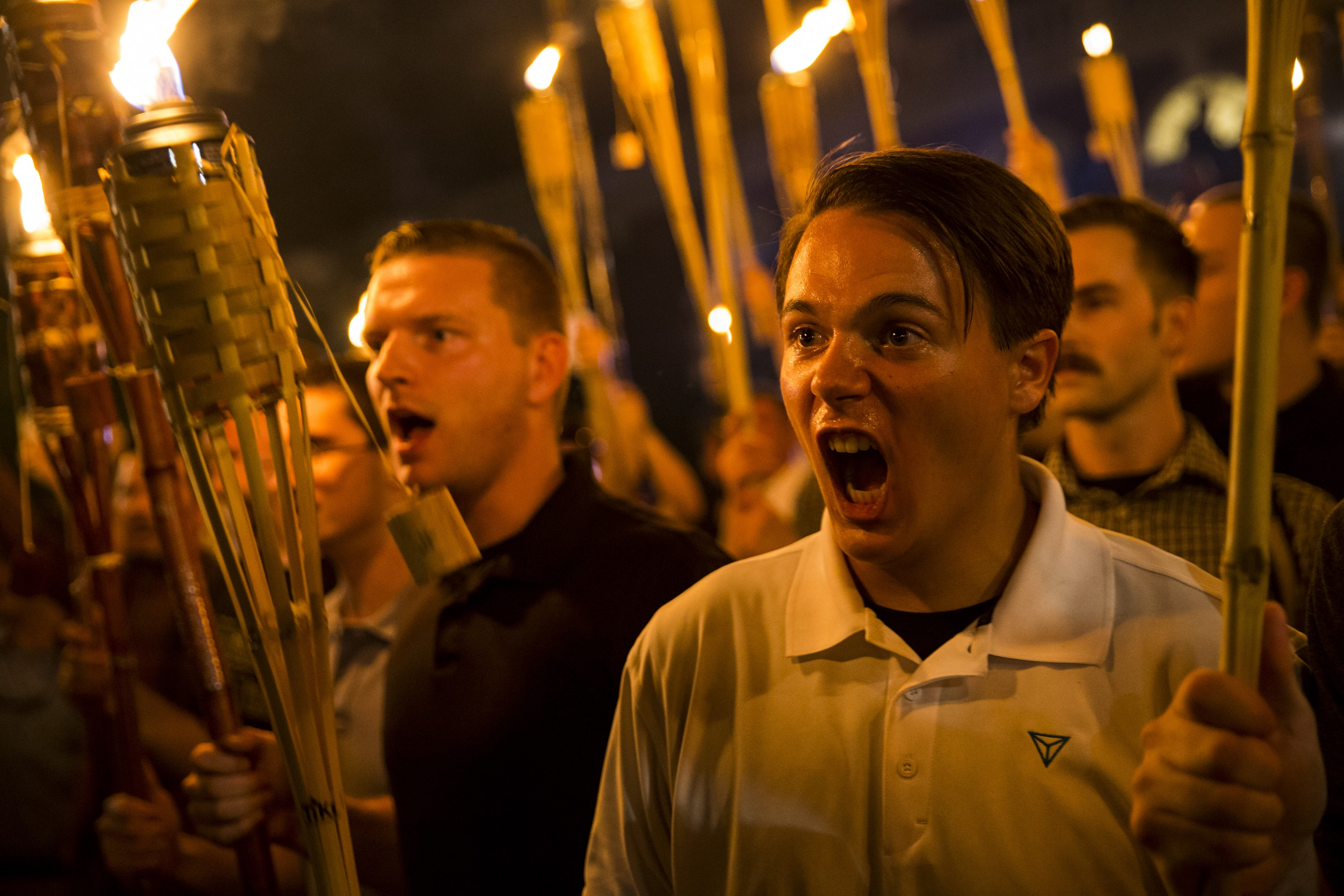 White supremacy today
Today’s white supremacists are splintered into dozens of groups with similar ideologies. There is a lot of crossover between these groups, with people moving back and forth between them. There are the neo-Nazis, who use websites like Stormfront and the Daily Stormer to coordinate their activities. Then there are the slightly more mainstream white nationalists who call for the creation of an ethnically pure white state (an “ethno-state”) and the neo-Confederates who do the same but with an added dash of pre-Civil War nostalgia. The Klan still exists, of course, with splinter factions around the country.

Then there’s the modern alt-right, a term coined by white nationalist Richard Spencer. They tend to be younger and snarkier than those in the older movements. They are particularly offended by what they see as excessive political correctness. They share contempt for mainstream liberals, feminists, “social justice warriors” and immigrants. There is no one alt-right organization, but they tend to gather on platforms like 4chan or the The_Donald (a pro-Trump subreddit). Some of the alt-right came out of the misogynistic Gamergate mess, while others got their start with the Red Pill, a subreddit devoted to pure misogyny. (The “Red Pill” refers to the scene in The Matrix when Keanu Reeves takes the red pill and discovers what the world is really about.) Some take on cute names like the Proud Boys (created by Gavin McInnes, a hipster co-founder of Vice Media) and the Fraternal Order of Alt-Knights.

Even more mainstream is Breitbart, the right-wing political site. Steven Bannon, when he ran Breitbart, proudly claimed it was the platform of the alt-right, and right-wing gadfly Milo Yiannopoulos once wrote a long, gushing profile of the alt-right in the publication. Bannon, who was until Friday President Trump’s chief strategy adviser, has claimed to reject the ethno-nationalism of the alt-right, and instead calls himself an economic nationalist. He’s also, however, a fan of a rabidly racist 1973 book called The Camp of the Saints, which portrays a white world overwhelmed by a horde of brown and black people.

There is a sad mix of paranoia and inferiority in all these supposedly superior white people. They claim they are the real victims in America – they are the ones who face real racism. Stormfront’s website cries out, “We are the voice of the new, embattled White minority!” They portray themselves as warriors, but when they are attacked, they are shocked, hurt, afraid. After Richard Spencer was punched while doing a TV interview on Trump’s Inauguration Day, he complained to CNN, “It was absolutely terrible. I’ve certainly never had this happen before, a sucker punch in broad daylight.”

Jason Kessler, the petty criminal and wanna-be nationalist leader who helped to organize the Unite the Right rally in Charlottesville, gave a press conference Sunday, the day after Heather Heyer was killed, to complain about how the right was being mistreated. “It really is a sad day in our constitutional democracy when we are not able to have civil liberties like the First Amendment,” he said. “That’s what leads to rational discussion, and ideas breaking down, and people resorting to violence.” Then he fled, as a heckler ran up to punch him.