Taibbi: The End of Facts in the Trump Era - Rolling Stone

The order floated down from the lunatic’s castle late on a Friday. No more visas of any kind from seven countries, Donald Trump decreed, and mayhem replaced a weekend.

Thunderstruck customs officials scrambled to make sense of the surprise order; planes landed and innocent travelers were detained; the Internet exploded; protesters stormed airports everywhere; the acting attorney general refused to go along and was fired like a contestant on one of Trump’s shows; it was Keystone Kops meets Pinochet.

And then there were the lies. If there is one thing the first few weeks of the Trump administration have proved, it’s that keeping track of what we used to call “objective fact” is now a fool’s errand.

Did the visa ban affect green-card holders? On a case-by-case basis, the administration said. The following day, a senior official said the ban “doesn’t affect them.” Reporters then asked if that was different from what was said at first.

The answer, “No,” constituted a seemingly impossible third response to a simple question. The Trump administration is breaking new metaphysical ground in the mechanics of untruth.

Extreme Vetting, But Not for Banks

Trump went on to blame the media for falsely reporting that the plan was a “Muslim ban,” when a ban on Muslims was one of his most explicit campaign promises. He misled about it being “similar” to Barack Obama’s 2011 policy regarding Iraqi visas (it wasn’t close). He lied about everything with regard to the visa story, except for one thing: its popularity.

“A majority of Americans agree with the president,” chirped Sean Spicer, already a challenger to former Disney tour guide and Nixon flack Ron Ziegler for the title of most loathed White House spokesman ever.

Because this was the Trump administration, most sensible people assumed Spicer’s line was a lie. But it wasn’t. Despite near-unanimous condemnation by the international community and massive demonstrations, polls showed that more Americans than not supported whatever it was Trump was doing with the borders.

This gets to the heart of a chilling truth that much of educated America has yet to face about the Trump era. Amid all the howling about Trump’s deceptions, the far more upsetting story is the mandate behind them – not so much the death of truth in politics, but the irrelevance of it. Donald Trump is proving that if you connect with America’s anger and paranoia, you can get by quite easily without facts.

Clearly, we’re in the midst of a mass-hysteria movement that approaches the McCarthy era, with the caveat that our version is utterly ridiculous in addition to being terrifying. Take the fable of the “3 to 5 million illegal voters” investigation, another of Trump’s early provocations. (Incidentally, there have already been enough baffling episodes in this administration to fill several history books; like a bad hallucinogenic experience, it feels like years have passed already, when it’s only been days.) Trump called for a “major investigation” into an apparent incidence of mass voter fraud by undocumented immigrants. This story began just after the election as a report peddled by Trump’s favorite conspiracy theorist and aneurysm-in-waiting, Alex Jones of Infowars. But after the inauguration, Trump explained to congressional leaders that he’d gotten additional proof from “the very famous golfer Bernhard Langer.” 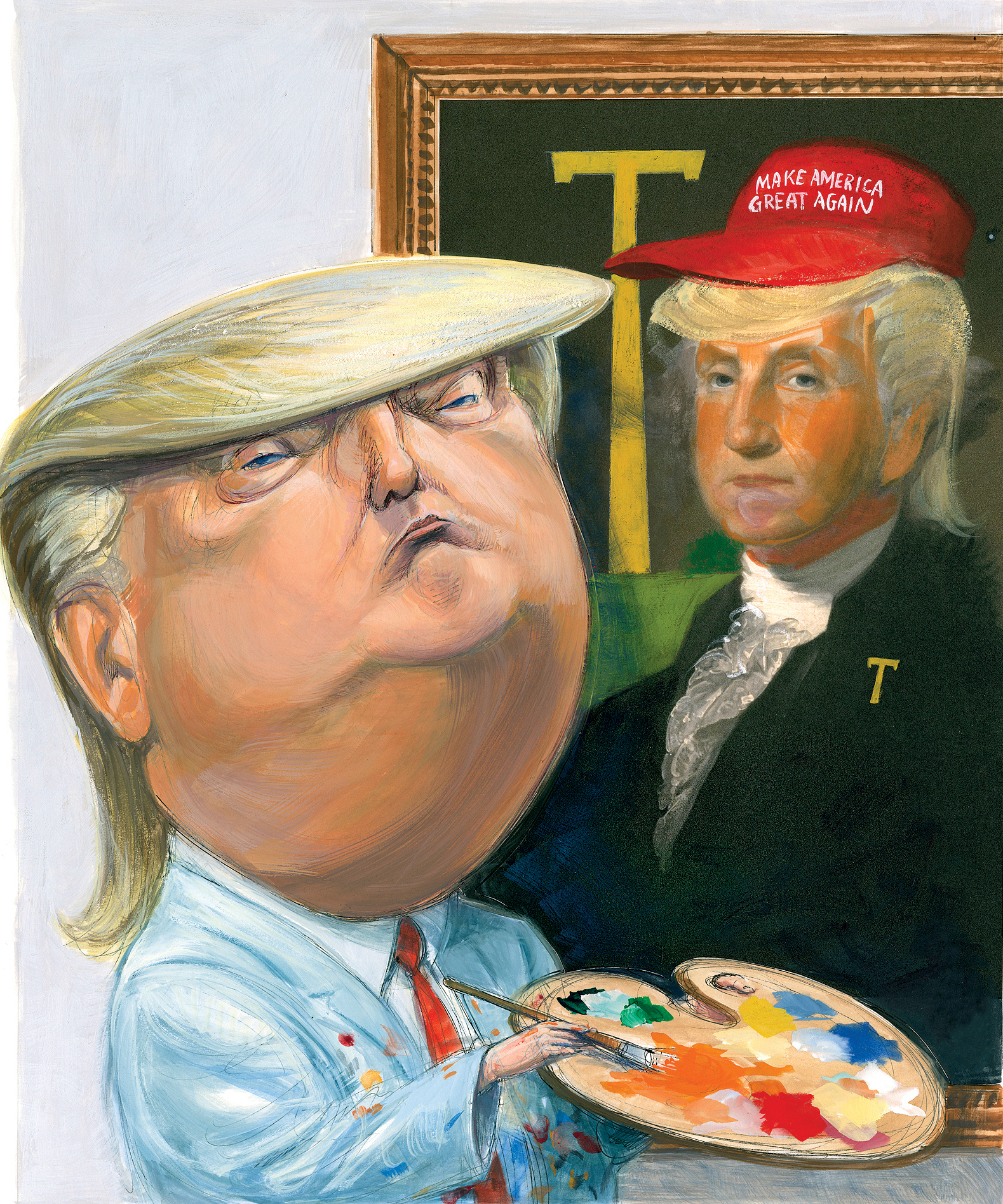 Trump, according to a New York Times report, said that Langer had told him that while he, Langer, had been turned away from the polls, two people who “did not look as if they should be able to vote” had been waved through. Trump then speculated to Congress that the two individuals might have come from Latin American countries.

In any case, Trump never spoke to Langer, the actual ineligible voter in the story, and Langer in turn never saw the two suspicious people, who in turn were almost certainly legal voters, if they even existed to begin with. All of this insanity ended up being relayed with a straight face to real members of Congress, who probably all soiled themselves at the thought that Washington was finally being run by someone who thinks just like their voters.

Trump Week One saw a string of such gruesome stories, from an order greenlighting the construction of the Great Wall of Trump, to the open embrace of the word “torture,” a low to which even Stalin never sank. Trump even ordered his Department of Homeland Security to begin compiling a list of crimes committed by immigrants, which, as many noted, is a trick culled directly from the Nazi Institute for Research on the Jewish Question, which kept lists of crimes committed by Jews.

If you’re rolling your eyes at the increasing number of Godwin’s Law offenses in the Trump story, that’s fine, but consider this: If Trump isn’t stealing ideas from the Nazis, and it’s just a coincidence that he shares so many of their policy instincts, that’s not much of a comfort either.

But for all of the lunacies of Trump’s first week, the war on facts might have been the one that shook liberal America the most.

The anti-truth campaign started with Spicer, a career GOP stooge who 18 months ago was denouncing Donald Trump for insulting John McCain. The ginger-faced Rhode Islander spent the first day of the Trump administration swimming in the world’s most ill-fitting suit – the fabric looked hacked from an airport couch with garden shears – as he insisted that Trump’s anemic inauguration crowd had been the biggest ever. It was such a whopper that even the Trump administration had to cop to it, sort of.

Commentators wondered aloud if Conway’s “Alternative Facts” routine had marked the beginning of a new Orwellian dystopia. Fears in this direction even rocked the publishing industry, where 1984 hit number one on Amazon, triggering a new printing practically overnight.

Facts are the closest thing we have to a national religion. In America, where sex-tapers become royalty and monster trucks massively outdraw Shakespeare, even advertisers aren’t supposed to just lie. The truth is the last thing here that isn’t openly for sale. This is why so many people responded to Conway not as if she’d said something stupid – we’re used to that from our politicians – but more as though she’d said something irreligious. 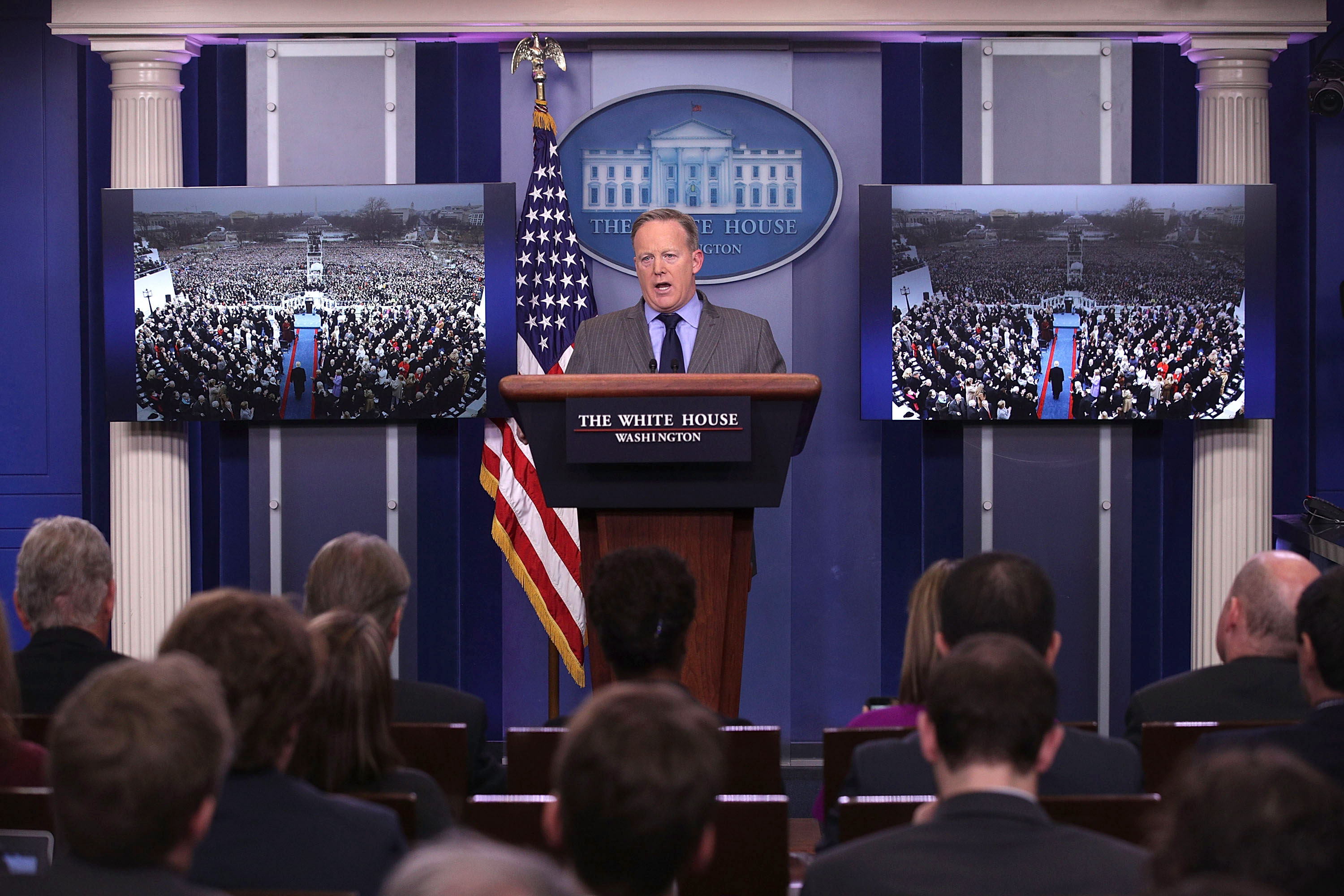 The Washington Post reported with alarm on this crumbling of the Church of the Fact. As a test, they showed a group of Americans aerial photos of the Trump and Obama inaugurations. An astounding 15 percent of Trump supporters identified the clearly emptier Trump inaugural photo as the one containing a bigger crowd. We’re now such a divided people that we literally see the world differently.

A primary characteristic of any authoritarian situation, from East Germany to high school, is the total uselessness of facts and evidence as a defense against anything. Trump is in the White House because he and his people understood this from the start. His movement isn’t about facts. All that matters to his followers is that blame stays fixed in the right direction.

While Trump’s new staff spent the first few weeks tearing apart presidential tradition like a troop of apes let loose in the Louvre, progressives spent their energy pushing news outlets like The New York Times and CNN to begin using words like “lie” in headlines, as if this were somehow going to be a game-changer.

When the Times finally began doing just that in its coverage of President Trump (“Trump Repeats Lie About Popular Vote in Meeting With Lawmakers” was the paper’s proud January 23rd formulation), a parade of self-congratulation ensued.

The Times covered its own decision like it was news. Other outlets, from CNN to The Nation, began running their own headlines containing what was unironically described as the “l-bomb.”

There’s nothing wrong with calling Trump and his minions liars. They are liars. But no Trump voter is going to pick up the Times and suddenly be struck now by the deceptiveness of Donald Trump. What the Trump voter will perceive instead is a whining bunch of “snowflakes.” And he’ll think Trump’s neck-bloated chief strategist, Steve Bannon, is right on when he calls the media the “opposition party.”

Apart from the monumental scale of the error – we put O.J. in the White House this time, instead of just letting him loose on golf courses for a few more years – that was exactly the same story of myopic intellectuals clinging to facts and rules, while scoundrels steamrolled their way to victory riding narrative and celebrity.

Like O.J.’s lawyers, Trump doesn’t stand and fight but continually moves the battle to a different arena, one where facts mean nothing and anger means everything. O.J.’s prosecutors never understood that they’d been swallowed up by a bigger game. Can we afford to make the same mistake now?