Ten years ago, George W. Bush signed into law the Troubled Asset Relief Program, better known as the TARP bailout. The rescue forked over $700 billion of taxpayer money to bail out giant Wall Street banks that were already too big, and were about to get bigger.

On Wednesday, Sen. Bernie Sanders (D-VT) and Rep. Brad Sherman (D-CA) introduced new legislation on TARP’s anniversary. It is aimed at the central, still-unaddressed issue of the last disaster: the ungovernable size of the country’s biggest banks.

Dubbed the “Too Big to Fail, Too Big to Exist” act, the Sanders-Sherman bill revolves around a simple concept: If a bank controls assets that collectively represent more than 3 percent of the country’s GDP, or about $584 billion, it has to shrink or be broken up.

“We bailed these banks out ten years ago because they were ‘Too Big To Fail,’” Sanders tells Rolling Stone by phone. “Now it turns out that our four largest financial institutions — J.P. Morgan Chase, Bank of America, Wells Fargo and Citigroup — are on average 80 percent bigger than they were before we bailed them out. That’s not right.”

RS Recommends: The Smart Laser Robot Vacuum We've Tested Is on Sale for $299

From (Heated) Pillows to Probiotics, We Tested 10 New Ways to Boost Your Mood Naturally

Banks have long been a focus for Sanders, who is hoping to use new tactics to take on old foes. He has been experimenting with the use of public pressure and journalism-like tactics — including the launch of a series of video testimonials about workplace conditions at companies like Disney and Amazon — to try to augment legislative efforts at reform.

Recent successes on that front have Sanders in a good mood. Just a month after being blasted by Amazon for “misleading accusations” and triggering a national controversy that saw much of the pundit class, along with Democrat-aligned think tanks, take Amazon’s side in the labor debate, he watched as the retailer this week appeared to capitulate, announcing a $15 minimum wage across U.S. operations.

“Look, at the end of the day, you rally public opinion, you force people to have to do the right thing,” says Sanders, who has spoken openly in the past about his frustration with the slow pace of change on the Hill.

It’s hard to understate just how much bank concentration has eaten at Sanders over the years. Beginning decades ago, the administrations of both Republican and Democratic presidents embarked on a series of policies intentionally designed to consolidate financial power.

The first major move on this front was the Riegle-Neal Interstate Banking and Branching Efficiency Act of 1994. This law torpedoed restrictions on opening bank branches across state lines. These rules dated back to the McFadden Act of 1927, passed specifically with the idea of preventing financial concentration.

Signed into law by Bill Clinton, Riegle-Neal helped usher in the era of giant national banks. By 2016, Americans had 57 percent fewer FDIC-insured banks than they had in 1994. Sanders cast the only “no” vote against Riegle-Neal on the House Financial Services Committee.

The next major move was the Gramm-Leach-Bliley Act, better known as the repeal of the Glass-Steagall Act. A post-1929 safety measure passed in FDR’s day, Glass-Steagall prevented the mergers of insurance companies, investment banks and commercial banks.

The ostensible justification for the repeal of this historically successful reform was that such restraint was no longer necessary. Moreover, the creation of “supermarket” financial institutions was needed to keep America competitive with giant “universal” banks in Europe and Asia.

In reality, Gramm-Leach-Bliley was passed to retroactively legalize the Citigroup merger, which had brought Travelers Insurance, Salomon Smith Barney and Citibank under one roof. That deal had been struck before Glass-Steagall was even repealed in 1998.

In one of the all-time revolving door atrocities, then-Treasury Secretary Bob Rubin, who helped push through the deal, later took a job with Citigroup and earned over $100 million as a “senior adviser” over the course of about a decade.

This early effort at banking concentration had Sanders even back then thinking about possible bailouts. In an examination of then-Fed chief Alan Greenspan in 2000, Sanders asked why any regulator would approve placing so many assets under one roof.

Greenspan characteristically demurred. “We do not believe that in the event that it turns out that a substantial institution fails that they should be bailed out,” he said.

About the same time, future Treasury Secretary and then-CEO of Goldman Sachs Hank Paulson began lobbying for the relaxation of the so-called net capital rule, which ostensibly barred investment banks from borrowing more than 12 dollars for every one they actually had.

Within four years, the top five investment banks were meeting with the SEC to press for this change, and soon achieved it. Although the actual impact of the net capital rule change has been hotly debated, what’s not in question is the fact that by 2008, debt-to-equity ratios on Wall Street hovered around 33 to 1. 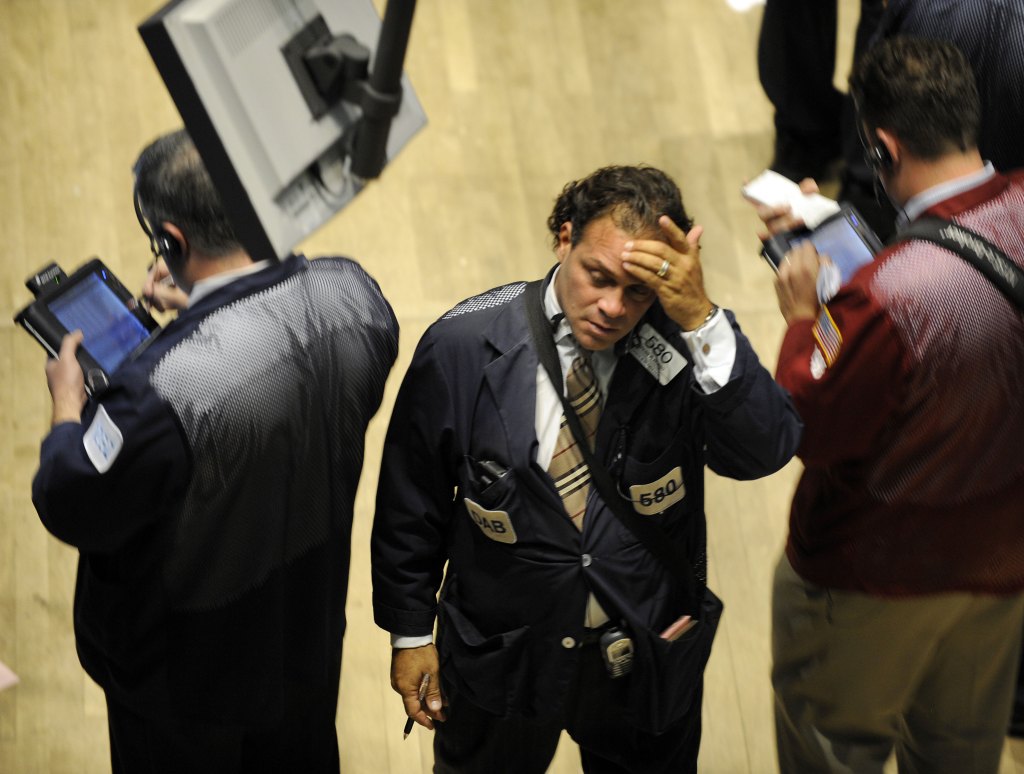 A trader on the floor of the New York Stock Exchange holds his head as he walks off the floor September 29th, 2008. Photo credit: Timothy A. Clary/AFP/Getty Images

Of the five investment banks that pressed for the changes in 2004, three of them (Bear Stearns, Merrill Lynch and Lehman Brothers) would be dead within four years.

When the big crash happened in September 2008, most of the economic world focused on crafting a rescue to “stabilize” the economy. Sanders, however, honed in on the fact that any state-aided mergers and rescues would likely continue the dangerous concentration trend. As far back as September 17th, 2008, in fact, he complained on the floor of the Senate that any rescue of Wall Street that didn’t include mandated breakups would leave the underlying problem unaddressed.

By that time, however, officials in the Federal Reserve and George W. Bush’s Treasury Department — including, notably, Paulson, who by then was Bush’s Treasury Secretary — had already moved in another direction.

They’d begun concocting a rescue plan, the chief characteristic of which was to double- or triple-down on the concentration narrative, using public funds to make dangerously large financial firms even bigger and more powerful.

This brand of rescue would continue in the next administration. Barack Obama’s chief bailout architect, Treasury Secretary Timothy Geithner, had also been involved in the Bush rescues as head of the New York Fed, and had been a protégé of Rubin in the Clinton Treasury.

When Bear Stearns teetered, Geithner and other officials used Fed funds to help stuff the mess into the balance sheet of JP Morgan Chase. Later, when Merrill Lynch failed, it was folded into Bank of America. Bailout recipient Wells Fargo was prodded to swallow the toxic disaster over at Wachovia. The FDIC seized another basket case, Washington Mutual, and crammed it into Chase for a bargain price, with the state eating much of the loss.

These shotgun weddings had the immediate impact of preventing further meltdowns, but everyone knew that the longterm impact would be to further concentrate economic and political power.

For some, this created a major safety issue, as this kind of concentration virtually assures that future bailouts will be necessary. Even former TARP administrator (and Goldman banker) Neel Kashkari estimated as recently as this summer that the likelihood of a future bailout was 67 percent, absent some kind of effort to address Too Big To Fail.

For Sanders, however, the extreme concentration of economic power is a problem even if there isn’t another collapse in the next 10 minutes.

“It’s a movement to an oligarchy in this country,” he says. “Are we comfortable as a nation with a situation in which six financial institutions have assets equivalent to 54 percent of the GDP? What kind of economic power is that, what kind of political power is that?”

When work began in the summer of 2009 on the Dodd-Frank financial reform act, which was to be the signature legislative response to the crisis, everyone with a brain on the Hill knew two things.

First, the by-far biggest problem that needed to be addressed was the Too Big To Fail issue. And second, any meaningful effort in that direction would be a complete political non-starter.

Not only did the banks still own so much of Congress that such a move could never pass, but the government had long ago stepped away from its mandate to break up dangerous concentrations of corporate power.

“We don’t do [antitrust] anymore as a nation,” Sanders says.

Still, there have been scattered efforts to address the issue of economic concentration. Sanders issued his first attempt at a bill to break up the banks in November 2009. Senators Sherrod Brown of Ohio and Ted Kaufman of Delaware also introduced an amendment to Dodd-Frank that mandated breakups of over-large companies based on simple, numerical caps. 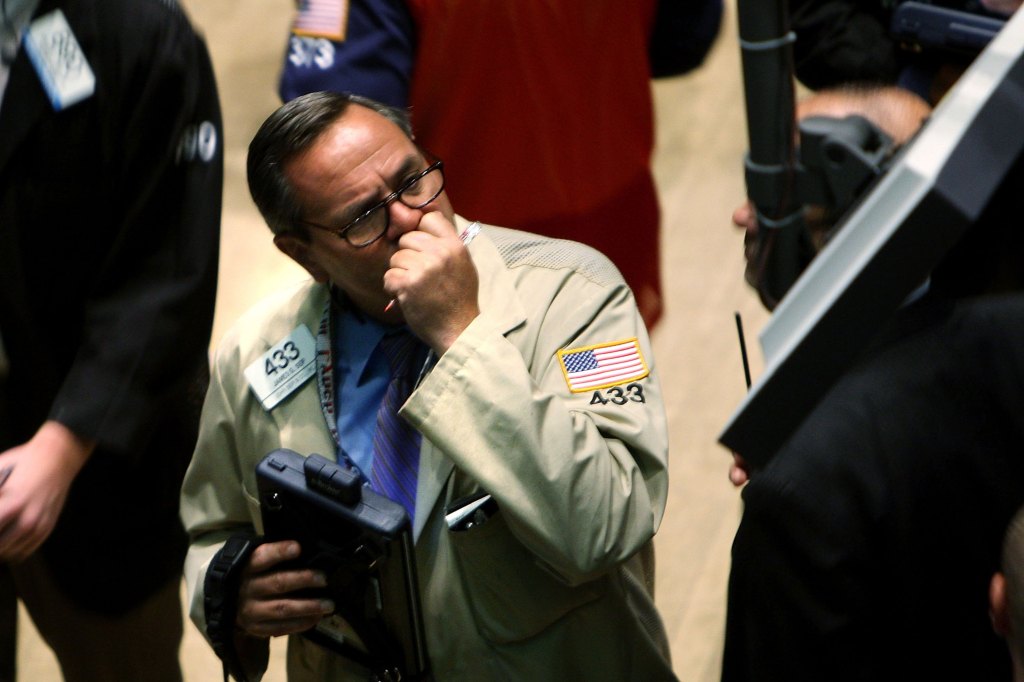 That bill was walloped in the Senate, 61-33, with 27 Democrats voting against it, often using some version of a “size doesn’t matter” argument. “Size is not the appropriate restriction,” is how Virginia Democrat Mark Warner put it.

Brown, Sanders and California’s Sherman over the years kept at it, introducing different proposals to target Too Big To Fail banks. A consistent problem with these efforts has been a lack of support within the Democratic Party, whose economic policies have been dominated by the same Rubin-Geithner-Lawrence Summers Wall Street-friendly ideology (what one financial analyst friend of mine deems the “Rubino crime family”) for two-and-a-half decades now. It will require massive voter repudiation of these ties on the Democrat side to even begin to take real action on these ideas.

Sanders has been consistently ripped by Democrats for his bank-breakup concepts. During the 2016 campaign, when the official position of the party and the Clinton campaign was that shadow banking had caused the crisis, Barney Frank went so far as to pen an editorial for the Washington Post saying “Too Big To Fail is an Empty Phrase.”

Pundits piled on. The Financial Times claimed Sanders had “struggled to articulate how” he would go about a breakup, and claimed Fed reports had described the banking system as safer since Dodd-Frank. Slate said it was “hard to take Bernie Sanders seriously” on this issue.

Today, however, Sanders feels like he has a new weapon in the effort to bring about change on matters the public cares about. Amazon represents an example of how his office feels it can bypass the logjam both on the Hill and in the press, and take issues directly to the public.

“We changed the office around to a television station, Sanders Broadcasting,” he says, laughing. “You know, we do our agitation and we rally people.”

Sanders wants to use these tools to make the concentration of financial power among certain companies a leading issue for Democrats heading into the 2020 election season. The new bill would affect the six richest banks in the country — JP Morgan Chase, Citigroup, Wells Fargo, Goldman Sachs, Bank of America and Morgan Stanley.

“We’re going to have to reeducate people,” Sanders says. “This is the ten-year anniversary of economic calamity that resulted in millions of peoples lives being radically altered for the worst. Losing jobs, losing their homes, losing their life’s savings. It was a cataclysmic impact on our entire society.”

He adds: “We think that breaking up any financial institutions [that have] assets of more than 3 percent of GDP — which is about 580 billion dollars — is the right thing to do. It’s what should have been done a long time ago.”

Looking back at the catastrophe of three decades of concentration, it’s hard to conclude that he’s wrong. At the very least, the public is likely to agree with him on this score. Let’s hope that this time around, the Democrats realize this in time for the presidential election.