Back in 2016 – after Justice Antonin Scalia died and Sen. Mitch McConnell successfully blocked hearings for his replacement – veteran Newsweek reporter David A. Kaplan set out to understand how the Supreme Court became so powerful and so polarized that control of a single seat could end up determining everything from the outcome of presidential elections to the outline of social policy for a generation.

In September, Crown Books will publish The Most Dangerous Branch, Kaplan’s ambitious tome full of stories behind the most consequential rulings and powerful political figures of our time, drawn from interviews with 165 people – sitting justices, retired justices, clerks, lower court judges and federal officials. Rolling Stone spoke with Kaplan about what Brett Kavanaugh’s appointment might mean for abortion, why Justice John Roberts saved Obamacare and the crazy idea that could restore the court to Democratic control sooner than you might think.

You report that Justice Samuel Alito, one of the most conservative voices, told a group of lawyers in 2017 that he welcomed Justice Neil Gorsuch’s appointment because the court produced “narrower opinions” and engaged in “more compromise” during the year it was ideologically balanced – four liberals and four conservatives – and Alito saw that as a negative.
Every now and then, somebody says something that really shows what they think. Alito, quite boldly, acknowledged that once “we” get a ninth justice who happens to be a fellow traveler – Gorsuch – we can stop compromising, we can stop issuing narrow decisions, we can go big. Think about that. That’s remarkable. That somehow being narrow, somehow pursuing compromise, would be a bad thing. I thought that was a perfect illustration of the problem.

Will swapping Justice Kennedy for Brett Kavanaugh mean even more of that – more sweeping opinions, less compromise?
I do think Brett Kavanaugh, if he’s confirmed – which I think is highly likely – will skew more to a John Roberts institutionalist view than to the views of [Justices] Alito, Gorsuch and [Clarence] Thomas. But I don’t think anybody’s gonna mistake him for Justice Kennedy, and certainly nobody’s going to confuse him with Justice Ginsburg.

You describe Justice Roberts as a centrist, in the sense that he values the “institution” of the Supreme Court over “politics.” Can you explain what you mean by that?
What Roberts did in the Obamacare ruling was out of an institutional allegiance to the court. He made clear, publicly and privately, what a lousy law he thought Obamacare was, both in terms of policy and in terms of how the nitwits in Congress drafted it. But I think Roberts, aware of the criticism he would receive among GOP stalwarts, thought the needs of the court were more important.

So you believe Justice Roberts ruled the way he did because he thought the court would lose credibility if it struck down the Affordable Care Act. What gives you the impression Kavanaugh thinks like that?
I’ve sat next to Kavanaugh at multiple judicial dinners in the last 10 years. I don’t profess to be an expert on him, but I think I have some sense of the fellow. I’ve read a lot of his opinions. I’m familiar with his background. I know people who know him. I don’t think he is likely to be the flame-throwing rabble rouser or revolutionary that Clarence Thomas prides himself on being. Thomas has extraordinary lack of respect for precedent. Alito veers in that direction, [as does] Gorsuch.

Kavanaugh – whether it’s a product of being a lifelong D.C. creature, whether the professors he was close to at Yale, whether you just try to read the tea leaves in a lot of rulings, the most important of which might be the Obamacare ruling – I think he is more of an institutionalist. He has a partisan agenda. He served Bush 43 in the White House. I don’t think a whole lot of liberal Democrats go to work for conservative Republican presidents. But I think his view of the role of Constitutional law, generally, and of the importance, structurally, of the Supreme Court, are such that he would veer more toward restraint and minimalism and caution than Thomas, Alito or Gorsuch. And in that way I think he is more like Roberts.

If Kavanaugh is confirmed, do you think the court will overturn Roe v. Wade?
I think Roberts is troubled by seeing the court get put in the maelstrom. And I think he recognizes that Roe v. Wade would put the court in the maelstrom like no other ruling in modern times, even more so than Obamacare being decided in a presidential election year. My guess would be that Roberts would not vote to explicitly overturn Roe, and my guess would be that Kavanaugh would not do so either. If Roe v. Wade squarely came before the court in six months or a year, my guess would be a 6-3 not to overturn it. But – and it’s a significant “but” – you can chip away at Roe without overturning it. The Supreme Court has already upheld 24-hour waiting provisions. And you could easily imagine Kavanaugh and Roberts upholding virtually any regulation, any restriction on abortion, short of an outright ban on abortion.

Trump promised to nominate justices who would overturn Roe – he’s not going to make good on that promise?
I think if overturning Roe was the coin of the realm in Trump’s White House – or more accurately, in Don McGahn’s White House counsel’s office – then Kavanaugh was the wrong pick. Virtually anybody in the judicial conservative arena in the last 20 years is critical of Roe. But I think it is a big gap for people like Kavanaugh between saying it was a lousy decision and taking the extraordinary step of overturning the ruling – all the more when the Supreme Court 25 years ago upheld it.

But I think Don McGahn and other sophisticated lawyers in this administration and the Federalist Society don’t particularly care about Roe. And, in some respects, [from their perspective] it’s nice to always have Roe out there because it keeps mobilizing the base and helping you win, like in 2016. But the issue they really care about – and for which it is legitimate, as a partisan matter, to fear a Roberts-Kavanaugh court – is the [issue of the] power of the federal government.

What do you mean by that?
The Supreme Court has ruled since the 1980s that federal agencies, like the FCC, OSHA, the EPA, should be given vast deference in applying very broadly written acts of Congress. That deference to administrative agencies based on rulings in the 1980s is called “Chevron Deference.” Gorsuch first got noticed by the lawyers in the Trump White House based on, among other things, a speech he gave blasting Chevron Deference. Reigning in “out of control”  federal agencies is what’s most important to the Trump White House and the Federalist Society.

There are clearly three or four votes on the Supreme Court now to possibly overturn Chevron. I think it’s a pretty good bet that Kavanaugh would vote to overturn Chevron. Now, the body politic doesn’t particularly care about this issue the way they care about Roe, but smart idealogues and partisans understand that, while abortion may be important to a lot of people, if you want to fundamentally alter how the federal government does business, overturning Chevron Deference is critical. You would reign in federal agencies in a way that conservatives dating to the Reagan administration have been clamoring for.

Let’s talk about Kavanaugh’s confirmation chances.
With the facts that we now have on Kavanaugh, I think he’ll be confirmed easily. My bet would be 55 votes, possibly 56 votes with Senator McCaskill of Missouri. But, we don’t know what facts are gonna come out between now and the hearings. It is possible that the external politics concerning this president could hold things up, but I would imagine that the Republican Senate, which controls the outcome, will want to get Brett Kavanaugh on the Supreme Court no matter what. And that would be a lasting victory.

However “moderate” the Chief Justice or Brett Kavanaugh might be in the middle, it’s still a conservative court. What remedy would Democrats have, other than hoping that Clarence Thomas decides to go on RV trips full time and retire? The only action Democrats could take is hope they win the White House in 2020, and take control of the House and Senate.

But even if they take back the House, the Senate and the White House in 2020, and Thomas retires, it would still be a 5-4 conservative court, right?
One could imagine – and you’ve heard some murmurings about it – they could attempt to put two more seats on the Supreme Court. That’s called “court packing.” FDR suggested it in 1937. It was universally criticized. It was quickly abandoned in part because the Supreme Court turned around – it went from voting down New Deal legislation to upholding New Deal legislation. Adding justices to the Supreme Court – say, make it 11 [rather than nine] – and have the next two named by a president who wins in 2020, would return the court to Democratic control. It is completely legal. You could say it violates norms, but is it any more violating than what Republicans did with [Obama nominee Merrick] Garland?

If the Democrats won control of the Senate this November, would they be able to hold together in blocking any other Trump nominee? Or Pence nominee? I have my doubts they’d be as good at obstruction as the Republicans were in 2016, but as much as I abhor the politicization of the court, it would be hard to criticize Democrats for doing so! It’s a logical extention of what McConnell did in 2016! 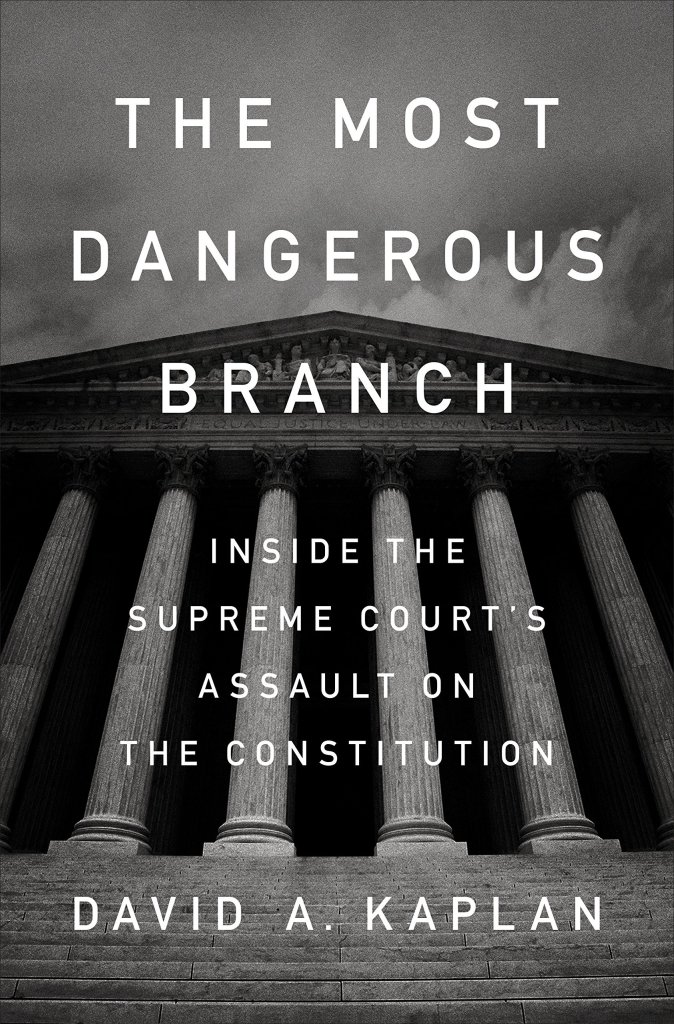 This conversation has been condensed and edited for length and clarity.