If you climb one of the many buttes that rise above western North Dakota, you’ll gaze upon a landscape of roaring methane flares, hidden pipelines and over 12,800 active oil wells. This is the Bakken oil boom, and it has helped make America the top world producer. But Cody Two Bears has a very different story to tell. “When Europeans first came to Turtle Island 500 years ago, we knew how to take care of this land and taught them how to live,” says Two Bears, referring to a name for North America used by many Native Americans. “Now the world is falling apart, so it’s time when us as Native people have to use our ancient wisdom to show this country how to live sustainably. And what better way to do that than with renewable energy?”

When protests against the Dakota Access Pipeline erupted on the Standing Rock Indian Reservation in 2016, Two Bears, 34, was a tribal council member representing Cannon Ball, the community that hosted the Oceti Sakowin Camp, a historic gathering that involved hundreds of Native tribes and spanned the latter half of 2016. The following year, he conceived the idea for an organization called Indigenized Energy, with the aim of bringing renewable energy to Native communities. Funding from a number of pro-solar groups helped make the vision a reality, and this past February the first project was completed at Standing Rock, a 300-Kilowatt solar array located just three miles from the controversial pipeline. Starting in July energy from the array will power the Cannon Ball Youth Activity Center and the Veterans Memorial Building, which housed visitors and served as a spot for meals and showers during the 2016 protests.

The people of Standing Rock helped build the array, they will benefit from its energy, and they have been educated on how to take care of the equipment. “We are tired of the sad Indian story,” says Two Bears. “What we need is powerful inspiring stories, we need to empower our kids to want to be a part of their communities and set a platform for them to live sustainably for the next 250 years.”

While the Green New Deal and United Nations climate reports make regular headlines, a less publicized push for renewable energy has been blazing across Native American communities. On South Dakota’s Pine Ridge Indian Reservation, the Thunder Valley Community Development Corporation aims to “overpower intergenerational poverty” by building a sustainable community largely powered by solar. The Winnebago Tribe of Nebraska has already installed 400 kilowatts of solar with plans for more, and the Forest County Potawatomi in Wisconsin have developed several arrays under a strong pro-green initiative. “Solar energy is spreading like wildfire through tribal nations right now,” says Robert Blake, a member of Minnesota’s Red Lake Band of Ojibwe Indians and founder of a solar installation company called Solar Bear. Solar energy, says Blake, can bring jobs and economic development to tribal communities, and tackle problems like poverty and addiction by giving people purpose. “It’s more than just a job, it’s saving Mother Earth and protecting the sacred, and that is engrained in our DNA as Native peoples,” he says.

The movement has also entered government. Last November, Minnesotans elected Peggy Flanagan, of the White Earth Band of Ojibwe, as lieutenant governor, the highest-ranking Native woman elected to executive office in the country. “We need to stop burning fossil fuels because it pollutes our environment,” Flanagan said in March, joining the governor in a plan to achieve 100 percent clean energy in Minnesota by 2050. Also in November, the first two Native American women were elected to Congress, Sharice Davids, of the Ho-Chunk Nation in Kansas, who has promised bold action on climate change, and Deb Haaland, of New Mexico’s Pueblo of Laguna tribe. Haaland attended the Standing Rock protests and is adamant about renewable energy. “The future of our planet depends on us doing whatever we can right now,” she told Vox last year. “If we don’t have our Earth, we don’t have anything.”

Among non-native leaders Standing Rock has often served as an inspiration on renewable energy. New York Congresswoman Alexandria Ocasio-Cortez has said that it was “from that crucible of activism” that she was inspired to run for Congress. Hawaiian Congresswoman Tulsi Gabbard, a Presidential candidate in the 2020 race, was the only sitting member of Congress to attend the 2016 protests, a year later she drafted the Off Fossil Fuels for a Better Future Act. The proposed legislation has similar ambitions to the Green New Deal and support from a number of environmental groups. “Standing Rock was that shift in a collective consciousness,” South Dakota state Senator Red Dawn Foster, of the Lakota and Dine tribes, told Native News in December. “Standing Rock sprang people out of their shell,” says Two Bears. “People are starting to stand up all over the world to protect what’s sacred in their communities.”

Still, Native leaders point out their communities, along with other communities of color, have often taken the pollutive brunt of the fossil fuels industry. Extraction has left scars on the land, pollution-spewing power plants and large pipelines like Dakota Access are regularly sited on or near their land, and Native communities often pay significantly more for energy than their non-Native neighbors. For example, Cannon Ball has often paid around 14 cents a kilowatt hour for electricity, whereas an hour north in Bismarck the rate is roughly half that.

“Standing Rock is what woke you people up, but we have known for a long time that the colonial capitalism corporate model is attacking this world,” says Solar Bear’s Blake. Last year, his company installed a solar array on Red Lake’s main government building and has plans for arrays at the tribal college, a housing project in South Minneapolis and two tribal casinos. “I was really disturbed by the disparities in my community,” says Blake. “I realized that the energy system dominant across this country is not in line with Native values, and the solution that I came up with is that tribal nations need to create their own energy companies using renewable energy sources.” One important step, he adds, is to create a federal-level Tribal Utility Commission to give Native people more voice in citing energy infrastructure projects like the Dakota Access Pipeline. 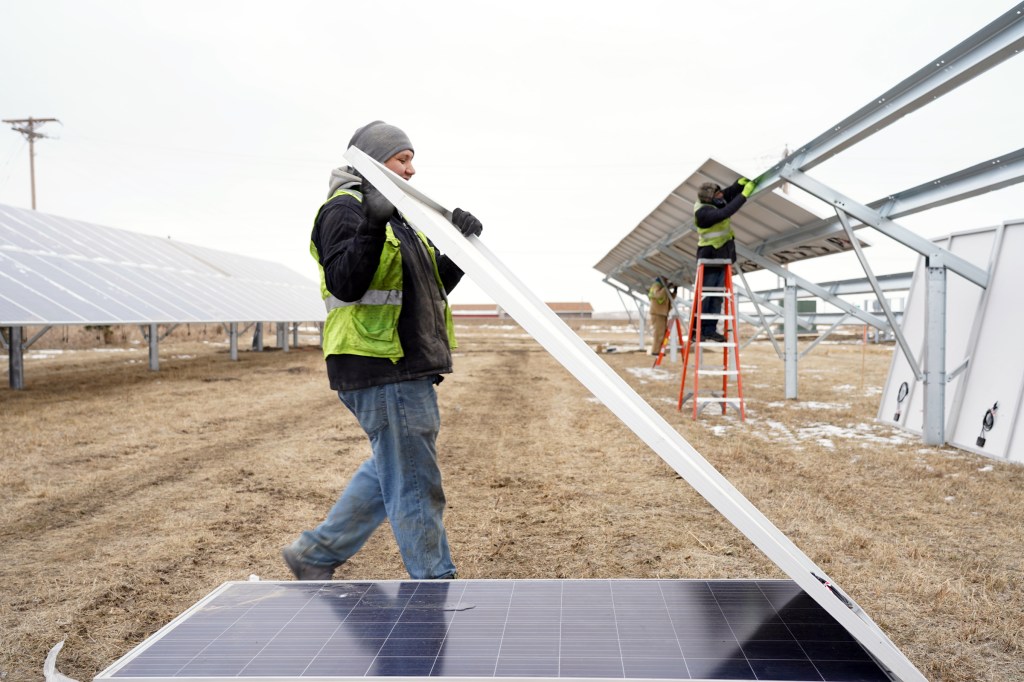 In March, Blake helped lead a four-day solar job training session at United Tribes Technical College in Bismarck. More people signed up than they had seats for. “After the conflict at Standing Rock there is much healing to be done,” says James Kambeitz, co-founder of a North Dakota-based solar technology company called Lightspring that helped sponsor the training. “We need to put aside all differences and create a sustainable way to live on this planet.”

Back in the heart of the Bakken is the Fort Berthold Indian Reservation, which encompasses three Native tribes and where Lisa DeVille and her husband Walter DeVille Sr. help lead an environmental advocacy group, called Fort Berthold Protectors of Water & Earth Rights. In July 2014, one million gallons of oil-industry waste spilled from a pipeline and into a ravine that drains into the tribe’s main reservoir for drinking water. Duke University researchers revealed in a 2016 paper that the spill laced the land with heavy metals and radioactivity. “It leaked for the whole July 4th weekend,” says DeVille. “Did it get into our creek? Did it get into our water intake? We don’t know, these are all the questions I’ve been asking.” Two Bears says one Fort Berthold community recently contacted him, eager to install a solar array.

“There is a story in our culture about a group of medicine men that had a meeting long ago,” says Kendrick Eagle, a leading voice in the climate change youth movement, and Director of a group called Indigenized Youth. “They prophesied how in seven generations young people would stand up all around the world and create a movement and spark change — that is us.”