Stacey Abrams still had options. As late as Friday morning, her campaign was considering multiple legal paths to challenging the certification of her Republican opponent in the Georgia gubernatorial race, Brian Kemp,. Abrams could have pushed for a new election in Georgia, an unprecedented step. Late Friday afternoon, Abrams gave a speech in which she concluded her historic run, but refused to credit Kemp as the true victor. “Concession means to acknowledge an action is right, true or proper,” she told her supporters. “As a woman of conscience and faith, I cannot concede. But my assessment is that the law currently allows no further viable remedy.”

Her comments could have come off as bitter, especially in an America that judges black anger so harshly.

Everything You Need to Know About Georgia's New Voting Law

However, as I followed the Abrams campaign and listened to virtually every word she spoke over the last several months, I never heard her allege that she was being directly victimized. (President Trump, on the other hand, falsely told Fox News after the election that it “was stacked against Brian.”)

The more than 200 polling precincts that were closed, the 53,000+ registrations that were suspended and the untold thousands of voters who were purged from the rolls were not a specific attack on the Abrams campaign. The voter suppression we witnessed in Georgia was not happening because Abrams is a black woman; this was a consequence of a Republican Party that has taken advantage of a neutered Voting Rights Act and shortchanged millions of their small-d democratic voice. This was bigger than Stacey Abrams.

Abrams, speaking with Rolling Stone by phone Sunday, was quick to point to how the issues at hand were systemic. “What was very clear, and very evident, is that this was gross mismanagement of our elections process in Georgia,” she says. “And as someone who has always pursued public service for exactly that reason, to serve the public — my recourse in my mind was best served by making sure no one else had to do this. That no one else had to try to strike back against someone who was the architect of the suppression, but was also the judge of whether the suppression happened. That is inexcusable, and indefensible, but it also illuminated how fragile our system can be when we do not hold people to account every time.”

For all of the hubbub about her being the first African American woman nominated by a major party in a governor’s race — in any state, let alone a Southern one — Abrams used her anointed pulpit to bring attention to issues that weren’t specific to her (political) race. Yes, she faced particularly difficult circumstances as a black Democratic woman running against a sitting Secretary of State who showed no shyness about manipulating the race to his benefit and giving voice to the Republican fear of voters actually voting. But by virtually any measure, Abrams’ bid was a triumph: She received a little more than 1.9 million votes, nearly 600,000 more than outgoing governor Nathan Deal netted in 2014 when he won the race.

“Georgia is a purple state now, with the slimmest margins since 1966,” Abrams notes, matter-of-factly. “My opponent did not outperform Republican presidential candidates. I did. I outperformed Democratic presidential candidates, and what that signals is that this is a competitive state, and that the razor-thin margin is one without a difference, particularly if we can truly address with Fair Fight Georgia, with our lawsuits, but with also our infrastructure, if we can address electoral reforms in the state of Georgia,” Abrams adds. “That means that I did a good job!”

A cynic might argue that she may have elevated the issue of voter suppression to gain cover for an eventual loss. But Abrams was waging war on this front with her New Georgia Project since at least 2014, seeking to register more voters of color and increase turnout.

Now Abrams has announced a new organization, the aforementioned Fair Fight Georgia, which she described in her speech as “an operation that will pursue accountability in Georgia’s elections and integrity in the process of maintaining our voting rolls.” It was surprising, and not, that Abrams had such an effort ready to launch on the same day that she ended her campaign. “If you’d asked me about Fair Fight Georgia on November 5th, I had no idea I was going to do it, didn’t know it existed,” Abrams says. “But I knew during the course of the campaign, the more I thought of voter disenfranchisement — that, you know, some communities didn’t have the power cords necessary to run the machines, and some communities didn’t have enough paper for provisional ballots — that I wanted to use the office of the governor to start to remedy it. But with that not being an opportunity, in this case, the next best thing is to leverage our civic responsibility and start an organization that will do the same.”

Among the many rumored positions that pundits have Abrams running for next — including Republican David Perdue’s U.S. Senate seat in 2020 — Georgia Secretary of State is not one of them. (She tells Rolling Stone she plans to campaign heavily this month for Democrat John Barrow, whose fate will be decided in a December 4th runoff.) “My approach to running for office has always been driven by where can I do the most good, and where are my skills best applied,” Abrams said.

For now, that seems to be the voting-rights fight, one that Abrams doesn’t think should be looked upon as partisan. “Voter suppression takes different forms,” she says. “[It is] based on a range of issues. Race is one of them, absolutely. But so is poverty. It is not a surprise some of the poorest communities in Georgia had the least amount of capacity to administer their elections. It is not a surprise that the people who are the least likely to raise a cry do so, or cannot do so, because they don’t have the resources to know what the solution is. We need to recognize that whether you’re looking at Georgia, or North Carolina, or North Dakota or Florida, that the disenfranchisement of voters, the suppression of votes, cuts across every community, and therefore it cuts across partisanship.” 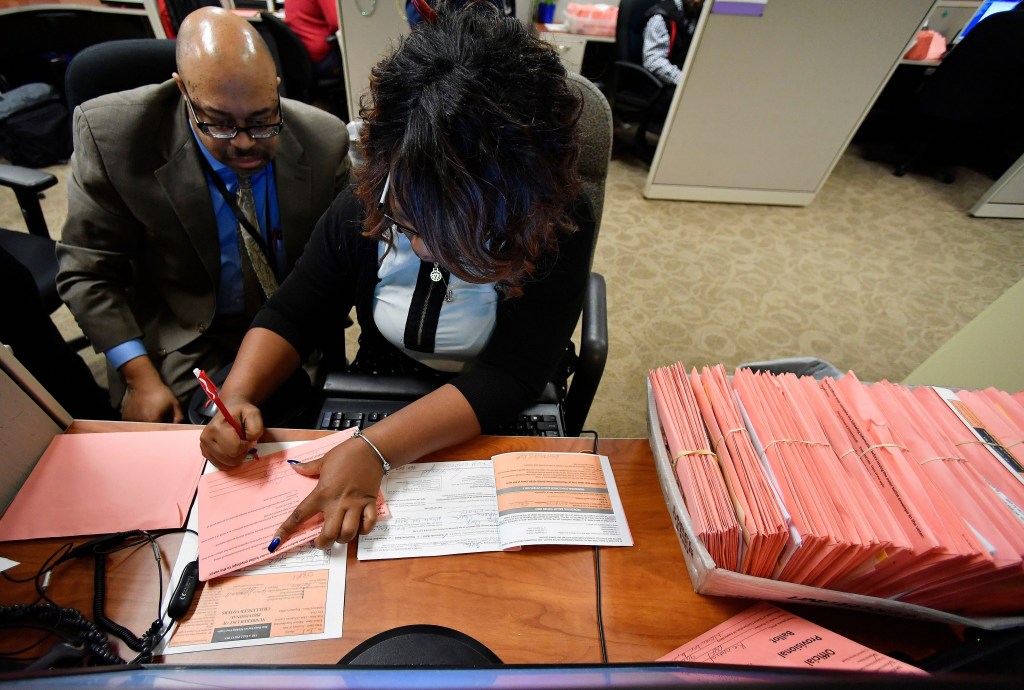 A Fulton County election worker counts provisional ballots, in Atlanta. Malfunctioning voting machines, missing power cords, and hours-long lines at the polls are being scrutinized in Georgia, where the governor’s race is still undecided as votes are still being tallied. Photo credit: Mike Stewart/AP/REX Shutterstock

If Supreme Court Justice John Roberts had been right five years ago, none of this would be necessary. Roberts famously wrote in 2013, in the same ruling that eviscerated the Voting Rights Act, that “things have changed dramatically” in the nearly 50 years since the act was signed into law. The Jim Crow discrimination that had created a need for it 1965 wasn’t part of contemporary America, he argued, using the very progress that the act helped achieve to invalidate it. “Today the Nation is no longer divided along those lines, yet the Voting Rights Act continues to treat it as if it were,” he wrote.

It is plain now that Roberts was full of shit. America had a short run as something approaching a democracy, and even the successes of candidates like Abrams are tempered by the knowledge that victories are still being denied — if not in such a comically villainous way that Kemp paved his way to the governor’s mansion.

“Every election going forward will benefit from trying to fix the system,” Abrams says, “and the reality is fixing the system benefits people I may never want to vote for. It will benefit those I may strongly object to. But the reality is, democracy requires that everyone have an opportunity, not that you’re guaranteed a victory, but that you have the chance to wage a fair contest. And that did not happen in the state of Georgia.”

If Democrats are smart, the Abrams campaign and others like it will live on as a template on at least two fronts: How to prioritize time and resources driving turnout from the base rather than catering to voters who will never choose you; and how to respond to racism, systemic or otherwise, from your opponent. Should we hope to make progress on voting rights, the issue Abrams seems to care about more than her own election, we can’t afford to let this election be all about her. That is clearly not what she wants.