Taibbi: Roger Ailes Was One of the Worst Americans Ever - Rolling Stone
×
×

On the Internet today you will find thousands, perhaps even millions, of people gloating about the death of elephantine Fox News founder Roger Ailes. The happy face emojis are getting a workout on Twitter, which is also bursting with biting one-liners.

What did Roger Ailes die of, aside from perfect timing

Roger Ailes has died. Another proud Confederate monument taken down this week. Smdh.

Roger Ailes has died. Wow. Sending deep and heartfelt condolences to everyone who was abused, harassed, exploited, and unjustly fired by him

When I mentioned to one of my relatives that I was writing about the death of Ailes, the response was, “Say that you hope he’s reborn as a woman in Saudi Arabia.”

Ailes has no one but his fast-stiffening self to blame for this treatment. He is on the short list of people most responsible for modern America’s vicious and bloodthirsty character.

We are a hate-filled, paranoid, untrusting, book-dumb and bilious people whose chief source of recreation is slinging insults and threats at each other online, and we’re that way in large part because of the hyper-divisive media environment he discovered.

Ailes was the Christopher Columbus of hate. When the former daytime TV executive and political strategist looked across the American continent, he saw money laying around in giant piles. He knew all that was needed to pick it up was a) the total abandonment of any sense of decency or civic duty in the news business, and b) the factory-like production of news stories that spoke to Americans’ worst fantasies about each other.

Like many con artists, he reflexively targeted the elderly – “I created a TV network for people from 55 to dead,” he told Joan Walsh – where he saw billions could be made mining terrifying storylines about the collapse of the simpler America such viewers remembered, correctly or (more often) incorrectly, from their childhoods.

In this sense, his Fox News broadcasts were just extended versions of the old “ring around the collar” ad – scare stories about contagion. Wisk was pitched as the cure for sweat stains creeping onto your crisp white collar; Fox was sold as the cure for atheists, feminists, terrorists and minorities crawling over your white picket fence.

Ailes launched Fox in 1996 with a confused, often amateurish slate of dumb programs cranked out by cut-rate and often very young staffers. The channel was initially most famous for its overt shallowness (“More News in Less Time” was one of its early slogans) and its Monty Python-style bloopers. But the main formula was always the political scare story, and Fox quickly learned to mix traditional sensationalist tropes like tabloid crime reporting with demonization of liberal villains like the Clintons.

Hillary Clinton in particular was a godsend for Fox. The first lady’s mocking comments about refusing to stay home and bake cookies – to say nothing of the “I’m not sitting here, some little woman, saying ‘Stand By Her Man’ like Tammy Wynette” quote – were daggers to the hearts of graying middle Americans everywhere. What’s the matter, Ailes’ audiences wondered, with Tammy Wynette? 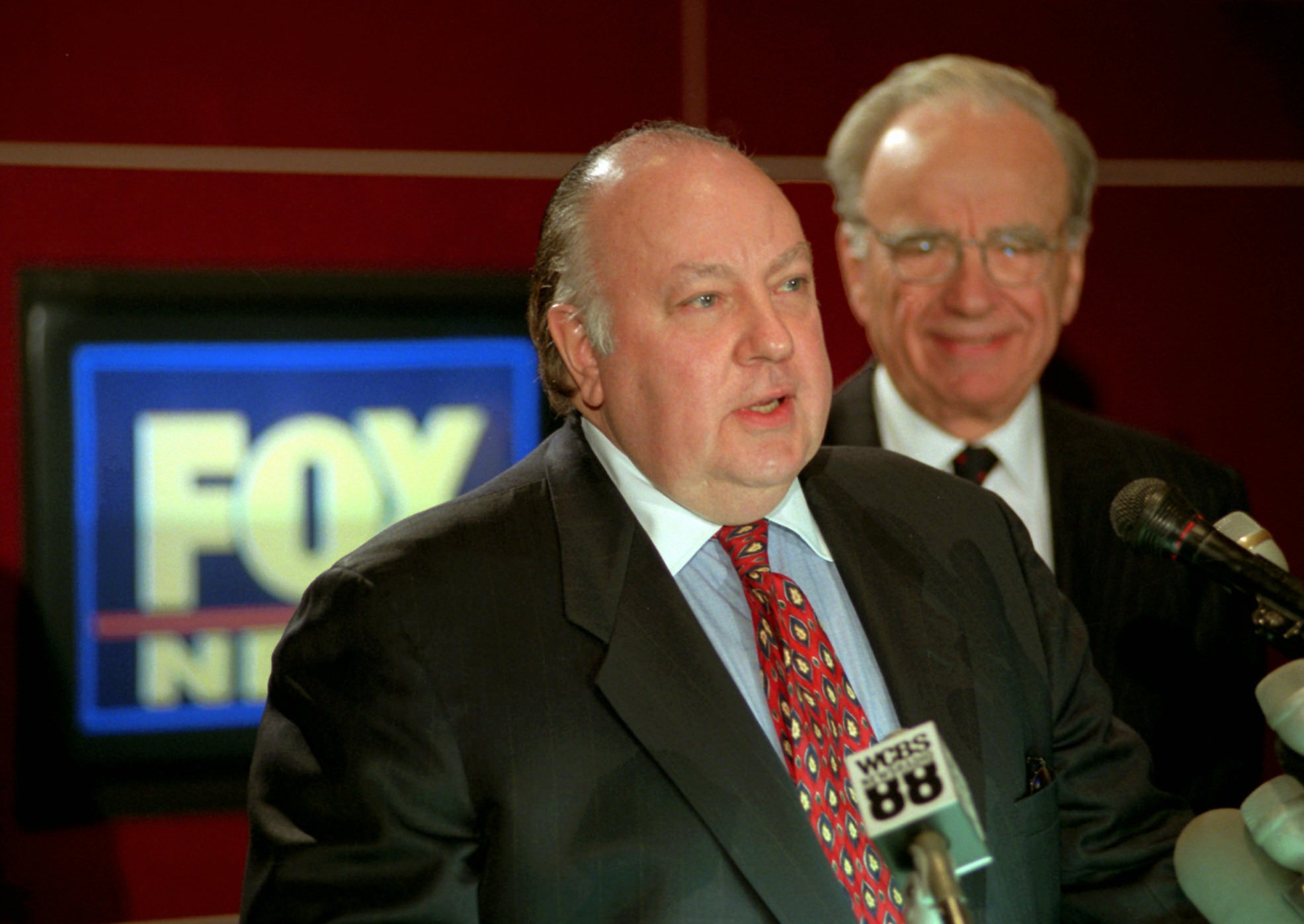 So they tuned into Fox, which made ripping Hillary and other such overeducated, cosmopolitan, family-values-hating Satans a core part of its programming.

But invective, like drugs or tobacco or any other addictive property, is a product of diminishing returns. You have to continually up the ante to get people coming back. So Ailes and Fox over the years graduated from simply hammering Democratic politicians to making increasingly outlandish claims about an ever-expanding list of enemies.

Soon the villains weren’t just in Washington, but under every rock, behind every corner. Immigrants were spilling over the borders. Grades were being denuded in schools by liberal teachers. Marriage was being expanded to gays today, perhaps animals tomorrow. ACORN was secretly rigging vote totals.

Hollywood, a lost paradise Middle America remembered as a place where smooth-talking guys and gals smoked cigarettes, gazed into each others’ eyes and glorified small-town life and the military, now became a sandbox for over-opinionated brats like Sean Penn, Matt Damon and Brangelina who used their fame to pal around with socialist dictators and lecture churchy old folks about their ignorance.

The Fox response was to hire an endless succession of blow-dried, shrieking dingbats like Laura Ingraham, author of Shut Up and Sing, who filled the daytime hours with rants about every conceivable cultural change being the product of an ongoing anti-American conspiracy. Ingraham even derided muffin tops as evidence of America’s decaying values.

Ailes picked at all these scabs, and then when he ran out of real storylines to mine he invented some that didn’t even exist. His Fox was instrumental in helping Donald Trump push the birther phenomenon into being, and elevated the practically nonexistent New Black Panthers to ISIS status, warning Republicans that these would-be multitudinous urban troublemakers were planning on bringing guns to the GOP convention.

The presidency of Donald Trump wouldn’t have been possible had not Ailes raised a generation of viewers on these paranoid storylines. But the damage Ailes did wasn’t limited to hardening and radicalizing conservative audiences.

Ailes grew out of the entertainment world – his first experience was in daytime variety TV via The Mike Douglas Show – but he later advised a series of Republican campaigns, from Ronald Reagan to George H.W. Bush to Trump.

So when he created Fox, he merged his expertise from those two worlds, mixing entertainment and political stagecraft.

The effect was to politicize the media, a characteristic of banana republics everywhere. When Ailes decided to cordon off Republican audiences and craft news programming targeted specifically to them, he began the process of atomizing the entire media landscape into political fiefdoms – Fox for the right, MSNBC for the left, etc. 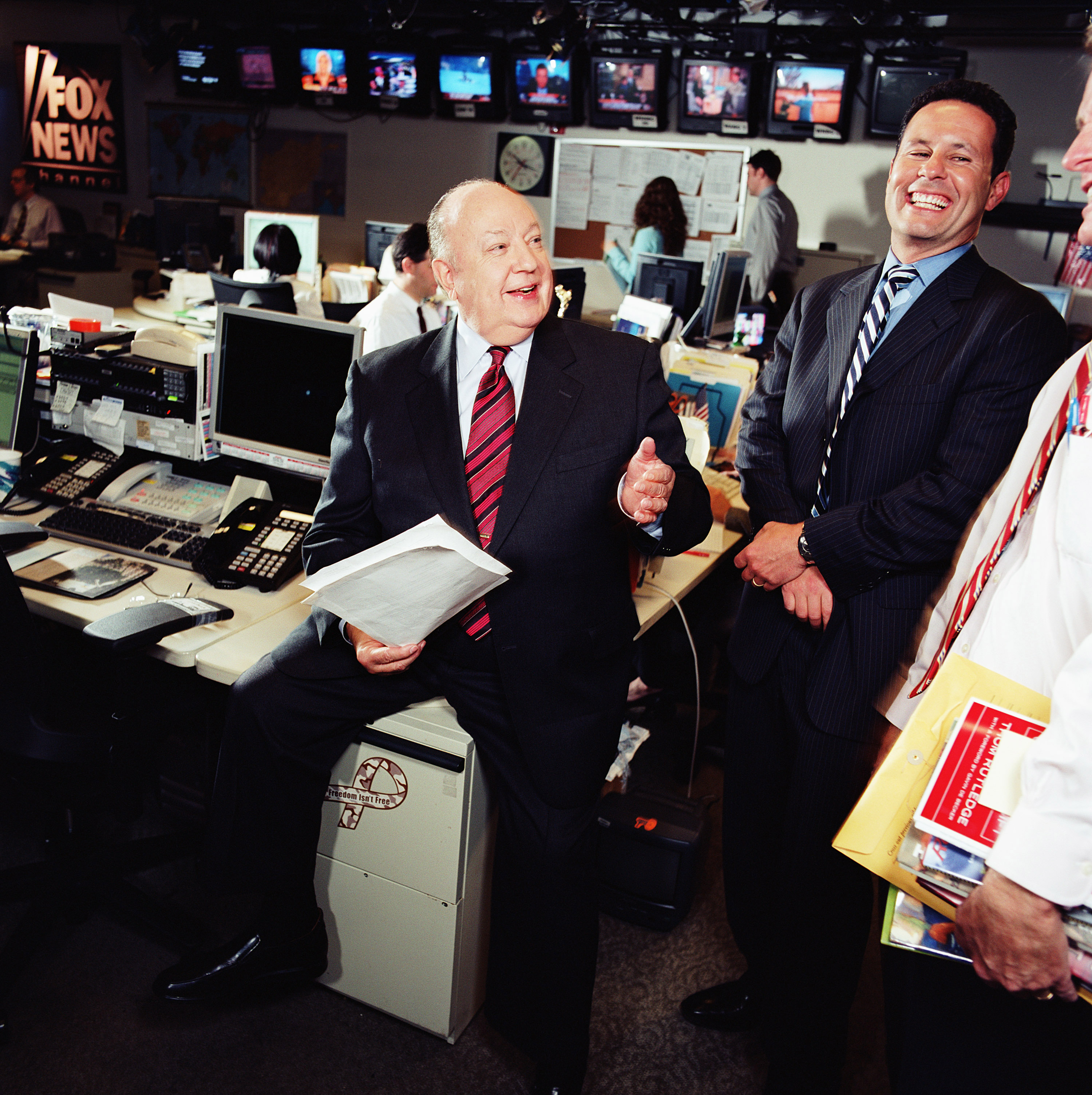 What most of us are buying when we tune in to this or that channel or read this or that newspaper is a reassuring take on the changes in the world that most frighten us. We buy the version of the world that pleases us and live in little bubbles where we get to nurse resentments all day long and no one ever tells us we’re wrong about anything. Ailes invented those bubbles.

It’s not that Trump isn’t or shouldn’t be frightening. But it’s conspicuous that our media landscape is now a perfect Ailes-ian dystopia, cleaved into camps of captive audiences geeked up on terror and disgust. The more scared and hate-filled we are, the more advertising dollars come pouring in, on both sides.

Trump in many ways was a perfect Ailes product, merging as he did the properties of entertainment and news in a sociopathic programming package that, as CBS chief Les Moonves pointed out, was terrible for the country, but great for the bottom line.

And when Ailes died this morning, he left behind an America perfectly in his image, frightened out of its mind and pouring its money hand over fist into television companies, who are gleefully selling the unraveling of our political system as an entertainment product.

The extent to which we hate and fear each other now – that’s not any one person’s fault. But no one person was more at fault than Roger Ailes. He never had a soul to sell, so he sold ours. It may take 50 years or a century for us to recover. Even dictators rarely have that kind of impact. Enjoy the next life, you monster.

A previous version of this article incorrectly identified Kathleen Sullivan as having worked for Fox. She worked for CNN at the time referred to in the piece.