The 2020 Democratic primary field is already stress-inducingly crowded, and you’d be forgiven if you’re having trouble keeping track of everyone. Well, lucky for all of us, nearly every serious potential candidate has a book that lays out his or her policy positions while also offering up some personal backstory and behind-the-scenes anecdotes. It’s practically a right of passage at this point. And, of course, memoirs are a convenient way for politicians to make the rounds through the talk-show circuit and introduce themselves to millions of Americans. To gear up for 2020, here are 15 books to add to your reading list as you get to know the likely power players from the upcoming presidential election cycle.

Kamala Harris, The Truths We Hold: An American Journey 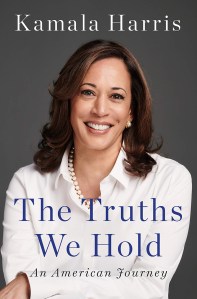 In her highly anticipated memoir, The Truths We Hold, Harris walks readers through her seriously impressive resumé by recounting her rise through the California judicial system and her 2016 election to the U.S. Senate. She makes her policy positions clear and contrasts herself to Donald Trump in every way, while also offering some insight on the people who have shaped her life, particularly her mother. But if you’re looking to understand Harris on a significantly deeper level, this memoir might leave you wanting more. While it’s much more personal than her previous book, it’s still a hyper-polished look at her life and career designed to soft-launch a presidential campaign. (Find it here)

Joe Biden, Promise Me, Dad: A Year of Hope, Hardship, and Purpose

It's Real Now: Joe Biden Has Signed the Climate Bill Into Law

The Biden Climate Bill: Will It Save Us?

At this point in his political career, there’s little that the public doesn’t already know about the former vice president. But in 2017’s Promise Me, Dad, his deeply personal account of losing his son Beau to brain cancer in 2015 shows what was happening behind closed doors during one of the most difficult periods of his life. The decision of whether or not to run in 2016 hovers over Biden and his family as they deal with Beau’s failing health and eventually his death. Obviously, we know what Biden decided. But the message throughout the book is clear: If the timing is right, he wants to run again.  (Find it here)

Elizabeth Warren, This Fight Is Our Fight: The Battle to Save America’s Middle Class

Warren was the first person to officially launch a 2020 presidential exploratory committee, so it’s safe to say she’s running. The Massachusetts senator has made a political career out of championing success for the middle class while other lawmakers actively work in favor of big banks, an idea that she delves into in her 2017 book, This Fight Is Our Fight. She breaks down the inner workings of Washington in an easily accessible way and weaves in stories about her own upbringing as part of a working-class family in Oklahoma. And despite the subject matter, she still finds a way to convey a feeling of inspiration and hope for the future of America’s middle class. (Find it here)

Julián Castro, An Unlikely Journey: Waking Up from My American Dream

In 2018’s An Unlikely Journey, the former mayor of San Antonio and Housing and Urban Development Secretary for President Obama details his life growing up Latino in San Antonio’s West Side as part of a multigenerational Mexican-American family. As the subtitle “Waking Up From My American Dream” suggests, Castro discusses the roadblocks that minorities face in the U.S., but his book still strikes a hopeful, optimistic tone. In an interview with NBC News, Castro dismissed reviews that criticized him for not being more revealing of his past, saying that there simply wasn’t anything particularly scandalous to share. (Find it here)

Beto O’Rourke, Dealing Death and Drugs: The Big Business of Dope in the U.S. and Mexico

O’Rourke has yet to write the traditional “get-to-know-me” political memoir, but back in 2011, the then-El Paso City Council Representative co-authored a book about America’s “War on Drugs” and the deadly effect it was having on El Paso’s neighboring city across the border, Ciudad Juárez. Dealing Death and Drugs effectively communicates complex, dense subject matter in a way that makes sense for the average person, and it presents clear solutions. While a lot has changed with regards to drug legislation and the U.S.-Mexico border since 2011, O’Rourke’s book still holds up and offers insight into his values and beliefs. (Find it here)

Bernie Sanders, Where We Go From Here: Two Years in the Resistance

There’s been endless analysis over the past two about Sanders’ role in the 2016 election cycle that ultimately culminated with President Trump, and that conversation will likely carry on into 2020. In Where We Go From Here, Sanders shares his own interpretation of events while also recalling his progressive record in Congress and detailing how he’s helped lead the fight against Trump and his policies. And for those who have somehow forgotten where he stands, Sanders reaffirms his positions on everything from Medicare to minimum wage to climate change, and offers his thoughts on the future of grassroots activism. (Find it here)

Amy Klobuchar, The Senator Next Door: A Memoir from the Heartland

Senator Klobuchar’s down-to-earth personality and Midwestern charm are evident throughout her 2015 memoir, The Senator Next Door. The three-term senator from Minnesota details her childhood, as she watched her father battle alcoholism and dealt with her parents’ divorce, and then goes on to share how her daughter’s early health problems led to her first foray into politics as she advocated for longer hospital stays for new mothers. Her stories from her political career in Washington show why she’s one of the most respected senators, across party lines. Throughout the book, she comes across as an honest public servant who truly wants to work for the American people and solve problems facing everyday citizens. (Find it here)

The Democratic base still seems somewhat divided over New Jersey Senator Cory Booker’s place within the party. He certainly has the charisma of a political star, but his ties to Wall Street still give many liberal voters cause for concern. In his 2016 memoir, United, he sought out to take control of the narrative surrounding him and share what he learned from his experiences living and working in public service in Newark, NJ. Booker’s strength is his ability to connect with people through impassioned rhetoric, which he uses here to talk about crucial issues ranging from mass incarceration to equal economic opportunities. (Find it here)

John Hickenlooper, The Opposite of Woe: My Life in Beer and Politics

Colorado’s former governor brings his signature humor and easygoing demeanor to his 2016 memoir, The Opposite of Woe. As far as political memoirs go, it’s refreshingly honest, especially when it comes to Hickenlooper’s personal life — he’s probably the only potential presidential candidate to admit to taking a nude selfie. A large portion of the book recalls his childhood as a self-described “nerd,” his decade at Wesleyan University, and his early career in the brewery business before his unexpected venture into Colorado politics. For more on Hickenlooper, read our interview with him.  (Find it here)

If you’re more into in-the-weeds policy talk rather than charming personal stories, give Ohio Senator Brown’s 2006 book about trade wars and corporate lobbying a read. Considering memoirs seem to be a prerequisite for running for president and Brown hasn’t published a book since 2006, that might be a sign of where he stands on all the 2020 rumors. Nonetheless, Myths of Free Trade has been praised for being an inside look into why American trade policies as they are will continue to fail. (Find it here)

Kirsten Gillibrand, Off the Sidelines: Speak Up, Be Fearless, and Change Your World

Similar in content and in tone to Sheryl Sandberg’s Lean In, Gillibrand’s 2014 book, Off the Sidelines, aims to inspire and empower ambitious women who are striving to “have it all” at work and at home. The junior New York senator mixes in her personal stories of juggling motherhood with a demanding congressional career, while also discussing how she’s tackling the systemic barriers in place by introducing legislation that supports affordable daycare and paid family leave. The conversation surrounding women in the workplace has evolved since the book’s 2014 publication, but Off the Sidelines encapsulates Gillibrand’s desire to be at the forefront of advocating for women and families. (Find it here)

John Kerry, Every Day Is Extra

Kerry hasn’t ruled out another bid for the presidency, and if he decides to run, his recent experience as Secretary of State might make the difference this time around. His long and varied career allows for plenty to reflect on in his latest memoir, Every Day Is Extra, in which he looks back on his time in Vietnam, his painful loss to George W. Bush in 2004, and his experience serving in Obama’s Cabinet. Kerry shares a few of his regrets throughout the book and the effect his close friendships have had on his life, but doesn’t divulge too much about his personal life. It’s an informative read, even if it’s not the most thrilling—The New York Times called the memoir “idealistic and reassuringly dull.” (Find it here)

Michael Bloomberg, Climate of Hope: How Cities, Businesses, and Citizens Can Save the Planet

Bloomberg has mused about running for president for the better part of a decade, and this election cycle might finally be the one where he follows through. He co-authored his most recent book, Climate of Hope, with former Sierra Club Executive Director Carl Pope, and the result is an optimistic look at how we can tackle the challenges of climate change through innovation and collaboration. It’s not a political campaign book in the traditional sense, but considering climate change will arguably prove to be the biggest public health and economic threat this country has faced thus far, it’s important to know how a potential president intends to address the issue. (Find it here)

Howard Schultz, From the Ground Up: A Journey to Reimagine the Promise of America

After Schultz announced he was stepping down as Starbucks’ executive chairman in 2018, rumors arose with regards to his presidential ambitions. And now that he has a book coming out this January that he describes as “part memoir, part blueprint for how to induce positive change,” it certainly seems like he’s trying to re-introduce himself to mass America. From the Ground Up will let readers in on his childhood growing up in the Brooklyn housing projects and then his career building Starbucks from the ground up. In other words, it sounds like the quintessential American Dream story. (available for pre-order, out January 28)

If you haven’t heard of Buttigieg yet, the young mayor of South Bend, Indiana, you’re not alone. But he’s someone who should be on your radar, as his profile within the Democratic Party continues to rise at a rapid pace. His story is rather incredible, and has all the makings of a compelling memoir: Buttigieg is an openly gay Afghanistan veteran and Harvard graduate who left his successful private sector career to return to his hometown of South Bend to serve the community through public office. Shortest Way Home is expected to highlight how he was able to transform the city of South Bend, and how those same practices can apply to the country at large. (available for pre-order, out February 12)