Milo Yiannopoulos, the revolting bête noire of the Alt-Right, a person who is such a reactionary American that he’s British, seems to have made a critical mistake. Surely, conventional wisdom holds, even Republicans will balk at being asked to equate liberty with child molestation?

Along with longtime Breitbart cohort Steve Bannon, the foppish Yiannopoulos – the co-author of the Alt-Right’s unofficial manifesto – has until now been extremely successful in selling the various intellectual justifications for Trumpism.

In particular, he’s been one of the main voices pushing the idea that Donald Trump’s most lurid and offensive behaviors are “conservative,” because they represent a front in the war against speech limits and political correctness.

“He’d rather grab a pussy than be one,” was Milo’s pithy take on then candidate Trump’s Access Hollywood scandal.

Not all traditional conservatives bought these clunky rhetorical gymnastics, which were designed to give Fox viewers permission to vote a Bible-averse, model-humping New Yorker into the White House. But enough did to win Trump the presidency.

Still, there has been a lingering unwillingness among the National Review/Weekly Standard crew of Reagan Republicans to embrace Yiannopoulos and all he represents. That unwillingness spilled into open conflict when the loathsome campus agitator was named a keynote speaker at this week’s Conservative Political Action Conference.

A blog called the Reagan Battalion re-circulated excerpts of a year-old interview of Milo by the Drunken Peasants podcast, in which he clearly endorses sex between men and underage boys.

Yiannopoulos talked about how “we get hung up on this kind of child abuse stuff,” dismissing what he calls the “oppressive idea of consent.”

“In the homosexual world particularly,” said Yiannopoulos, who is gay, “some of those relationships between younger boys and older men [are] sort of coming-of-age relationships … in which those older men have helped those young boys to discover who they are.”

When one of the podcast co-hosts suggested that it sounded like he was talking about Catholic priest molestation, Yiannopoulous quickly co-signed, claiming personal experience in that area.

“You know what?” he shouted. “I’m grateful for Father Michael. I wouldn’t give nearly such good head if it wasn’t for him.”

When challenged that he seemed to be endorsing pedophilia, Yiannopoulos then retreated to a semantic argument.

After a scandal blew up over these words, Yiannopoulos used a technique that Donald Trump has used often in the past two years: He simply claimed he didn’t say what he said.

Blaming “sloppy editing” for the controversy, Yiannopoulos insisted on his Facebook page, “I was talking about my own relationship when I was 17 with a man who was 29.” He added, “The age of consent in the UK is 16. That was a mistake.”

This was despite the fact that Yiannopoulos explicitly talked about “sexually mature” 13-year-olds in the context of who can and cannot be a consenting adult. He has made similar remarks before – he revels in them, in fact. When he appeared on the Joe Rogan podcast last summer, for instance, he couldn’t help himself when Rogan brought up the “semen warrior” culture in Papua New Guinea.

The furor currently raging over Yiannopoulos’s comments is exactly the sort of thing this professional button-pusher relishes. Like Trump, his shtick is to say crazy things to get attention, and then manipulate ears and eyeballs to his advantage mid-furor.

A favored tactic is to direct his audiences toward some overemotional sap who has made the mistake of calling for him to be banned, at which point he triumphantly declares himself a champion of liberty, and his enemies censors and authoritarians. 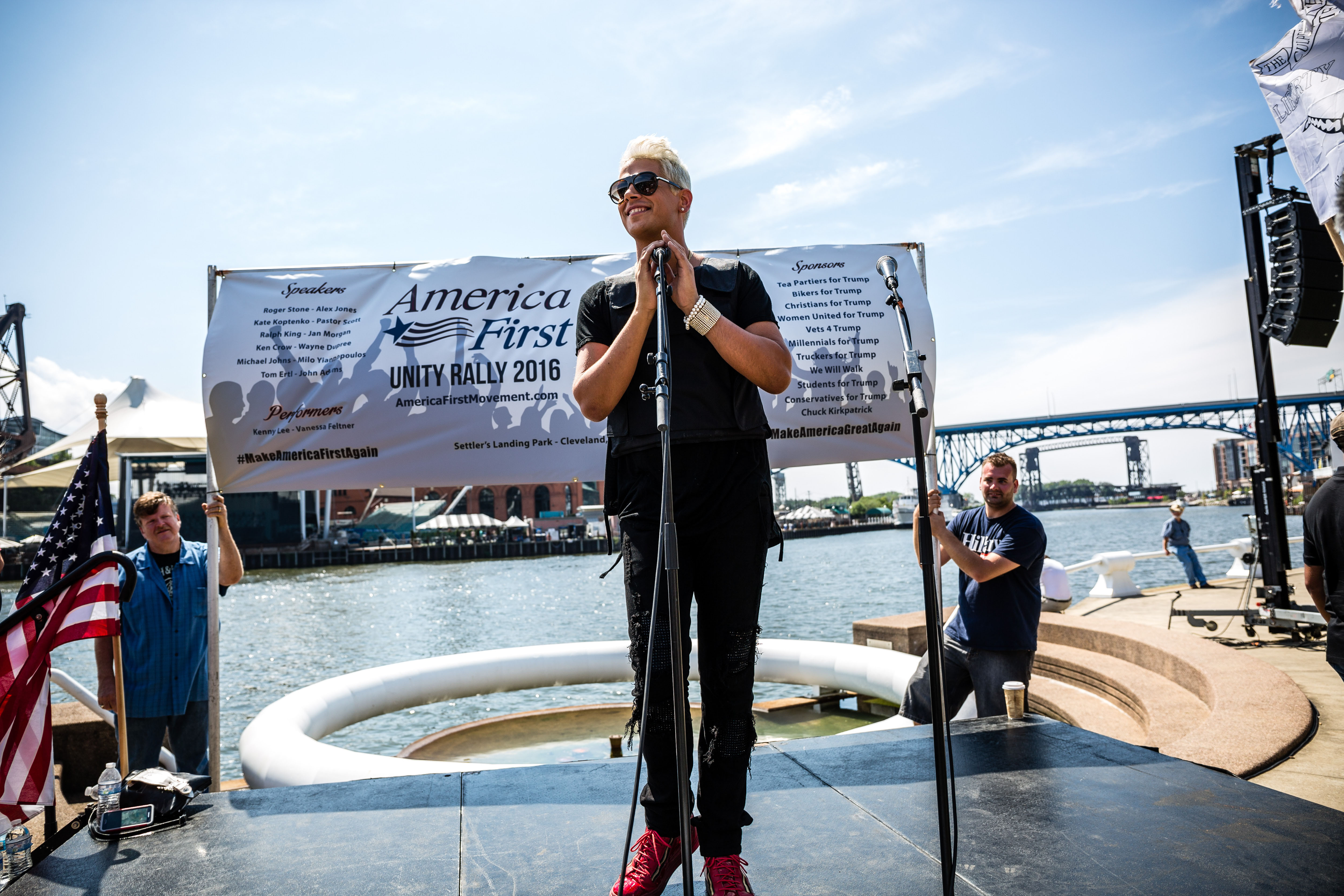 In his Alt-Right manifesto, Milo self-consciously celebrates the trolling phenomenon as something inspired, meaningful and “undeniably hysterical.” And like all trolls, Yiannopoulos thinks his provocations are brilliant, when actually he’s just a goof with an accent and a C-minus mind who says witlessly obnoxious things and through sheer accident of historical circumstance gets rewarded for it.

He seems genuinely to believe that he’s one of the first people ever to notice that you can make a good living through lying and the unscrupulous use of hate speech. With the confidence of a person who hasn’t yet discovered the depth of his own unoriginality, he leans into controversies instead of recoiling from them, sure he can always spin things in a pinch.

One of his main affectations is a flaunting of duplicity as a revolutionary virtue. For instance, it was predictable that this longtime critic of “victimhood culture” would cling to his own victimhood in a crisis.

“I am a gay man, and a child abuse victim,” he wrote, cloaking himself in multiple layers of the very identity politics he claims to despise. He even used AIDS patients as a human shield, which was a bit excessive even for him, but not out of character:

“If I choose to deal in an edgy way on an Internet livestream with a crime I was the victim of that’s my prerogative. It’s no different to gallows humor from Aids [sic] sufferers.”

The “oppressive idea of consent” rant seems to have created problems for Yiannopoulos. Staffers at Breitbart, where he is a senior editor, are threatening to walk out unless he’s fired. Moreover, he’s been disinvited from CPAC, a development he will no doubt portray as an overreaction by a defeated and humorless Republican establishment.

Milo’s obvious play will be to use all of this coverage as free PR, seeking to come out the other side with his rebel credentials burnished. He’ll recreate himself as a Republican martyr, unfairly maligned by a corrupt priesthood that fears the true movement.

On the outside, this looks like a mistake. The Bannonite Alt-Right crew Milo represents imagines itself a brilliant group of intellectual danger-seekers, but trying to sell boy-buggering to the American Conservative Union sure seems more stupid than daring (and it’s plenty daring).

The link between these two groups has always been tenuous at best. Really, it’s an absurd semantic misunderstanding, a classic Americanism, confusing the words “liberty” and “libertine.”

There’s a big difference between believing in limited government, and completely rejecting all behavioral and sexual morality. But people like Yiannopoulos and Trump have been successful at blurring these lines, because we’re not a very bright people. Also, we’re inexperienced when it comes to this kind of high-level political con artistry.

A dynamic that all good swindlers understand is that once you’ve gotten a person to make one embarrassing decision, it’s easier to get him to make the next one. A person who loses 10 grand trying to buy the Brooklyn Bridge is a good bet to spend 20 more chasing the loss. Con artists call this “reloading.”

The Trump phenomenon has been like this. Megachurch moms and dads across the country grit their teeth when the “grab them by the pussy” tape came out, quietly convincing themselves that “locker-room talk” was less horrifying than a Hillary Clinton presidency.

When they cast their votes weeks later, it was like a secret transgression that bound them to the new leader. This counter-intuitive brand of politics is very effective. It’s why no one should be too quick to put this week’s seeming fiasco with CPAC in the Republicans’ loss column.

But watch it work. A week from now, the same conservatives who are beating their breasts about Yiannopoulos now will go crawling back into the Trump camp to fight the hated liberals on a dozen other issues. They will look weak and indecisive, and privately will be demoralized, while the Trump/Bannon/Milo crew will look like poker players who won a bluff. It’s always about the next news cycle with these people.

Trolling doesn’t take brains. But it works, and it will keep working, until we learn to see through the provocations in real time.

Until he joined Trump’s team, Steve Bannon ran a news site that stoked hatred of everyone from women on birth control to President Obama. Watch here.