Something most people don’t know about Michael Cohen’s lawyer, Lanny Davis, is that he’s also currently representing a Ukrainian oligarch whose name is often linked to one of the most powerful mobsters in the world.

For the past four years, Davis — a 72-year-old former special counsel to former President Bill Clinton — has served as a registered foreign agent for Dmitry Firtash, who has been fighting to avoid extradition to Chicago, where he faces charges of international racketeering and money laundering. In registering with the Justice Department as Firtash’s foreign agent, Davis said his firm was being paid $80,000 a month — or about a million dollars a year — by a man described by prosecutors as an “upper-echelon” associate of Russian organized crime. The case against Firtash “seeks to protect this country, its commerce and its citizens from the corrupting influence and withering effects of international organized crime,” prosecutors wrote last year.

Firtash has acknowledged ties to Semion Mogilevich, although the exact nature of their relationship is unknown outside of a classified space. A chain-smoking, hulking Ukrainian-born gangster, Mogilevich appeared on the FBI’s 10 Most Wanted list during Robert Mueller’s tenure as the bureau’s director. A 1996 FBI report on Mogilevich’s organization said he was involved in prostitution, weapons trafficking, smuggling of nuclear materials, drug trafficking and money laundering. Mogilevich was indicted on racketeering charges in Pennsylvania in 2002 for his role in a publicly-traded magnet company later exposed as a money-laundering front. Several sources, including Alexander Litvinenko, a former KGB officer turned whistleblower who was murdered in London, said that Mogilevich had a relationship with Russian President Vladimir Putin. Mogilevich lives in Moscow, where some suspect he’s being protected by Russian intelligence.

“Mr. Firtash has denied any business or personal involvement with organized crime, in Russia or elsewhere,” Davis tells Rolling Stone. “Moreover, reports of such involvement have relied on innuendo and words such as ‘linked to’ or ‘associated with,’ not facts, or false allegations in a lawsuit filed many years ago in New York City that was dismissed on jurisdictional grounds and never re-filed.”

Davis is not exactly advertising the fact that he represents Firtash. Although Davis lists his past controversial clients in Africa and Honduras on his website, Firtash’s name is noticeably absent. Davis hardly ever talks about Firtash, at least not on the record, even though Justice Department filings make it clear that he and his colleagues at Davis, Goldberg & Galper frequently contact D.C. journalists about Firtash to pitch stories, issue statements and press releases, or to respond to questions.

Likewise, Firtash wasn’t mentioned in the flurry of coverage that Davis received after Cohen pleaded guilty last week to eight criminal charges, including campaign finance violations. In recent pieces, The Washington Post called Davis the “ultimate Clinton loyalist;” Esquire called him the “da Vinci of spin.” Davis referred to himself a “renowned legal crisis management expert,” but another way to describe his lucrative line of work is representing bad guys and telling us how good they are, something he’s been doing quite effectively with Cohen, Trump’s former fixer. In 2010, Davis was paid a million dollars a year to represent the brutally repressive dictatorship of oil-soaked Equatorial Guinea, and $100,000 a month to represent Ivory Coast, then on the brink of a civil war. “I took on a couple bad-guy countries that I thought I could make into good-guy countries,” Davis told the Post. 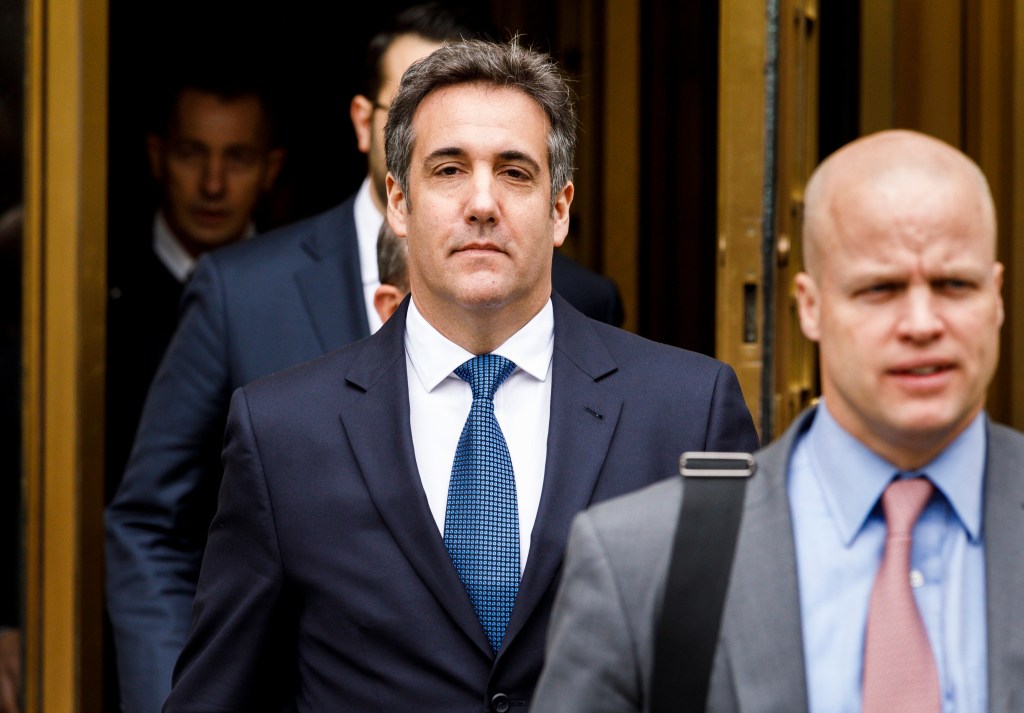 Why does this matter for Cohen? For starters, optics.

Davis is sensitive to how his “bad-guy” clients look, something he acknowledged to his friend Hillary Clinton in 2010 in what the Weekly Standard called “D.C.’s most cringe-inducing document ever.” Davis asked Clinton, his old Yale Law School classmate, to speak to a reporter on his behalf and then changed his mind the following morning when he realized her name would appear in the same piece with his clients at the time:

As soon as I wrote last email, I reverted to my old role as your crisis manager and worrier about you, read the word “optics” I suddenly felt – oops

I am registered under FARA [the Foreign Agents Registration Act] for one or more foreign governments or businesses. I don’t think it would look right. I want to avoid any even slight chance of misperception.

So let’s not chance it.

How can I describe what a great friend you are….?

Beyond mere optics, credibility matters, too. “My credibility is the only thing I have,” Davis once told the New York Times in an article that described him as a “front man for the dark side.” It didn’t help when Davis backtracked on his claims that Cohen had information that suggested Trump was aware of Russia’s efforts to undermine Hillary Clinton’s campaign. And emails released by the U.S. State Department show that during Davis’ days as a representative of Equatorial Guinea and Ivory Coast, his credibility was in short supply when he needed it most. Told that Davis had written a letter resigning as a representative of Ivory Coast, Phillip Carter, the U.S. ambassador to the West African nation, wrote in an email “I wonder if this is true…”

Davis’ client roster puts him in the same league as Paul Manafort, Trump’s former campaign chairman who also made a living representing dictators and Ukrainian oligarchs. Perhaps it’s not a surprise that Manafort, who was convicted last week on eight counts, also did business with Firtash. In 2008, while Manafort was working in Ukraine for the pro-Russian president Viktor Yanukovych, Firtash’s company Group DF agreed to commit $112 million to Manafort’s vision for “Bulgari Tower,” a $1.5 billion skyscraper project in midtown Manhattan on the corner of Park Avenue and 56th Street, said to be one of the most valuable development sites in North America. The tower deal later collapsed, but not before Firtash wired in a $25 million deposit from Raiffeisen Zentralbank Österreich AG, an Austrian bank that U.S. officials believed served as a Mogilevich front. Andrey Kozlov, a deputy chairman of the Russian central bank, was gunned down in 2006 after he blew the whistle on large amounts of rubles that were being laundered through Raiffeisen. (Raiffeisen also provided a $310 million construction loan to finance Trump’s tower in Toronto.) In a federal lawsuit filed in New York, Yulia Tymoshenko, a former prime minister of Ukraine, claimed that Firtash was laundering proceeds from sales of natural gas through Manhattan real estate.

Firtash, a former tomato grower and truck driver, rose from obscurity to become one of Ukraine’s richest men through his deal with Gazprom, the natural gas giant controlled by the Kremlin. In 2006, Gazprom gave Firtash a monopoly on all gas trades between Russia and Ukraine. The vehicle for this was yet another a murky company, RosUkrEnergo, half-owned by Gazprom and half-owned by Firtash and a minority partner. In a short time, RosUkrEnergo earned billions — some of which, U.S. government officials suspect, ended up in Mogilevich’s pockets. Notably, Firtash’s stake in the Swiss-registered RosUkrEnergo remained a secret for two years, hidden by the same Austrian bank that was used to wire in money for Manafort’s Manhattan tower venture. Prosecutors in Chicago have moved to seize RosUkrEnergo, along with Firtash’s other corporate holdings.

Firtash himself didn’t deny that he knew Mogilevich during a 2010 meeting with the U.S. ambassador to Ukraine, William Taylor. “Firtash acknowledged that he needed, and received, permission from Mogilevich when he established various  businesses, but he denied any close relationship to him,” Taylor wrote in a cable released by Wikileaks. Two of Firtash’s companies involved in the natural gas business had links — albeit indirect — to Mogilevich. (Mogilevich’s wife was a major shareholder in one company, while the other listed her as a director.) Firtash and Mogilevich also have shared the same Israeli lawyer, Zeev Gordon, to represent their business and personal interests.

Firtash’s associations with Mogilevich are what may have led to his indictment in Chicago as the leader of an international titanium-mining racket. Under Mueller, the FBI devoted tremendous resources to capturing Mogilevich, or at least, limiting his sphere of influence. The FBI permanently stationed agents in Budapest in 2005, which had been Mogilevich’s base of operations, and sent him scurrying off to Moscow. The FBI also targeted Mogilevich with a “threat fusion cell” staffed with FBI agents and officials from the National Security Agency. Reached for comment by Rolling Stone, the FBI declined to discuss the cell, acknowledging that an investigation is ongoing.

Seth Hettena is the author of Trump/Russia: A Definitive History published by Melville House.

Shortly after publication, Mr. Davis contacted Rolling Stone to request the following information be appended to this story:

On his representation of Mr. Firtash, Mr. Davis is a criminal defense attorney and co-counsel to two other prominent US criminal defense attorneys.  He chose to register under the Foreign Agents Registration Act, although he did not represent a foreign government or political party, because as defense counsel he has been called upon to issue public statements to rebut false information or to update the public record with events in court.  Regarding Mr. Firtash, the latter has already publicly denied a quotation attributed to him that he needed permission from any Russian organized crime member or has ever had any business relationship with any such member.

On his representation of Equatorial Guinea in 2010, Mr. Davis cites the public and published praise of a speech Davis wrote for the president of Equatorial Guinea, and delivered publicly to a global media forum in Cape Town, South Africa, in June 2010, by Nobel-Prize winning religious leader South African Archbishop Desmond Tutu. Archbishop Tutu’s letter was and is  available on the Internet and publicly reported.  See  http://www.lannyjdavis.com/wp-content/uploads/2011/12/EG-letter-from-Desmund-Tutu.pdf   Here is a copy of the “comprehensive reform” speech Davis wrote and  delivered by the EG president that Archbishop Tutu publicly praised: http://www.lannyjdavis.com/wp-content/uploads/2011/12/EG-speech-written-for-the-President.pdf.

On Ivory Coast, despite a false innuendo by an ambassador to the contrary, it is a matter of public record Davis resigned from the representation of the Embassy of Ivory Coast in 10- days – see copy of his letter of resignation http://www.lannyjdavis.com/wp-content/uploads/2011/12/IC-Letter-of-resignation.pdf.  And Davis was publicly praised by a published statement by the official spokesperson of the U.S. State Department on January 1, 2011.  See State Department statement  — http://www.lannyjdavis.com/wp-content/uploads/2011/12/IC-PJ-Crowley-statement-thanking-Lanny.pdf   Here is an excerpt from that statement:  “Certainly, Lanny was helpful [in his Ivory Coast Embassy representation and work with the  U.S. State Department.] He did open another alternative channel of communication for us, and was providing the right advice to his client….Unfortunately, every indication is that his client wasn’t heeding his advice.”