Why Did John McCain Continue to Support War? - Rolling Stone
×
×

I was surprised to hear the great Stevie Wonder — the creator of the searing anti-war, anti-Vietnam song “Front Line” — paid tribute to John McCain in the middle of a concert this past weekend.

On one hand it made sense, as Wonder has always been about love and forgiveness, and he’s rarely had a bad word for anyone. But he is also a political voice, who sings passionately about America’s inability to reckon with its violent nature.

That 1983 song, “Front Line,” describes a phenomenon we don’t talk about much: Our unthinking worship of all things military, and our unparalleled ability to quickly forget military atrocities, so as to embrace the inevitable next invasion.

The “Front Line” protagonist is an African-American Vietnam vet, but Wonder might as well be singing about McCain:

Back in the world, the paper reads today
Another war is in the brewing…
They laugh and say quit braggin’ ’bout the war you should have never been in
But my mind is so brainwashed I’d probably go back and do it again.

McCain was not, generally speaking, a man of strong beliefs. One of the most honest things he ever said was that he didn’t run for president to enact reforms or out of some “grand sense of patriotism,” but simply because “it had become my ambition to be president.” If anything, he often seemed bored by domestic issues, and was even famous after a fashion for “reaching across the aisle” on matters like campaign finance.

But he did have one unshakeable conviction: Wherever America had a foreign policy problem, the solution was always to bomb the fuck out of someone.

Long before he became a symbol of anti-Trumpism (despite having contributed significantly to the Trump phenomenon by unleashing Sarah Palin on national politics in 2008), McCain defied the mainstream GOP to support Bill Clinton’s air strikes in Kosovo. McCain wanted to go even further to a ground invasion, if necessary.

People forget, but it was this episode that first elevated McCain to media-icon status as an elected official. “We’ve turned down more than we’ve accepted,” he said in 1999, speaking about interview requests. “Five times as much.” 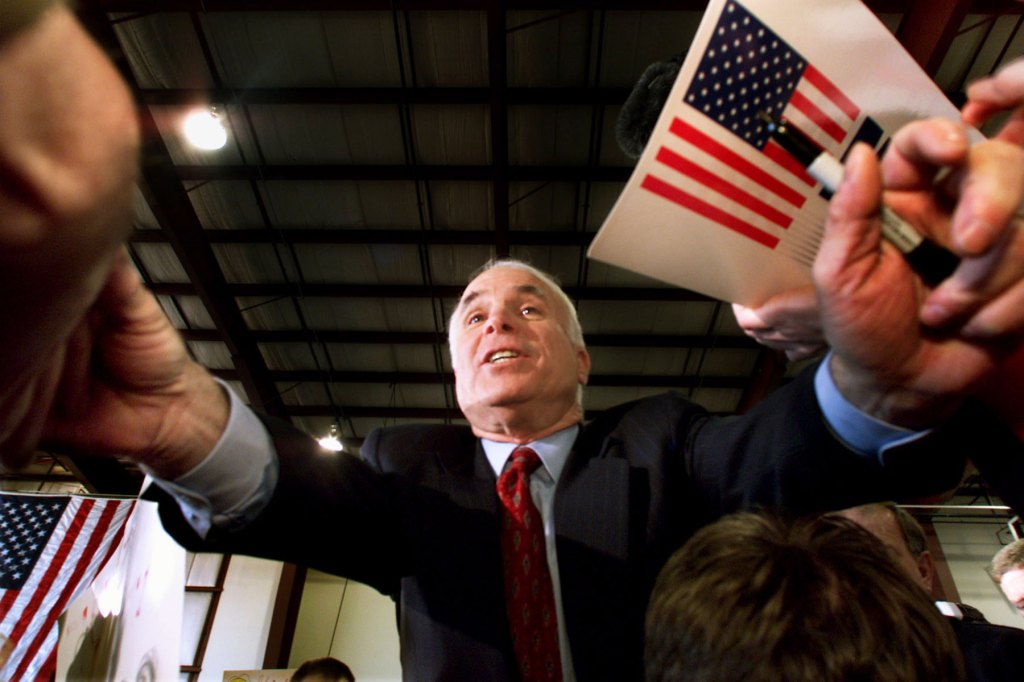 From that point on, he was the torchbearer for the purest bipartisan value that exists in Washington: military interventionism. He never saw an invasion he didn’t support, and it’s sadly fitting that the last piece of legislation to bear his name was a massive military spending hike that scored the rare trifecta of support from mainstream Democrats, Republicans and Donald Trump.

We leave smoldering ash-piles around the world, and instead of wondering why we’re hated in those places, we keep thinking it’s football and we’ll just call the right plays the next game. “We’ll get ‘em next time” became our official foreign policy, and McCain was long ago elevated as chief spokesperson.

McCain never changed his mind about Vietnam, in particular, and it colored his opinion of every war that followed. Here’s what McCain wrote in 2003, months into the invasion of Iraq:

We lost in Vietnam because we lost the will to fight, because we did not understand the nature of the war we were fighting and because we limited the tools at our disposal.

McCain added that Iraqis had less chance to “win” because they “do not enjoy the kind of sanctuary North Vietnam, Cambodia and Laos provided.”

Between 1963 and 1974, we dropped two million tons of ordnance on Laos — not North Vietnam, but Laos — which works out to “a planeload of bombs every eight minutes, 24 hours per day, for nine years.”

Add another 400,000 maimed and an additional 500,000 gruesome birth defects chalked up to the use of Agent Orange, and you start to get a sense of the scale of civilian suffering caused by our invasion of Indochina.

I bring this up because the McCain view of what happened there — that we “lost” in Vietnam only because we were “limited” to, say, 2 million tons of bombs and 580,000 air missions in places like Laos — continues to this day to be a mainstream belief.

That concept represents one side of the acceptable spectrum of opinion, in which the Ann Coulters of the world insist we are only ever held back by liberals and reporters and other such traitors, who were/are “rooting for the enemy.”

The other “mainstream” position on Vietnam today — the one taken by your average Democratic-leaning, Ken-Burns-watching, New York Times reader — is that we should have realized earlier that the war in Indochina was essentially “unwinnable,” and left earlier, so as to prevent the needless loss of life, particularly American life.

We’ve never gotten around to the view most of the rest of the world holds: America committed mass war crimes there, including “genocide, the use of forbidden weapons, maltreatment and killing of prisoners, violence and forceful movement of prisoners.”

McCain’s thinking never moved an inch in that direction. This is why he later refused to see the madness of entering a host of other countries, including Iraq.

In the early stages of the war there, he said, “There is no popular, anti-colonial insurgency in Iraq.” Despite McCain’s personal experience, he somehow failed to realize such a counter-insurgency would surely coalesce the longer we stayed in country, bombing civilian populations and pursuing inhumane strategies like the intentional destruction of civilian infrastructure.

In 2009, noting “we are not winning” in Afghanistan, McCain again said we needed to double down, not back out: “The scale of resources required to prevail will be enormous, and the timetable will be measured in years, not months.”

McCain’s famed solution for Iran was “that old Beach Boys song,” which he sang: “Bomb, bomb, bomb, bomb bomb Iran.” He was also in favor of intervention in Libya, Nigeria, Kosovo and Bosnia, among others. His take on Syria: “The only realistic [solution]… is with foreign air power.” When Trump finally did bomb Syria, he said it was a decision that was “eight years in the making.”

More recently, McCain voted to block a deal to end American involvement in the increasingly genocidal Saudi-led campaign in Yemen. Just as the images of dead and maimed Vietnamese children never changed minds about that war, the similar scenes emanating from Yemen have not penetrated Washington thought processes today.

McCain represented one of the central delusions of modern American culture: When we bomb a country, it’s not violence, but a benevolent expression of our dedication to human rights. And it’s not a civilian massacre if we do it from the air. If we kill 100+ Iraqi civilians dropping a 500-pound bomb, it’s not like we lined them up and shot them or anything.

We actually believe subject populations will thank us for “smart-bombing” them, i.e., for taking care to keep casualties of kids and the elderly to a respectable minimum, and/or for blowing up their access to electricity, clean water and medicine with maximum neatness and efficiency.

This delusion of appreciative victims is so strong that we’re even meant to understand this week that McCain is being mourned in Hanoi, the city he personally bombed.

Reporters may have been able to find a few flowers at his statue and one or two typically Buddhist expressions of forgiveness from Vietnamese passersby. But, come on. If we had any self-awareness at all, that’s a story we’d have left alone.

We can learn from the Vietnamese, and, in a spirit of forgiveness, stipulate that McCain was a family man and a respected colleague to those in the Senate.

What we can’t do is pretend that we don’t have a serious untreated addiction to war, one that survives McCain, who was maybe the ultimate symbol of the problem. The late senator was both a victim and a perpetuator of our national tragedy, which begins with an inability — still — to face our bloody past.