Sharon Lavigne knows some 30 people who have died in and around her tiny parish of St. James, Louisiana, in just the past five years. She buried two close friends this past weekend — one died of cancer, the other heart disease. Two of her brothers have cancer, and her boyfriend of 17 years died of COPD, a respiratory disease linked to air pollution and chemical fumes, in 2013. He was “vibrant and healthy,” she says, until a pipeline company expanded its operations next to his home, adding millions more gallons of crude oil storage tanks. “It was the pollution that killed him,” Lavigne says.

This is life in “Cancer Alley,” an 85-mile stretch along the banks of the Mississippi River between Baton Rouge and New Orleans, where industry leaders like ExxonMobil, Koch, and Shell operate about 150 fossil fuel and petrochemical facilities. Seven of the 10 census tracts with the highest cancer risk in the nation are found here. The exceptionally elevated  toxic air emissions released by the industry are linked to a host of ailments, from cancer to cardiovascular and respiratory disease to reproductive and developmental disorders. And in St. James, toxic facilities are increasingly concentrated in areas with the highest percentage of black and poor residents.

Greta Thunberg Warns Congress: You'll Have to Explain to Your Children Why You Didn't Act on Climate

It is the frontline of environmental racism. And it is poised to get worse.

Five generations of Lavigne’s family have lived in St. James, including most of her six children and 12 grandchildren. Not far from her home stands a historical marker heralding the 1872 founding of the Settlement of Freetown by former slaves, who began cultivating the land with sugarcane farms. Lavigne still lives on the original 40 acres purchased by her grandfather. The first petrochemical plant opened down the road when she was a student at St. James High. There are now 12 petrochemical plants within a 10-mile radius of her home. The air still fills with the sweet syrupy scent of candy when the sugarcane is harvested in the area, but now it’s often overwhelmed by acrid smells that irritate the eyes, sinuses, and skin.

“We are boxed in from all sides by plants, tank farms, and noisy railroad tracks,” says Lavigne. “We live in constant fear.”

Spurred by the national oil and gas fracking boom, a new wave of industry expansions and mega facilities is pushing into St. James. Since 2010, 333 new chemical manufacturing projects have been announced in the U.S., mostly along the Gulf Coast, according to the American Chemical Council. Much of the new infrastructure is dedicated to plastics – 99 percent of which is made from chemicals derived from oil or natural gas. The International Energy Agency predicts that in 2050, 50 percent of the growth in oil demand will be related to plastics production, overtaking that for passenger cars. St. James is also the endpoint of the Bayou Bridge pipeline, which became operational in June. It’s the final extension of the Dakota Access Pipeline, carrying fracked oil from North Dakota, the subject of years of mass protest before Trump ordered its completion within days of taking office in 2017. 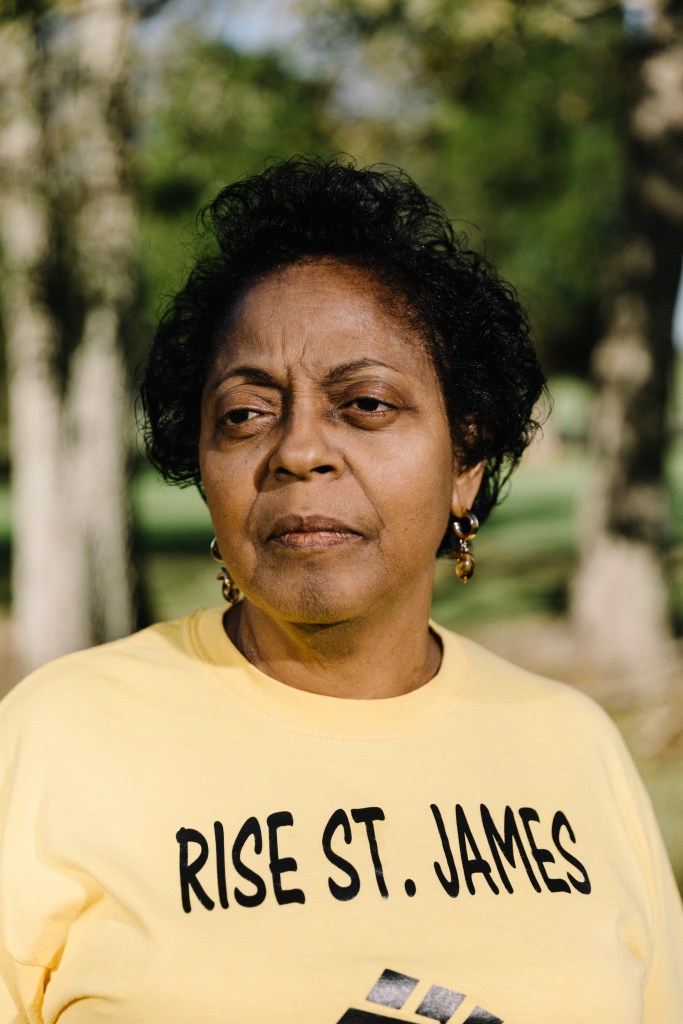 “They promised us jobs,” Lavigne says. “Instead they pollute us with these plants, like we’re not human beings, like we’re not even people. They’re killing us. And ­­­that is why I am fighting.”

In 2018, Lavigne, 67, founded RISE St. James, the lead organizer of a two-week-long protest, “The March Against Death Alley,” which culminates today in Baton Rouge. Along the way, she’s been joined by civil rights leader Reverend Dr. William J. Barber, II, the North Carolina pastor who relaunched Dr. Martin Luther King Jr.’s Poor People’s Campaign with co-chair Reverend Dr. Liz Theoharis. “The same land that held people captive through slavery is now holding people captive through this environmental injustice and devastation,” says Barber, who joined the march in St. James last week and gave a fiery speech in a sugarcane field set to give way to another petrochemical complex. “It is killing people by over-polluting them with toxins in their water and in their air. This is slavery of another kind.”

Carrying handmade signs declaring, “Stop the Genocide” and “Green Jobs. Green Infrastructure,” the protesters began their St. James march on Burton Street, sandwiched between long rows of massive white round holding tanks bearing millions of gallons of fossil fuels and petrochemicals. RISE member Myrtle Felton carried a poster of Geraldine Mayho, one of three fellow RISE members to have died in the past eight months. Within just four months in 2014, Felton’s husband, brother, sister-in-law and brother-in-law all died, she tells me, all from cancer except for her husband. She blames the industry and apologizes that it’s taken “so long for this community to rebel against these plants.”

“If we don’t march, these plants are just going to wipe us all out,” she says. “Nobody wanted to come forward before. I realized that somebody has to rise up if you want to survive.”

Lavigne never expected to become an activist. She spent 38 years as a special education teacher at St. James High. But in 2014, St. James Parish quietly pushed through a new land use plan, rezoning the 4th and 5th districts, where 64 and 90 percent of the residents are African American, respectively, to allow for more industrial development alongside residential. Soon after, St. James High was sold to China’s Yuhuang Chemical Inc. With majority owner and operator, Koch Methanol (a subsidiary of Koch Industries), Yuhuang now uses the building as an office while constructing what will be the largest production facility in the nation for Methanol, an oil and gas byproduct used in plastics. Lavigne only learned of the sale after she and her follow teachers and over 600 students were forced out and sent 10 miles away to a new school in another district.

Then, in 2018, Lavigne learned of a proposed plan to build a massive new $9.4 billion petrochemical complex within a mile and a half of her home. She began attending meetings, learning about Formosa Petrochemical Corporation’s so-called “Sunshine Project”, among other new plants. Composed of 14 separate facilities, the Formosa operation would be one of the largest Ethylene plants in the world, another plastic feedstock operation. It would double the amount of toxic chemicals currently being released into St. James’ air. And the Environmental Integrity Project found that among a list of 219 currently proposed oil and gas projects in the U.S., the Formosa plant would release the most carbon dioxide, by a wide margin. At 13.6 million tons of emissions per year, it’s the equivalent of three coal-fired power plants, says Earthjustice attorney Corinne Van Dalen.

“It is staggering,” Van Dalen says. “This is a massive operation, and the conversion by these giant crackers creates tons of greenhouse gases, as do the plants generating their electricity, greatly worsening the climate crisis. The government is courting and just greenlighting these facilities without any real appreciation of what they’re allowing into their community just over one mile from an elementary school.”

In a statement to Rolling Stone, Formosa said the facility would “meet all state and federal standards” and that “modeling demonstrates that Formosa’s emissions will have predicted ambient concentrations below the state and federal standards.” Formosa also said the site was selected “for its remoteness from residential areas, regardless of racial demographics” and that “census data for a one mile area surrounding the center point of the site shows that the population within a one-mile radius is zero.” 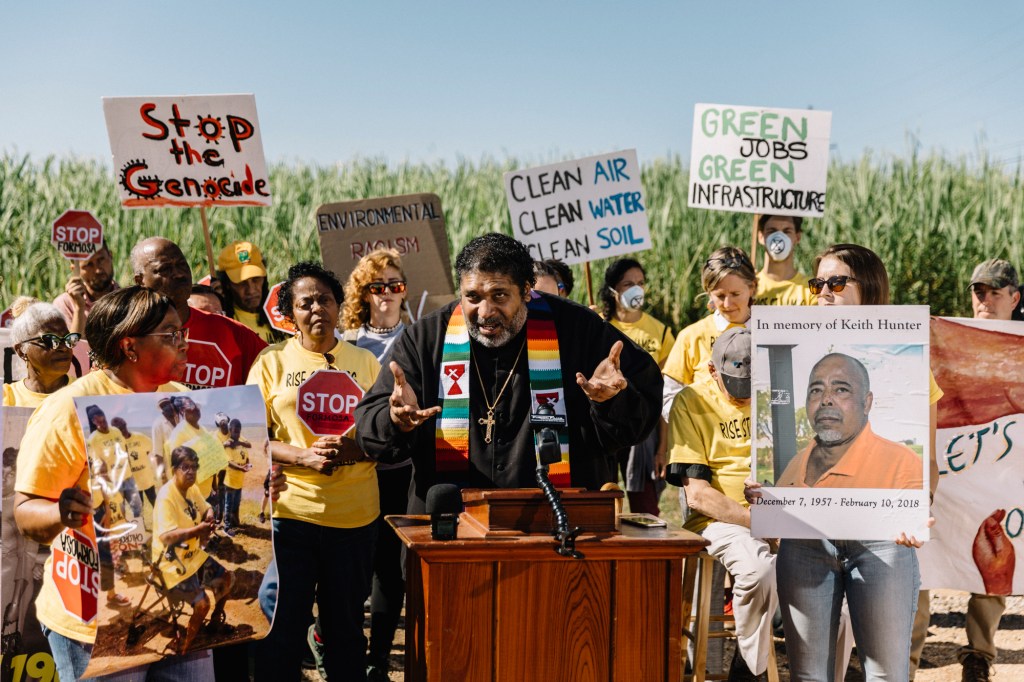 According to EPA data, Formosa’s Baton Rouge plant has been in violation of the Clean Air Act every quarter since 2009 and in violation of the Resource Conservation and Recovery Act every quarter since 2004. And, earlier this month, Formosa agreed to pay $50 million to settle a lawsuit over federal Clean Water Act violations at its Texas plant. The agreement is the largest ever settlement of Clean Water Act suit filed by private individuals.

Lavigne returned home from the Formosa meetings depressed and would stay up in bed at night crying. “Nobody said, ‘let’s stop them!’” she recounts in anger. “Why should I leave my land? It took years for my grandfather to pay for this land. Why should I let those monsters come in here and destroy what we built up here?”

So she gathered a group of friends in the garage of her home. Over gumbo, they formed RISE St. James to take on the industry. Thirty years ago, the Great Louisiana Toxics March helped first bring attention to Cancer Alley. And in 1996, Lavigne’s cousin Emelda West led a grassroots campaign to stop construction of a planned petrochemical facility in St. James by the Shintech corporation. A 2001 Lifetime TV movie, Taking Our Town Back, chronicled West’s success. Still, both the victory and the activism behind it are rare here.

Anne Rolfes of the Louisiana Bucket Brigade, a nonprofit environmental justice organization, points to the severe industry-capture at all levels of government in the state, making victories exceptional and leading many to conclude that resistance is futile. The locating of facilities in the most marginalized communities, many of which are also often dependent on government services, adds to the fear of taking action. The communities are also small, making anonymity impossible.

RISE St. James is hoping to change that. It is still a small all-volunteer group, but it’s gaining momentum. Last November they held their first protest, in front of the Fifth Ward Elementary School near where Formosa plans to build. In September, they submitted a letter to the Parish Council demanding a full moratorium on any new “petrochemical facilities and infrastructure, including pipelines” anywhere in the parish. They’re confronting the industry with a series of legal challenges led by organizations including Tulane Environmental Law Clinic, Center for Constitutional Rights, Earthjustice, and the Center for Biological Diversity. Lavigne was also featured this year in the film The Women of Cancer Alley, and she and fellow RISE member Barbara Washington spoke in June at the Congressional Convening on Environmental Justice in Washington, D.C.

Lavigne says they’ve already scored a highly unlikely victory: helping to force the Chinese company Wanhua Chemical Group to abandon its plans for a $1.85 billion petrochemical plant in St James. “It didn’t even take nine months for that plant to leave because of the noise we made,” Lavigne says, citing both legal victories and public protest. She concedes that cost increases due to Trump’s trade war with China impacted the company’s decision. Nonetheless, she argues, “That was our first win! The next big win is going to be Formosa.” 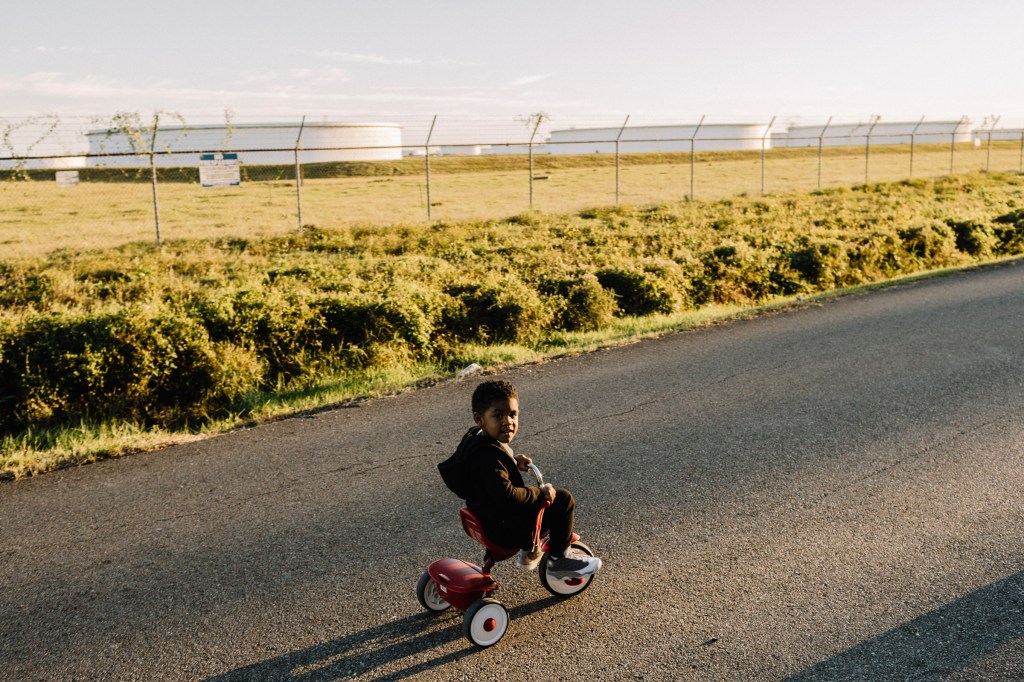 “There’s incredible leadership in St. James right now,” says Rolfes. “It’s the strongest organizing I’ve seen there in 20 years. It’s a response to this onslaught of these new operations, and they’re helped by the expanding robustness of the climate justice movement.”

Last month, RISE members went to New Orleans to participate in the Global Climate Strike inspired by Swedish teenager Greta Thunberg, during which some 7.6 million people took to the streets worldwide demanding action on the climate.

In turn, environmental groups like Sierra Club, 350 New Orleans, and Extinction Rebellion came out to join the “March Against Death Alley.” “More attention is coming to St. James,” Lavigne says. “More people are coming on board. I feel like we’re not completely alone, and I can see victory.”