The private jets have departed from Glasgow, shuttling their VIP passengers home from the annual UN Climate Summit (COP26) on thousands of gallons of jet fuel. Now, the diplomats hunker down in Scotland’s capital of industry, parsing through the promises made and seeing what might stick, while the rest of us are left to hope and pray that something actually will.

For Kyle Meyaard-Schaap, that prayer happens quite literally. As vice president of the Evangelical Environmental Network, he helps helm what he realizes may be one of the most head-scratching movements in modern history. White evangelicalism has come to be seen as almost synonymous with climate change denial, making Meynaard-Schaaps’ activism — on the surface, at least — no less incongruous than taking a private jet to a climate conference. According to a 2020 Pew Research Center poll, 62 percent of non-religious adults believe that climate change is happening because of human activity, while only 24 percent of white evangelical Protestants do. “As a Christian working on climate issues, I have received significant pushback,” Meyaard-Schaap has told me.

Yet he believes that caring for the climate is exactly what Christians are called to do — not in spite of their faith, but because of it. On Saturday, at 6 p.m. GMT , Meyaard-Schaap helped lead roughly 500 Christians in 30 locations around the globe (from Singapore to Santa Barbara to the Democratic Republic of Congo) in a simultaneous candlelight vigil to, as the literature states, “pray, sing, and reflect on what it means to be Christ-followers in the age of climate change.”

Can you tell me about the idea behind the vigil?
Baked into the Paris Agreement is what’s called a five-year stocktake. That means that every five years countries are going to come and bring new commitments to the table based on the science, based on where we’re headed. That’s why this [COP] has expectations, because we’re going to get a really good sense coming out of it of where the world is headed in terms of commitments that countries are making. So we’re in this moment where we thought this was a politically important COP that’s going to get a lot of coverage, and we want to help Christians understand why it should matter to them and also give them something concrete to do in the midst of this moment. The idea for a climate vigil took shape, and it’s as much about prayer as it is about mobilizing communities to act. We hope that vigils keep happening after COP so that communities are coming back to the space of prayer on a regular basis and then being sent out from that space into their communities to act, whether it’s at the city council level, whether it’s in their own neighborhood, building a community garden, advocating with their members of Congress. We’re hoping that the climate vigil will be the space where people gather to pray and are therefore empowered to go out and take action.

Why should Christians care about climate change if they think Jesus is coming back anyway?
A good question. I think scripture supports the idea that God loves and cares for God’s creation. Genesis 2:15 says that the first command God gives to humans is to serve and protect creation. The Psalms attest over and over that God takes delight in creation, that creation tells us something about God. There’s always been this this tendency within Christianity to de-emphasize the material world, the importance of matter and creation. In my opinion, that’s much more the influence of Greek philosophy than it is of the actual teachings of scripture, which are that God loves creation, God is intimately involved with God’s creation, and God has a good future in store for it. So if that’s the story that Christians inhabit, why wouldn’t we live like we believe that? Why wouldn’t we live like that’s true?

If there’s scriptural basis, why would any group of Christians come out against climate activism or, as you’ve called it, “creation care”?
A few reasons that I’ve perceived. One is a tendency among all of us, Christian or otherwise, to put our political identity above other identities. I think there are some Christians who, at least in practice, are more committed to partisan orthodoxy than biblical or theological orthodoxy, and their partisan orthodoxy tells them that environmentalism is a power grab, it’s a way of exerting control over them and their lives, it is dangerous for Christians because it too easily bleeds into Earth worship. And there’s a really good historical reason for that because for the last several decades, billions of dollars have been poured into a misinformation campaign by the financial industry to convince a subset of the American population—and disproportionately white evangelical Christians; there are studies that show this—that the science of climate change is not settled, that it’s a dangerous power grab that is anti-Christian. So there have been really powerful forces aligned against a subset of Christians understanding the scriptural basis for caring for creation. And that has had a profound effect on a lot of Christians’ perception of things like climate change and environmental protection.

Do you think it’s fair that the white evangelical Christian demographic is seen by many as standing in the way of climate action, that this group is often blamed for why not enough is being done?
Christians aren’t a monolith. White evangelicals aren’t either. It’s a group with varied commitments, different values, different ways of interpreting scripture. I also don’t want to paint every Christian with whom I may disagree as someone who’s been co-opted by ExxonMobil, but it is hard to get around the fact that studies and polls show that white evangelicals, right along with white Catholics, are some of the most resistant to the science of climate change, and the most skeptical of the science of climate change, and the most resistant to proposed solutions. I think that tells us a whole lot that white Catholics are kind of right there with white evangelicals. I think certainly something that has to do with race, a perceived loss of power and social status, and climate action being cast as kind of this exercise in a reallocation of social power that’s somehow more threatening to white people than others. So it’s an interplay of racial identity, of partisan and political and ideological identity—and of religious identity. But I think when the polls are showing that white evangelicals are so resistant, I think it’s less because their faith is driving that and more because their ideology is driving that. 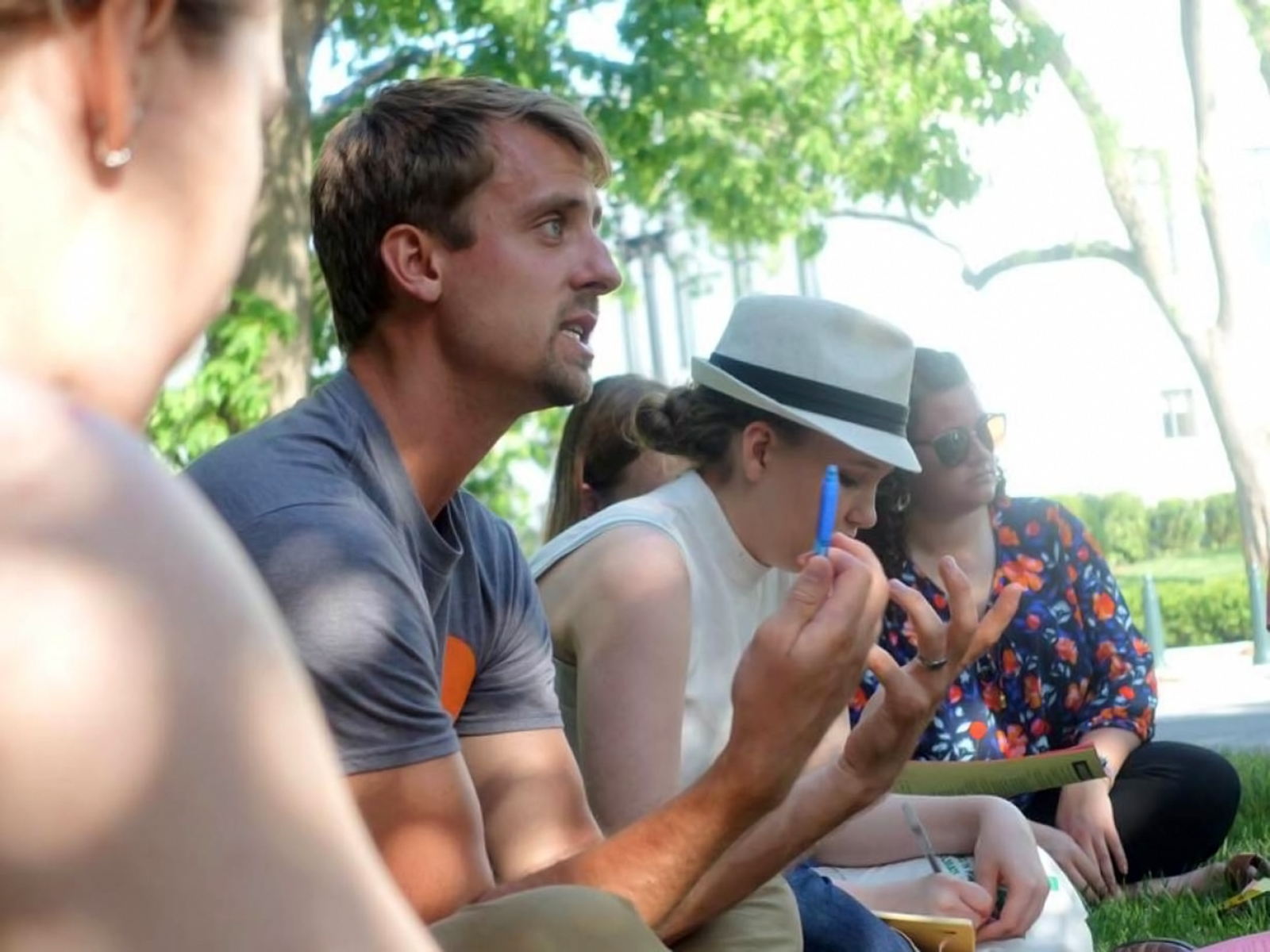 Do you feel like there has been a shift among young white evangelicals kind of breaking away from what older white evangelicals think when it comes to climate change? And if so, why do you think that shift is happening?
Yeah, I absolutely think that shift is happening and there’s some preliminary data to prove it. I mean, I think a lot of things are driving that. One is that climate change is not theoretical for young people. We’re looking at the predictions from the IPCC saying that if we don’t halve emissions by 2030, we’re going to start seeing catastrophic climate impacts. I’m going to be 41 in 2030. My son is going to be 12. This isn’t theoretical anymore. It’s existential for young Christians, just like it’s existential for young people everywhere in a way that it hasn’t been for our parents or grandparents.

I think another reason is that Millennials and Generation Z in particular as a cohort really have had kind of a reaction against the forever wars that cast their shadows over our childhood — this kind of imperialistic American footprint that really felt like it walked all over a lot of people — and the financial meltdown that devastated millions of poor people and then left financiers richer than ever. There’s just been a kind of a generational revolt against a lot of the inequities baked into our global system, and climate change is kind of the king of them all. When you look at the ways that climate change is disproportionately harming poor people who have contributed the least to the problem and have the fewest resources to adapt, I think our generations are more sensitized to those injustices and are more motivated to do something about it.

A line from the video you [showed] during the vigil states that sin has environmental consequences. Can you talk a little bit more about that?
We live interconnected lives. Scripture is very clear—and I think it is obvious to anybody who lives in the world—that sin has consequences, not just for the person committing the sin. Our actions create worlds for ourselves and for each other. When we act toward the creation in a way that is uncaring, that is exploitative and extractive, then it leads to injustice done against creation and against humans that all depend on that creation for their survival. It means mountaintop removal is allowed to happen where we harvest cheap coal by blowing up the tops of mountains and in so doing, poison the water supply of people living in the hollers next door so that 11-year-old girls are contracting ovarian cancer because they’re drinking arsenic and selenium in their drinking water. The individualism in American thinking can kind of separate us from each other and from the creation. But scripture is pretty clear that we’re all more interconnected than we might want to think and that everything we do has implications for everyone and everything around us.

Do you feel like what you’re doing is in any way an uphill battle? Or do you feel like the tides are kind of turning in your favor?
It feels like it’s been an uphill battle for a long time, and it feels like we’re cresting that hill. Five or 10 years ago, we would get a lot more coordinated resistance to what we’re doing from people who we know are getting funding from third-party think tanks who are funneling money from the fossil fuel industry into these efforts. A lot of that infrastructure has gone quiet. Maybe they’re holding their fire. Maybe they’re directing it their ire elsewhere. I don’t know. But it does feel like we’re making progress.

On the eve of this vigil, what is your call to Christians when it comes to climate activism?
When it comes to climate change, a lot of us are kind of stuck in this death spiral of despair, hoping to generate enough willpower to get out and do something. We know that hope does not lead to action, action leads to hope. We have to take action if we’re going to feel hopeful.

We’re not doing this climate vigil and we’re not doing anything we do on climate change because we’re Democrats or Republicans. We’re not doing it because we’re environmentalists — a lot of us don’t even identify that way. We’re doing it because we’re Christians. And when we look at Jesus’ commands—love God and love our neighbor—and then we look at what climate change is doing to God’s creation and to the people that God loves, we don’t know how not to respond. We don’t know what to do but respond. So we’re really just trying to follow Jesus in the 21st century. We think this is part of what that means.