Is Michael Flynn the First Domino to Fall in Kremlingate? - Rolling Stone
×

Donald Trump’s national security advisor, Michael Flynn, has resigned in disgrace after barely three weeks on the job. The departure comes in the wake of deeply sourced Washington Post reporting, revealing that – prior to the change in administrations – Flynn had engaged in illicit, back-channel communications with Russian Ambassador Sergey Kislyak, discussing the future of new sanctions that President Obama was imposing to punish Russia for its alleged interference in favor of Trump’s election.

Flynn’s exit is good for America, marking the departure of the most openly bigoted member of Trump’s inner circle; the former general had given a speech blasting Islam as a “malignant cancer” and infamously tweeted that “Fear of Muslims is RATIONAL.” Our democracy is a bit safer with this chaotic individual – Flynn was previously ousted as the head the Defense Intelligence Agency and led a chant of “Lock Her Up!” at Trump’s convention in Cleveland – far from the levers of power.

But Flynn’s departure resolves nothing about Kremlingate – shorthand for the cloud of Russian influence that has darkened the election of Donald Trump and the conduct of his new administration. Flynn’s toppling only raises more – and more troubling – questions. One domino is down. Others are almost certain to follow.

The official reason for Flynn’s departure doesn’t add up.

“I inadvertently briefed the Vice President Elect and others with incomplete information, regarding my phone calls with the Russian Ambassador,” Flynn said in his resignation statement, circulated Monday night by the White House. Cutting through the opaque language: The firing offense, in this version of events, is that Flynn lied to Mike Pence – who then went on Fox News Sunday in January to claim, “I talked to General Flynn … and the conversations that took place at that time were not in any way related to the new U.S. sanctions against Russia.” Pence added, “This is all a distraction.”

But Flynn’s lies to Pence have been known to the Trump White House for weeks – again, according to the Washington Post. In late January, acting Attorney General Sally Yates reportedly warned Trump’s White House counsel – based on classified U.S. intercepts of the Russian ambassador’s phone conversations – that Flynn’s description of events was false. The gap between what Flynn told the Russians, and what Flynn told Pence, could leave the national security advisor open to blackmail by Putin’s government, Yates warned.

Yates was soon fired by Trump – ostensibly for having “betrayed” the president by refusing to defend his immigration ban in court. Flynn, on the other hand, continued to serve at the apex of our national security apparatus, with what White House counselor Kellyanne Conway described even Monday as the “full confidence” of Trump. Over the weekend, Flynn stood by Trump’s side at the president’s Mar-a-Lago resort as the U.S. and Japan scrambled to respond to a missile-launch provocation by the North Koreans. It is plain that Flynn’s lies to Pence were not the firing offense – rather, their public airing made Flynn’s position untenable. 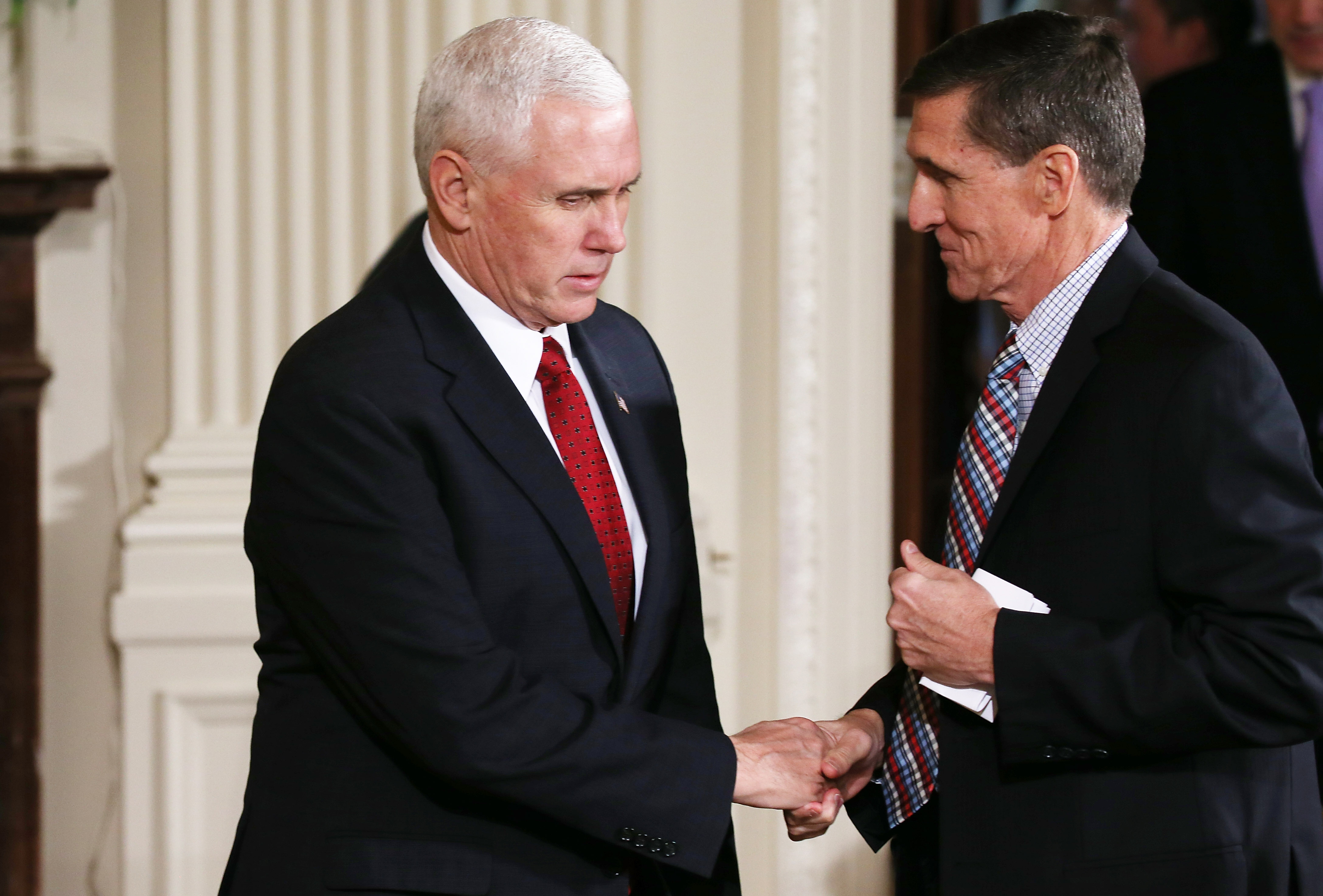 The open question is whether Flynn’s backchannel talks with the Russians were authorized by Trump himself while he was president-elect. South Carolina Sen. Lindsey Graham appeared on CNN Tuesday demanding answers. “I want to know, did Gen. Flynn do this by himself? Or was he directed by somebody to do it?” he asked. (Flynn reported to Trump, so the list of “somebodies” is short.)

Graham said he has not seen the transcript of the intercepted phone call, adding that “Congress needs to be informed about what actually Gen. Flynn said to the Russian ambassador about lifting sanctions.” Flynn’s call was a violation of protocol, at best; it also could have violated the Logan Act, which bars unauthorized citizens from negotiating with foreign governments “in relation to any disputes or controversies with the United States.”

Trump has not faced a direct question about his knowledge of Flynn’s communications with the regime of Vladimir Putin, which our president praises with obsequious consistency. But as president-elect, Trump was effusive in cheering the outcome of the illicit diplomacy of his deputy. Subsequent to Flynn’s conversation with the ambassador, Putin announced in late December that the Russian government would postpone any retaliation over the new sanctions until it had time to take the measure of the incoming Trump administration. “Great move on delay (by V. Putin),” Trump tweeted in response. “I always knew he was very smart!”

The Flynn resignation coincides with a new CNN report that parts of the infamous dossier prepared by retired a British intelligence officer – purporting to detail “well-developed conspiracy of cooperation” between Russia and the Trump campaign – have been corroborated by U.S. intelligence. (CNN did not reveal what portions had been confirmed, but cautioned they did not include the dossier’s “salacious allegations.”)

Trump had previously dismissed the dossier as “FAKE NEWS.” In an odd twist, he had leaned on Putin’s government for backup, tweeting, “Russia just said the unverified report paid for by political opponents is ‘A COMPLETE AND TOTAL FABRICATION, UTTER NONSENSE.’ Very unfair!”

The White House plainly hopes that cutting Flynn loose will push Kremlingate away from Trump and his administration. But dominoes tip both ways – and this scandal could quickly, even very quickly, cascade back toward the 45th president of the United States.