On Monday night in New York City, the lounge at the Regency bar hummed with a buzz native to the Upper East Side – guests tipping big on $20 vodka sodas, chomping down on cajun nuts, pretzels, and popcorn. A man who appeared to be in his early-20s returned from the cold weather outside to rejoin his guests at a table. “I saw that Trump lawyer upstairs before,” he could be heard saying. “He was complaining that they took his iPad and briefcase!”

It had already been a stressful few days for “that Trump lawyer,” Michael Cohen.

Last week, President Trump publicly denied knowing that Cohen had paid $130,000 to the adult film star Stormy Daniels in exchange for her silence about an alleged affair between herself and the president. Then, construction issues reportedly forced him to relocate to the Loews Regency hotel on Park Avenue, where he had been seen by a few guests and staff, coming and going from his nearby Rockefeller Center office. But on Monday morning, Cohen’s problems got exponentially worse.

The FBI vans first arrived around dawn, said Kat, who, along with other hotel guests interviewed for this story, requested that full names be withheld for privacy reasons. She saw the feds setting up Monday morning. The agents weren’t all wearing the usual emblazoned FBI vests, Kat said, but she could tell it was the authorities. “There were vans up and down this block,” Kat recalled Monday night, smoking a cigarette outside the hotel. “It’s New York,” she said, shrugging.

She wasn’t the only one who noticed the vans. Journalists and photographers appeared at the hotel later on Monday, after hearing that something was happening over at the Regency. But the news itself wouldn’t break for a few more hours: Cohen, President Trump’s lawyer, was the target of an FBI raid, and the Stormy Daniels story was now colliding with the Mueller investigation on Russian interference in the 2016 presidential election.

The hotel staff stayed mum, for the most part, after a day filled with FBI agents and cameras. Cohen reportedly returned to the building around 5 p.m. through the main lobby. Members of the media still present later in the night were forced to stay behind barricades erected out front, with a cop from the NYPD Community Affairs unit to monitor.

A couple passing by asked one photographer who it was they were waiting for. “Michael Cohen,” he replied. “Oh, Michael’s staying here?” the woman said, laughing out loud to the man as they continued down Park Avenue. “I had no idea!” 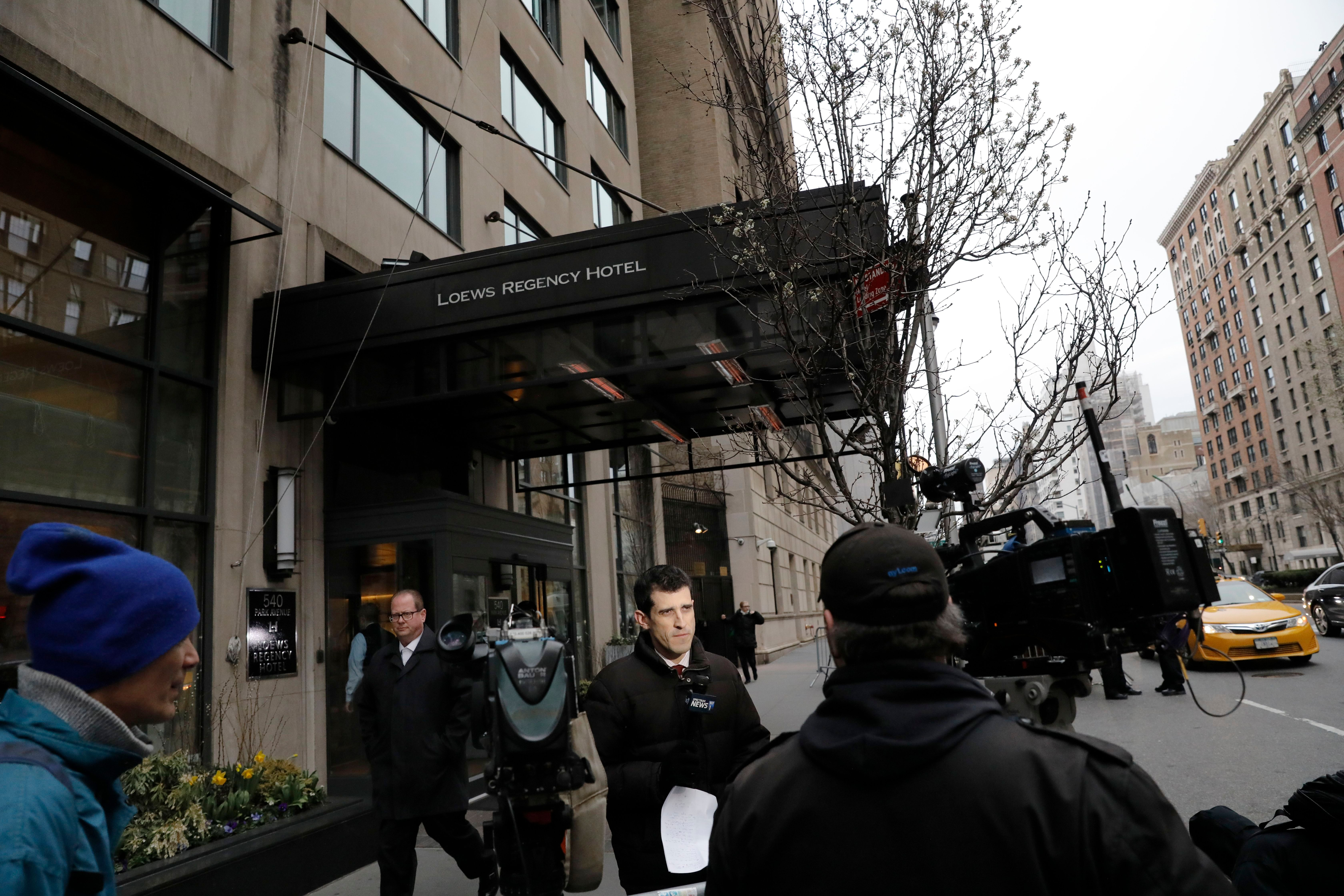 John, a guest who was visiting from Rhode Island, said that he had heard from hotel staff that Cohen had slipped out again Monday night via the rear exit – a parking garage that photographers watched with a keen eye. John noted that he had never seen Cohen himself, though he’d stayed at the Regency a handful of times, he said. “But when I got back here before, this place was mobbed. I don’t think the FBI likes Trump too much.”

Authorities had reportedly obtained a search warrant on evidence uncovered by the special counsel (apparently not related, however, to Russia) and with it, seized Cohen’s documents, emails and business records allegedly connected to the hush-money payment to Daniels, among other areas of interest. It was later reported that Cohen was under investigation for possible bank fraud and campaign finance violations. Stephen Ryan, Cohen’s lawyer, called the raid “completely inappropriate and unnecessary.”

On Monday evening, Trump fumed to reporters, labeling the raid an “attack on our country,” in a meeting that was supposed to be about a potential missile strike in Syria. White House staffers were apparently rattled by the news – as was their boss, who did not unequivocally deny that he may fire Mueller. To make matters even worse for the president, it became increasingly clear that it was his own appointees at the Justice Department and the U.S. Attorney’s office in the Southern District of New York who had signed off on the raid in the first place.

With hot Starbucks coffees in hand, the media would be out on 61st and Park well into the night, only to return first thing in the morning. After years of threatening reporters or anyone else with a story to tell about his boss, Cohen had found himself the subject of a classic Manhattan stakeout. It was now the task of The Daily News, The New York Post and local news affiliates to watch his whereabouts at all times, his mere existence contained to a hotel room, likely with room service.

As midnight approached, George, a hotel guest, said he had missed the din of activity earlier Monday morning, but saw the stretch of TV cameras outside the Regency as another part of his trip to New York. He and his friend, Ellie, had front row seats to the biggest news story in the country – “And we just got back from a Knicks game!”

President Trump shares his reaction to finding out his personal attorney Michael Cohen’s office was raided. Watch below.