Without googling, who is Neil Gorsuch?

A) The latest Trump cabinet nominee to have been revealed meeting with the Russian ambassador.
B) An angry Trump voter who believed he really would pass health insurance for all.
C) Someone who’s never been in your kitchen.
D) The likely next Supreme Court justice after the Republicans stole the seat that should have gone to an Obama nominee.

While C is true for most of us, the universally correct answer is D. You’d be forgiven for not knowing this, though, as Gorsuch has fallen out of the spotlight since the news of his nomination. In part, that’s because the Trump administration’s first several weeks have been an unrelenting fire hose of disaster. But also, the Democrats haven’t exactly made much of a fuss about him. As a result, Gorsuch has sailed through the early parts of the nomination process, meeting with more than 70 senators and getting very little pushback.

That could start to change on Monday, when Gorsuch’s confirmation hearings begin. Of course, this isn’t how anyone thought things would play out exactly one year ago, when President Obama nominated Merrick Garland to fill the Supreme Court seat left vacant by the late Antonin Scalia. However, through an audacious and historically unprecedented act of grand theft judiciary, the Republicans stole the seat out from under the Democrats and now have the chance to put a radical, young conservative on the Court for the next several decades.

What happens next week will provide much information about whether Gorsuch will actually become a justice. Every Supreme Court nominee has to appear before the Senate Judiciary Committee before being considered by the entire Senate. These televised hearings will last a few days, and then the committee will vote.

There are currently 11 Republicans and nine Democrats on the committee, so there’s no doubt Gorsuch will be approved. What we don’t know is 1) whether the Democrats ask him challenging questions, and 2) whether they’ll let him get away with not answering them. 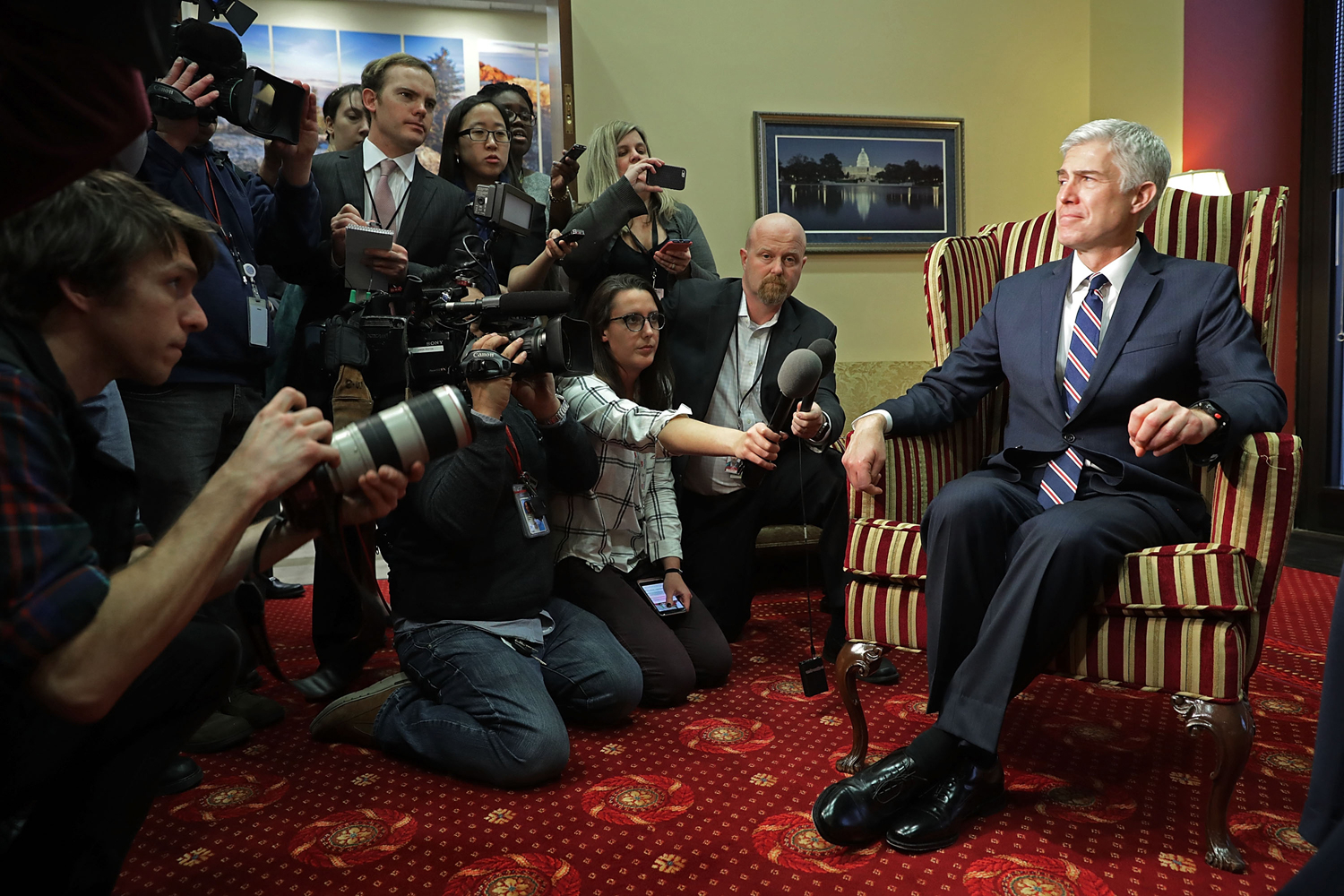 On the first point, if the Dems spend their time asking Gorsuch softball questions about his judicial philosophy and position on constitutional law, it will be a clear sign that they are not going to oppose his nomination. However, the Democrats could signal they’re willing to stand up to Gorsuch and Trump if they drill deep into particular aspects of his philosophy, such as whether he really believes the Constitution should be interpreted based on how it was originally understood. After all, a real originalist would have to take unpopular positions, such as that the Constitution does not protect women from discrimination and that states can ban interracial marriage. A principled originalist would also have to take positions that are opposite current conservative orthodoxy, such as that affirmative action is allowed and that corporations have no speech rights. The Democrats also could signal opposition by grilling Gorsuch about Trump attacking the judiciary, and whether he thinks the Senate’s inaction on Garland’s nomination was consistent with constitutional norms. If the Democrats press these issues, they will show that they take seriously the threat Gorsuch poses to the country and are willing to stand up to him.

So far the Democrats have not given much of an indication that they’ll do this. Some Democratic senators – such as Oregon’s Jeff Merkley – have spoken out forcefully against him, but most have not. Democratic Senate leader Chuck Schumer has waffled and now gone quiet about the issue.

But even if the Democrats do come out swinging, all of their efforts could be for naught if Gorsuch doesn’t answer their questions. And that’s a real concern: The age-old tradition in Supreme Court hearings is for nominees to do all they can to avoid saying anything of substance. When asked about a particular area of law or case the Supreme Court has decided, the stock answers are, “That case is established precedent,” “That issue may come before the Court, so I cannot comment at this time” and “Let me give you a lecture about this area of the law” – the equivalent of laughing in the face of the question-asker.

It’s up to the committee’s Democrats to make sure Gorsuch does not get away with dodging questions in this fashion. In fact, they shouldn’t ask him any questions that could be answered this way. Questions have to be pointed and require answers that don’t fall into the category of cases or issues the Court may decide. That may sound like a tall order, but it’s doable. Here’s a good list to get the Democrats started. And then, if Gorsuch tries to give one of the standard non-answers, they need to press for real answers and persist until he gives one.

Next week isn’t the only chance the Democrats have to stand up to Gorsuch – they can still filibuster his nomination when it comes before the full Senate – but the hearings are the most visible forum they’ll have for doing so. It’s hard to imagine Gorsuch coming off as anything but a respectable, smart and nice guy. But the Democrats can, if they want to, also make him look like the radical extremist he is.