The unwritten “no campaigning on 9/11” rule is a relatively recent one, established by George W. Bush and John Kerry in 2004 and observed by the major-party campaigns in every presidential election cycle since. Unlike some other campaign precedents – like, say, releasing one’s tax returns – Donald Trump plans to observe this one. On Sunday, both the Clinton and Trump camps have agreed to suspend ads and cease active campaigning for 24 hours out of respect for the victims and their families.

That’s probably for the best, especially given that during the primary, both candidates evoked the national tragedy in their own objectionable way. Trump made (and repeatedly defended) the debunked claim that Muslims in New Jersey were cheering from their rooftops as they watched the Twin Towers collapse. Hillary Clinton invoked the terrorist attacks when questioned by Democratic rival Bernie Sanders about her close ties to Wall Street.

Clinton and Trump, though, share a story that illustrates how each of them handled the aftermath of September 11th – a tragedy that has special resonance in a the city where both later headquartered their presidential campaigns. Clinton lobbied for substantial recovery funds, and when those funds were disbursed, Trump made sure he got in on the action.

On 9/11, Clinton had been New York’s junior senator for eight months. There are photos of her, ashen-faced, wrapped in a trench coat, surveying the damage at Ground Zero. The events that day would come to define her two terms in Congress, informing her votes on the the Iraq War and the PATRIOT Act, which dramatically expanded the government’s ability to conduct surveillance without warrants, among other things.

In the years that followed, she was instrumental in crafting legislation addressing health care needs for first responders and called hearings to discern whether the White House and EPA intentionally misled New Yorkers on the safety of the air quality at Ground Zero. But in the immediate days and weeks after the attacks, she spent her time spearheading, with fellow New York senator Chuck Schumer, a furious lobbying effort to get federal funding for recovery efforts.

In January 2002, four months after the attacks, Clinton and Schumer stood in the White House Rose Garden, where George W. Bush thanked them for their work as he signed into law a budget containing some $20 billion in dedicated funding for New York’s recovery. 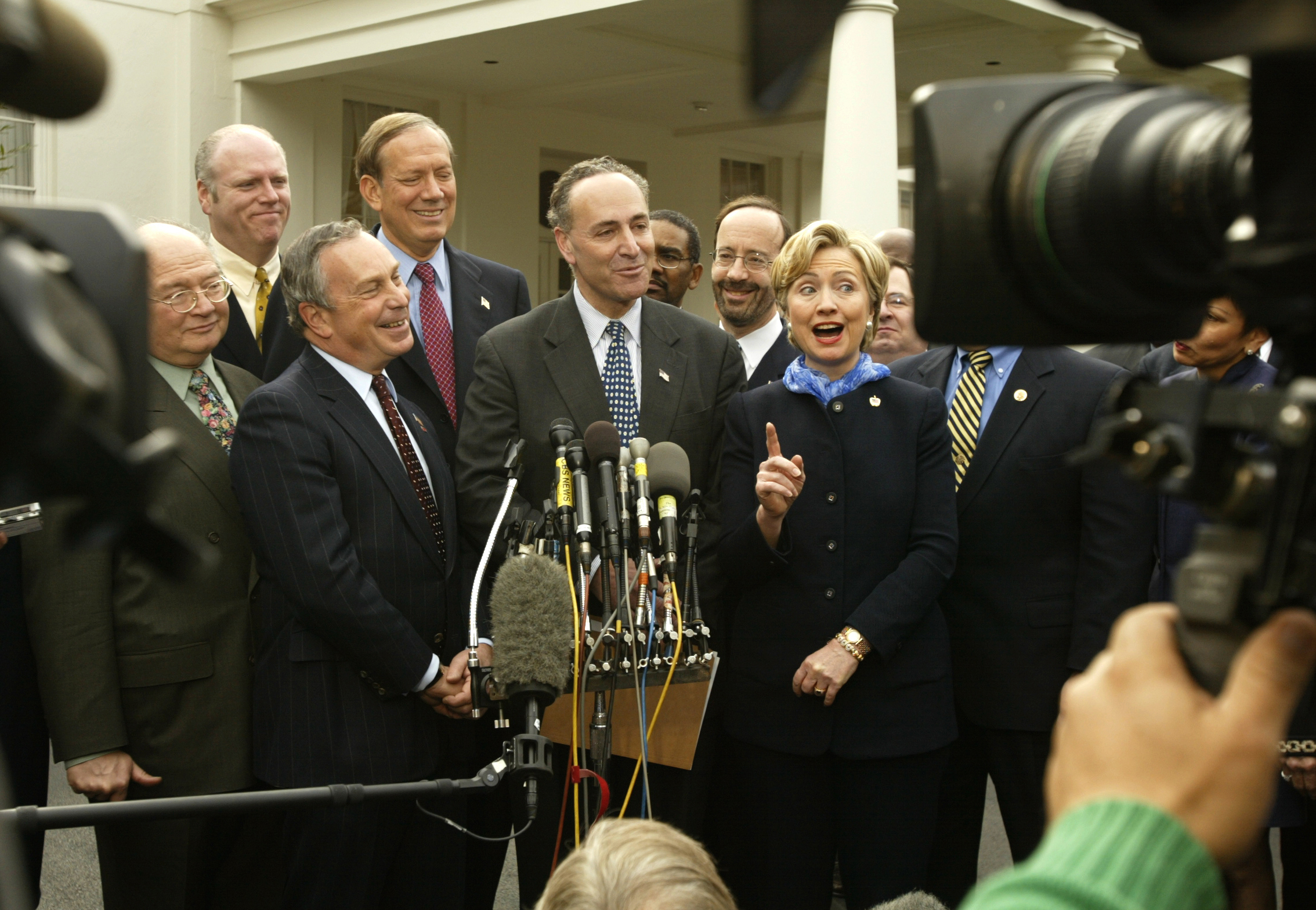 A not-insignificant chunk of that federal funding, $2 billion, was earmarked for distribution by the Lower Manhattan Development Corporation and the Empire State Development Corporation. About a quarter of that – some $500 million – was explicitly set aside for helping small businesses in the area recover. Among the 8,214 early recipients was 40 Wall Street LLC, the most valuable building in Donald Trump’s portfolio of properties, a skyscraper that sits less than a mile from Ground Zero. (An additional $350 million was later allocated to the same cause, bringing the total number of businesses impacted to more than 14,000.)

Trump applied for and accepted the money, despite the fact that – as he acknowledged in an interview with a German news show immediately after the attacks – the property “wasn’t, fortunately, affected by what happened to the World Trade Center.”

Technically, 40 Wall Street LLC (if not its parent company, the Trump Organization) did meet the criteria for the funds: It had fewer than 500 employees, and was located south of 14th Street. And, as the agency that administered the funds said, eligibility wasn’t necessarily determined based on damage incurred; rather, the goal was “to keep businesses and jobs from deserting the city and moving to other States or overseas.”

Still, Trump’s decision to take in recovery funds left some with a bad taste in their mouths. The New York Daily News ran an exposé on the subject in 2006, and earlier this year Rep. Jerrold Nadler, whose district includes Ground Zero, wrote an open letter to Trump demanding he return the money.

“In grabbing that money with both fists, you took it out of the pockets of small business owners in New York who were truly hurting,” Nadler wrote to Trump in May. “Your exploitation of our bravest and most generous citizens shows us all we need to know about what lies within your heart.”

In response, Trump said, according to The New York Times, “For many months, I allowed people to stay in the building, use the building and store things in the building …. I was happy to do it and to this day I am still being thanked for the many people I helped. The value of what I did was far greater than the money talked about.” (Trump did not respond to Rolling Stone‘s request for comment. The Clinton campaign declined to comment.)

The story is a kind of Rorschach test: Both Clinton and Trump supporters can find something to admire about their candidate. A Clinton voter will see a public servant who worked tirelessly to ensure her constituents were taken care of in the aftermath of a major tragedy. Those people will regard Donald Trump’s actions with the same disdain Nadler does.

But to Trump supporters, the story is an example of the real estate mogul getting the best possible deal for himself – just like the deals he promises to get Americans on trade and wages and taxes. Those same supporters might see in Clinton’s lobbying effort the kind of waste her critics have tried to tie her to in Haiti; sure, Clinton helped raise some of the $13 billion in international aid that flowed into the country after the devastating earthquake, but that money, some argue, wasn’t distributed as effectively as it should have been.

This story also illustrates that Trump and Clinton have, in a way, spent decades building the case for how they’d govern as president. In that sense, it doesn’t much matter if they campaign on 9/11, or at all until November 8th; everyone, save the handful of undecided voters, already sees what they want to see.