It’s quiet in the morning. The remains of a campfire smoulder beside the railroad; fog hangs low in narrow valleys people here call hollers; a bedsheet strung between the poles of an overturned tent flutters in the breeze. The bedsheet reads, “NO PAY WE STAY.”

It’s day 38 of a nonviolent blockade of a Harlan County, Kentucky railroad track. During the occupation, union miners have stood with non-union miners, transgender anarchists have built solidarity with Trump-voting Republicans, and a 100-year-old labor movement has found a new generation of working-class leaders fighting to keep the region’s wealth where it came from: in workers’ hands and in the foggy hollers of central Appalachia.

On July 1st, the nation’s sixth-largest coal company, Blackjewel LLC, declared bankruptcy without warning, leaving 1,700 employees out of work. Coal miners’ June 28th paychecks bounced, leaving many workers thousands of dollars in debt. Their final paychecks, which ought to have come on July 12th, never came.

Blackjewel miner Shane Smith, 29, learned he was out of work the day after the birth of his sixth child. “This is what fed our kids,” he says. “This has ruined us.”

On July 29th, a woman who lives near a Blackjewel prep plant noticed a train being loaded with coal. She sent a message to some Blackjewel workers, and soon enough Smith and four others were clambering onto the tracks to stop the trainful of $1.4 million worth of coal.

“If they can move this train, they can give us our money,” Smith told me when I first reported on the protest that afternoon for the Ohio Valley ReSource, a nonprofit journalism collaborative that’s been covering the blockade from day one.

Though other Blackjewel miners and community members stop by, there are usually fewer than a dozen people holding the line, a core crew sitting on lawn chairs parked on the tracks, reading the Harlan Enterprise, scrolling through Facebook and waving languidly at passing cars and trucks that honk in support. But the blockade has drawn reporters from as far away as Germany as it has put a spotlight on the struggling economy of central Appalachia and the debate about how to justly transition to a sustainable energy future.

A two-day hearing on Wednesday and Thursday this week will likely determine the fate of the blockaded coal. The Department of Labor has been arguing to a West Virginia bankruptcy judge that the coal was mined in violation of the Fair Labor Standards Act, and shouldn’t be moved until miners are paid.

Blackjewel’s attorneys have opposed that motion, saying in a recent court filing: “The Debtors are acutely aware of the hardship their inability to pay has caused their employees and are focused on doing everything possible to address and remedy the situation. … The fact remains, however, that the Debtors simply do not have the ability or financial wherewithal to satisfy their employees’ claims for Prepetition Wages at this time.”

The miners say they intend to stand firm whatever the outcome. “When I’m paid is when I’ll stand down,” says miner Bobby Sexton. “My family’s hungry, man, and I’m going to do whatever it takes to feed them. I’ll sit here till whenever.”

Blackjewel’s bankruptcy, though more chaotic than most, is just one of many recent shocks to the industry. Dozens of companies have gone under in the past decade, and fewer people are employed in coal now than were in the last year of the Obama administration.

Harlan County went 85 percent for Donald Trump in 2016 as voters turned out to support the candidate who promised to bring the coal industry back. Trump would have miners believe that it was Obama’s regulations on coal plants that caused the decline, but industry experts agree that market forces were actually behind the shift, as both natural gas and renewable energy sources have become cheaper in recent years.

A recent report found that there are 26 counties in the U.S. that are “coal-mining dependent.” The precipitous decline of the coal industry could cause a “death spiral” in these communities, says Adele Morris of the Brookings Institution, one of the report’s co-authors. The need to reduce carbon emissions from fossil fuels like coal and stall the climate crisis grows more urgent by the day, but the fate of coal has become a cultural wedge issue in the Trump era and the economic hardship caused by the industry’s demise is pushing workers further into the thrall of Republicans who block any meaningful legislation on climate. But the GOP also has a poor record of protecting workers’ rights.

Just recently, for example, Majority Leader Mitch McConnell, Kentucky’s powerful senior senator, drew criticism for spending only minutes with disabled coal miners who visited his D.C. office urging him to increase a tax on coal that supports health care expenses for roughly 25,000 disabled miners and their dependents in a skyrocketing black lung epidemic. Sen. McConnell failed to act to preserve the tax rate in 2018, sending the fund spiralling further into debt.

When politicians talk about coal country, it’s usually about “saving” or “developing” a region that has long been seen as stubbornly resistant to progress. Little attention is paid to the true cause of poverty here: the economic and political dominance of extractive industries that truck wealth out of the mountains and leave workers stranded when the market changes. 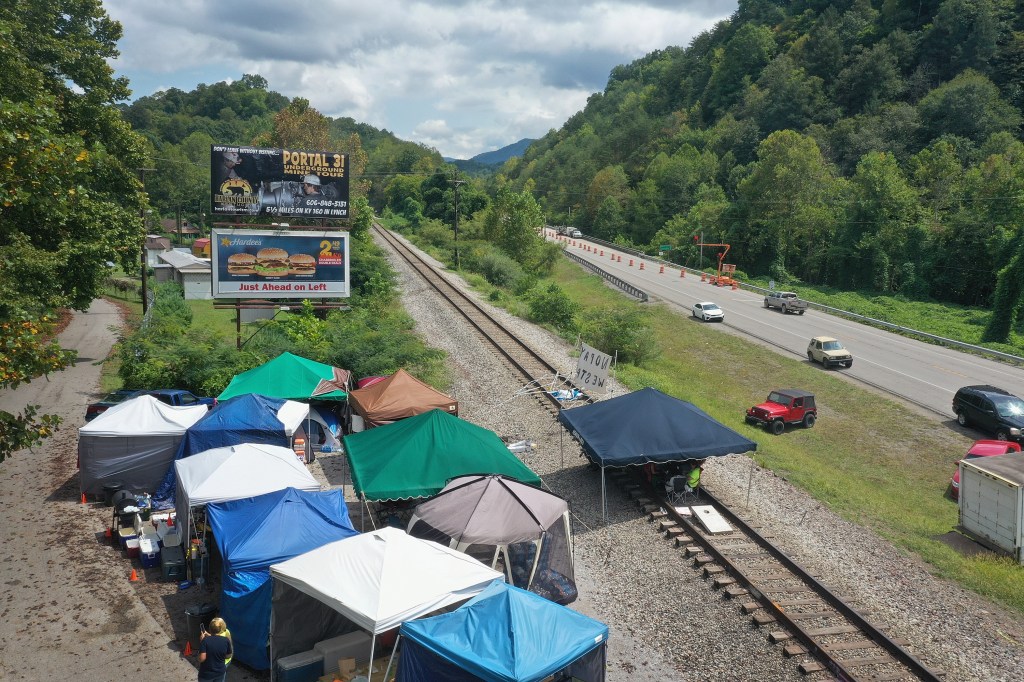 Unemployed Blackjewel coal miners man a blockade along the railroad tracks that lead to their old mine in Harlan County, Kentucky. When a few of the miners learned the company was shipping out a final load of coal by rail they decided to block the tracks to prevent the shipment from leaving the mine until they were paid their wages. The blockade, which is in its 37th day, has received an outpouring of support. Photo credit: Scott Olson/Getty Images

But they’ll also tell you about the stream by their house that runs orange with acid mine drainage, and the black lung disease that stole the breath of too many men. They’ll tell you that when everyone depends on coal jobs, whole communities live and die by the fate of the industry.

A rural county of 27,000, Harlan County’s average household income is about $29,000. Unemployment in 2017 was 9.4 percent, far above the national average. Miner Curtis Cress, 34, says towns that were bustling in his childhood are “footprints” of what they used to be.

“We’re in uncharted territory,” said Clark Williams-Derry, the director of energy finance for Sightline Institute, a nonprofit think tank. “We don’t really know what happens when the industry is shrinking so rapidly that we just see mines simply abandoned.” Williams-Derry said we can expect more coal bankruptcies, and more chaotic bankruptcies like Blackjewel’s, as companies scramble to shed debt.

As a result, companies aren’t paying into miners’ health care funds, environmental cleanup is going unfunded, and taxpayers may end up paying billions to remedy the damage the coal industry leaves behind. Because of the spotlight the month-long Blackjewel protest has drawn, local journalists discovered that no Kentucky coal company was in compliance with a law that would have helped miners get their rightful pay, and that Blackjewel owed millions to a miners’ health care fund.

Progressive Appalachians have long argued for a “just transition” — a shift from a single extractive industry to a more diverse, sustainable economy that benefits everyone, not just those at the top. That vision has for the first time appeared in the national political conversation in Rep. Alexandra Ocasio-Cortes’ rhetoric and presidential hopeful Sen. Bernie Sanders’ Green New Deal proposal, which provides the most comprehensive support for communities that are reliant on fossil fuel industries as the U.S. moves towards a sustainable energy future. (Sanders sent 18 pizzas to the blockade to show his support in mid-August.)

“Because of propaganda in Appalachia, it’s always about, ‘Well, do you support coal or do you not?’” says Lill, 29, a transgender activist from the county adjacent to Harlan who showed up on day two of the protest preaching a doctrine of mutual aid among working-class people. “And nobody wants to talk about how complicated it is, how maybe the same industry that allows you to feed your family also lays you off, breaks your back, causes you to get black lung.”

Lill, who uses gender-neutral they/them pronouns, quit their job as a server and, along with a small crew of transgender anarchists, set about marshaling the blockade into an organized labor camp. They helped set up a camp phone line, a solar shower, and a kitchen capable of feeding dozens. The anarchists, who spent 27 days on the tracks with the miners, brought up questions the miners hadn’t yet considered: Who are you going to call if this gets you arrested? Who’s going to bail you out?

“I didn’t know who they were at first, but I kind of got used to them,” says Sarah Kelly, 43, the wife of a Blackjewel miner. “We haven’t had the support [from our church] we thought we’d have out of all of this. You don’t never know where your help is going to come from. You don’t know who’s going to be preparing your meals.”

The Blackjewel miners were strangers to the vocabulary of lefty direct action, but the area has a strong history of labor activism. Harlan County once earned the moniker “Bloody Harlan” for the union wars that broke out in the 1930s. As workers fought for better pay and safer working conditions, coal companies colluded with local law enforcement to break down the strikers. The same revolutionary spirit surged in the 1974 Brookside strikes, which lasted 13 months and left two men shot, and one dead. 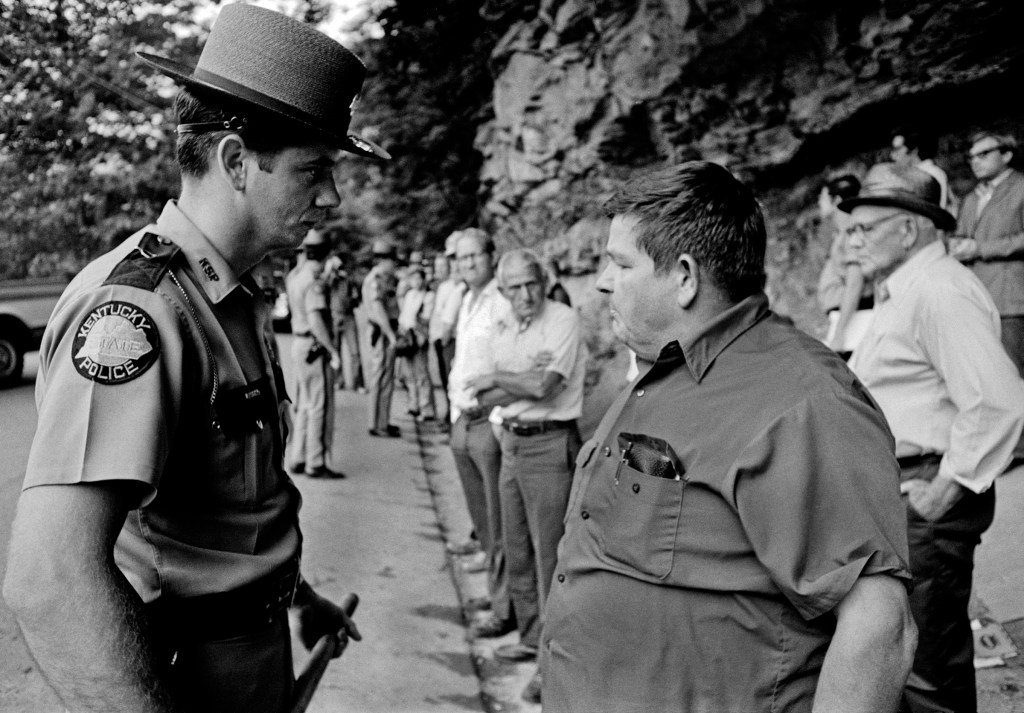 Outside the Highsplint mine in Harlan, County, KY in 1974, United Mineworkers of America (UMWA) strikers and supporters confront state police and strike breakers. Before the union won the right to an election, one miner was shot dead by company “security” while having a beer with friends. Photo credit: Robert Gumpert/Redux

“I remember the Bloody Harlan stories and all that, and all those picket lines, and I thought, man, that was some crazy times,” says Cress. “In a sense, it’s kind of awesome to be a part of it. I just hate that it had to be a mess like this in order to be a part of something like that.”

Perhaps the biggest transition some of the Blackjewel miners have made is that they’re seeing the writing on the wall — and talking openly about it. While some of them  have moved to Alabama to work in the coal mines there, others are looking to make bigger changes.

“If I knew for a fact that coal mining would last, I’d do it for the rest of my life,” says James Brown, 30. “But I’ve got three kids, a wife, a motorcycle, a truck. I’ve got to pay for them. My little boy asks me to take him to Disney World all the time, and I’m going to take the little bastard to Disney World.”

Since the bankruptcy, Brown has started a training program that could help him find work with a utility company. Miner Chris Rowe got a job as a trucker. David Pratt, Jr., whose father was also impacted by the Blackjewel bankruptcy, enrolled in nursing school.

“This has been a hard hit right here, on every one of us,” says Brown. “It’s really opened up a lot of eyes, to see [coal mining] is not going to last. We’re going to have to figure something else out.”

Brittany Patterson of the Ohio Valley Resource contributed reporting to this story.