“I think we need a word to describe people broadly satisfied with the status quo & skeptical of radical changes based on wild promises.”

Frum was responding to a move by Catalonia to seek independence from Spain. But he might as well have been talking about the electoral successes of Jeremy Corbyn’s Labour Party in Britain, which Frum also denounced last week.

Frum was so distressed by all this rejecting of the status quo going on that he proposed that those “broadly satisfied” folks band together to create a political coalition:

“I mean, there have to be a few of us, right? Maybe we could form a movement of some kind or form a political party with that word in it?”

The responses to Frum on social media were priceless. One tweeter suggested Frum could call his party the “ungressives.” Another humorous name proposal: the “Quo-nothings.”

Frum’s clarion call spoke to the almost total cluelessness of the D.C./punditoid class to which he belongs. (To be clear, though I’m a New Yorker, I also belong to this miserable group.)

Our media priesthood reacted with near-universal horror at the election in Britain. We panned the result in which Labour, led by the despised Corbyn, took 261 seats and won 40 percent of the vote, Labour’s largest share since hallowed third-way icon Tony Blair won 40.7 percent in 2001.

Corbyn’s strong showing came as a surprise to American readers, who were told repeatedly that Britain’s support for the unvarnished lefty would result in historic losses for liberalism.

The status quo line on Corbyn followed a path identical to the propaganda here at home about liberal politics. Whenever Washington pundits in either party talk about the progressive “base,” you can count on two themes appearing in the coverage.

One is that “progressive” voters make decisions based upon their hearts and not their heads, with passions rather than intellect. The second is that such voters consistently choose incorrectly when forced to choose between ideals and winning.

The New York Times perfectly summed up this take a few days after the Corbyn result, describing the reaction of the American left: “Democrats in Split-Screen. The Base Wants it All, The Party Wants to Win.”

This has long been the establishment line both here and in Britain. In the U.K., the once-revered Blair’s support among European progressives tumbled after he supported the Iraq War efforts of Frum’s former boss George Bush. Blair years ago warned that Corbyn was leading his party over a cliff toward “total annihilation.” 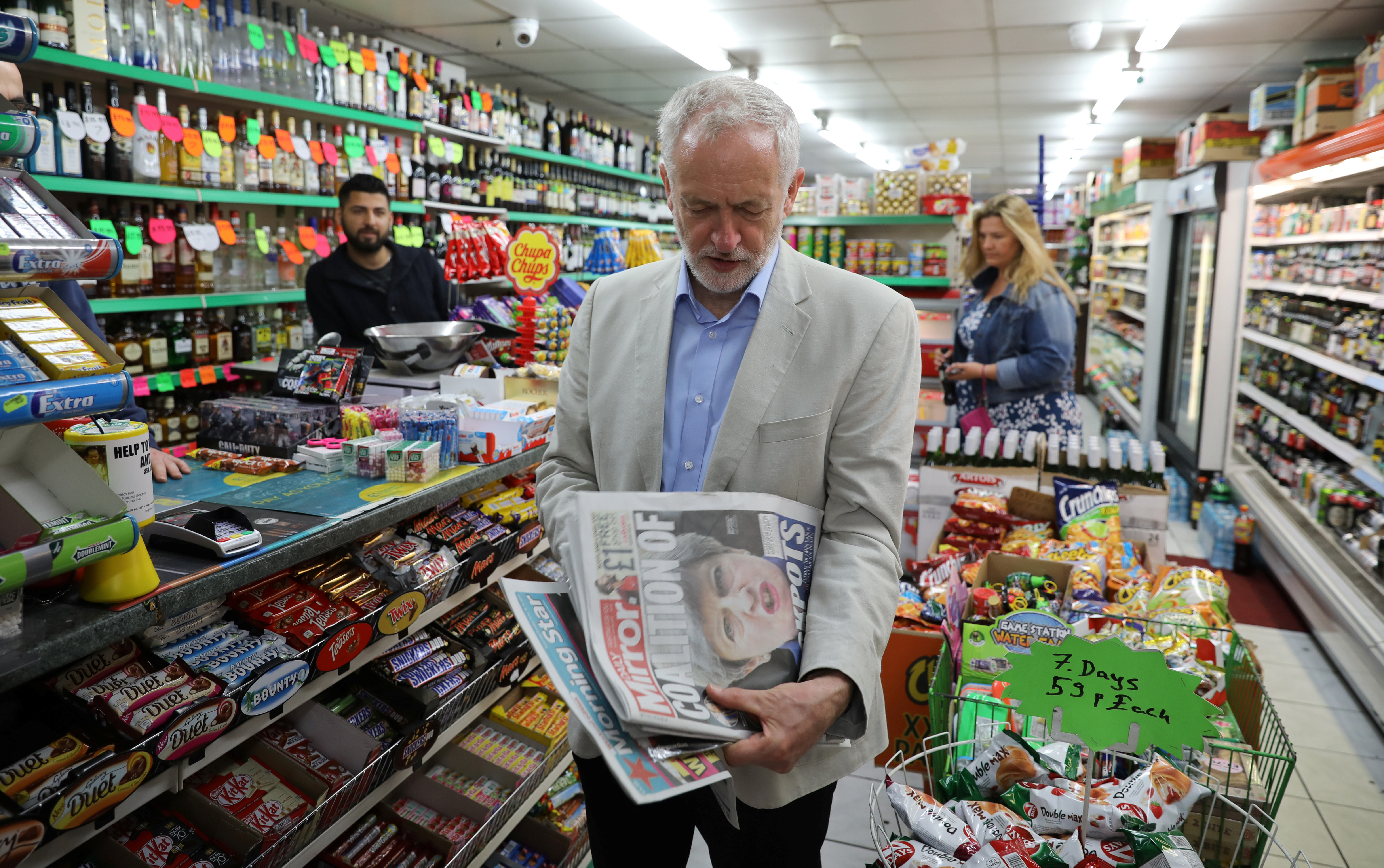 The former PM played a lurid riff on the heart-head propaganda line, telling Britons whose “heart is with Corbyn” to “get a transplant.”

In December, Barack Obama said he wasn’t worried about the “Corbynization” of American politics because “the Democratic Party has stayed pretty grounded in fact and reality.”

The idea that British liberals had failed the “wanting versus winning” test and elected to live in loserific “unreality” has been everywhere in our media for years.

“A cult is destroying a major liberal political party,” insisted CNN’s Michael Weiss. Eric Boehlert of Media Matters, a quasi-official weathervane of mainstream Democratic Party opinion, declared in January, “Corbyn has been a disaster for Labour.”

In April, the Washington Post ran a piece saying that swooningly “rigid” leftists in Britain would pay a high price for supporting a man in “cuckoo world.”

The idea that people who want expanded health care, reduced income inequality, fewer wars and more public services are “unrealistic” springs from an old deception in our politics.

For decades pundits and pols have been telling progressive voters they don’t have the juice to make real demands, and must make alliances with more “moderate” and presumably more numerous “centrists” in order to avoid becoming the subjects of right-wing monsters like Reagan/Bush/Bush/Trump.

Voters for decades were conned into thinking they were noisome minorities whose best path to influence is to make peace with the mightier “center,” which inevitably turns out to support military interventionism, fewer taxes for the rich, corporate deregulation and a ban on unrealistic “giveaway” proposals like free higher education. Those are the realistic, moderate, popular ideas, we’re told.

But it’s a Wizard of Oz trick, just like American politics in general. There is no numerically massive center behind the curtain. What there is instead is a tiny island of wealthy donors, surrounded by a protective ring of for-sale major-party politicians (read: employees) whose job it is to castigate too-demanding voters and preach realism.

Those pols do so with the aid of a bund of dependably alarmist sycophants in the commercial media, most of whom, whether they know it or not, technically inhabit the low end of the 1 percent and tend to be amazed that people out there are pissed off about stuff.

In the States, the centrist Oz has maintained its influence in large part thanks to another numerical deception. We’ve been taught that our political spectrum is an unbroken line moving from right to left, Republican to Democrat, and that the country is split in half between the two groups.

Propaganda about the pitched battle between the two even “sides” has seemingly been reinforced by election results. In 2000, with Bush and Gore, we even had an episode involving a near-perfect statistical tie.

As noted at the time by Noam Chomsky – like Corbyn, much loathed by Quo-Nothing types as a hygiene-averse whiner who poisons young minds with unrealistic ideas – you’d normally expect a vote involving over 100 million people to end in a statistical tie only if they were voting for something meaningless or fictional, like the presidency of Mars.

For Americans to be split right down the middle on an issue of supreme importance, Chomsky observed, something had to be a little bit wrong with the voting model.

And there was. The half-versus-half, left-versus-right spectrum has always been a goofball myth. The true divide in the population has never been between Republicans and Democrats, but between haves and have-nots.

Whatever you might think of the Occupy movement, it succeeded in pulling a lid back on some of these illusions by popularizing terms like “the 1 percent” and “the 99 percent.” Occupy described the numerical majority as dupes of a tiny oligarchy, which allowed the disaffected population to choose occasionally between two parties that are funded by the same tiny group of super-wealthy donors. 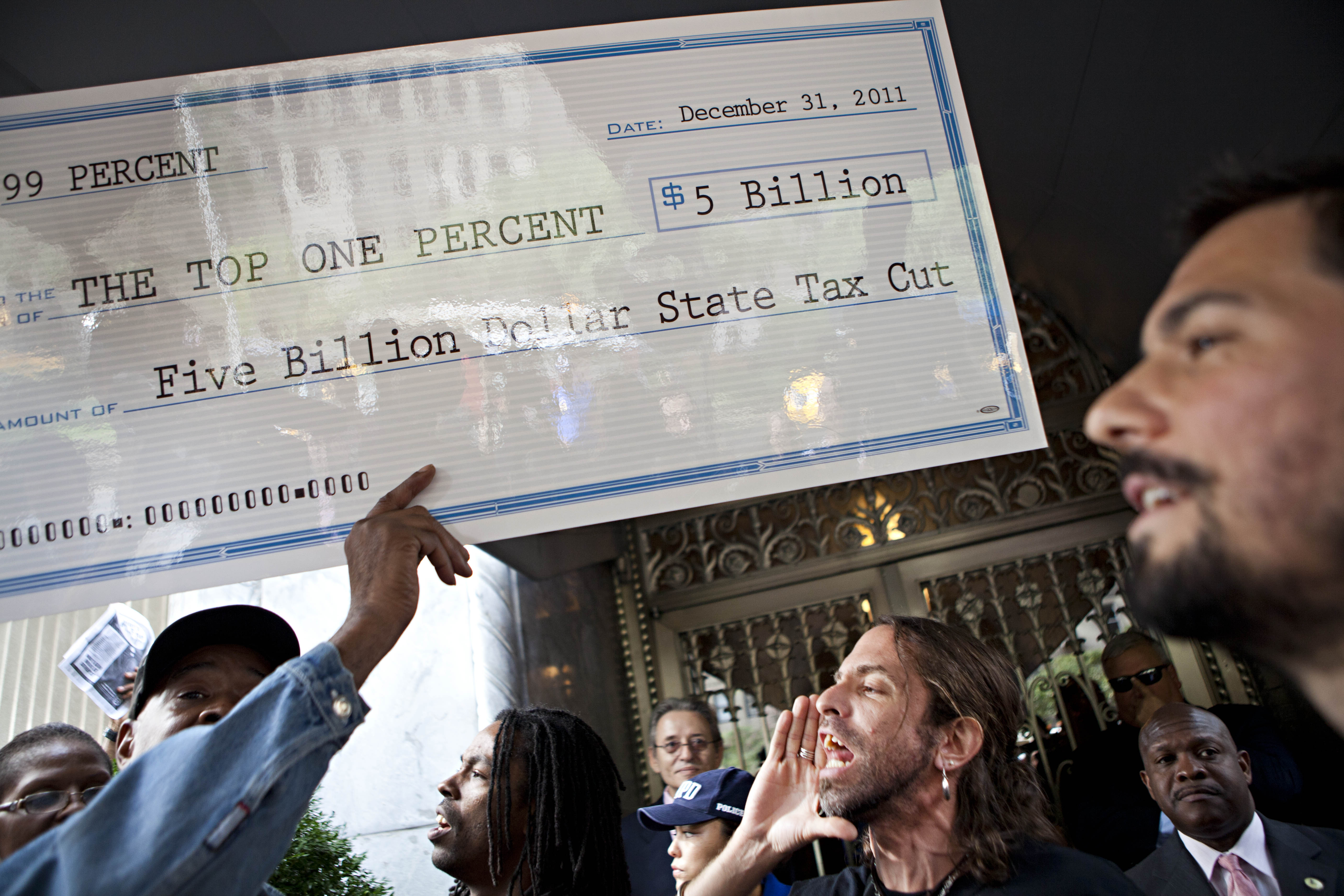 Of course some will vigorously object to any characterization that tries to morally equate Democrats with what is now the Party of Trump (I can already hear the cries of “both-sidesism!”). But Occupy was surely correct in saying the economic picture of America doesn’t fit a 50-50 narrative. Their 1/99 picture was a lot closer to reality.

If we’re going to be exact about it, in fact, the billionaires who still dominate the political donor class mainly reside in the top tenth of a percent. Even in the most conservative possible interpretation of economic data, a general picture of haves and have-nots in the voting population would still be something like 20/80 (20 percent of Americans own 89 percent of privately held wealth, while the bottom 80 percent owns just 11 percent).

The danger implicit in these numbers to the “broadly satisfied with the status quo” types is obvious. If 80 percent of Americans ever realized their shared economic situation, they could and probably should take over government. Of course, they wouldn’t just be taking power for themselves, they’d be taking it from the big-dollar donors who own such a disproportionately huge share of wealth in our society.

Such people of course have many very good reasons to embrace the status quo. The problem is, they’re not terribly numerous as a group, which unfortunately for them still matters in a democracy. It’s one of the unpleasant paradoxes of exclusive wealth. If you live in a democracy, you’re continually forced to manufacture the appearance of broad support for the regressive policies underpinning your awesome lifestyle.

In the 2016 presidential election, voters in both parties were more willing than ever to say they felt alienated from the “center.” They were also more likely to view big-city media figures like Frum and myself as agents of a phony system out to sell them a fake version of “reality.”

Here and abroad, voters in other words stopped deferring to politicians and media figures and began making their own decisions about what is and is not realistic.

The results have been mixed to say the least. But let’s not pretend that the election of Donald Trump is the same as support for Jeremy Corbyn, or that either of these things are the same as a Catalonian separatist movement, or Brexit, or whatever – just because all these developments may be equally horrifying to “those broadly satisfied with the status quo.”

If those of us in the media spent less time lecturing about the wisdom of the status quo, and more time treating disaffected voters like the overwhelming majority they are, we might at least stop face-planting on our election predictions. We’re not the center anymore, and we have to stop acting like we ever were.