The 'Good Guy With the Gun' Is Never Black - Rolling Stone
×
×

Emantic Fitzgerald Bradford, Jr., was a good guy, if you believe his mama.

“Emantic was that person who people went to when they needed someone to talk to,” April Pipkins tells Rolling Stone on Monday, four days after her son, known as “EJ,” was shot to death by a police officer in Hoover, a suburb of Birmingham, Alabama. He was only 21-years-old. “It was just heartbreaking, because I’ve lost my best friend also. I know that, if anything, he was trying to help people. That was his character. That’s how I raised him.”

That is why Pipkins believes the witnesses on the scene at the Riverchase Galleria who, according to family attorney Benjamin Crump, claim that Emantic was trying to help the situation on Thanksgiving night. “Several people have said that he was responsible for saving their lives,” he said to me. Shots had rung out at the mall, and an 18-year-old man was hit. So, too, was a 12-year-old girl whom the Hoover police department called an “innocent bystander.” But Bradford, a recently discharged Army veteran who had a permit to carry a firearm in his open-carry state, was the only person who died that night. 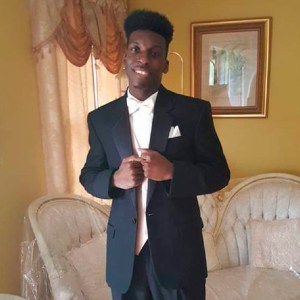 Emantic Fitzgerald Bradford Jr., 21, posing for a picture at his father’s home near Birmingham, Ala., in his senior year of high school. Photo: Emantic Bradford, Sr. via AP

The Hoover police department has had difficulty explaining why Bradford is dead. First, it was because he was supposedly the mall shooter (he wasn’t). “Thank God we had our officers very close,” Nick Derzis, the Hoover police chief, told AL.com. “They heard the gunfire, they engaged the subject, and they took out the threat.” Then a day later, the department told us that he “likely did not fire the rounds” that struck the two victims. But wait! Bradford “may have been involved in some aspect” of the crime, the police claimed in a since-deleted tweet. That seems likely why both the city of Hoover and the department said in a joint statement on Monday that “the initial shooter” was still at large and that Bradford “brandished a gun during the seconds following the gunshots, which instantly heightened the sense of threat to approaching police officers responding to the chaotic scene.” (Crump claims that the Hoover officer pulled the trigger without issuing any verbal warnings or commands; the department has yet to respond to Rolling Stone’s request for further comment.)

Yet another Hoover statement on Monday clarified the “brandishing” remark, specifying only that “Mr. Bradford held a gun in his hand.” The Galleria prohibits guns, but Alabama is one of 45 states with some form of open-carry laws on the books. In 2013, Alabama’s state legislature clarified that “the mere carrying of a visible pistol, holstered or secured, in a public place, in and of itself,” did not constitute the crime of disorderly conduct.

But Bradford would have had his gun in his hand if he were trying to help, right? Using his legally licensed firearm to stop a shooter? Isn’t that what the NRA and President Trump have told us to do?

After the terrorist shooting at a Pittsburgh-area synagogue killed 11 people on October 27th — yes, that was just a month ago — Trump said,  “If they had protection inside, the results would have been far better.” It is a variation of the same argument that he made after the Valentine’s Day massacre at a Parkland, Florida, high school, and before that, after the Sutherland Springs, Texas, church shooting that left 26 dead last year. It’s the same theory that NRA boss Wayne LaPierre offered after the Sandy Hook school slaughter in 2012: “The only thing that stops a bad guy with a gun is a good guy with a gun.”

This is their prescription for public safety: American streets and venues as a Second Amendment theme park, a Westworld come to life but with real blood and real consequences. It is not so much macho fantasy as it is an idea sold by a gun lobby seeking to enhance its income (which appears to be dwindling). Now, a president who only understands masculinity and power as violence and aggression is happy to endorse the notion that a shooting can only be ended by more shooting. That theory has many fatal flaws, but its central one is that the color of our skin appears to disqualify us for the role of a Good Guy With a Gun.

Bradford’s death is hardly the only evidence of this. Two days after Bradford was killed, Jemel Roberson’s family buried him.

Outside of being black, Roberson fit the Good Guy with a Gun image to a T. The father of a nine-month-old with another baby on the way, the 26-year-old aspired to be one of the supposed Good Guys: a police officer. It was nothing-good-happens-after-o’clock in the morning on November 11th, and Roberson was working as an armed security guard at Manny’s Blue Room lounge in Robbins, just south of Chicago. He actually stopped a shooting himself — not by killing the perpetrator, but by detaining him. As Roberson kept his knee in the shooter’s back, he was the hero of the night. Until a police officer from suburban Midlothian showed up and, according to bystanders, ended Roberson’s life with virtually no warning.

Similar to what Hoover did with Bradford, Midlothian Chief Daniel Delany misidentified Roberson as “a subject with a gun” before recanting and calling him “a brave man who was doing his best to end an active shooter situation at Manny’s Blue Room.” Is that how it works? Do we only get to be the Good Guy With a Gun after we’re dead?

The lack of ability to imagine black people as heroes may be one explanation for these shootings. That was one of the countless things that James Baldwin was right about. American fiction is a significant contributor to our ideas of heroism both on the page and onscreen, and as the author both wrote and said in 1965, “It comes as a great shock to see Gary Cooper killing off the Indians, and although you are rooting for Gary Cooper, that the Indians are you.” Regardless of color, we all are trained from an early age not merely to synchronize whiteness and heroism, but are fed narratives that discourage us from forming any other conclusion. Barack Obama wasn’t enough to change that, to say nothing of Lando Calrissian, Roger Murtaugh or Axel Foley. Not even T’Challa from Black Panther or Chris from Get Out. A childhood of seeing men of color as cannon fodder for Clint Eastwood, John Wayne and other assorted Good White Guys With Guns has an effect on folks.

This is why we don’t expect the NRA or the president to say a word about Bradford and Roberson, all but vindicated in their deaths. Nearly two years later, we are still waiting for them to adequately respond to the death of Philando Castile, the Minnesota school worker who even told the officer during the traffic stop that he was a Good Guy With a Gun and wasn’t believed. We are most useful to them either as victims or as the victimizers. Never as the hero. 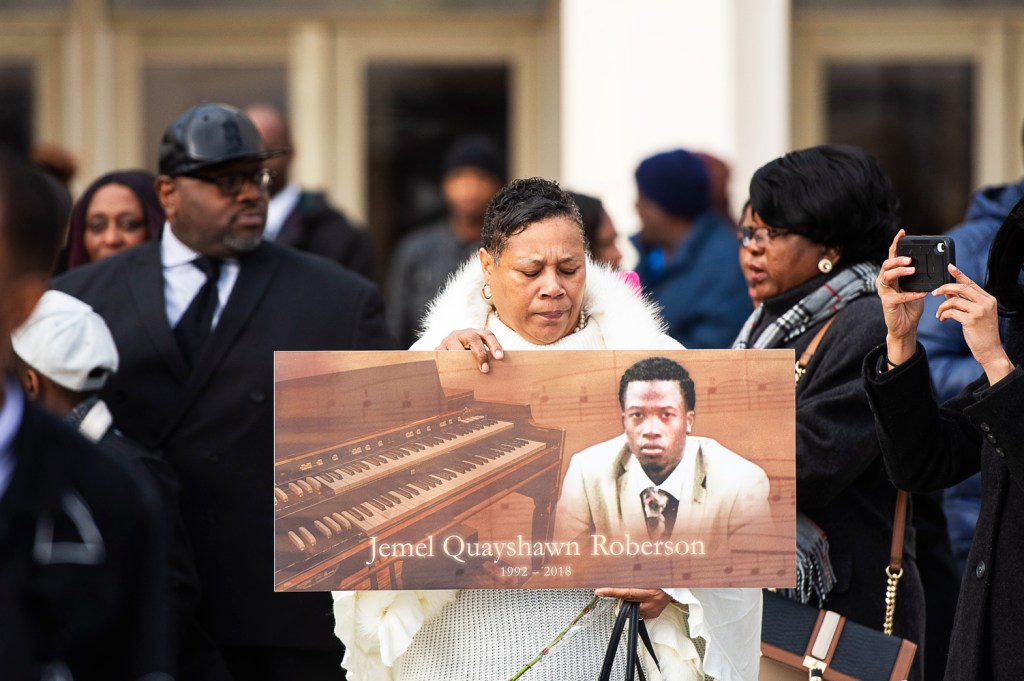 A woman holds up a sign with Jemel Roberson’s image at his funeral, Saturday, Nov. 8, 2018, in Chicago. Photo: Tyler LaRiviere/Chicago Sun-Times via AP

A frontier-justice solution to crime will exacerbate this problem, producing disproportionately more black deaths. The late director George Romero was smart enough to encapsulate this in 1968, concluding his zombie classic Night of the Living Dead with the surviving black protagonist, Ben, gunned down by a white man dispatched to restore order. Ben was holding a rifle, to boot. (If you haven’t seen it, consider if the ending of Get Out went sideways.)

This isn’t about whether or not you like guns, whether you’d like to stockpile them or melt them all down. This is about everyone being able to enjoy the full freedoms guaranteed by the Constitution, and thus equal protection under the law. I don’t point to Bradford and Roberson as cautionary tales in order to discourage black folks from arming themselves; violent white extremism on the Right has become the central terror threat to the United States, after all. The Black Panthers of the Sixties taught us this lesson, most notably in 1967 when their armed presence in California’s capitol led to the passage of sweeping firearms control legislation that the NRA actually supported. Naturally, because while the gun lobby sells to everyone, it speaks primarily for white, conservative men. They skate by, never taking account for the urban gun violence that men like Donald Trump are all too eager to exploit.

When I asked Pipkins why her late son EJ carried a gun, she said, “Protection, pretty much. There is just so much going on. He had it for the reason why any other decent American would have one.” Alas, were we actually Americans, entitled to all of the Constitution’s freedoms, Bradford might still be alive. We can’t be the Good Guys With Guns until we are no longer the Usual Suspects.