DNIPRO, Ukraine — On the morning of the massacre in Kharkiv, I woke up in a comfortable bed. On Sunday night, the shelling hadn’t been as bad — or I had decided to pretend it wasn’t as bad while I slept in my room on the 7th floor on a mattress, beneath a duvet. I texted Vlad, our driver from a few days earlier: “Quiet today I believe. Perhaps it is safe to go to Dnipro?”

“Seems so,” he replied. After some back and forth, he gave the go ahead: “Ok, be ready.” I jumped in the shower, put on clean clothes, basking in what might be my last moments of luxury for the foreseeable future.

I packed my things and went down to the hotel lobby, grabbing two complimentary water bottles on my way down. I stopped by the front desk to turn in my keys. “Quiet last night?” I asked Igor, who was manning the front desk. He agreed. I asked about his family, and he said they were OK. I told him we were leaving today, and thanked him for his help. Vlad arrived. We waited for my colleague. It was 9:30 a.m. when everything fell apart.

The first bombs landed in the distance, the same way they had been for weeks. Suddenly, the lobby was full of movement. The Washington Post team came down the stairs, wearing armor and pulling bags. “We’re going,” they said. “There’s a spot for you if you want.” Journalists from The Telegraph and The Sun offered us a ride, and we accepted. There were two other young freelancers in the hotel with no way out, so I asked Vlad if he would take them instead. He agreed, but appeared slightly confused. “Pack your shit,” I told the pair. “Let’s go. Five minutes.” We were all convinced that this was it, and that the window to leave was closing. The bombs were getting louder.

The young freelancers jumped in the car with Vlad, and they hit the road. As we loaded the next car, a blast crashed through the parking lot. A shell landed just a few blocks away. Everyone ducked, stumbling. We scrambled out of the parked car and back into the hotel lobby, unsure of what to do. The staff was shocked. Ten minutes earlier, we had been the calmest we’d been in days.

Another blast went off further away. “Go, go, go, go!” We piled back into the car, waving for the Telegraph team to take the lead. We followed them out of the city, seemingly driving both too slow and too fast, weaving around potholes. We passed people walking calmly down the street, inured to the shells because they had no choice but to go about their lives. They could not leave with us, the Western press, fleeing from a city that appeared to be on the verge of collapse. 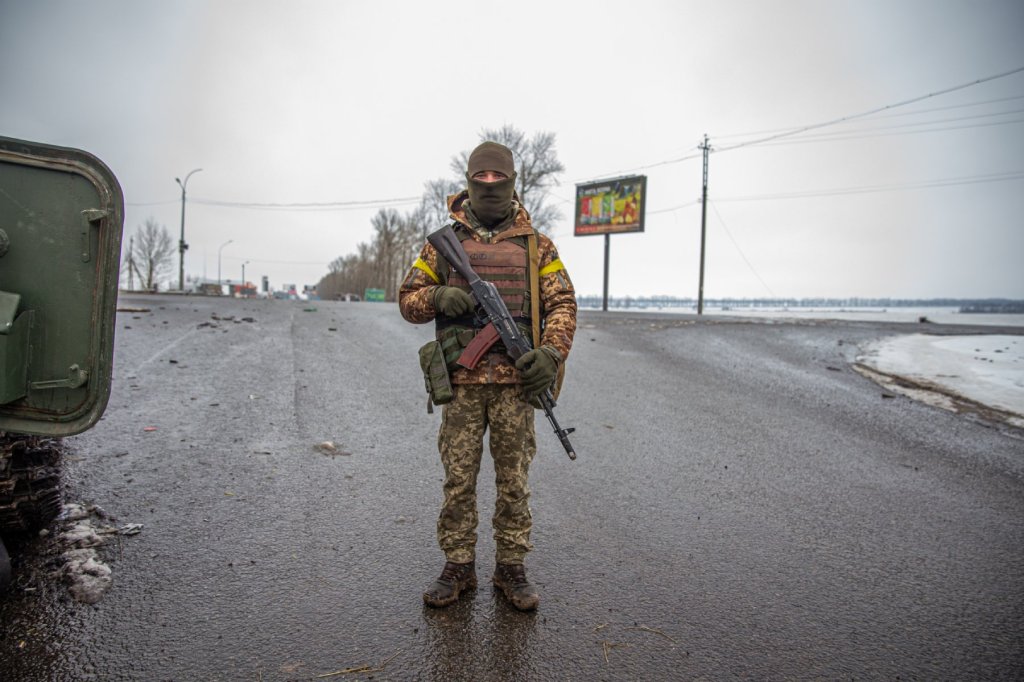 It’s a natural thing to put yourself first during a war. As we sped out of the city and the shelling faded, I felt nothing but relief. The past four days had been the most stressful of my life — a claustrophobic straitjacket of fear. On the road, we passed checkpoints, soldiers moving into defensive positions, civilians pitching in to help dig trenches. The road was often cut with huge swathes of mud where tracked vehicles had blown through nearby fields to cross the raised highway in search of a better position. A massive convoy of volunteer defense fighters in mismatched civilian cars stretched for a hundred yards down one section of highway. They wore odd boots and running shoes, their cars old and battered — Ladas, VWs, Citroëns. The rich, it seems, are slower to answer a country’s call.

Everyone was jumpy. At an abandoned gas station an hour outside of the city, a car in our convoy was briefly held at gunpoint by a militia for taking a picture of the blank signs indicating the pumps were empty. But slowly, the danger passed. The roads cleared. At a town called New Moscow, we passed a clean and full gas station — shelves stocked with candy and coffee, its pumps full and working. I bought gummy bears, Snickers and a Coke Zero, and took a photo of some friendly stray dogs. Behind us, people were starting to die.

Russian forces had been shelling the outskirts of Kharkiv, Ukraine’s second-largest city, consistently during the first four days of the war. The thump of artillery and thunder of rocket strikes had become an omnipresent part of daily life, even in the city center. But on Monday morning, the violence changed. In a neighborhood called Saltivka near where Ukrainians fought off a Russian attack just days earlier, Russian forces launched at least three Multiple Launch Rocket System (MLRS) attacks. The weapons didn’t hit soldiers in their fighting holes along the highway, but civilian buildings. Regional authorities claim 11 people died, including a family of five who burned alive in their car.

It was the first massacre of many. Since I began this piece, there have been more. On Tuesday morning, Russia struck a building one block from our hotel with a cruise missile. Later that evening, it began bombing the city center with planes. Videos from that night show a pitch black sky ripped apart by a hellish lightshow of rocket flares and flames. On Wednesday, more cruise missiles. Kharkiv went from a place where one could track specific attacks to a place where violence must be summarized just to understand its scope.

You have likely seen some of the videos by now — they have played on repeat on every major news network. But, I doubt that the general public understands just what these weapons do. The MLRS system is not a precision weapon. Rather, it is designed to destroy and terrify, maim and wound, burn and shred, tear and kill. The largest Russian version is called a SMERCH. In Russian, “smerch” means “whirlwind” or “tornado” — and it’s no surprise why. The SMERCH has 12 tubes on the back of its truck, and when it is fired, all of them discharge rockets weighing almost 1800 pounds tipped with a warhead weighing 550 pounds. This warhead, in turn, can contain a cluster of 72 four-pound “sub munitions” that each release up to 96 individual fragments of metal — any one of which can immediately end a human life. The bomblets themselves often do not detonate, meaning that there are often dozens or hundreds of small deadly bombs spread across an area after an attack has ended. What often happens next is that curious children pick up the bomblets, and die. (It is worth noting that cluster munitions are banned by an international treaty that both the U.S. and Russia refuse to sign.)

It is often absurd to focus on the specific tools used in war. The aim is always the same: death. But in this case, the scope and intent of the death we left behind in Kharkiv is telling. Russian leadership, frustrated by their failure to quickly topple the country, has shifted its tactics. Resistance in Kharkiv and Kyiv — and smaller towns that do not make the news — will be punished by the most brutal possible methods. Indiscriminate rocket or artillery attacks are now willingly sent toward civilian areas. Already, the death toll in Kharkiv has risen to at least 21, with over 100 injured, according to local authorities. On Monday, Amnesty International opened an investigation into the first attacks. By the time these investigators reach the city, they may have little to distinguish those initial strikes from the dozens that will surely follow.

I will never reach the scene of those strikes either. I have left Kharkiv and I am not going back. The danger and pain there is immense, and I do not want my life to be consumed by it. But there is also the sense that, as a journalist, I have abandoned some duty to continue covering a story that is only just beginning. I have abandoned people whose entire lives are in a city I can leave at will. As I drove through the neighborhood where the first cluster bombs struck two days before, hundreds of civilians stood in line for the grocery store. I asked Vlad, our driver, where he lived. “Actually, not so far from here,” he said. He was a tour guide before the war.

After he dropped off our colleagues in Dnipro I did not hear from Vlad for days. Logically, I know there was a good chance he was fine. Perhaps his cell service was out, or his phone was dead. But, this is a war. Death is always there. I texted again and again. Eventually, he replied. His mother and sister had left for the west. He and his sons would stay. I told him to take care, the platitude as empty as any can be — meant only for me, someone who made the choice to leave.