The list of nitwits in the Trump administration is long. Betsy DeVos, in charge of education issues, seems capable of losing at tic-tac-toe. Ben Carson thought the great pyramids of Egypt were grain warehouses. Rick Perry, merely in charge of the nation’s nuclear arsenal, probably has post-it notes all over his office to remind him what things are: telephone, family photo, souvenir atomic-reactor paperweight, etc.

Lots of dunces, but chief strategist Steve Bannon, sadly, isn’t one of them. The intellectual leader of the alt-right movement is no genius – nobody with his political views could be – but neither is he an idiot. He’s one of the few people in that White House with even a primitive grasp of long-term strategy, which makes his impulsive-seeming decision to call The American Prospect this week curious.

In the interview, Bannon said there was “no military solution” to North Korea’s posturing. He stressed his efforts to fight economic war with China, adding, in a Scaramuccian touch, that his intramural foes on that front were “wetting themselves.”

When asked about the Charlottesville tragedy, Bannon called the neo-Nazi marchers “a collection of clowns.” He also called them “losers” and a “fringe element.”

There Is No Way to Survive the Trump White House

This theoretically should be a dark time for Bannon, since Charlottesville reminded the whole world of his inexplicable and indefensible presence in the White House. The story has even the National Review howling for his dismissal.

But Prospect writer Robert Kuttner noted with surprise in his piece that Bannon seemed upbeat. He essentially told Kuttner he believed the Charlottesville mess and stories like it were a long-term political windfall for people like himself.

“The longer they talk about identity politics, I got ’em,” he said. “I want them to talk about racism every day. If the left is focused on race and identity, and we go with economic nationalism, we can crush the Democrats.”

Kuttner’s write-up of this strange interview was interesting. He correctly wondered at Bannon’s strategy of calling a progressive outlet like The Prospect, and in particular calling a writer like Kuttner, who has such an unequivocal recent history of bashing the president.

Kuttner also noted that Bannon, as media-savvy a person as there is in that White House, didn’t even bring up the issue of whether or not the call was on the record.

Was that an oversight? It seemed unlikely, given that exactly such an impromptu on-the-record phone call just got Anthony Scaramucci guillotined.

I reached out to Kuttner and asked what he thought.

“I honestly think he messed up and forgot to put the conversation off the record, and treated it as a candid strategy talk with a comrade,” Kuttner said. “It came across as part candid strategy session and part stream of consciousness.”

On one level, this sort of hey-we’re-all-intellectuals-here banter is a ploy, not just transparent but insulting. Kuttner sniffed it out without much trouble.

“[Bannon] simultaneously tries to make alliances with lefties on economic nationalism, while doubling down on the racist, anti-immigrant stuff, and assumes that people will naively work with him on selected issues and excuse his larger role,” he says. “It’s classic hubris.”

On the other hand, what Bannon said probably did really reflect his thinking on some level. So what do we take from that?

Bannon’s dismissal of the Charlottesville Nazis as “losers” who need to be suppressed – “We gotta help crush” them, he actually told Kuttner – seems insincere to say the least.

But remember: the snooty, college-based wing of the racialist right Bannon leads has always thought of itself as a cut above the mean – the thinking man’s Nazi movement, if you will. And its leaders have always looked upon goose-steppers like the Charlottesville goons as political liabilities.

This comes through repeatedly in alt-right writing. Take the unofficial alt-right manifesto, published on Breitbart back when Bannon was still editor: “The Establishment Conservative’s Guide to the Alt-Right.”

Written by Allum Bokhari and the infamous Milo Yiannopoulos, it describes a new-age racist movement, with goals beyond an adrenaline rush for beered-up hicks or shaven-headed teens.

“Skinheads, by and large, are low-information, low-IQ thugs driven by the thrill of violence and tribal hatred,” they wrote. “The alternative right are a much smarter group of people — which perhaps suggests why the Left hates them so much. They’re dangerously bright.”

A very arguable point, but they believe it. Milo/Allum went on:

“Those looking for Nazis under the bed can rest assured that they do exist. On the other hand, there’s just not very many of them, no one really likes them, and they’re unlikely to achieve anything significant in the alt-right.”

Passages like these are exactly what make the Bannonite alt-righters so dangerous. They’re Nazis, but with media awareness. And they don’t want to take over a Virginia street, or an Oregon bird sanctuary, for a few hours here and there. They have much broader ambitions. They want it all – the world, Chico.

I personally am skeptical of the multiple news reports pointing at Bannon as the reason for Trump’s outburst. It doesn’t fit with what happened after Bannon came aboard to run Trump’s campaign, oddly enough exactly a year ago this week.

Trump on August 17th of last year was in the 27th day of an incredible poll tailspin, a devastating cascade that began after the Republican convention and continued through a series of seemingly fatal scandals and fiascos. Those included his insane broadside against Khizr Khan, an open call for Moscow to hack Hillary Clinton’s emails, and a did-he-really-say-that call for “Second Amendment people” to “maybe” do something about his opponent.

These disasters had left Trump behind Clinton across the board, and more importantly by double digits or close to it in key states like Florida and Pennsylvania. There was seemingly no path to victory. 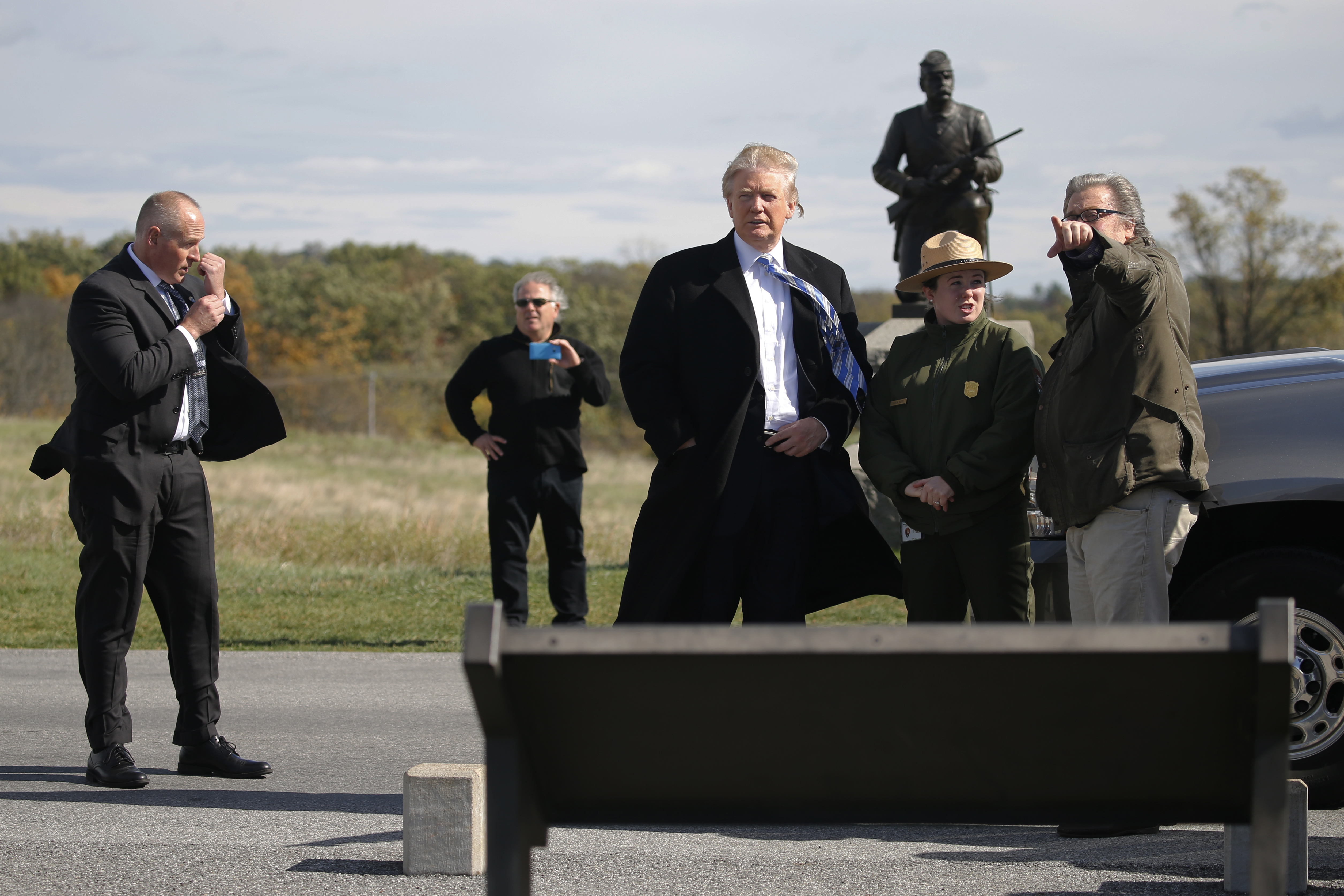 The almost universal assessment of conventional wisdom at the time, even on the Republican side, was that Trump’s decision to bring Bannon in was political suicide. Bill Kristol, of all people, called it “the merger of the Trump campaign with the kooky right.”

But as soon as Bannon came aboard, Trump changed course in an unexpected direction. One change was stylistic. He started to read from prepared remarks on the stump more, cutting down on the off-the-cuff rants that had gotten him into so much trouble.

Content-wise, this was the time when Trump embarked on his parody of a racial healing tour, telling mostly all-white crowds from Detroit to Des Moines that he would be the savior of black America. You might remember these infamous “Black America, what do you have to lose?” speeches.

This was all Bannon. Trump’s path to victory, he reasoned, was simple: He just needed to recapture Mitt Romney’s voters, and he would at least have a puncher’s chance against a shaky Democratic candidate. But many Republicans thought of Trump as too overtly racist.

Bannon understood that the bulk of the Republican Party liked to think of itself as tolerant, and preferred that its bigotry be kept under the surface.

Hence the preposterous speeches about racial sensitivity to a succession of all-white audiences. I was one of many reporters who watched this act on the road last year and wondered if Trump, and by extension Bannon, had lost their minds.

They hadn’t. Bannon’s Machiavellian gambit, which was designed to give mainstream Republican voters psychological permission to vote for a racist candidate, saved Trump’s campaign.

In less than a month, he not only completely reversed Trump’s tailspin, but helped him gain ground besides. By mid-September, polls showed Trump within two points of Hillary, or even in a dead heat in some cases.

Does the architect of that strategy sound like the person who would urge Donald Trump to publicly embrace Nazis after Charlottesville? It’s possible, I guess, but I doubt it.

What seems more likely to me is that Bannon is generally responsible for developing these ideas in what’s left of Trump’s brain, which in turn spilled out in disorganized fashion when Trump himself decided to address the issue.

In contrast, Bannon’s interview with Kuttner about the “clowns” of Charlottesville proves that no matter what he believes inside, he understands the optics of this immediate controversy far better than his boss does.

And that’s exactly why Bannon has to be fired. Trump once again has proved this week that by himself, he is too incompetent to marshal the political energy that swept him into office. The man is incapable of self-control or long-term strategic thought, and on some level, thank God for that.

But Bannon is the one person in that White House who we know for sure both embraces a white supremacist ideology and has a vision for how to implement it. The mere threat of that, that Trump’s political energy might somehow be married to a sober strategy, is terrifying and unacceptable. Bannon saved Trump’s political career once. He can’t be allowed to do it again; he has to go, and finally let Trump drown on his own.