Since the dawn of the Drug War, federal legislators have stood by, or even applauded, as millions of Americans have racked up convictions for marijuana offenses — with arrests increasing in the latest FBI crime statistics, despite nearly a dozen states having already legalized cannabis. But over the past two years, and now accelerating with Democrats in charge of the House of Representatives, federal marijuana reform has become a hot topic on the Hill. Congress is weighing measures to tax and regulate cannabis; to open the federal banking system to pot businesses; to allow the industry to claim federal tax deductions; and, most powerfully, to repair the harms created by generations of prohibitionist policies.

Republicans and Democrats Agree: It's Time To Take on Tech Titans

Tax the Rich! Also the Very Affluent! But Mainly the Rich!

“The federal momentum around marijuana reform is at the highest we’ve ever seen,” says Queen Adesuyi, who coordinates federal policy for the Drug Policy Alliance. The issue has gained traction across the political spectrum, from right-wing Alaska Rep. Don Young to moderate Senate Minority Leader Chuck Schumer to left-wing superstar Rep. Alexandria Ocasio-Cortez. Even former GOP House Speaker John Boehner has joined the board of a marijuana firm. “It’s an unprecedented moment,” Adesuyi says.

“It’s not a question of if we’re going to get a federal law,” says Sen. Ron Wyden, a Democrat who represents pot-legal Oregon and is the ranking member of the Senate Finance Committee. “It’s a question of when.” At the national level, Wyden says, politicians are eager to bring order to the new marijuana reality, as half a dozen states, from Illinois to New Mexico, weigh legalization this year alone. “People are seeing that we’re headed to a crazy quilt of state laws,” he says, “and it would really make sense to have a federal, uniform set of rules.”

The most surprising development is that congressional efforts seem to have backing from Attorney General William Barr. In a previous stint leading the Justice Department in the 1990s, Barr authored a report titled “The Case for More Incarceration,” and he’s made clear he opposes marijuana reform as a personal matter. But during his nomination hearing in January, Barr vowed to end his predecessor Jeff Sessions’ crusade against state-legal pot, citing industry investments that were made under assurances by the Obama administration that pot businesses were not a priority for federal prosecution.

Barr then threw down a challenge for Congress. “The current situation is untenable and really has to be addressed,” he said, likening state marijuana reforms to a “backdoor nullification” of national law. (Since the early 1970s, marijuana has been classified under the Controlled Substances Act as a Schedule I drug, on par with heroin.) “If we want states to have their own laws,” Barr said, “then let’s get there. And let’s get there the right way.”

The “right way” is ripe for debate on Capitol Hill, and in the 2020 race for president.

Marijuana businesses have rallied behind a quick-and-dirty bill that would give legal cover to the $10 billion industry. Sens. Elizabeth Warren (D-Mass.) and Cory Gardner (R-Colo.), each hailing from marijuana-legal states, have co-sponsored the Strengthening the Tenth Amendment Through Entrusting States (STATES) Act, which was reintroduced this month.

The STATES Act does not remove marijuana from the Controlled Substances Act. But it does exempt pot-legal states from federal marijuana enforcement, if they adhere to baseline standards. The bill also tweaks laws to improve industry access to banking and to grant pot businesses federal tax deductions. “It’s a very simple bill, and I think that is the selling point,” says Michael Correia, director of government relations for the National Cannabis Industry Association. In March, a House committee voted to advance an even narrower bill, the Secure and Fair Enforcement Banking Act; it would safeguard banks that serve state-regulated pot businesses from charges of money-laundering.

Other reformers in Congress, however, reject this industry-centered approach. They see pot businesses building on top of the inequality created by the racist enforcement of the Drug War. In February, Rep. Barbara Lee (D-Calif.) introduced a nonbinding resolution called “Realizing Equitable & Sustainable Participation in Emerging Cannabis Trades,” or RESPECT, co-sponsored by Ocasio-Cortez, among others. Noting that “less than one percent of the cannabis industry is owned or operated by people of color,” the resolution calls on lawmakers and the industry to address the “most egregious effects of the War on Drugs on communities of color.”

The Marijuana Justice Act, introduced by Lee in the House and Cory Booker (D-N.J.) in the Senate, likewise insists that the case for legalization is rooted in the harms prohibition has inflicted, disproportionately, on minority communities. “To say that we’re just going to legalize and move forward, without addressing the damage that has been done, without addressing the injustices that have been heaped upon people, to me is unacceptable,” Booker tells Rolling Stone.

The Marijuana Justice Act begins by removing marijuana from the Controlled Substances Act and making it legal under federal law. It adds provisions to expunge arrest records for past marijuana offenses, and offers a pathway to early release for many now behind bars. Most controversially, the bill creates a reinvestment fund of at least $500 million a year — a form of reparations for the communities hit hardest by the Drug War.

Introduced with little fanfare last Congress, the bill is a hot ticket today, gaining co-sponsorship by six of the 2020 presidential contenders in the Senate. “Too many lives have been ruined because of the War on Drugs,” Sen. Kamala Harris (D-Calif.) tweeted in February, declaring her “proud” support of Booker’s bill. “We must change the system.” 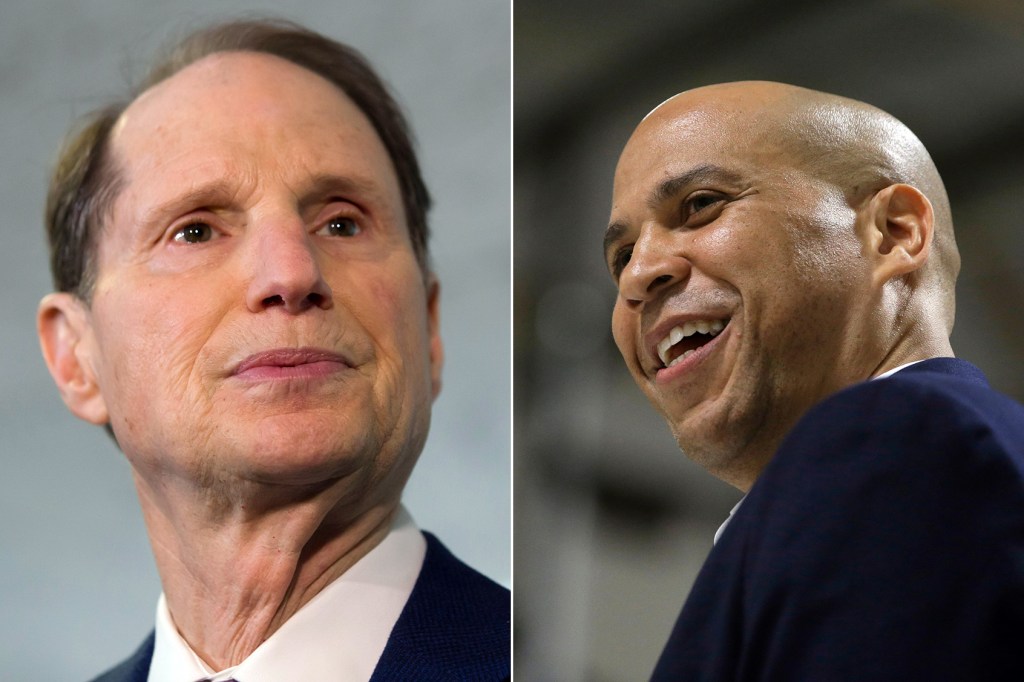 In gridlocked Washington, where funding the daily operation of government is a heroic feat, near-term prospects for pot reform are uncertain. Rep. Ro Khanna (D-Calif.), a lead sponsor of the Marijuana Justice Act, says he’s “optimistic” the House can pass a bill centered on legalization and record expungement. But he concedes, “There is a generational issue. Some of the members are having a struggle. We still have some convincing to do.”

In the Senate, roadblocks abound. “The Senate is not where the House is,” says Wyden. But it’s not unthinkable that a bill could advance. Adesuyi of DPA insists that Booker’s bill — building off the success in the last Congress of the criminal-justice reform bill known as the FIRST STEP Act  — hits a bipartisan “sweet spot.” Gardner says that the STATES Act, which has four GOP co-sponsors, can pass if it reaches the Senate floor: “If it has a vote, it has over 60 votes.” He believes Trump supports reform; others are skeptical. “It’s not like we have Rand Paul as president,” Khanna says. “I don’t think we’re ever going to get this administration on board, and that means it’s going to have to be a new president that gets this done.”

Given that trajectory, reformers are thrilled the Democratic field is rallying behind the Marijuana Justice Act. Khanna, who co-chairs Bernie Sanders’ campaign, believes centering legalization in the election will give the next Democratic president “a mandate to implement change.” Booker, himself a candidate, insists the moral core of his bill can help it transcend partisanship. “This is so much bigger than presidential politics,” he says. “This has been a driving purpose since I watched firsthand how privileged people could use marijuana without fear of repercussion, and how poor kids and minority kids have no margins whatsoever.”

If the Marijuana Justice Act is a statement bill — designed to guide the national debate — other lawmakers are developing detailed legislation to disentangle marijuana from federal criminal statutes. In the House, Judiciary Committee chair Jerry Nadler (D-N.Y.) is said to be working on a comprehensive legalization package. And from his perch in the Senate, Wyden has introduced a series of bills that — in a nod to the mythical numerology of stoner culture — start with S.420.

Wyden’s bills offer a three-step path to the full federal legalization, regulation and taxation of pot. The least controversial bill, S.422, would normalize pot businesses under the IRS tax code. Currently, because they’re “trafficking” in a federally controlled substance, these firms cannot claim routine tax deductions. The next step, S.421, systematically destigmatizes marijuana under federal law. It would prevent people in state-legal businesses from getting arrested or being hit with civil penalties; empower veterans, whose health care is administered federally, to obtain medical marijuana in states where it is legal; grant marijuana businesses access to banks; and create a path for people with past marijuana violations to expunge their records — opening access to federal housing and student aid, and guaranteeing that marijuana isn’t a barrier for immigration and naturalization.

S.420 is the capstone bill. It would remove marijuana from the DEA’s schedules. In turn, the federal government would get a cut of pot revenues, through an excise like the government now imposes on alcohol. The bill would require all pot enterprises to register with the Treasury Department, as well as offer support to states that continue to ban marijuana and don’t want a flood of imports from neighboring legal states.

Wyden is optimistic that even conservatives are movable on this issue. He points to a bipartisan victory in the last Congress: “It wasn’t very long ago when I introduced the first hemp bill, but we ended up in a relatively short period of time having a McConnell/Wyden bill,” he says. “And it is now law.” Hemp is no longer governed by the Controlled Substances Act, legalizing not only the industrial fiber but also the market in CBD, expected to grow to $16 billion by 2025.

Advocates say the tipping point on federal pot policy can’t be reached without intense public pressure. In a web broadcast from his Senate office, Booker, with Lee, made a direct appeal to the nation’s pot consumers. “If you are digesting an edible, if you are smoking,” Booker said with a smile, “don’t think, ‘Hey, I’ve got my rights.’ No. Please be concerned about all the people who are suffering because of this prohibition.”

“If just the people who have used marijuana in the United States of America got behind this bill,” Booker said, teeing up Lee to finish the sentence, “we’d win tomorrow!”