No group of voters is more fetishized than white people who didn’t attend college.

For Donald Trump’s campaign, in particular, these Americans represent the key to the kingdom. “I love the poorly educated!” Trump told a raucous crowd of supporters after winning the Nevada caucuses in February.

Trump did dominate among this demographic during the GOP primaries – though fewer than 15 percent of eligible voters participated in that contest. Now his campaign is banking on the “white working class” to give him yuge victories in the Rustbelt states of Pennsylvania (where polls have him trailing Clinton by 7 points), Michigan (where he’s behind by 7.5 points), Wisconsin (under water by 10 points) and Ohio (which is actually a squeaker at this point).

But Trump, like most political observers, has a poor understanding of what motivates these voters, and that’s likely to lead to a hard landing for what passes for his presidential campaign. Trump’s tried to build a cheapo ground game on the fly, and his campaign has reportedly put an enormous amount of his campaign’s limited resources into the Rust Belt states, hoping to turn out the white working-class vote in huge numbers. But that’s a bet he probably wouldn’t want to cover in one of his casinos.

Liberals have long engaged in hand-wringing about non-college-educated whites as well. Like Trump himself, Thomas Frank is certain the billionaire’s anti-trade-deal rhetoric will finally expose Democrats’ fecklessness and send white working-class voters into his warm embrace. Michael Moore agrees – he talks about “working people,” not necessarily white ones, but we know how Trump’s going to do with people of color. And T.A. Frank (no relation to Thomas) worries that the Dems’ chardonnay cosmopolitanism will alienate those embittered working-class Bud drinkers.

It’s a profoundly consequential narrative in Democratic circles. In the early 1990s, winning back some of these voters was the central rationale behind Bill Clinton’s “triangulation” strategy. At the time, polling suggested that he could make inroads with these voters by pitching government “reform,” and especially welfare reform. It may have helped him win, but it ultimately proved disastrous for American liberalism. Thomas Frank and Michael Moore see better trade policies as key to winning over this group, but it also means appealing to their views on public spending, guns, Black Lives Matter and all the rest.

It’s no longer necessary to bend over backwards for these voters. Whites – all whites – made up 87 percent of the electorate back in 1992, but this November they’re projected to cast just 69 percent of the votes. Barack Obama proved that Democrats can win with around a third of the white working-class vote as part of a broader coalition of people of color, unmarried women and the white “creative class.”

But a near-obsession with these voters persists. And in broad terms, virtually all pundits agree the Democrats have a “white working-class problem.”

Of course most of those pundits are white people with at least a Bachelor’s degree, and there’s quite a bit of condescension built into these narratives. It’s implied that these under-educated white folks are dumb enough to believe a toxic showman who outsources the production of all his tacky merch to China and Bangladesh – and personally recruited undocumented workers to build his high-rises on the cheap – is going to protect American workers against global competition. It’s wrong to assume that people who didn’t get a college degree are stupid.

That has to be at least implied in the notion that this group of white people, unlike more educated whites, will fall for Trump’s shtick. The reality is that, aside from some “Reagan Democrats” moving to the Republican column in the 1980s, the Democrats’ share of white working-class voters in presidential elections has fluctuated pretty consistently with their share of all white votes (and the vote overall). This graphic, by Elisabeth Jacobs at the Brookings Institution, tells the tale: 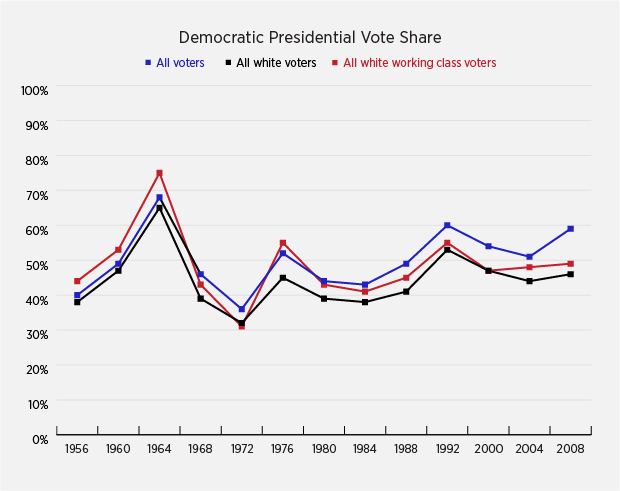 (Quick note: In this piece, I’m using the terms “white working class” and “non-college-educated whites” interchangeably. Some people define the white working class as whites who didn’t attend college and currently have a job. I don’t like that measure because one can have a job today and lose it tomorrow, or vice versa. Jacobs’ analysis is based on whites who self-identify as “working class,” so her data include a small number of college grads.)

The conventional wisdom holds that Trump may be the first Republican candidate to lose college-educated whites in 60 years, largely because women are skeeved out by his misogyny. Shouldn’t we expect the same among non-college-educated white women, and should that bring down his numbers with the whole demographic? Not going to college might somehow make them immune to Trump’s anti-charms, but it’s unclear why that would be.

You can argue that Democrats have a problem with white people in general, and it’s true that they’ve won the popular vote among whites in only one of the past 12 presidential elections. But for the most part this is a Southern white problem. In the Deep South, whites tend to vote Republican at levels that are similar to the Democrats’ share of the African-American vote, and that skews the overall numbers. In 2012, Romney won 61 percent of the vote in Alabama, and Obama got 61 percent in Massachusetts, but Mittens grabbed 84 percent of whites in the Cotton State, while Obama got 57 percent of them in the Bay State.

Another central misunderstanding of non-college-educated whites is the idea that they hold a common social identity. The truth is that a white guy with a high-school diploma in South Boston has lived in a world that’s socially, culturally and politically distinct from that of his counterparts in Indiana or Mississippi.

The graphic below illustrates regional differences in party identification among non-college-educated whites in 2012. 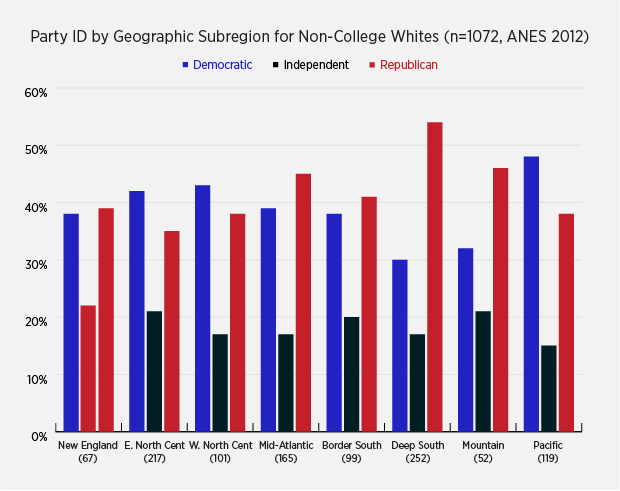 Based on the above, it’s clear Democrats aren’t the only ones with a white working-class problem; though Dems certainly do have a serious problem in the Deep South and the Mountain states, Republicans are unpopular with this demographic in the North-central states and on the West Coast. And the two parties are competitive in the rest of the country. You can narrow that down further, and say Democrats only really have a challenge in the Mountain states, because the Deep South isn’t in play for them. (And to the degree that’s based on racial animosity, I say screw ’em. A tent can get too big.)

So what accounts for these regional differences? Trump’s sparked a debate about whether his supporters are motivated by racial animus or economic insecurity. To some degree, this is a false dichotomy – people are more likely to scapegoat the “other” when their own lives suck.

But, as the graph below illustrates, we do see statistically significant differences in the degree to which working-class whites from different regions harbor “racial grievances.” It’s not a perfect correlation, but with the exception of the East north-central region, those in the most Republican-leaning parts of the country are more likely to hold negative views toward black people than those in the rest of the country. 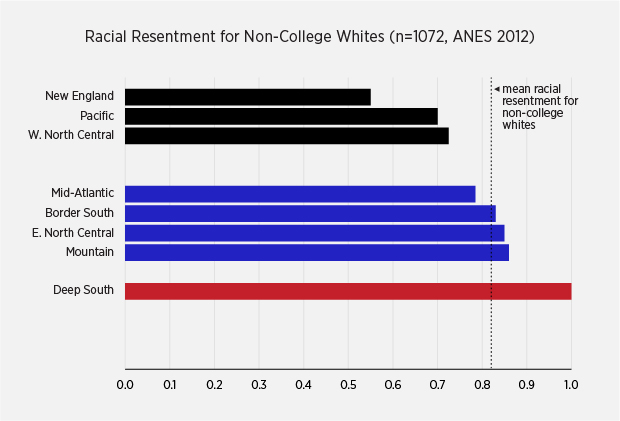 And this one looks at a series of survey questions designed to capture economic insecurity. Here, you can see that any regional differences are minimal. 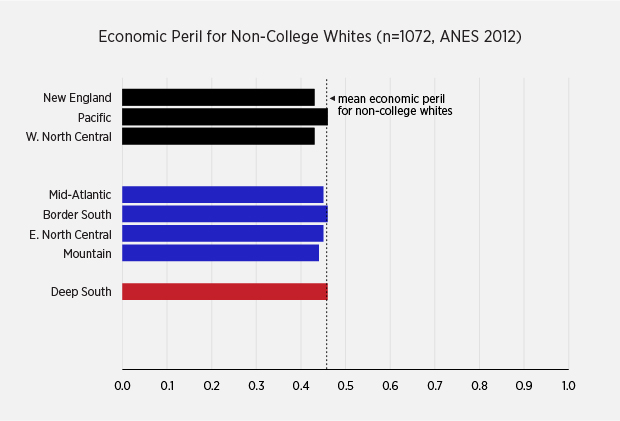 The fatal flaw in the notion that white working-class people may flock to Trump is that partisanship is fairly stable. Trump will no doubt do great with white right-wingers who didn’t go to college, but there’s no reason to think that large numbers of white working-class voters who identify as Democrats are going to have some kind of epiphany and embrace Trumpism.

In November, Trump will almost certainly win this group nationwide. He’ll run up big margins in the Deep South and Mountain states, and that will obscure the fact that Clinton did fine with non-college-educated whites in the North and on the West Coast. If anything, Clinton may well outperform Obama with this demographic simply because she has the great fortune of running against a doofus like Trump, and some nice Republican ladies who didn’t go to college may just decide to stay home that day.

The Associated Press fact checked claims made by Donald Trump in his immigration speech.