Dr. Robert Bullard had trouble selling a book in the late Eighties about what he knew to be true. He had written about a subject on which he’d long sounded the alarm: racism involving a sort of discrimination that is much more silent, a violence that doesn’t come via a policeman’s gun or baton. It doesn’t carry the dramatics of a cross burning on the lawn, nor make as many headlines as the racial disparities in America’s economic or medical systems. Bullard was trying to tell the world about the kind of racism that could come through our water taps, or just be floating in the very air that we breathe.

Perhaps the problem with the word “racism” is that it is singular and not plural. It is easier, then, to believe that it is one problem, and thus that there is one solution. Teaching Americans otherwise were campaigners and organizers like Bullard and the late Hazel Johnson, regarded by many as the father and mother of the environmental justice movement. Johnson, who died in 2011, pressured Chicago to remove asbestos and other toxins from poverty-stricken black neighborhoods; Bullard and his wife, attorney Linda McKeever Bullard, did much the same in Houston in 1979, where she sued Southwestern Waste Management for locating a garbage dump in one of the city’s middle-class black neighborhoods. Both the suit and the study that Robert Bullard paired with it were groundbreaking. Never before had an American company or city been challenged regarding its practices of toxifying neighborhoods populated primarily by black people or other residents of color.

Biden Promised a New Era for Immigration After Trump. How's That Going?

It has been 40 years since the book Bullard wrote expanding upon that study (and had trouble selling), Dumping in Dixie, was published. Now the author of 18 books, the former Texas Southern University professor finally sees a presidential candidate putting forth an environmental-justice agenda that encapsulates the goals he has been trying to achieve for decades.

“I think it captures a lot of the definition and the work that we’ve been doing,” Bullard told Rolling Stone about Joe Biden’s Plan to Secure Environmental Justice and Equitable Economic Opportunity. “Environmental justice embraces the principle that all people and communities are entitled to equal protection of environmental, housing, economic, transportation, energy, and civil rights — including voting rights.”

However, administration after administration has failed to sufficiently act on or even acknowledge environmental racism, and the toll it’s taken has been undeniable. A 2017 study from the NAACP and Clean Air Task Force found that because black Americans were 75 percent more likely than the average American to live in communities close to industrial facilities, they were 38 percent more likely to be exposed to polluted air than their white countrymen. “So when you talk about diabetes, asthma, heart disease, you name it — all these diseases and illnesses have environmental links,” Bullard says.

The disproportionate spread of Covid-19, a respiratory disease, among black, Indigenous, Hispanic and Latinx communities has been aided by these environmental factors, killing black people at a higher percentage than any other group in the nation. Yet of the nearly 100 environmental regulations Trump has reversed or is in the process of reversing, many of them — 26 — exacerbate air pollution and emissions. Black folks are out here living in American communities nicknamed “Cancer Alley,” and the current president made circumstances like that worse, on purpose.

It has been 30 years since the Environmental Protection Agency has referred so few anti-pollution cases to the Department of Justice. To boot, Trump’s re-election campaign’s “Platinum Plan,” a vague list of promises for black uplift, doesn’t address anything related to environmental racism. Nothing about industry pollution, or lead poisoning, or climate change.

Biden, on the other hand, seems to have listened to the young climate activists who’ve been demanding that justice be at the center of climate policy. “Right now, millennials and younger… that’s the new majority,” says Bullard, “emerging potential power that can make change and make change in a way that is transformative. Not little baby steps, not just having a racial justice statement on your website — but moving beyond that.”

Biden’s campaign revised its climate agenda in midsummer from the far more moderate proposal it released during the primaries. As part of a larger $2 trillion proposal to address climate concerns, it acknowledges that overlapping systems of oppression exist, and plans to build up the federal bureaucracy to properly address them. More than 55 years after the passing of the Civil Rights Act, we’re just now getting a plan from a presidential candidate that takes environmental justice seriously. 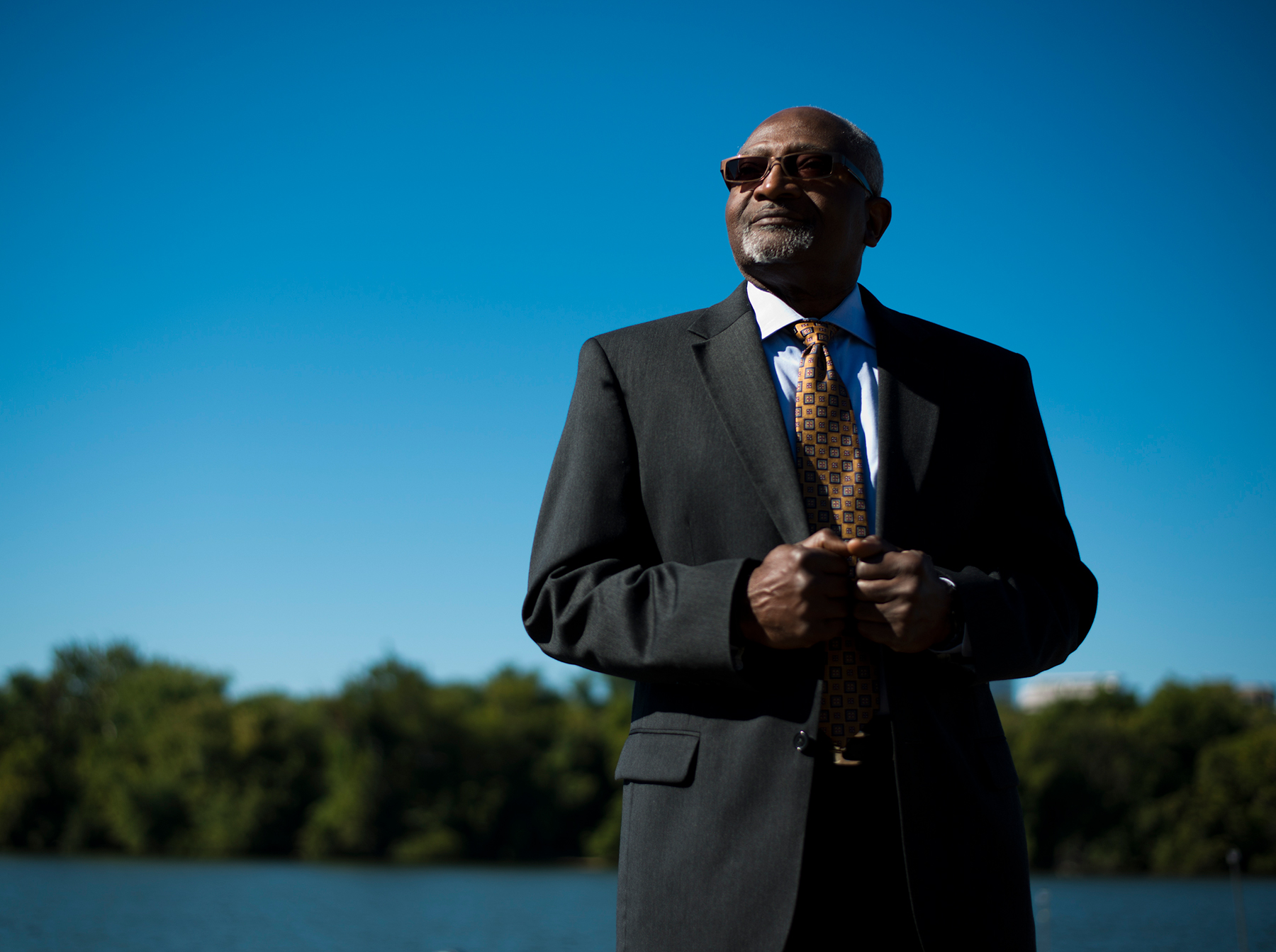 The Biden agenda pledges to direct 40 percent of his administration’s investment in “a clean-energy revolution” directly toward disadvantaged communities. This marks a decided reversal from Franklin Delano Roosevelt’s approach with the New Deal, which excluded black Americans from many of the benefits gained from an overhaul of American economics and industry.

Bullard was praiseworthy of what Biden’s plan terms the “all-of-government” approach. The Democratic nominee wants to establish an Environmental and Climate Justice Division within the U.S. Department of Justice, along with strengthening and overhauling key offices within the White House and EPA to support this work. The Biden plan also includes solutions that are “driven by data and science” (which, I guess, is both nice to know and staggering that he must tout that he’ll use a data-driven, scientific solution to an environmental problem. Thanks, Trump.)  Included among these new steps will be new monitoring of emissions and other toxins, and mandatory community notification for industries producing hazardous chemicals. However, there are some holes in the plan that stem purely from our history.

While Biden’s plan has many aggressive goals, there is still some room for improvement. There is no mention of black farmers within the proposal, for one. There are increasing environmental concerns confronting agriculture — including those forced by climate change — which all farmers are struggling with. Black farmers, who are disproportionately located in the American South, have to do that while contending with racial discrimination from the USDA and the continuing legacy of land theft, among other obstacles. As the entire industry attempts to confront this climate challenge, a White House environmental-justice plan needs to keep black farmers from falling further behind.

“I’ve done a lot of research on the rural South, especially around issues of employment and economic security, and it’s a glaring omission,” says C. Nicole Mason, CEO for the Institute for Women’s Policy Research, when I asked her about the need to address black farmers in Biden’s agenda.

The word “woman” or “women” also doesn’t appear in the Biden plan, and Mason noted that it needs a more thorough policy analysis regarding gender. Educating and empowering women and girls is actually one of the best tools we have to fight climate change, according to the climate solutions nonprofit Project Drawdown. “They’re also going to have to do some more thinking about how you bring in the most impacted around job loss,” she says. “And that’s women and people of color. And I’m not sure that his plan has a clear direction in terms of being able to do that.”

Bullard doesn’t think this Biden plan is perfect, either. He would like it to explicitly address training the next generation of environmental scientists, particularly through financial support of historically black colleges and universities. He also noted that it doesn’t address the fact that as natural disasters become more deadly due to climate change, the Stafford Disaster Relief and Emergency Assistance Act’s formula remains skewed towards white communities for relief funding. He referenced a 2018 study finding that in areas with at least $10 billion in damages, white communities gained an average $126,000 in wealth following the damage and recovery efforts while black, Asian, and Latinx residents saw their wealth fall by an amount between $10,000 and $29,000. Biden’s plan needs to address this, Bullard says, so that “we don’t end up with climate gentrification.”

The Climate Justice Alliance noted in July that Biden’s plan is “missing a comprehensive approach to addressing Indigenous sovereignty. The plan presently only references indigenous people once, when it notes that a Biden administration “will directly fund historic investments across federal agencies aimed at eliminating legacy pollution” in communities such as theirs.

“That’s a welcome critique and criticism,” says Rep. Donald McEachin, a black Democrat representing Virginia’s Fourth District, and one of the more passionate members of the House on the issue of climate change, pollution, and its disproportionate effects upon black and brown communities. “That’s how a plan becomes sharper, that’s how a plan becomes more defined, that’s how it can address the needs of the folks who are out there on the frontlines that really need the relief and the help that you’re trying to deliver.”

This past February, McEachin and Rep. Raúl Grijalva of Arizona introduced the Environmental Justice for All Act, which among other initiatives, would have fossil fuel companies paying to transition communities and workers out of “gas-dependent economies.”

McEachin, who endorsed Biden early, considers the former vice president the ideal champion for this cause, citing that Biden had introduced the first bill to address climate change in Congress, back in the 1980s, a fact that Biden himself has often mentioned in campaign speeches. “He has a heart for the environment,” McEachin says. “History has really met him in this time when we have this Covid crisis, this environmental crisis, intersecting. He’s uniquely suited to address both those issues, and to lead our nation out of the pandemic that we’re faced with.”

Meeting the challenges of this moment — with the intersection of so many crises coming to a boiling point —  will require thinking beyond the outdated notions of what qualifies as a “climate policy.” “The idea that climate policy alone is going to provide the support necessary for individuals and families to weather the energy transition is laughable,” says Rhiana Gunn-Wright, one of the Green New Deal’s architects and the Roosevelt Institute’s director of Climate Policy. “We need a stronger social safety net for that. For the foreseeable future, social policy is climate policy.”

Even if Biden wins, forging policymaking and politics to meet the moment will be an unprecedented challenge, when we have one party consistently and consciously working to make our literal environments more dangerous. And when it takes so much bodily energy to push even the people who are ostensibly on our side to listen to our concerns, and then to adjust their plans to our actual needs.

It is tempting, through my lens, to lose energy and hope. But then, I remember the long road trod by Dr. Bullard. He will be 74 in December, born just days before my father, and yet, his energy in this moment is boundless. Perhaps I should take a cue.

“The environment is everything. It is where we live, work, play, learn, worship, as well as the physical and natural world,” says Bullard. “And environmental justice, as we define it, doesn’t leave a whole lot out. This is the best opportunity that I’ve seen in decades to get the convergence of all kinds of policies and potential legislation [to further] environmental justice.”