The headline in the New York Times reads: “Sanders and Warren Meet and Agree: They Both Are Probably Running.”

At first, the story about Senators Elizabeth Warren of Massachusetts and Bernie Sanders of Vermont reads like standard election news. Dig deeper, though, and you find signs of negative media campaigns already beginning in earnest. Over the past few weeks, multiple outlets have published negative pieces about Warren in particular, deploying coverage gimmicks used to disparage candidates early in presidential campaigns before.

The gist of the new Times piece is that the Warren and Sanders, if they do run, “will not enjoy an easy path to the nomination.” Both are described as having political vulnerabilities that will force them to face questions or “concerns.” (This is code for, “they’ll get beat up by the media.”)

It’s way too early for this nonsense.

We’re 23 months away from Election Day. A baby conceived today will be celebrating its first birthday right around the time of the first general-election debate. From a betting standpoint, let alone an ethical or journalistic one, it’s beyond premature to be fretting about electability questions.

Bernie Sanders Talks Medicare for All in Light of COVID-19

In December 2014, news that Jeb Bush would “actively explore” a run for president put “the onus on all the other GOP candidates to get their ducks in a row — in a hurry,” according to the Washington Post. Bush ended up with three delegates, beaten soundly by one of the last candidates to declare.

Media critics like Adam Johnson of Fairness and Accuracy in Reporting (FAIR) have pointed out that early campaign coverage is often an absurd tautology. We get stories about how so-and-so is the “presumptive frontrunner,” but early poll results are heavily influenced by name recognition. This, in turn, is a function of how much coverage a candidate gets.

We do this with polls, but also narratives. Is Howard Dean “too liberal” to win? He is if you write 10,000 articles about it.

You’ll often see this “we think this because we think this” trick couched in delicate verbiage.

Common phrases used to camouflage invented narratives include “whispers abound,” “questions linger” and today’s golden oldie from the Times, “concerns” (as in, the prospect of Warren and Sanders running has “stirred concerns”).

Warren recently also has been hit with bad-coverage synonyms like a “lingering cloud” (the Times), a “darkening cloud” (the Globe) and “controversy” that “reverberates” (the Washington Post).

The papers are all citing each other’s negative stories as evidence for Warren’s problems. It’s comic, once you lay it all out.

The Boston Globe earlier this week wrote: “It’s been a rough few weeks for Warren’s White House hopes. Does it matter?”

The Globe cited an earlier negative article in the Times with the headline “Elizabeth Warren Stands By Her DNA Test. But Around Her, Worries Abound.” (“Worries abound” is another tired campaign-ism.)

The Globe cited the Washington Post article as part of Warren’s darkening “cloud.” Meanwhile, the Post article mentioned, as part of Warren’s reverberating “controversy,” an earlier editorial in the Globe. The Globe then mentioned its own earlier op-ed, the same one the Post referenced (“mix that together with an unflattering editorial from her hometown paper,” the Globe wrote, about itself).

The paper went on to conclude:

The media had ingredients for countless other stories painting a picture of a wounded Warren campaign — before it’s even gotten off the ground.

The article went on to describe a “candidate with a Hillary Clinton-like problem that just won’t go away.”

Why won’t it go away? Because we keep writing about it. The Globe euphemistically calls this a “media moment.” The actual term is probably “circle jerk,” but it’s a family paper.

The case of Warren is similar to the “Wimp factor” that dogged George H.W. Bush or Al Gore’s “Bore factor.” We create a media narrative, then challenge candidates to fight their way out of it.

The infamous “wimp factor” story in Newsweek led off with a tale about Bush’s college career as a light-hitting first baseman. It then declared Bush now “must show that he can hit political hardballs.”

Translation: we’re going to keep throwing this pitch, until you hit it out of the public conversation.

I don’t have any particular feelings about Warren, though I suggested her as a presidential candidate years ago. There is evidence she may not be the best campaigner. The DNA test probably was a political blunder, and the underlying issue is not trivial.

But Warren is the rare prospective presidential candidate with actual knowledge of how Wall Street works who is not a billionaire, a private equity chief or a bank lawyer.

She has something to say, which is what primary seasons are for. All informed policy ideas should be welcome. Moreover, campaigns ultimately are about how people respond to candidates, not how candidates deal with negative press. 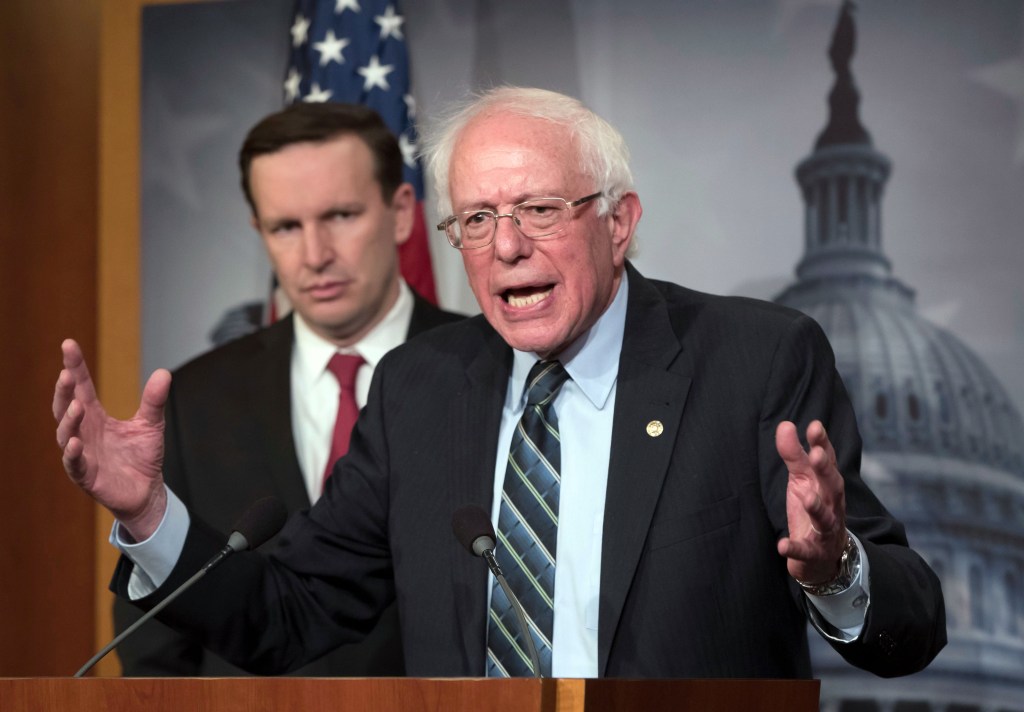 Sen. Bernie Sanders, I-Vt., joined at left by Sen. Chris Murphy, D-Conn., holds a news conference after the Senate passed a resolution he introduced that would pull assistance from the Saudi-led war in Yemen. Photo credit: J Scott Applewhite/AP/REX/Shutterstock

As for Sanders, the Times, which has a history of less-than-friendly history with this candidate, is also engaging in the invented-narrative game already with this in today’s piece:

Since running an unexpectedly competitive race against Mrs. Clinton… [Sanders] has struggled to expand his appeal beyond his base of primarily white supporters.

Gallup polls show Sanders actually has a higher favorability rating with nonwhite voters (64 percent) than he does with white ones (49 percent). The “white base” cliché may be a common trolling theme, but it would be nice if papers worked a little harder to check things like this against reality.

The frustrating thing about all of this is that the national press just spent two years praying for any president with the brains to stay off Twitter after midnight, avoid talking about “fine people” at a racist marches and eschew flirting with reporters during diplomatic calls. Yet they’re already inventing frivolous reasons to toss people with good ideas out of the race.

A recurring theme in coverage of the presidency in the Trump era is a newfound discovery that the job is a profound and awesome responsibility. It turns out that in a presidential candidate (here’s a tautology for you), the only qualities that matter should be qualities that matter.

We shouldn’t be making up fake obstacles for people who can do the job, especially not this early.