I told Cory Booker’s team before our arranged meeting time in San Diego that a black man who is running for president of the United States, standing six-foot-two, would stand out anywhere. But this is Comic-Con, and Comic-Con tells me that I am overconfident. The hotel lobby where we need to meet is a freeway of cosplay. I wonder, for half a second, whether he is in disguise.

It is Friday, and the biggest American event in nerdiness has been up and running for more than a day now. I say that with love; I was here last year, moderating a panel and eating up all of the cultural product that I have loved since I was a boy: the movies, the comics, the Star Wars, Star Trek, every bit of it. So has the Senator from New Jersey, who at 50 years old is getting his first crack at the annual mid-July weekend festival that regularly attracts around 135,000 fans, press, and industry professionals to the tip of southern California.

I find Booker, wearing not a cape but Weekend Candidate garb: blue blazer, white oxford, blue jeans, and a smile. He is freshly arrived from a cross-country flight, as if that is even possible. Booker is about to burst, wearing the expression of a grade-school kid on a field trip who sees the amusement park through the school bus window. California may now be a Super Tuesday state, but you can tell how excited he is for this. The second debate is next week, dude. Somewhere, there is a Klingon and a Jedi and a Tardis to see. Booker’s body is ready for Comic-Con.

“My campaign manager calls me up and says, ‘I have some of the greatest news ever,’ and I’m like, ‘Oh, my God, what happened? Did Oprah endorse?’ He says, ‘We’re gonna make time for you to go to Comic-Con.’ And for me, it was like Christmas,” Booker recounted shortly after we meet up. He looks through a window from an overlooking office and opens his present, getting his first look at the jam-packed Comic-Con exhibition floor. You could almost see him collecting his jaw and eyeballs off of the tops of his black wingtips.

This is all fun to witness, because I was right in those same (metaphorical) shoes last year. But in a different way entirely, I am wondering what Booker is thinking.

Despite putting forth some of the boldest criminal-justice proposals of any Democratic candidate for the presidency, he is polling consistently in the low single digits. He is the only (major) black male candidate in a party increasingly swayed by black voters, and early-state activists reportedly like him — yet he regularly polls about the same as someone named Andrew Yang and is watching his rivals for the Democratic nomination start to hit warp speed. The Iowa caucuses aren’t happening for another 199 days from that Friday in San Diego, granted. But why is a guy in his position spending any time at Comic-Con during a presidential campaign?

From the moment Booker steps into his first Comic-Con, he is on in every way: as a politician, certainly, but also as a sci-fi geek. He seems to absorb every detail he can of the various comic-book and video game booths that we pass, as well as noticing all the various artists hawking their work. The senator welcomes interaction with the fans and press on the San Diego Convention Center floor, taking selfies with virtually every approaching conference goer (costumed or not) and takes special time with one of his New Jersey constituents to do a livestream on her phone.

Guided through the floor by a tour guide and security, Booker gets to see two exhibits: the “Star Trek Universe” and the NASA station, where a VR headset gives him the feeling of walking on the Moon 50 years after the first landing. The press, gaggled with their cameras and microphones, all but follow him past the door and into the mock Star Trek beaming pad when he goes to get transported to the USS Enterprise.

He eventually fields questions, doing media interviews on the floor and a few outside. He’s asked first about President Trump’s racist remarks about Booker’s four Democratic colleagues in the House, Reps. Ilhan Omar, Alexandria Ocasio-Cortez, Ayanna Pressley, and Rashida Tlaib. If “the times dictate the demands of the office,” as he tells me, then the times demand an anti-racist president of the first order (not that First Order). The fascist mob chant of “Send her back!” at President Trump’s Greenville, North Carolina rally last week — directed at Rep. Omar, a Somali refugee naturalized as a U.S. citizen during her teens — will hardly be the last such outburst, and there are still legions of undocumented immigrants being treated like vermin in detention camps. I haven’t even touched the systemic racism Booker is attempting to address with recent initiatives like his plan to have elder inmates released if they do not present a threat. (Booker also emphasizes that issues such as housing and environmental injustice have not gotten nearly enough attention in this election cycle.)

It seems that in this political climate, though, the president Booker wants will need to have superpowers. “I really believe this next president’s going to have to be a healer,” he told me. “I think we need a president that’s good at weaving back the fabric of our country about reminding us of our common cause and common purpose.” He likens Trump to famous Jim Crow villains— ”every generation’s had them; I don’t think that [Trump’s message] speaks to us as a country as much as how we choose to respond to that.”

But the senator, ever the optimist, tries to see a metaphor in the day’s events. When I ask him whether the people he meets on the trail, much like he did on the convention floor, truly understand the job that he wants, the Senator tells me that “we all in our lives are heroes to each other. We are each other’s hope. We elevate each other. And I think that every president has a chance to reimagine what a president is.”

After his Comic-Con tour, Booker steps into the back of a giant hall to see a few minutes of preview footage for the long-awaited Dark Crystal sequel, then leaves the convention center on foot to head into San Diego’s Gaslamp Quarter, running a bit behind for an interview with an entertainment outlet. He calls his campaign, which has yet to gain any significant momentum of the kind some of his competitors have enjoyed, a “slow growth” campaign and looked forward to the July 31st debate in Detroit, where he drew a matchup with his friend and colleague Kamala Harris and former Vice President Joe Biden, whom Booker notably criticized for his recent celebration of his past work alongside segregationist senators.

Booker downplayed the hype of the matchup. (That doesn’t mean that there isn’t any. Four days later, Booked would blast news of Biden’s new criminal-justice initiative, meant to ameliorate the injustices of the former vice president’s own 1994 crime bill, by subtweeting him: “It’s not enough to tell us what you’re going to do for our communities, show us what you’ve done for the last 40 years. You created this system. We’ll dismantle it.”).

He did emphasize, as he had repeatedly during the first debate, he would be sure to keep reminding voters of his Newark roots. “I spent my entire adult life working in cities, and working in low income communities. My entire professional career has been taking on the toughest problems in this country. It also is what guides me. It’s why I got into politics,” the senator told me as we walked past Star Wars stormtroopers, Harley Quinns, and other assorted comic book and movie devotees on a sunny Fifth Avenue. “I lived in these projects for about eight years and a woman told me, ‘Don’t ever forget why you got into politics and who made it possible.’” 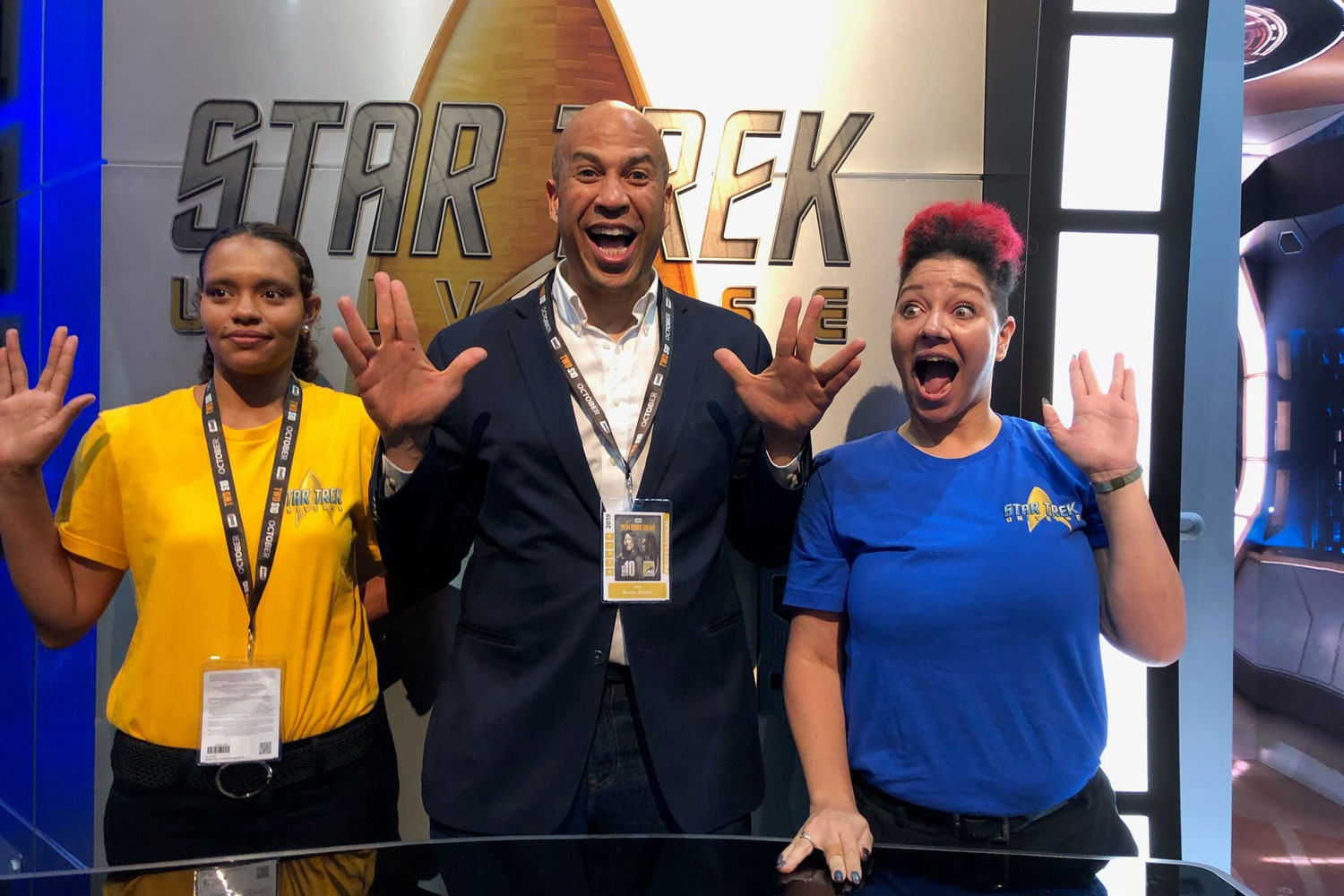 We know why Booker got into politics, but why is he in San Diego, beaming as he gives the Vulcan greeting with the Star Trek staff?

After a week of being asked about everything from why he’s running to the president’s racism, Booker does seem happy to relax for a few hours before heading to Los Angeles and engage fans about a different kind of leadership. Asked by a supporter who his favorite Star Trek captain was, the bald-headed Booker shouted, “[Jean-Luc] Picard; he’s got the best haircut!”

Booker can fill no role but the Candidate here, complete with the dad jokes, and in that way I feel a bit sorry for him. Not because of the corniness; heaven knows I can be guilty of that. It is because Comic-Con is where people come to both be their fullest selves who they cannot be in public life and to hide somewhat, obscuring their faces behind intricate makeup and masks? It may sound contradictory, but that is the culture here. In his own way, Booker is the exact opposite: He is visiting the festival when he can’t afford to truly be everything he is, because of politics, and his celebrity (and his height) makes it impossible for him to go unnoticed.

That said, my sympathy is limited. I’m skeptical that he’s really just there to enjoy it. He is running for president of the United States, and therefore by definition, one of the most ambitious people on the planet. He and I spoke about how none of the other recent Democratic nominees, perhaps Hillary Clinton aside, were considered the favorite this far out in the race. Going to San Diego for Comic-Con is some Captain Kirk shit, a bold choice that might get your crew killed for making it but also might see you look like a badass in the end. Go where no politician has gone before.

But I understand, from having just covered one of his Senate colleagues and competitors, that while being a presidential candidate isn’t working in the coal mines or some other form of menial labor, it does take its toll. Running to be the second black president after seeing what Trump did to the first one is no easy task, either. Folks need a break.

So why is he here?

“I grew up with a father whose life was changed by movies,” the Senator told me of Cary Alfred Booker, named for Grant and Hitchcock, respectively. Booker said that his late dad became one of IBM’s first black salesmen after being inspired by a film featuring a salesman character that he saw while sitting in a segregated movie house. But the genre that the elder Booker, who died in 2013, loved the most was science fiction, especially Gene Roddenberry’s multiracial vision of the future. “I still remember him sitting me down and saying, ‘This is Star Trek, and you are going to watch this with me.”

Booker then reminds me that the first Star Trek convention in history was held in Newark’s public library in 1969. He is giddy, as he often is, but this is somehow different. I can tell that he is thinking of his dad, those times when Kirk and Spock brought them together, as they did for so many fathers and sons. Present company included. Perhaps the presidential candidate came to Comic-Con to try to be like the rest of us, if only for a few minutes: to escape into that world of fantasy that helped us discover so much about the world, and ourselves.