Like so many in the wake of the 2016 election, journalist Ben Bradlee Jr. wanted to know what the hell just happened. So he spent the next 14 months of his life traveling back and forth to interview the people of Luzerne County, Pennsylvania, which, he argues, proved to be the most pivotal electoral district in the country.

“I was looking for a different angle and curious to learn more about the great divide,” Bradlee says. “After going through the vote in the three critical swing states — Pennsylvania, Michigan and Wisconsin — I discovered that in this county in Northeast Pennsylvania, a traditionally Democratic stronghold that hadn’t voted for a Republican since 1988, Trump piled up such a margin that it was 60 percent of the margin by which he won Pennsylvania. He won the state by only 44,000 votes, and 26,000 of those came from this one county. So I started poking around, going micro to get macro.”

Bradlee’s excellent new book, The Forgotten: How the People of One Pennsylvania County Elected Donald Trump and Changed America, is the result. In a deeply reported portrait of what led so many white working-class voters to back a candidate who in previous generations would have been unelectable, Bradlee offers a grim picture of a people and place — and the reader walks away more convinced that Trump is a very nasty symptom of a country suffering from more than one malady. 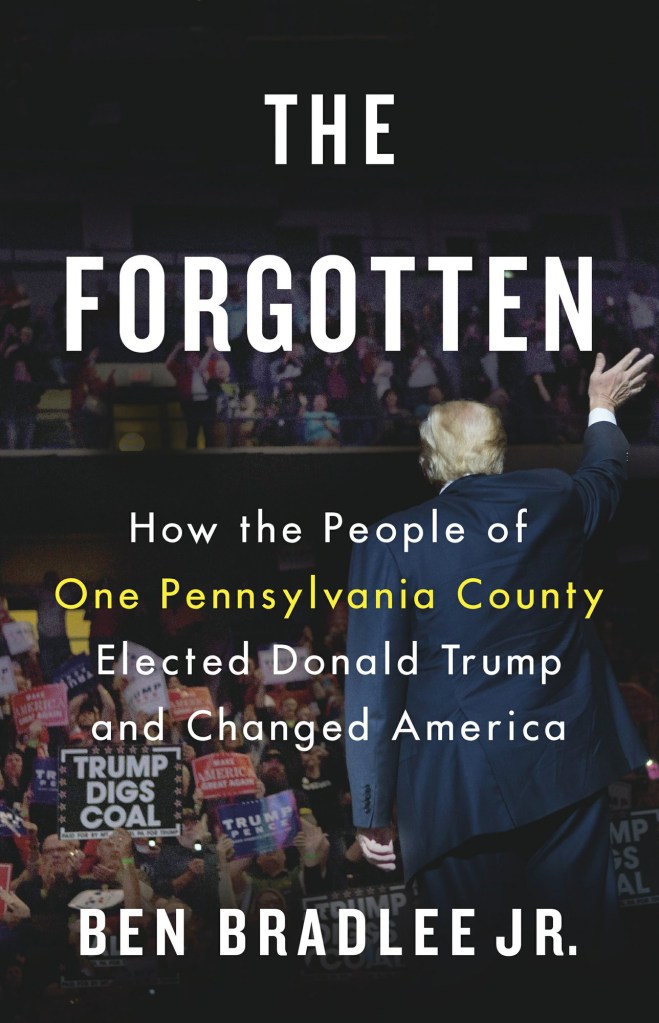 The book is a series of profiles of Trump voters, a field of inquiry that has come under criticism of late. Who wants to read about the “deplorables,” the refrain goes, when their president is running amok on a daily basis – separating families at the border, cutting taxes for the rich, blowing racist dog whistles, polluting the environment and peddling dangerously divisive rhetoric. But that is precisely Bradlee’s point: We have to care. “We’re all Americans,” Bradlee says. “They say you fall in love with your therapist because you feel listened to, and these people felt listened to by Trump and they felt ignored by Hillary. It came down to that. Somebody called this book ‘Listening, Reporting,’ and that’s sort of what I tried to do.”

Inside the Bizarre and Dangerous Rod of Iron Ministries

Interwoven with the profiles, Bradlee traces the history of the area, from thriving industrial hub to shuttered and crime-ridden main streets. “The young people are leaving the county. There is no future there, so it’s economically depressed and it’s fraying at the edges,” says Bradlee, who led the Boston Globe’s Pulitzer Prize winning coverage of the Catholic Church sex-abuse scandal and is the son of the late legendary Washington Post editor Ben Bradlee. “It’s difficult to find hope there. But Trump somehow gave these people hope. He would say, ‘We’re going to get clean coal, it’s going to come back.’ I don’t think they really believed him but they like the sound of it.”

In Luzerne and its depressed cities of Wilkes-Barre and Hazelton, Bradlee found people seething with anger for the establishment. “They feel disrespected,” he says. “A lot of it was an F-you vote. They like how Trump gets up every morning and starts kicking the shit out of the media, the Democrats and bashing the elites. Ultimately, it’s style over substance.”

And based on his reporting, Bradlee sees no buyer’s remorse among Trump voters. “They’d enthusiastically vote for him again,” he says. Though not without personal cost. In one of the most poignant moments of the book, a Trump-loving grandmother becomes estranged from her liberal grandson, who lashes out at her for supporting the president. “It’s heartbreaking,” Bradlee says, “and Trump is the catalyst. He’s divided families and friendships.”

The Forgotten also breaks some new ground in the story of 2016. Bradlee spends many pages profiling an early and crucial Trump supporter, the Luzerne congressman and hardliner on immigration Lou Barletta. It turns out during the tail end of the campaign, a depressed Trump, down in the polls, wanted to pull out of Pennsylvania entirely but Barletta convinced him otherwise.

Here’s Barletta’s recollection from The Forgotten: “[Trump] was serious. He was down six and sliding and maybe we should focus on other states. He said it matter-of-factly. I think he wanted to see my reaction. He always wants to know your opinion. He always made me feel like my opinion mattered.”

Barletta made an impassioned case directly to Trump to fight on in Pennsylvania.

“I pleaded with him not to pull out and I assured him that the polls were wrong,” Barletta recalls in Bradlee’s account. “I said Hillary would not win the southeastern part of the state around Philadelphia by the same margin as Obama did, and that northeastern Pennsylvania was how he was going to win. I said, ‘You will win in the northeast by margins you’re not going to believe.’”

Barletta convinced Trump and then-Trump campaign chairman Steve Bannon to stick it out, and history proved him exactly right. “Barletta knew his region,” Bradlee says. The irony for Barletta is that now he’s down double digits in the polls in a Senate race against Bob Casey, and may be a victim of anti-Trump fervor in the midterms.

In terms of a presidential election, Bradlee isn’t so optimistic for the Democrats as a whole, however. “The Democrats don’t have enough of their own ideas beyond hating Trump,” Bradlee says. “They have to have more of their own platform and perhaps most of all, they have to learn to listen more than they do. The country is so polarized that I think there is money for a Democratic candidate for president who would run on trying to unite the country. Something Trump has no interest in doing. It’s clearly a leadership issue. But appealing to people’s better angels rather than their worse angels is ultimately the right thing to do.”