Journey to Antarctica: An Emergency at Sea - Rolling Stone
×
×

This is the sixth dispatch in a series from Jeff Goodell, who is in Antarctica investigating the effect of climate change on Thwaites Glacier.

On February 15th, in the middle of the Amundsen Sea off the west coast of Antarctica, we suddenly faced a potential tragedy aboard the Nathaniel B. Palmer. Not long after I grabbed my first cup of coffee in the mess hall, I ran into Rob Larter, the chief scientist on the trip. We were three weeks into a seven-week-long cruise to investigate the risk of ice-sheet collapse at Thwaites Glacier, one of the most important tipping points in the Earth’s climate system. I could see by the look on Larter’s face that something was wrong. “We’ve had a medical emergency on the ship,” he tells me.  “We’re turning around and heading to Rothera so we can get the person to a doctor and a hospital as quickly as possible.”

Report: Plastic May Soon Overtake Coal as a Climate Killer

A Quarter of the Nation's Critical Infrastructure Is at Risk of Flooding. It's Going to Get Worse

Rothera is the British Antarctic Survey’s base on the Antarctic Peninsula. It would take four days to get there. Although the person was in stable condition, doctors who had been contacted by the ship’s emergency medical technicians recommended the person be rushed to a hospital as quickly as possible. And when you’re at sea in Antarctica, where we were far beyond the range of helicopters, as quickly as possible meant four days of plowing through sea ice at 13 knots for 1,000 nautical miles.

For understandable privacy reasons, the person’s name has not been publicly disclosed. Even here on the ship, where everyone knows who the person is, there is a tone of respectful privacy around the hour-by-hour medical developments. There are no doctors on board, but the EMTs in the ship’s four-bed hospital are able to administer drugs and perform other procedures at the direction of a doctor (usually via satellite phone).

We are a long way from anything, in rolling seas at the western edge of the most remote continent in the world, doing our best to save the life of a sick colleague. Our science mission has, for the next few days, turned into a rescue mission. You could actually feel the mood on the ship swing as the ship turned around. We were all concerned for our sick shipmate, of course. But the scientists were also concerned about what eight days of lost research meant for their projects, many of which they had spent years preparing for. Over the ensuing days, to fill the time, scientists and crewmembers watched for emperor penguins from the bridge, called relatives at home on the sat phone, organized “sauna socials,” and watched Game of Thrones on the big TV in the ship’s lounge. A ship-wide ping-pong tournament even got underway (it’s extra challenging when the ship — and the ping-pong table — are rolling with big ocean swells).

But the real center of gravity has been food. On a trip like this, when it stays light for 24 hours and scientists are working around the clock, meals become the metric of the day, how you gauge the passage of time. On the Palmer, meals (including mid-rats, nautical slang for midnight rations) are served in a mess hall that looks like a cross between a high school cafeteria and a 1950s diner, with Formica-topped tables and stools with chrome metal bases that are fixed to the floors (so they don’t slide around in rough seas). Walls are lined with romantic photos of the Palmer breaking through Antarctic ice (“ship porn,” a friend commented), and there’s a scale model of the Palmer in a plastic case.

The grub is not going to win any culinary awards, but it’s surprisingly good, especially when you consider that four cooks are responsible for putting out four meals a day for 57 people. Today it is do-it-yourself burritos with ship-made guacamole. Yesterday is was fried fish. The day before, spare ribs. There is always some kind of vegetable dish, rice, beans, soup and a salad bar with iceberg lettuce (the source of much whining from the spinach-and-arugula faction), cut up kiwis, melon and grapes. And on special occasions, the galley staff goes all out. On Valentine’s Day, Jack Gilmore IV, a 23-year-old cook on the ship, made a Mardi Gras-inspired king cake in the shape of a heart, which tasted like a fresh cinnamon roll. Gilmore, who is from New Orleans, brought the cake out into the mess hall around midnight, and about a dozen of us gathered around to grab a piece while it was still warm. It was spectacular. 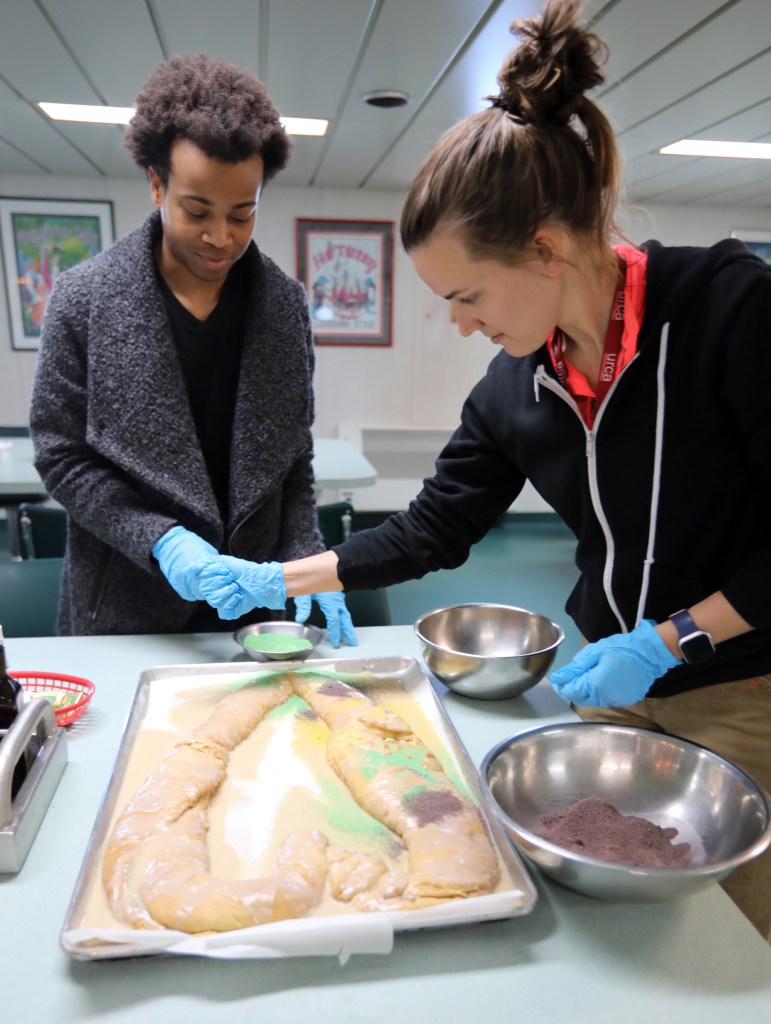 Meals are the only time and place on the ship where everyone gathers at once — the scientists, the support staff, the captain, the mates, marine techs, the oilers. Everyone comes in their work clothes, grabs a plate, fills it up, and sits down to eat and discuss the day’s events. It’s especially important now, as we work through the worry about the well-being of our shipmate. But as is often the case in times of trouble, we also distracted ourselves by talking about other things. At breakfast this morning, I chatted with German scientist Lars Boehme about how the seals we tagged the other day are doing (excellent — 800 dives logged in three days), and with Jennie Mowatt, a marine tech from Washington state, about managing 12-hour work shifts at sea, and with Gui Bortolotto, a scientist from Brazil who was unlucky enough to draw Jack Greenberg, a marine tech who is known to have a particularly smashing ping-pong game, in the first round of the tournament.

Last night after dinner, I hung out in the galley with the chef, Julian Isaacs. He’s from Jamaica, 41, with four kids in Florida. He gave me a tour of the food that’s stored on the ship — it’s like a grocery store at sea. Dry goods are stored in the bow, with everything from Trix cereal to tortilla chips secured on wooden shelves. When we are breaking ice, the noise in this room is so loud you have to cover your ears. In the cold storage area, there are boxes of ripe tomatoes, shriveled ginseng, browning bean sprouts and lots of iceberg lettuce. Isaacs talks about tricks to preserve fruit and vegetables on a long journey — how you have to pick the old leaves off the lettuce when it goes brown to preserve the fresh stuff underneath, and how you don’t want to store the tomatoes too close to the bean sprouts, because they both give off heat and will cause the other to mildew and rot. He leads me into the walk-in freezer, which is the size of a small hotel room, where boxes of frozen meat and chicken and fish are stacked to the ceiling.

“What is the biggest problem you have storing food for seven weeks?”

“Oh, the fresh fruit and vegetables,” he says.  “We try to keep them as long as we can. But at a certain point, we have to start using frozen vegetables and fruit.” As we tour the freezer, he points to a big box of frozen blueberries. “It’s not as good. But at least they are something.”

“Do you have a meal plan for each day?” I ask him.

“Basically, but then I come in every morning and just cook what inspires me,” he says. 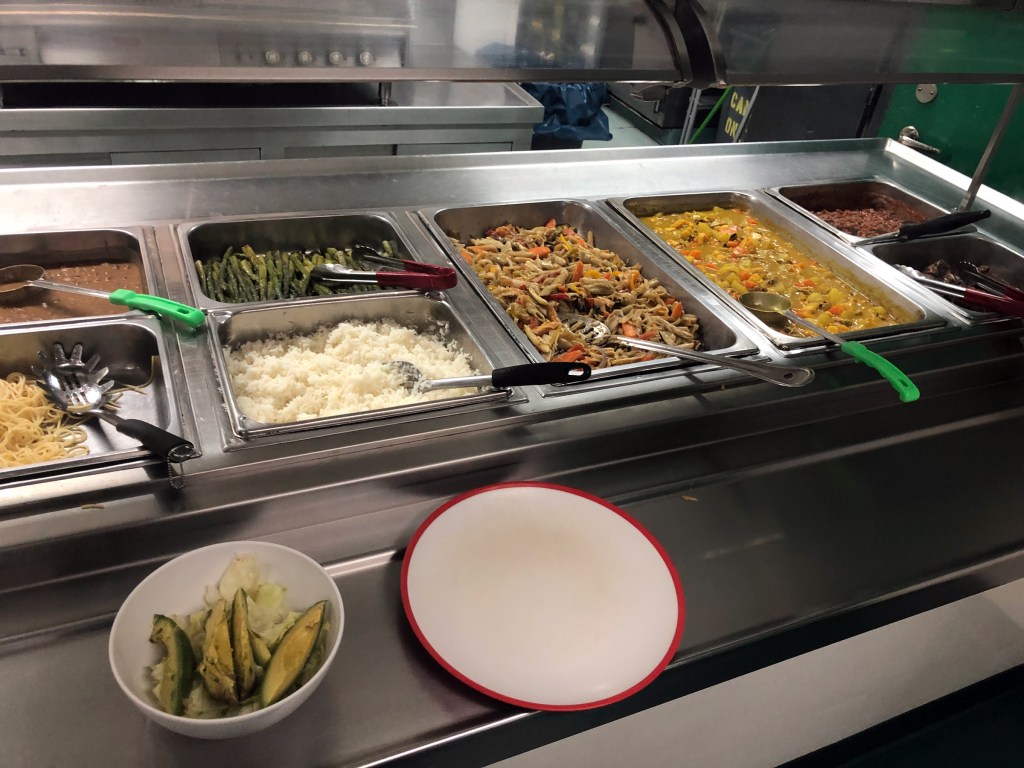 The other day, what inspired him was to grill about 30 steaks outside on the helicopter deck. It was -10 degrees F with wind chill. He was out there with his chef hat and no gloves. The crew members below gave him a big cheer.

“On a trip like this, you have to keep changing things, or people get bored with the food. So I do Mexican one night, then Chinese, then Italian. A little something for everyone.”

Many crewmembers who’ve work on science cruises to Antarctica tell me that when the food quality drops, so does the morale. “When you go to the salad bar and all you see are five kinds of meat, people start to get cranky,” one crewmember tells me. Several scientists have noted that liquor is allowed on research vessels operated by most other nations. Ships flying under the U.S. flag, however, such as the one we’re on, are dry. Which is not to say that a bottle of whiskey has never been smuggled aboard a U.S. research vessel.

“You might be the most important person on the ship right now,” I tell Isaacs.

He smiles and says, “You have to have good food. If you have good food, you can get through a lot of troubles.”  Right now, everyone on board is counting on that.